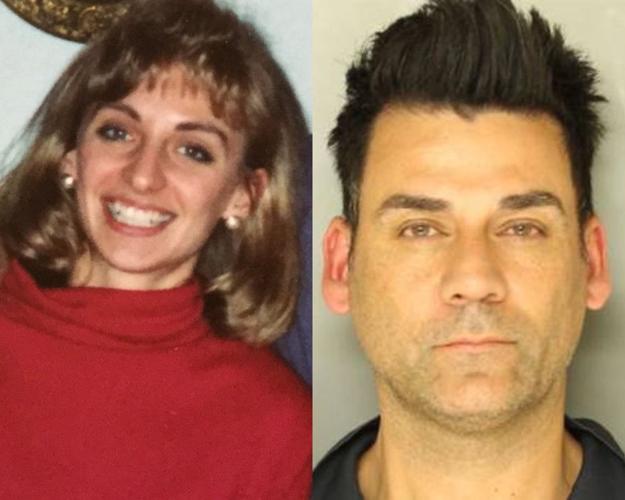 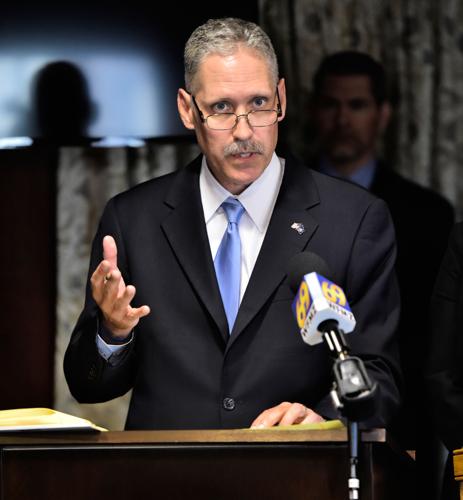 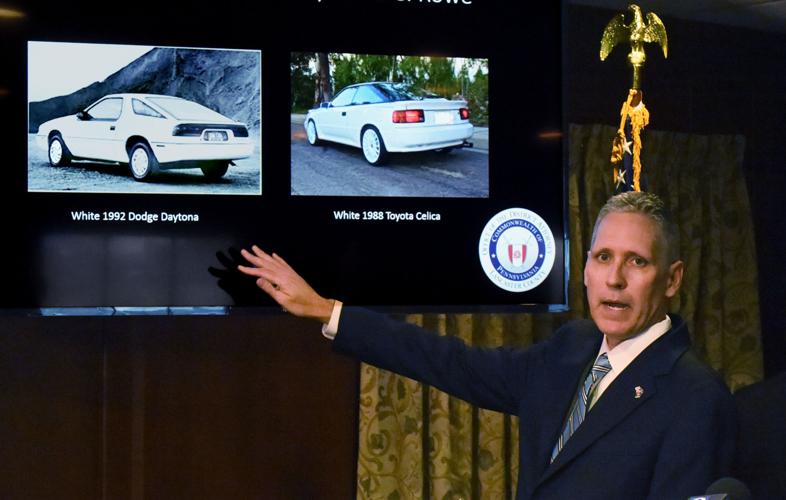 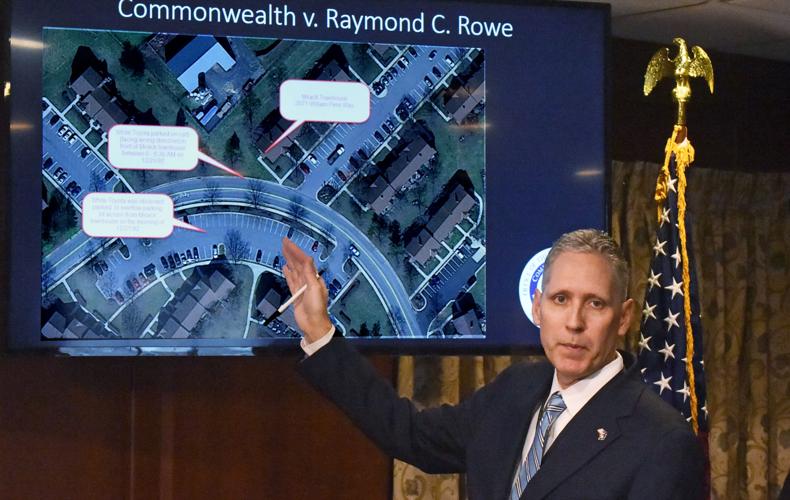 Lancaster County District Attorney refers to an aerial view of the apartment complex where murder victim Christy Mirak lived in 1992. during a news conference in the Lancaster County Courthouse Tuesday, Jan. 8, 2019. Ray Rowe, of Lancaster, pleaded guilty to the 1992 murder of school teacher Christy Mirak.

Lancaster County District Attorney refers to an aerial view of the apartment complex where murder victim Christy Mirak lived in 1992. during a news conference in the Lancaster County Courthouse Tuesday, Jan. 8, 2019. Ray Rowe, of Lancaster, pleaded guilty to the 1992 murder of school teacher Christy Mirak.

Raymond Rowe never raised a whisper of suspicion during the 25 years he built a DJ business with gigs throughout Lancaster County and beyond.

But Rowe, 50, stood before a judge Tuesday and admitted he raped, strangled and killed 25-year-old schoolteacher Christy Mirack on Dec. 21, 1992. The killing happened in Mirack’s Greenfield Estates townhouse in East Lampeter Township as she was getting ready to go to work.

Homicide investigators last year developed Rowe as a suspect after crime scene DNA matched DNA that one of Rowe’s half sister uploaded to a public genealogy database.

Without that hit, Rowe would likely have gotten away with murder.

“To the Mirack family, I can’t imagine what you’re going through. I apologize,” Rowe said, his voice shaking, after turning to face the victim’s father, brother and sister.

Instead, Lancaster County President Judge Dennis Reinaker sentenced Rowe to life in state prison without the possibility of parole for murder. Rowe was sentenced to another 60 to 120 years for the other crimes.

District Attorney Craig Stedman in court said DNA and other evidence tied Rowe to the crime.

Rowe’s white Toyota Celica matched the description of the car that Mirack’s neighbors saw parked near her apartment the morning she was killed.

And Rowe in 1992 lived in Lancaster city and worked at ServiceMaster on William Penn Way, just down the street from Mirack’s home.

The commute would have taken him past her home hundreds of times, perhaps when Mirack and her roommate were sunbathing, Stedman said at a news conference after the guilty plea.

Stedman said police received at least least three peeping Tom reports near the apartment in the months before the murder.

Mirack and Rowe also could have crossed paths in social circles. A ticket to the Chameleon Club, a Lancaster nightclub where Rowe worked, was found in Mirack’s wallet.

But nothing said at the guilty plea hearing or news conference explained why Rowe targeted Mirack, who taught sixth grade at Rohrerstown Elementary School.

“I spent 25 years watching my family plead for answers,” Vince Mirack, the victim’s brother, told the judge as his father, Vincent, wept. “I made a promise to my mom before she passed away to never let this go.”

Mirack’s sister, Alicia, leaned against her brother as he struggled to contain tears.

Mirack spoke of Christy’s kind heart, her passion for teaching and her hard work to prepare for her career.

“You took it away with no regard,” Mirack said. “I can only hope the remainder of your life is as painful to you as the last 26 years have been without her to my family.”

A slight, dark-haired man with a neat, salt-and-pepper beard and wearing a light gray suit, Rowe pressed a tissue to his eyes.

Offered an opportunity to address the court, Mirack's father, Vincent Mirack, collapsed in tears into his daughter's arms, saying, "I can't talk. I can't talk."

Rowe’s attorney, Patricia Spotts, told the judge that Rowe admitted at their first meeting that he killed Mirack and was ready to accept the consequences.

“There is nothing we can say to make the community feel better about this case,” Spotts said, other than that her client chose to not put both his and the Mirack family through the stress of a trial.

“He has always believed the proper thing to do is to take this plea,” she said.

Spotts said she consulted legal experts about the novelty of evidence gathered through a DNA ancestry website. She said she and co-counsel David Blanck concluded Rowe’s privacy was not violated when a half sister, who he did not know, made her DNA public to learn her genetic heritage.

Several extra seats were brought into the wood-paneled courtroom to accommodate all of the spectators. They included Rowe’s wife, Elena, and about 10 others there for Rowe. Other spectators included over a dozen law enforcement officials and members of the media. Five sheriff deputies kept watch.

At the news conference, Stedman said that after his arrest Rowe denied committing the crime and knowing Mirack.

“He basically said, ‘I think I heard about the case,’” Stedman said.

In describing the fatal attack, Stedman said Mirack fought for her life.

She suffered a broken jaw and prolonged strangulation with Rowe using his hands and the victim’s sweater to constrict her throat.

Stedman said Rowe forced his way into Mirack's apartment after her roommate left for work around 7 in the morning.

The evidence of struggle included the wrapped presents strewn around the room. Mirack was preparing to take the gifts to school for her pupils and staff.

Then Rowe “went back to his life in the community, and he enjoyed it,” Stedman said. "He lived free. He lived well."

And he remained free for longer than his victim had lived.

He worked for 15 years at the Chameleon Club and transitioned to a career of headlining scores of parties and events each year. Meanwhile, he earned a high school equivalency diploma and went through three divorces. He married a fourth time — to a Ukrainian woman named Elena — six years ago.

Only a few months before the slaying, Rowe was a co-organizer of a “Stop the Violence” rally on Lancaster Square.

Detectives said Rowe was never on their radar. They interviewed and reinterviewed scores of potential suspects over the years, but were stumped until the genealogy website secured a hit.

Even the FBI was no help. Their profile specialists in the 1990s had theorized that Mirack’s killer was likely someone who wouldn’t be the life of the party.

But what traditional police work couldn’t solve, science did.

The county detectives’ first shot at using DNA didn’t help. They contracted with Reston, Virginia-based Parabon NanoLabs in early 2017 to create images of what the killer might look like based on crime scene DNA. Release of those images to the public in October 2017 led nowhere, even though the likeness proved to be close.

But then Parabon was tasked with running the DNA sample through a public genealogy database. The resulting hit developed Rowe as a “strong viable suspect.”

Undercover detectives went to work. They kept Rowe under surveillance and collected Rowe’s DNA from used chewing gum and a Kirkland water bottle he discarded while headlining a party at Smoketown Elementary School for sixth graders moving on to middle school.

Police took Rowe into custody without incident June 25 at his 249 Whittier Lane home.

'She had the biggest smile': Former students remember Christy Mirack as a fun, passionate educator

Genealogy DNA may convict in Christy Mirack slaying, but was the search lawful?

Behind the science: What to know about the DNA analysis that led police to Rowe

Who is Raymond 'DJ Freez' Rowe, the man charged with killing Christy Mirack in 1992?

Woman who dated alleged killer Raymond 'DJ Freez' Rowe asks, 'Why not me?'

'We needed this': Principal, students and others find relief in knowing Christy Mirack's killer; some ask 'Why?'

Here's a look at the most-read stories on LancasterOnline.com between Jan. 7 and Jan. 13.

The man who sexually assaulted and killed schoolteacher Christy Mirack in 1992 pleaded guilty, closing the door on a murder case that went uns…

Chameleon Club documentary made free to watch on YouTube by director

On Friday, documentary director Allen Clements made his 2011 film on the legacy of the Chameleon Club free to watch on YouTube.

When Eric Schubert was a boy, he endured bouts with asthma that made him prone to pneumonia.

Raymond Rowe, who is trying withdraw to his guilty plea for the 1992 rape and murder of Christy Mirack, now claims to have met the schoolteach…

DNA evidence helped put Raymond Rowe in prison for life in the 1992 rape and murder of school teacher Christy Mirack nearly 29 years ago.

Raymond Rowe, the once-popular entertainer known as DJ Freez, has lost his bid to have DNA testing done on items used to murder teacher Christ…