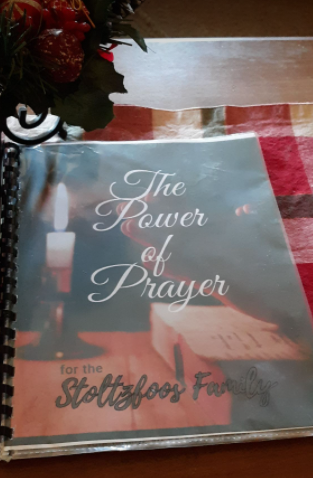 A prayer book created by Lori Ann Gosha, of Tennessee, and Vickie Rowe Grimes, of Virginia, for the family of Linda Stoltzfoos, 18, of Upper Leacock Township, who has been missing since June 21, 2020. Grimes mailed the book to Stoltzfoos' parents on Friday, Dec. 18, 2020.

A prayer book created by Lori Ann Gosha, of Tennessee, and Vickie Rowe Grimes, of Virginia, for the family of Linda Stoltzfoos, 18, of Upper Leacock Township, who has been missing since June 21, 2020. Grimes mailed the book to Stoltzfoos' parents on Friday, Dec. 18, 2020.

Lori Ann Gosha and Vickie Rowe Grimes are friends who for months have talked nearly every day — even though they’ve never met in person.

Theirs is a friendship born of tragedy: The disappearance of Linda Stoltzfoos, the 18-year-old Amish woman who vanished six months ago today while walking home from church to her parents’ Upper Leacock Township home. Authorities have charged a man with kidnapping her.

Gosha, 55, and Grimes, 57, along with thousands of other people across the world, are captivated by the case. The women belong to Facebook groups — of which there are a half-dozen — that offer support and share updates on the search for Stoltzfoos. Gosha created one such page, “Justice For Linda Stoltzfoos.” Grimes is an administrator.

The women had been praying for Stoltzfoos and calling on others to offer support. In October, Gosha decided to recruit more people to join in the prayers, posting a message on multiple Facebook pages:

“Until she comes home to Lloyd and Susie Stoltzfoos and they have that closure, I cannot allow myself to forget their pain,” she wrote. “I admire their faith, and envy their sense of community, but I cannot begin to comprehend how anyone could possibly stand in the face of such evil without the prayers of thousands around the globe.”

Within a day, more than 10,000 people in the United States had responded with written prayers, Grimes said. More prayers were posted by people in places including Bangladesh, Guatemala, Ireland and Scotland.

Grimes, of Williamsburg, Virginia, printed some of the prayers using her home computer. She bound the 27 pages with a comb binding machine she has for making church cookbooks. The laminated cardstock cover shows a pair of hands in prayer over a candle-lit Bible.

She mailed the book to the Stoltzfoos family on Friday.

“We need to let them know that their names are being lifted,” she said Friday. “With everything that’s going on in 2020, I think this case has been incredibly sad. But the community of Lancaster has really shown the world what it should be like: The sense of community, the sense of support. It’s really been inspiring.”

Grimes and Gosha learned of Stoltzfoos’ case in different ways.

Grimes is disabled. She has a connective tissue disease that limits her activities, and she’s a full-time caregiver for her mother, who has Parkinson’s disease

“I needed something to de-stress. So, a couple years ago, I started following a totally different case (about a missing person). I learned a lot of skills on cyber-investigating. And I am a devout Christian,” she said. “So it’s just in my soul to help people. It culminated in trying to investigate criminals and missing children cases.”

She’s also a fan of Beverly Lewis, the Lancaster County-born author of stories about the Amish, so she was drawn in part to the Stoltzfoos case by her curiosity about the Amish.

Gosha, who lives about 10 miles north of Memphis, Tennessee, and cleans offices, learned of Stoltzfoos’ disappearance while scrolling through Facebook.

“I just got to reading about it, reading the comments. It was pretty much when it just happened and no one really knew anything,” she said. “My heart just went out to her,” she said, elaborating on why the case has intrigued so many people: the randomness, the allure of the Amish community, Stoltzfoos’ youth.

“It touches our heart just a little more because of the innocence. All cases touch the heart, but Linda is just special. She’s just special. She was the reason I came to get baptized,” Gosha said. “I wasn’t really no religious person, but I did believe in God.”

Over the summer, while talking with a man connected to the Stoltzfoos family, she said she broke down “and I cried and I talked to God and decided to go be baptized. It was time.”

She was baptized Aug. 9.

Grimes agreed the case has had a profound effect.

“I know it sounds bizarre, but I truly have been blessed — blessed — by this case. I feel almost an extension of the Lancaster and Amish community,” she said.

And both women, like many others, want nothing more than closure.

Justo Smoker, 34, of Paradise Township, was charged July 10 with kidnapping and false imprisonment after investigators said they found surveillance video showing his car was at a farm lane intersecting Beechdale Road in Upper Leacock Township, where a woman believed to be Stoltzfoos was last seen.

Multiple witnesses also reported seeing a woman dressed in Amish clothes and a man in a car that matched Smoker’s later the same day that Stoltzfoos disappeared.

Investigators said they don’t believe Stoltzfoos and Smoker knew each other. The fact that Stoltzfoos’ bra and stockings were found buried near where Smoker’s vehicle was seen at a business in Ronks leads “to the conclusion that she suffered harm,” District Attorney Heather Adams said in July.

Typically, prosecutors have six months to bring an incarcerated defendant to trial. But the COVID-19 pandemic prompted the state Supreme Court to declare a statewide judicial emergency that suspended that rule. And postponements sought by Smoker’s defense attorney do not count against that six-month clock.

Smoker had been out of prison for about 16 months before his arrest in July. He and his brother, Victor, were convicted of a string of robberies in August 2006, for which he served 12½ years of a 30-year maximum sentence. Victor was released in 2016.

DNA evidence found on a stocking of a missing Amish teenager, now presumed dead, prompted prosecutors to file a murder charge against the man …

Relief, albeit bittersweet and mixed with disappointment.