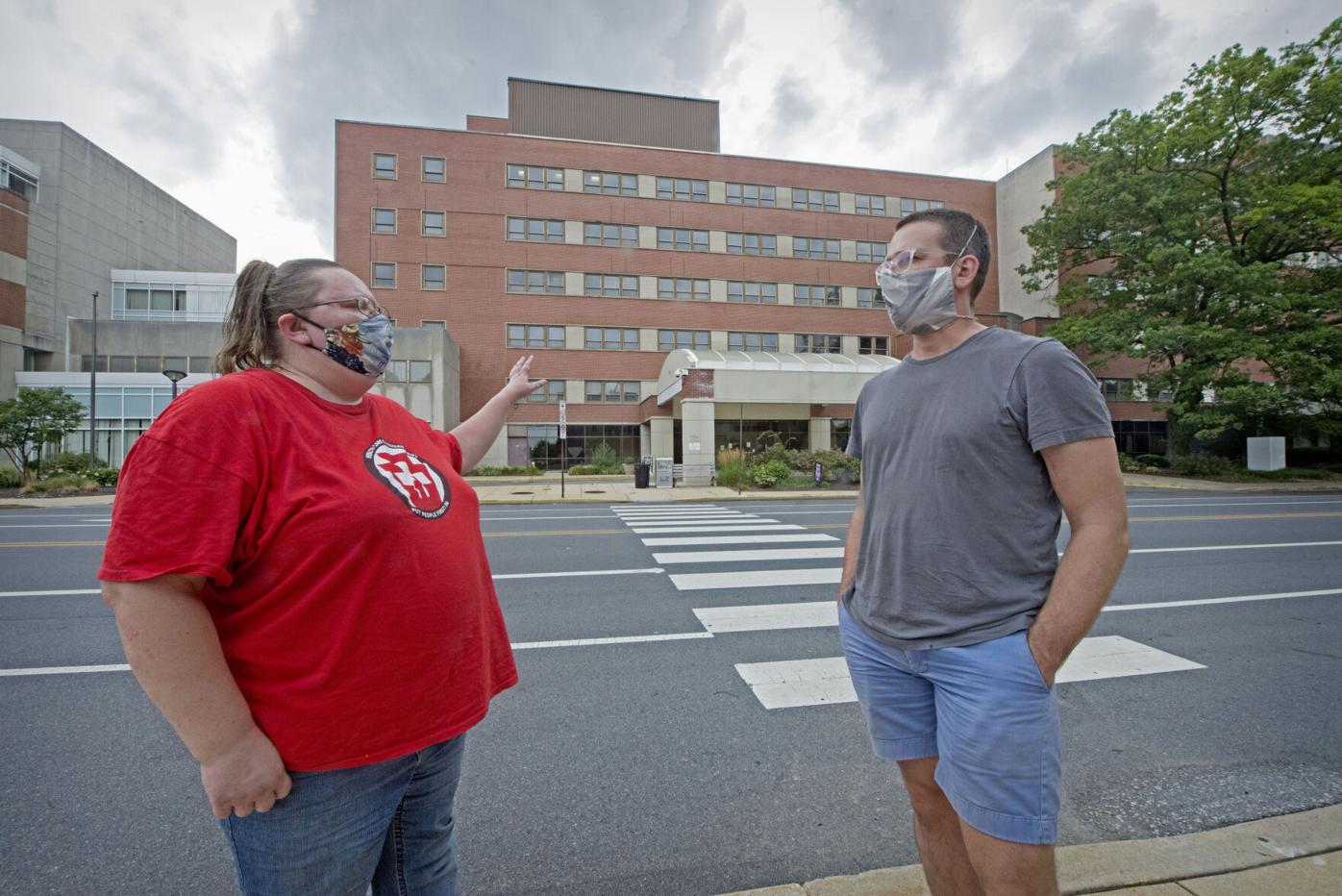 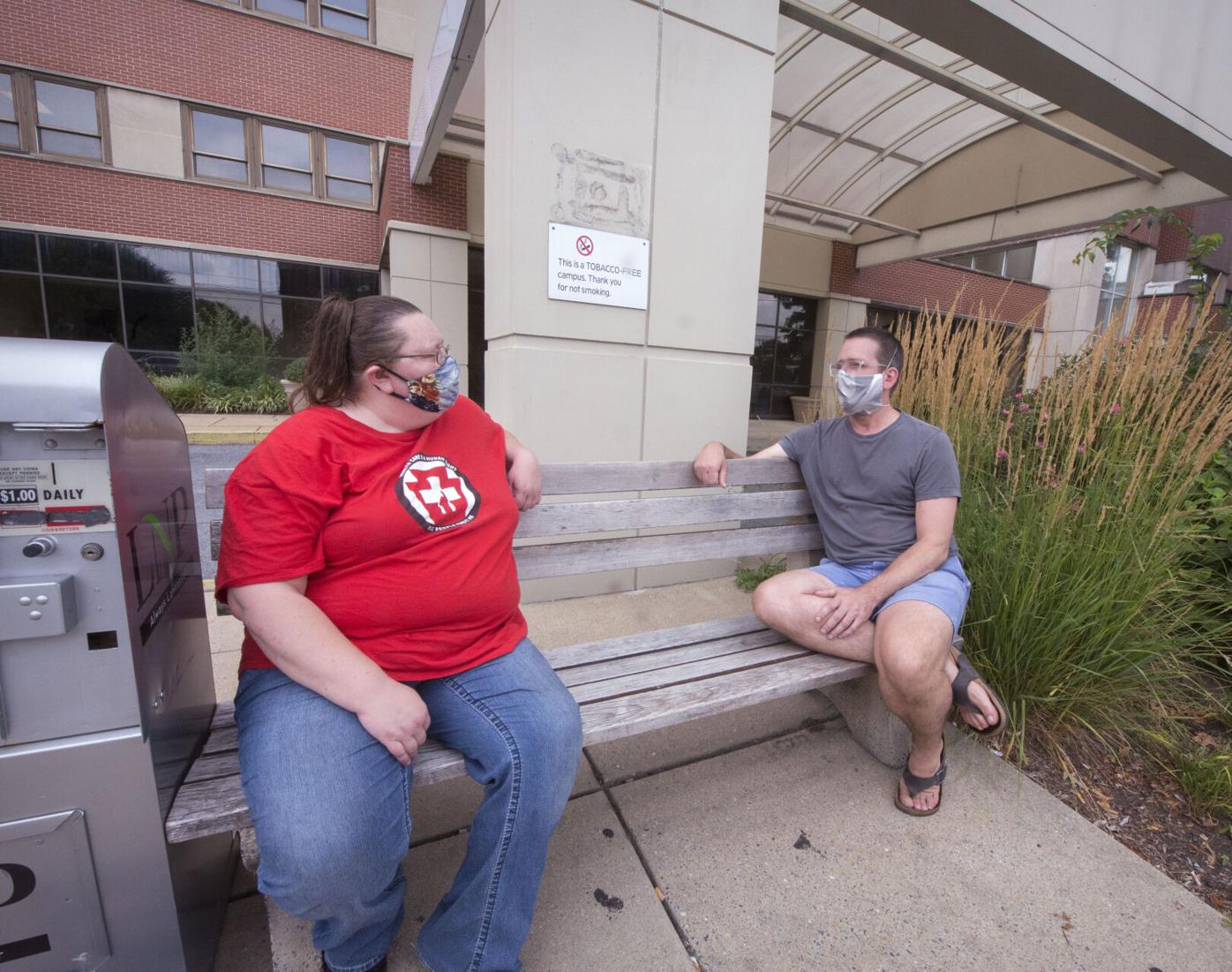 Tammy Rojas, left, and J. Eric Fisher talk as the sit on a bench outside the former UPMC Pinnacle Lancaster Hospital at 250 College Avenue Friday, July 24, 2020. 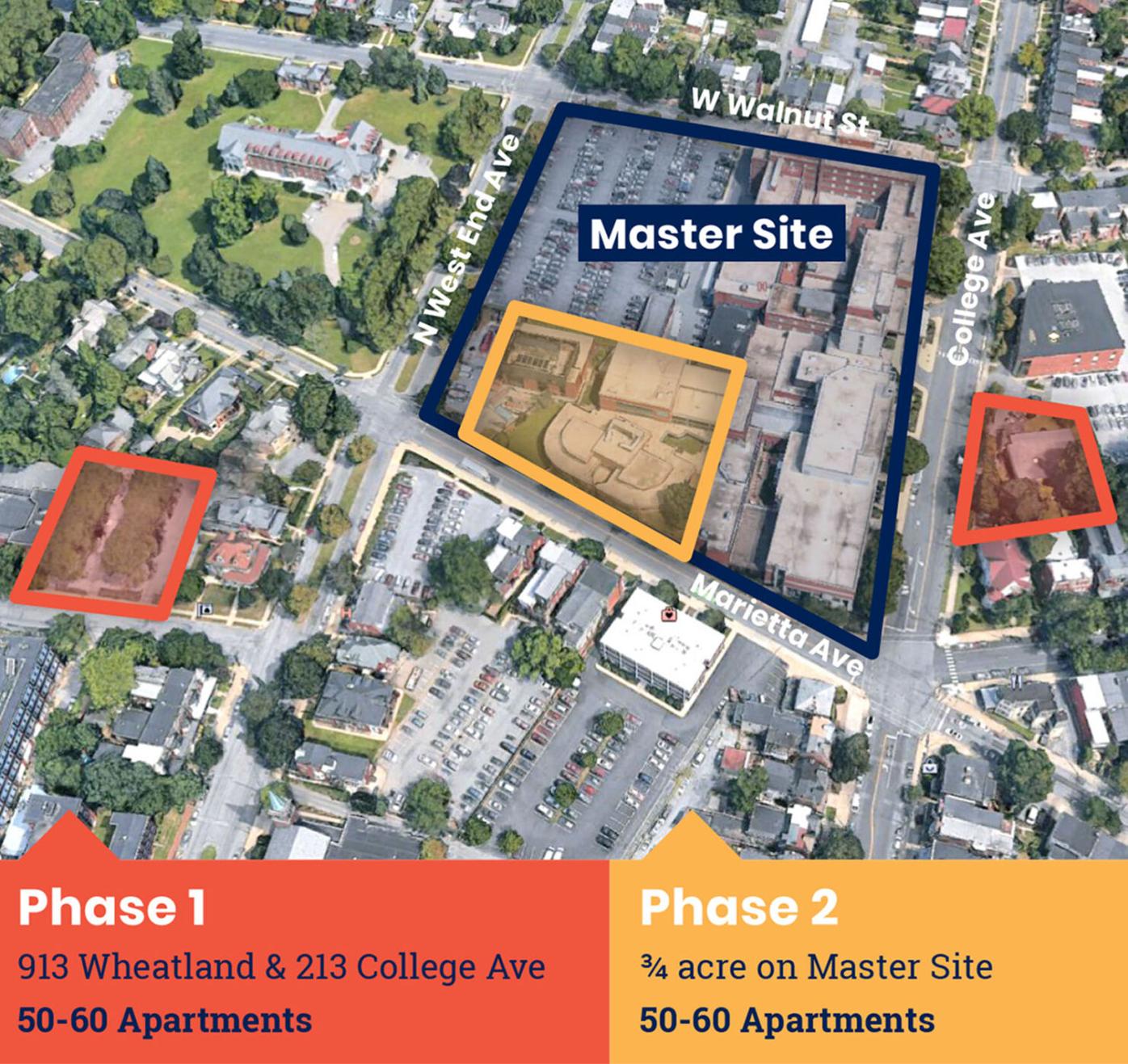 Tammy Rojas, left, and J. Eric Fisher talk as the sit on a bench outside the former UPMC Pinnacle Lancaster Hospital at 250 College Avenue Friday, July 24, 2020.

A proposal to turn one-time St. Joseph Hospital into housing, offices and shops is getting a mostly favorable reaction from officials and neighbors, with Lancaster Mayor Danene Sorace praising its inclusion of affordable housing.

“This is a win for Lancaster’s working families, families whose income has not kept up with the cost of housing,” Sorace said.

Initial plans are to build up to 325 housing units, of which 100 to 120 would be affordable to people with low and moderate incomes.

“The streetscape will be returned, especially along West End Avenue,” Sorace said. “It will reactive a block that currently sits vacant and underutilized.”

The project’s first public review is 6 p.m. Monday, Aug. 3, when a City Council committee, meeting virtually, will consider UPMC Pinnacle’s request to rezone the property from hospital complex to mixed use.

"This is a win for Lancaster’s working families, families whose income has not kept up with the cost of housing."

Sale of the closed, 214-bed hospital for development by the partnership of Washington Place Equities and HDC MidAtlantic hinges on the rezoning.

Ismail Smith-Wade-El, City Council president, didn’t disclose his position, but emphasized the great need for affordable housing in the city and across Lancaster County.

“I think it’s incredibly telling how excited we get over the possibility of 100 to 120 units of affordable housing when, indeed, the need is in the thousands,” Smith-Wade-El said. “This has been a tough time for the community with the loss of that hospital, so we don’t want to trade away … what it means to the community without a sense of certainty that the community is going to get something that it actually needs.”

Tammy Rojas, an antipoverty activist and co-coordinator of the grassroots Lancaster Healthcare Rights Committee, wants council to reject the rezoning, saying that during a pandemic the community shouldn’t abandon space that once provided medical services.

Rojas also questioned why the project clusters all of the market-rate housing, including up to 175 apartments and 30 townhouses for sale, on the hospital block, but only 50 to 60 townhouses for low-and-moderate income tenants.

The rest of the affordable housing is proposed for a four-story apartment house at each of two nearby sites: 213 College Ave. and 913 Wheatland Ave.

“It’s as if poor folk are somehow a disease and our poverty rubs off on the rich, and they might catch it,” said Rojas, who also worries the project will promote gentrification, or displacement of the poor from city neighborhoods.

“I feel like I’m being shunned out of my own community so a rich person can move in here,” she said.

The project proposes to densely redevelop an abandoned block with a diversity of uses, including different housing types and prices, a strategy for creating great places, Standish said.

And its location will promote less use of cars because residents will be able to walk, bike or take the bus to workplaces, shopping or amenities, he said.

Meanwhile, the School District of Lancaster “looks forward to the continued development of the city with this project,” Matthew Przywara, the district’s chief of finance and operations, said.

"I want us to be known as the city who brought in the great restaurants, a thriving art scene, architecture, farm-to-table food … but didn’t leave the community behind."

The district will want to assess the project’s impact on enrollment and tax revenue and update school boundaries accordingly, Przywara said.

“If (the proposed project) is done well, it will be a boost to the neighborhood,” said Laura Howell, who has lived in the 300 block of North West End Avenue for 23 years.

Howell said she supports the diversity the affordable units will provide her more affluent neighborhood and looks forward to walking to the new shops.

“This new plan will give the neighborhood some personality and could turn out to be a good thing,” she said, “but the developers need to be careful and still honor the architecture of our neighborhood.”

Eric Fisher of Woods Avenue liked aspects of the plan but thinks it could address more needs.

“I know we need tax revenue, but we also need medical nonprofits, affordable dental care, child care, social services, mental health care and some sort of community space,” Fisher said. “I want us to be known as the city who brought in the great restaurants, a thriving art scene, architecture, farm-to-table food … but didn’t leave the community behind.”

Plans for a $90 million project to transform the one-time St. Joseph Hospital property into a mix of office, retail, and both market-rate and …

A vote to rezone the former St. Joseph Hospital property to facilitate a $90 million plan to transform it into a mix of residential, office, a…

The Steinman Foundation is pledging $1.5 million to help a nonprofit developer build 64 affordable apartments as part of a multi-use redevelop…