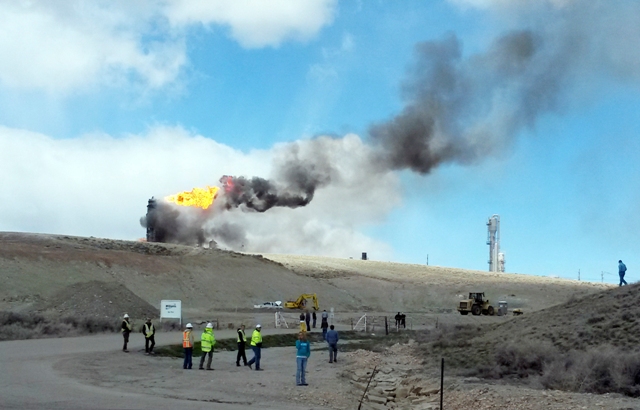 Officials arrive on the scene of an explosion and fire at a Williams-owned natural gas processing plant in Opal, Wyoming, April 23, 2014. The incident was one of several recent mishaps that triggered a federal probe into the company. 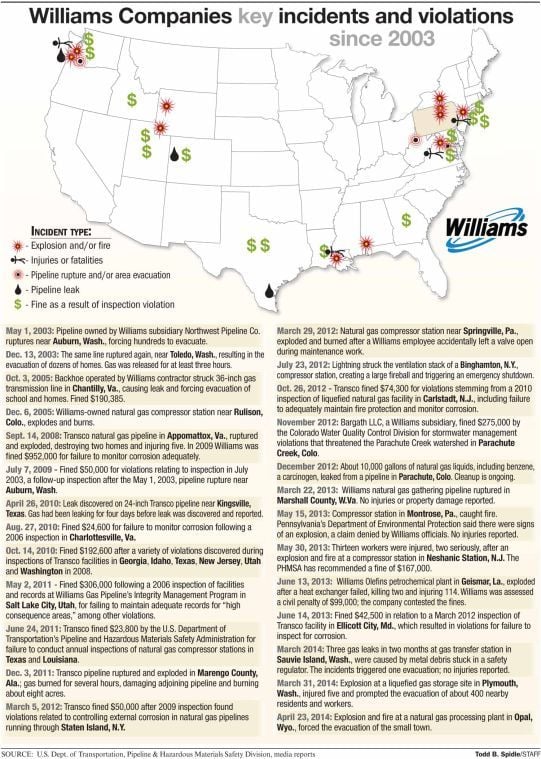 Officials arrive on the scene of an explosion and fire at a Williams-owned natural gas processing plant in Opal, Wyoming, April 23, 2014. The incident was one of several recent mishaps that triggered a federal probe into the company.

It was around 8 a.m. on Sunday, Sept. 14, 2008, when Appomattox County Deputy John Mattox rounded a curve and saw what he thought was a “dust devil,” a cloud of red Virginia dirt rising out of nowhere.

“It just kind of appeared,” said Mattox, who was on a routine patrol along a rural stretch of road that bordered pasture land — and a massive, 42-inch natural gas pipeline. “I knew it was unnatural, so I slowed down, almost to a stop.”

For the “dust” was dirt kicked up by a rupture in the pipeline, gas blowing at nearly 800 pounds per square inch. The sound was deafening, said Mattox; the rupture caused nearby power lines to sway, then fall, spark — and ignite a massive fireball about a half-mile high and at least that wide.

“It looked like a nuclear bomb went off,” Mattox said said. He raced to nearby homes, certain the inhabitants were dead. No one was, though five people suffered first- and second-degree burns. Two homes were demolished and 100 others damaged. Four hundred yards from the blast site, the vinyl siding on some homes was blistered from the heat.

The U.S. Department of Transportation’s Pipeline and Hazardous Materials Safety Administration would subsequently determine that corrosion caused the rupture, and would fine pipeline owner Transco — a subsidiary of the Williams Companies, which wants to build a new gas pipeline through a portion of Lancaster County — $952,500.

It was, experts say, a freak accident. Pipeline leaks and explosions are rare. And Williams, which operates about 15,000 miles of interstate natural gas pipelines and delivers about 14 percent of all natural gas used in the United States, has a better safety record than most.

But accidents do happen. And a recent spate of “unusual” mishaps at facilities owned by Williams, whose proposed Central Penn Line South pipeline would pass through parts of eastern Lancaster County, has triggered a federal investigation into safety practices at the company.

Williams, a multi-billion dollar international firm with dozens of subsidiaries that gather, store, process and transmit natural gas and natural gas liquids and produce “olefins” such as ethylene and propylene, has launched its own internal probe. But company representatives note that none of the recent accidents involve gas pipelines, like the one planned through Lancaster County.

Indeed, said Williams spokesman Chris Stockton, the firm plans to exceed federal safety regulations on the project, “taking some steps to go above and beyond to ensure this particular line is installed and operated safely,” he said.

“It’s one of those things, ‘out of sight, out of mind,’ ” said Stockton. “If you’re not having problems, people aren’t even aware that your pipeline is there.”

Awareness, however, can come in a fiery instant.

“There’s been a series of tragic accidents in the last few years,” said Carl Weimer, Executive Director of the Pipeline Safety Trust, a non-profit industry watchdog.

The most dramatic was a 2010 pipeline explosion in San Bruno, California, which generated a wall of fire 1,000 feet high and destroyed a neighborhood, killing 8.

That pipeline was not owned by Williams or any of its subsidiaries.

Williams, he said, appears “slightly safer” than other energy companies, with a lower number of incidents per mile of pipe. Still, he said, “people are right to be concerned” about pipeline safety — and should make those concerns known to the company.

A public meeting will be held on the proposal next week (see related story).

Williams Partners, LP, the firm behind the proposal, is one of several dozen subsidiaries of the Williams Companies, which is headquartered in Oklahoma and recorded $1.7 billion in revenue for the first quarter of 2014.

Among its pipeline assets are the 10,200-mile Transco or Transcontinental Pipeline system, which stretches from New York City to south Texas; a portion of the existing line passes through Lancaster County. Williams also owns Northwest Pipeline, a 4,000-mile system running from Colorado to the Canadian border.

Williams has been active in Pennsylvania’s Marcellus Shale region. The company paid the most in fines levied by the Pennsylvania Department of Environmental Protection last year, according to state records. Three Williams subsidiaries — Laser Northeast Gathering, Williams Field Services and Laurel Mountain Midstream — paid a cumulative total of $388,694 for violations recorded between March 2011 and September 2012.

The figure is slightly misleading, however, as the Laser violations occurred prior to Williams’ purchase of the company in 2012.

Violations included spills, failure to minimize and prevent erosion at well site and other issues.

The firm has been at the center of several high-profile incidents in recent years.

In Parachute, Colorado, a March 2013 spill of more than 10,000 gallons of hydrocarbon liquids from a Williams-owned pipeline contaminated soil and groundwater. Levels of cancer-causing benzene spiked past the federal safe drinking water limit in the nearby Parachute Creek, though they have since dropped. Cleanup is ongoing.

Williams-owned facilities have also suffered four explosions since May 2013, which has triggered a federal probe.

On May 30, 2013, 13 workers were injured, two seriously, after an explosion and fire at a natural gas compressor station in Neshanic Station, N.J. Less than two weeks later, on June 13, 2003, a heat exchanger at a Williams Olefins petrochemical plant in Geismar, Louisiana, suffered a “catastrophic” failure; a massive explosion rocked the plant, killing 2 and injuring 114.

Earlier this year, on March 31, an explosion and fire erupted at the Williams Northwest Pipeline liquefied natural gas plant in Plymouth, Washington, injuring five and forcing the evacuation of 400 residents and agricultural workers within a 2-mile radius. Less than a month later, on April 23, an explosion and fire ripped through a Williams-owned natural gas processing plant in Opal, Wyoming, triggering the evacuation of the small town.

The mishaps prompted a headline on the online environmental news site Grist.org: “This company’s gas plants just keep on exploding.” And it triggered the probe by the U.S. Chemical Safety Board, which has no power to impose sanctions but can make recommendations to avoid future problems.

“We’re going to look at whether or not there’s a higher-level corporate issue,” lead investigator Dan Tillema told Bloomberg News. “With a strong corporate oversight of process safety, it would be very unlikely to have [as many] incidents like this in a 12-month period.”

Williams representatives say they want to know what went wrong, too. The series of incidents “is unusual for us,” said company spokesman Tom Droege. “The situation has our attention — and the full attention of our CEO.”

The company recently commissioned a safety audit by third-party experts, Droege said. The audit’s in the early stages, but he said the company is making any changes recommended.

“We know we can't just say we are a safe, reliable company,” Droege said, “we have to demonstrate it through our actions, day in and day out. And we have to continually improve.”

Final orders from the Pipeline and Hazardous Materials Safety Administration in cases where Williams Companies subsidiaries were fined for violations.