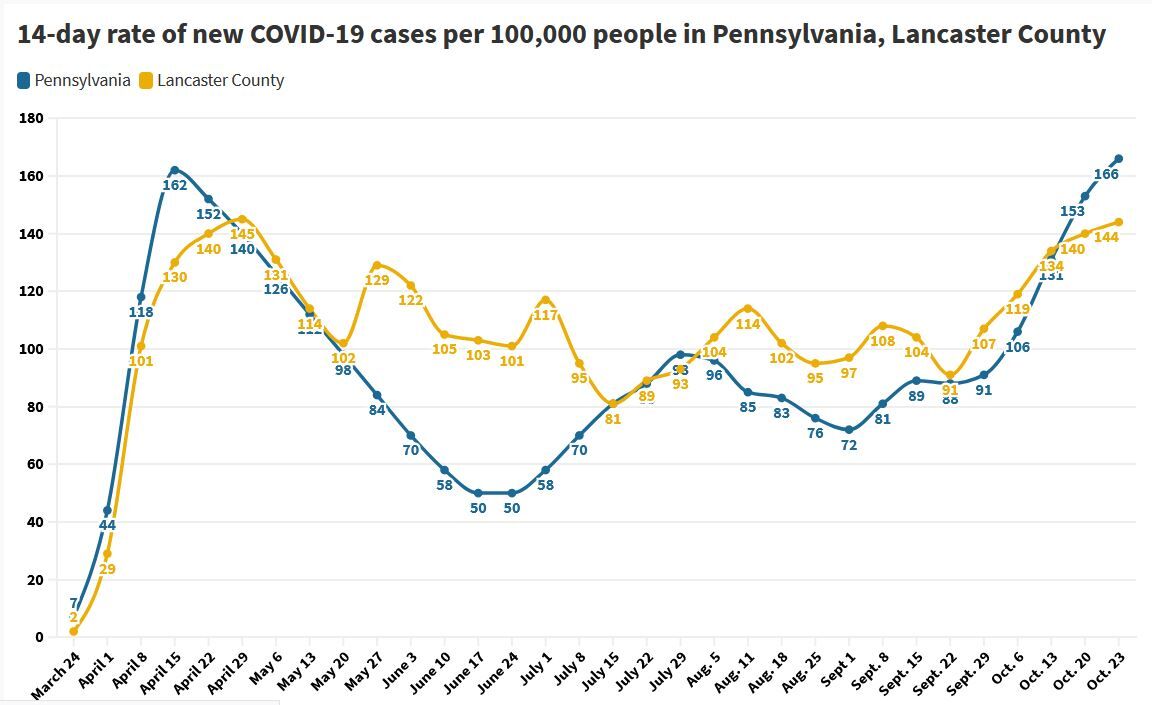 Pennsylvania hit a new milestone in the coronavirus pandemic Friday as its two-week volume of new cases surpassed its previous peak in mid-April.

“Mask-wearing is required in all businesses and whenever leaving home,” the department noted in a press release. “Consistent mask-wearing is critical to preventing the spread of COVID-19.”

Testing volume is much higher now than in the spring, so positivity rates are lower. But those rates are rising, and so are hospitalizations and deaths.

Though they remain well below their spring levels, hospitalizations and deaths have both increased in October after months of decline.

Statewide, the average daily number of hospitalized COVID-19 patients has jumped 85% this month, from 458 on Sept. 30 to 848 on Friday. Lancaster County’s figure has more than doubled, from 12 to 26, though much of the increase occurred in the first two weeks of the month.

On Friday, there were 34 COVID-19 patients at either Lancaster General or WellSpan Ephrata hospitals, according to data posted on their websites. That was the highest daily number since Aug. 11.

With a week left in the month, Pennsylvania has reported 483 COVID-19 deaths so far in October, compared with 469 for all of September. A total of 8,625 people have died of COVID-19 in the state since March.

As of Friday, Dr. Stephen Diamantoni, the county’s coroner, had reported 14 deaths so far in October — one more than he reported for the full month of September. Diamontoni’s total COVID-19 death tally is now at 441 for Lancaster County.

Pennsylvania was reporting test results on about 6,000 new people per day back in mid-April, and that number is now approaching 16,000. The total number of daily tests administered — including people who are tested multiple times as part of universal testing programs in workplaces, nursing homes and elsewhere — is currently about twice that high, according to the Department of Health.

When including only those people testing negative for the first time in the calculation — as the Department of Health does in its daily data reports — the positivity rate is much higher.

State police respond to standoff at residence near Quarryville

Share your favorite spots for a winter hike [survey]

When Betty Rutt remembers life before the pandemic, what she misses most is her family.

The number of people hospitalized for COVID-19 in Pennsylvania continues to climb steadily as the state’s fall coronavirus surge continues.