FILE - Former President Donald Trump speaks from the podium during a rally, Sunday, May 1, 2022, in Greenwood, Neb. In a court appeal, a lawyer for Trump said Monday, May 2, 2022, it is “unconscionable and indefensible” for the ex-president to be held in contempt and fined $10,000 a day for failing to turn over documents he doesn’t possess. 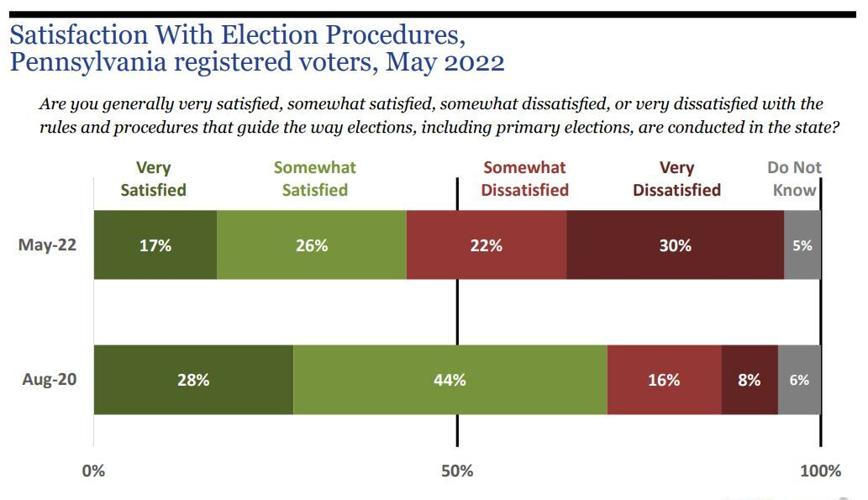 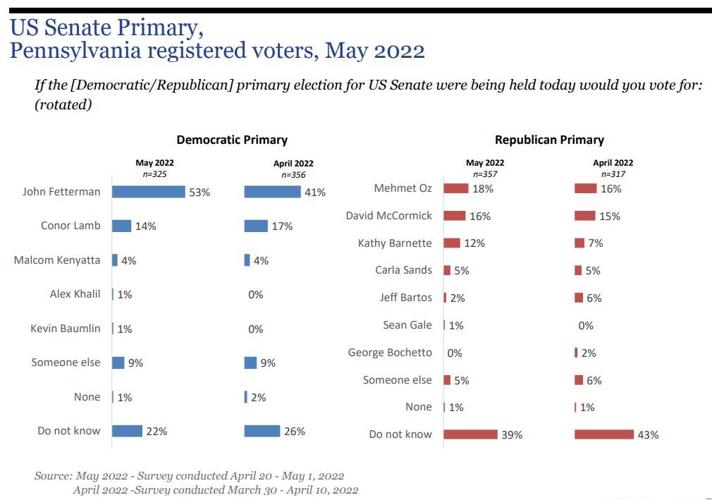 HARRISBURG — The "Big Lie" has sunk in.

Pennsylvania voters have grown increasingly dissatisfied with how elections are run over the past two years, a new statewide Franklin & Marshall College poll shows, and analysts say their concerns are directly fueled by baseless claims of voter fraud peddled by former President Donald Trump and other Republicans.

The findings are stark: More than half of the voters surveyed in late April — 52% — said they don’t like the way elections are handled, more than twice level of dissatisfaction found in a similar poll conducted before the 2020 presidential election. And they favor ditching mail ballots and imposing tough new voter ID laws.

“The rhetoric about 2020 has clearly had an impact,” said Berwood Yost, director of F&M’s Center for Opinion Research.

Nearly three out of four Republicans — 72% —are dissatisfied, compared to only 29% of Democrats. More than half of independents and third-party voters don’t like the way elections are run.

Most Republicans favor the elimination of mail-ballot drop boxes despite the lack of evidence they contribute to voter fraud, and most Democrats strongly oppose the move. Those calling for change to how elections are run say they favor voter identification laws (26%) and eliminating mail-in ballots (19%).

One of the leading Pennsylvania politicians pushing the false Trump narrative on social media is state Sen. Doug Mastriano, a retired Army colonel. The F&M poll shows he holds a slight lead in the Republican gubernatorial primary but the May 17 contest remains an open race with more than half of voters still deciding. There are nine GOP candidates but only three with poll numbers in double digits.

The winner of the Republican race will take on Attorney General Josh Shapiro, who is unopposed and the prospective Democratic gubernatorial nominee.

The backdrop is a jittery electorate worried about the economy, unemployment, gas prices and personal finances. Nearly a quarter of all voters say those issues are their primary concerns.

Three of four voters believe things in the U.S. are “on the wrong track.”

The poll “finds little change in the mood of Pennsylvania’s voters since our March and April polls, with economic concerns remaining high and voters continuing to feel deeply frustrated and mostly dissatisfied with President (Joe) Biden’s performance,” said Yost.

It is also a midterm election, when the party out of power often makes gains over the party holding power, in this case the Democrats who occupy the White House.

In one of the most closely watched U.S. Senate races in the country, there is still no clear front-runner despite millions spent on TV ads, mostly by Dr. Mehmet Oz, the TV celebrity and heart surgeon, and former hedge fund CEO Dave McCormick. The poll showed Oz with support from 18% of Republican voters compared to McCormick’s 16% and former Fox News commentator and author Kathy Barnette’s 12%.

Trump has endorsed Oz in the Senate race.

Among Democrats running for Senate, Lt. Gov. John Fetterman holds a commanding lead, 53% to 14%, over U.S. Rep. Conor Lamb, but one in four voters remain undecided, the poll found.

The poll surveyed 792 registered voters from April 20 through May 1. The margin of error overall is 4 percentage points. It is slightly higher on the survey of the primary races.

In the governor’s race, Mastriano leads with 16% of the vote, followed by former U.S. Attorney Bill McSwain with 12%, former U.S. Rep. Lou Barletta with 11% and self-described blue-collar businessman Dave White with 8%. Trump has not endorsed in the GOP governor’s race. It’s not clear whether he will do so.

He has, however, inserted himself into the race by criticizing McSwain — calling him a “coward” — for not pursuing so-called election fraud in the November 2020 election.

There has been no evidence of widespread voter fraud.

Mastriano has been subpoenaed by the special congressional committee investigating the Jan. 6 attack on the U.S. Capitol. While Mastriano attended and arranged bus trips for Trump supporters, there is no evidence he entered the Capitol.

The poll was conducted before news broke that the U.S. Supreme Court appeared to be preparing to overturn Roe v. Wade, a move that would open the door for states to ban abortion.

Pa. Treasury owes more than $57M to Lancaster County residents; here's how to check the list

A look at abortion in Lancaster County through the years: Planned Parenthood's failed clinic bid, cases in the 1800s

In 2020, 617 Lancaster County residents received an abortion, according to the latest data f…