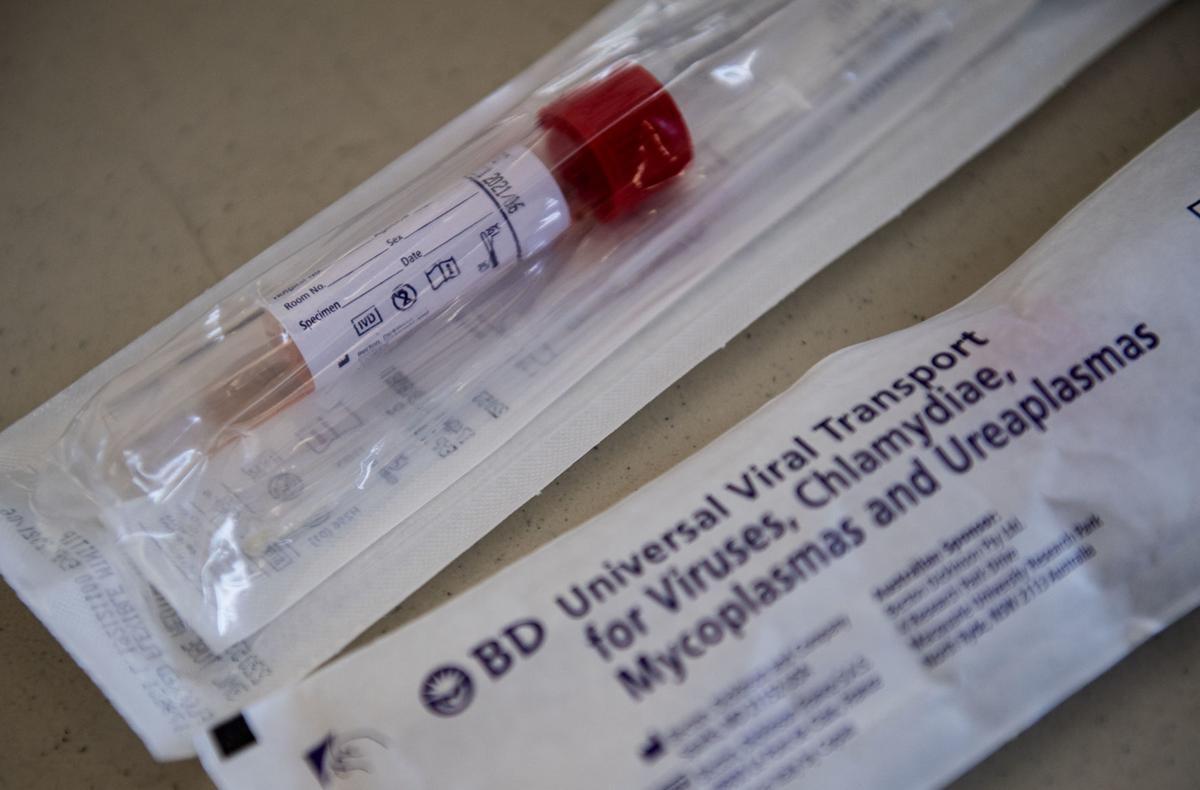 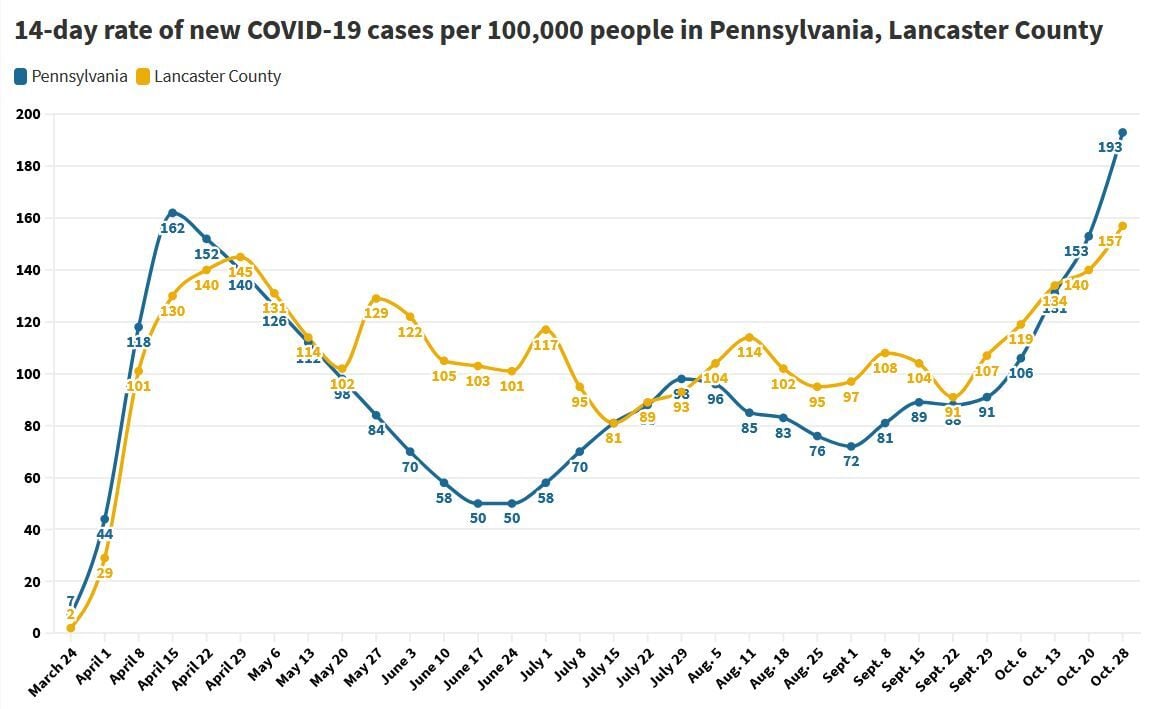 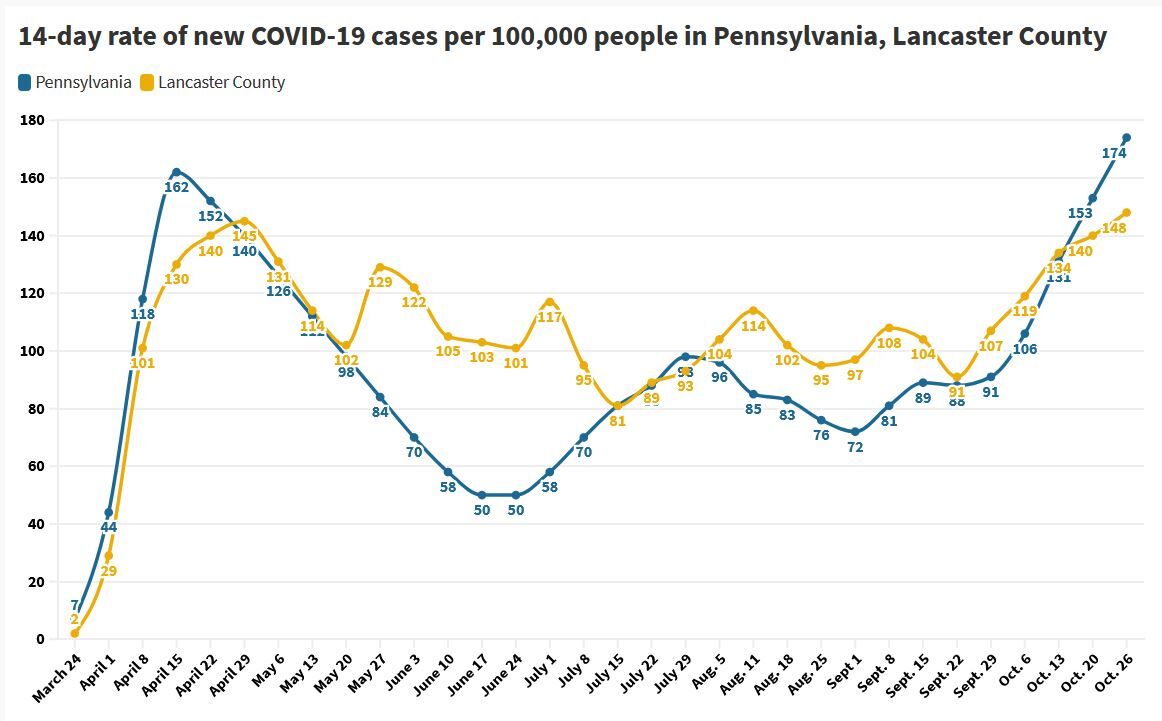 The 14-day per-capita rate of new coronavirus cases in Pennsylvania is now higher than it was at the pandemic's spring peak.

Pennsylvania has had more than 200,000 confirmed cases of coronavirus since the first case was recorded in the state eight months ago.

There have been 202,876 positive cases of COVID-19 and 8,762 deaths since its first two cases were reported on March 6, the state Department of Health reported Thursday.

Pennsylvania is currently experiencing daily increases in cases at a rate that is comparable to April, according to a Department of Health release on Thursday.

The state has administered nearly 4 million tests, excluding antigen tests, with 2.23 million people who have tested negative for the virus. This means more than a quarter of Pennsylvania’s 12.8 million residents have been tested for the virus.

While cases are rising in the county and the rest of the state, Lancaster County hospitals have held steady with few hospitalizations and even fewer people on ventilators as treatment for COVID-19. As cases increase, hospitalizations and deaths are certain to increase (although fatality rates have improved), according to the COVID Tracking Project at The Atlantic.

And as COVID-19 cases continue to rise in Pennsylvania, President Donald Trump will hold another set of outdoor campaign rallies in Berks, Bucks and Butler counties on Saturday, his second visit to the region this week. He visited Lititz, Allentown and Martinsburg on Monday.

During his Lititz rally at the Lancaster Airport, thousands of attendees were required to wear masks to get through security. But after attendees passed a health screening and temperature check, masks were not enforced and most did not wear them.

Community spread of COVID-19 is occurring throughout Lancaster County and the state, said Department of Health spokesperson Nate Wardle in an email.

A CNN analysis of 17 recent Trump rallies four weeks before and four weeks after by Dr. Sanjay Gupta found that in the weeks following a Trump rally, COVID-19 cases increased in that county 82% of the time, and cases grew faster than state rates more than half the time.

For example, following a Sept. 12 rally in Minden, Nevada, the county had its cases increase by 225% in the following four weeks. This outpaced the 74% increase in cases the state experienced during this same time period.

“We have asked, and continue to ask, Pennsylvanians to think of the health and safety of their families and their communities before attending events by the Trump campaign – or any large event,” Wardle added.

Former Vice President Joe Biden put out a statement about Pennsylvania surpassing the milestone, calling it a “a tragic reminder that President Trump has failed at his most basic and essential duty, to keep American families safe.”

The Trump campaign did not respond to requests for comment about the state surpassing the 200,000-case threshold.

An inmate of Lancaster County Prison who was hospitalized with COVID-19 has died, prison officials said Friday.