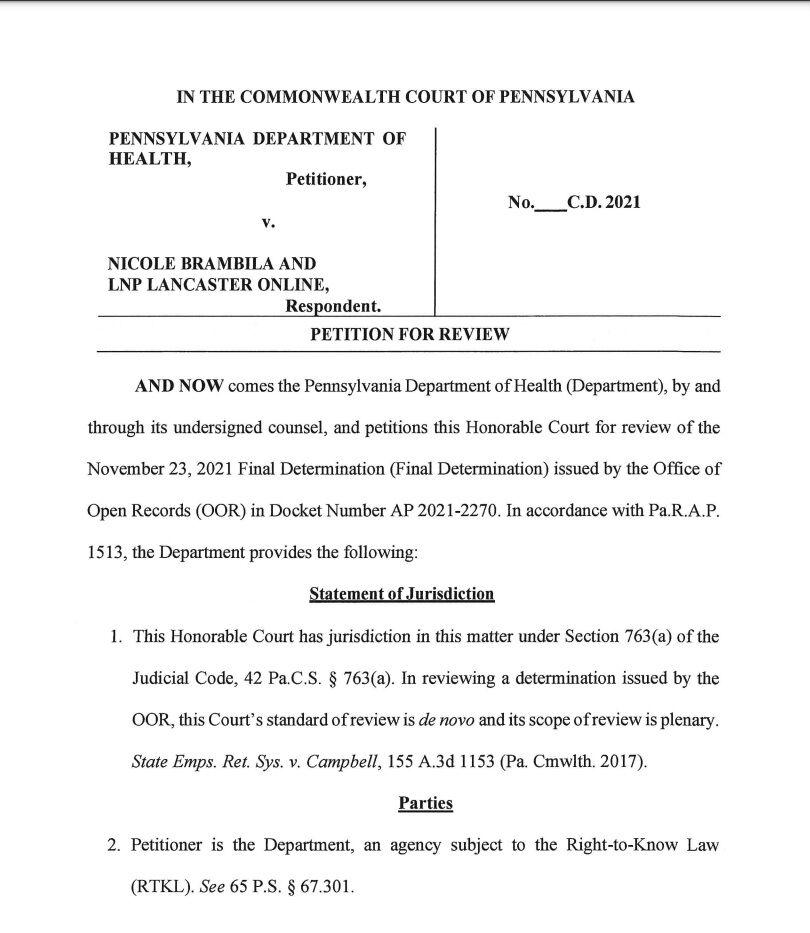 The state Department of Health continues to deny public access to COVID-19 death totals by ZIP code in Lancaster County.

The state Department of Health continues to deny public access to COVID-19 death totals by ZIP code in Lancaster County.

Reporter Nicole Brambila filed a Right-to-Know request Sept. 1 asking that the department provide aggregated data on COVID-19 infections, deaths and vaccinations by ZIP code within Lancaster County. In making this data available to the public, local officials would have more timely information to prepare for shifts in a constantly evolving global pandemic that has killed more than 1,300 Lancastrians.

The department sent Brambila a link to its public website, which has ZIP code-level data on infections and vaccinations but does not have similar data on deaths. LNP | LancasterOnline in November appealed the denial to the Pennsylvania Office of Open Records, which is the state arbiter of public information disputes. The Office of Open Records sided with the newspaper on Nov. 23.

Now, the Department of Health is challenging that ruling in Commonwealth Court on the grounds of a “constitutional right to privacy” for individuals who the records could potentially identify – the same argument that open records officials dismissed.

Terry Mutchler, a Philadelphia attorney who served as the state’s first Office of Open Records executive director, said it has been well established in the Right-to-Know Law that aggregated data should be publicly available.

The appeal “is a significant waste of taxpayer money,” said Mutchler, who has represented LNP | LancasterOnline in previous open-records cases. She added that even if the law would fully support the department, the COVID-19 omicron variant is emerging internationally. “It seems to me that more information – not less – should be provided to the public,” she said.

If the Commonwealth Court rules in favor of Brambila and LNP | LancasterOnline, it could be at least six months before records would be released, Mutchler said.

“Our reporter and our news organization believes that disclosure of this information is in the public interest and will assist our community’s understanding of the scope of this pandemic,” Robert Krasne, chairman and CEO of Steinman Communications, which owns LNP Media Group, said in a statement.

“Given the strength of the opinion issued by the OOR, we plan to expend the resources needed to contest DOH’s petition for review of the OOR decision and to ultimately obtain these records.”

The case has implications beyond LNP | LancasterOnline’s interest in Lancaster County-specific data. Should the ruling stand that the data is a public record, counties without health departments could access it to target responses to the pandemic.

'Tougher days may be ahead': What does 2022 hold for the COVID-19 pandemic in Lancaster County?

With 2021 in the rearview mirror and the new year quickly approaching, LNP | LancasterOnline…

Ephrata man who shot 4 people after argument over Snapchat video sentenced to at least 24 years in prison: DA

A 21-year-old Ephrata man who shot four people in July 2020 will spend the next two dozen years in prison, the Lancaster County District Attor…

A 12-year-old girl who was last seen on Tuesday has been found safe, Lancaster city police reported.

Emergency departments at hospitals operated by Penn State Health should not be used by people seeking routine COVID-19 testing, the health sys…

Like many parts of the nation, Lancaster County set new COVID-19 case count records this week as it headed toward the New Year’s holiday. Hosp…

Two Lancaster County judges are retiring, which will leave two vacancies on the 15-member bench — probably until the next election in two year…