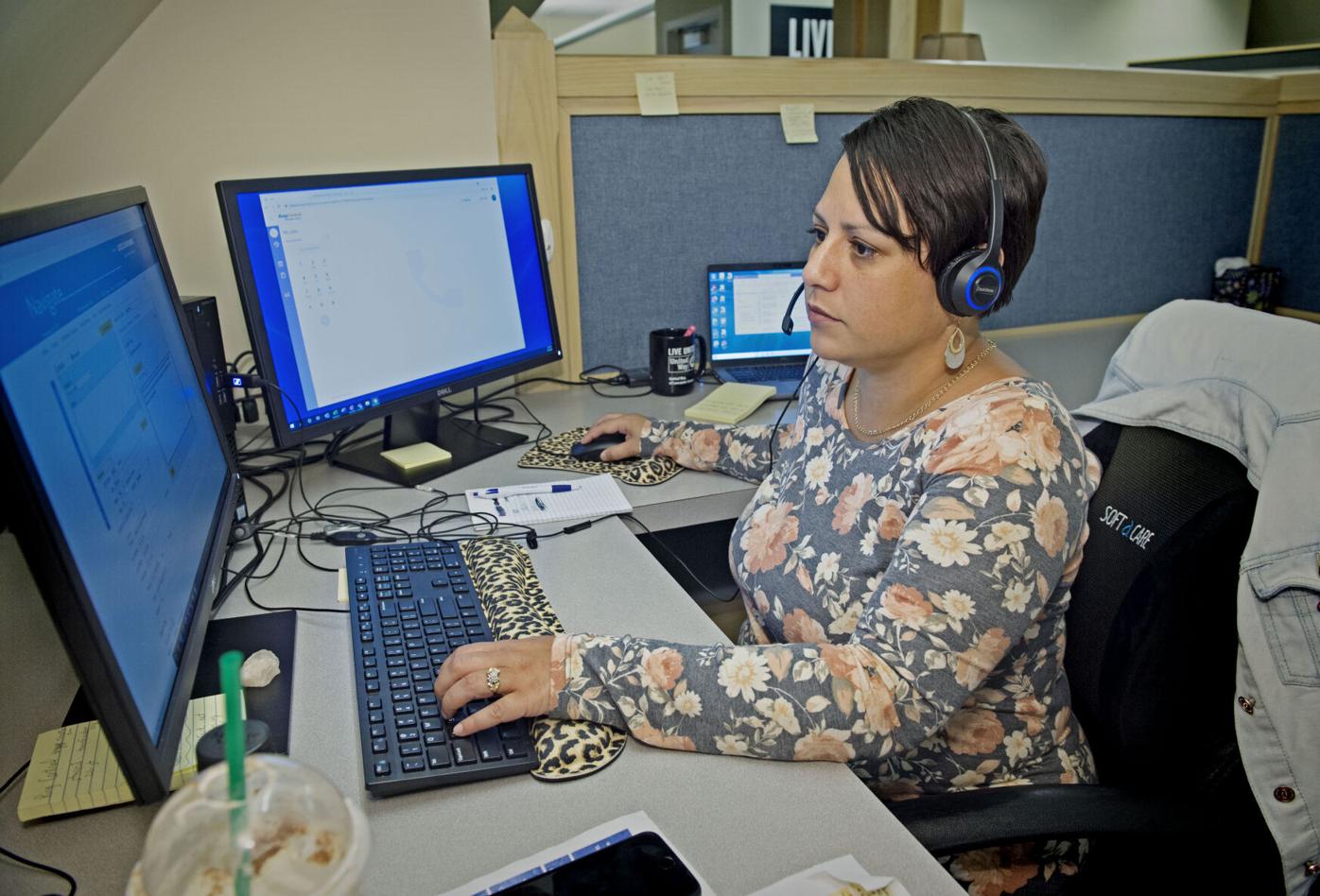 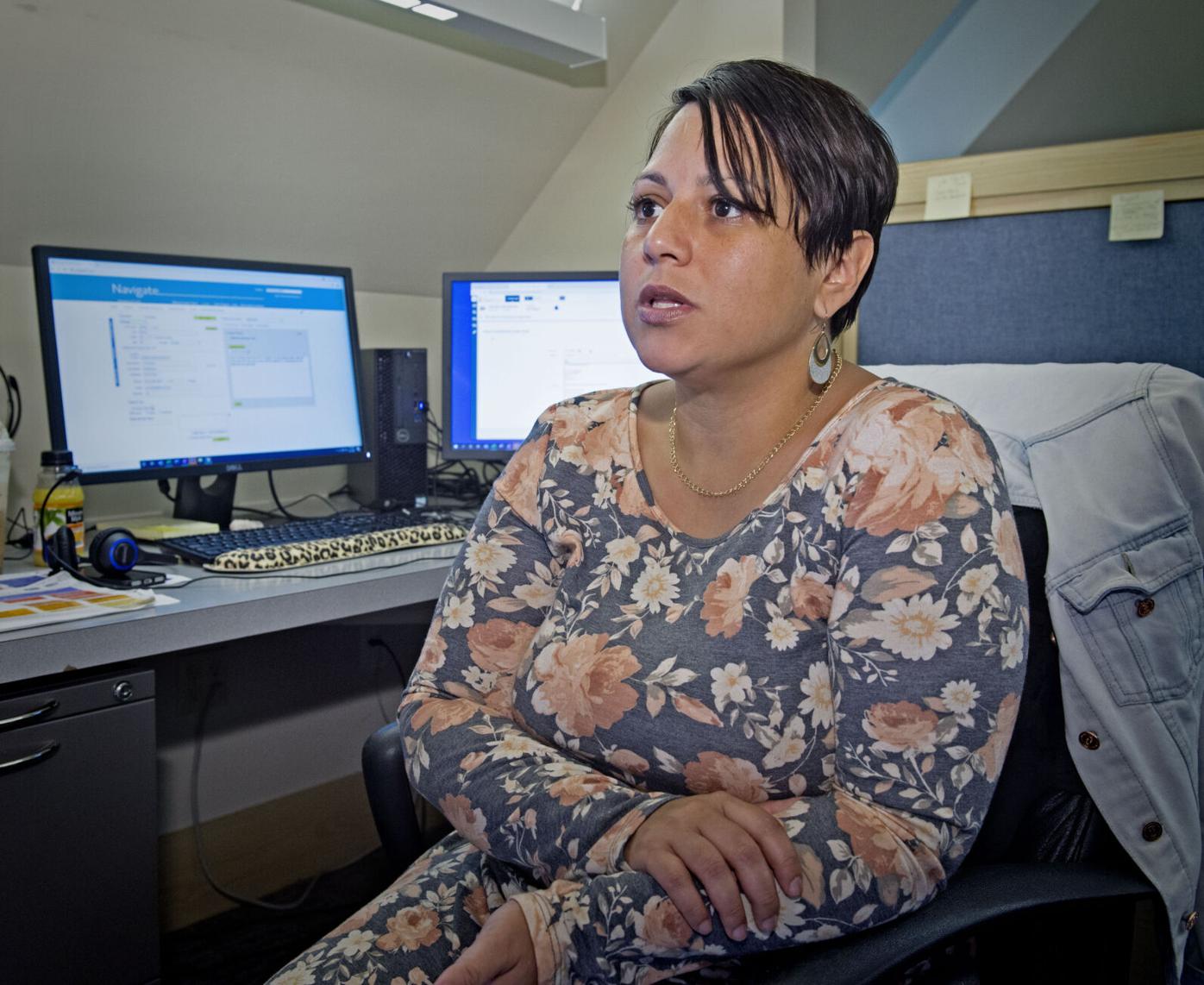 Jessica Torres, coordinated entry housing specialist at the PA East 211 Call Center, talks about her experiences as a client and an employee at the call center, Wednesday, July 21, 2021.

Jessica Torres, coordinated entry housing specialist at the PA East 211 Call Center, talks about her experiences as a client and an employee at the call center, Wednesday, July 21, 2021.

Learning from home during the pandemic was more than an inconvenience for Jessica Torres and her son. It was a threat to their livelihood.

When her 14-year-old son wasn’t logging on for school, Torres, a single mother, had to make a choice — keep working as her son falls behind or quit her job to help him.

“I had to sacrifice my job and stay home with my son,” she said.

But helping Fernando didn’t pay the bills. She wasn’t facing eviction with a nationwide rent moratorium in place, yet she needed help to pay her landlord.

A social worker by profession, Torres had always referred clients to the PA 211 East call center run through the United Way of Lancaster. Now, she needed to make the call for herself.

A call specialist referred the 38-year-old mother to an agency near her home in Columbia to help her file for six months of rental assistance.

And she’s not the only one.

More than a quarter of Lancaster County households are living paycheck to paycheck and could slip into poverty when pandemic safeguards like the rent moratorium are lifted, according to a recent United Way of Pennsyvania survey.

Before the situation becomes too dire, Kevin Ressler, president and CEO at United Way of Lancaster County, said these families should follow Torres’ example and call 211, a toll-free number available 24/7. Ressler said callers to the Lancaster County-based regional PA 211 East call center are referred to as many as 600 local agencies providing human services from rental assistance to mental health counseling.

Dial 211 or text your zip code to 898-211 to talk with a resource specialist for free. Visit https://www.pa211.org/ to view available resources.

Dial 211 or text your zip code to 898-211 to talk with a resource specialist. Visit https://www.pa211.org/ to view available resources. A chat service is available on the website on a limited level.

Pennsylvania’s 1.3 million households living one emergency away from crisis are experiencing even greater financial strain after an entire year facing the impacts of the COVID-19 pandemic, according to the United Way of Pennsylvania’s second COVID-19 Impact Survey, conducted in March. Over the last year, these families were more concerned about paying their housing expenses than the risk of a household member contracting COVID-19.

The Centers for Disease Control and Prevention’s national eviction moratorium, to protect tenants from eviction despite being unable to make rental payments, expires on July 31.

Any household living above the Federal Poverty Level that still can’t afford the cost of household essentials falls under the Asset Limited, Income Constrained, Employed (ALICE) threshold, according to the United Way’s March report. Conducted exactly one year after the pandemic began, the United Way report found that housing stability, health and mental wellbeing, childcare, internet access and food insecurity are major concerns for Pennsylvanians at or below the ALICE level.

ALCE stands for Asset Limited, Income Constrained, Employed. An ALICE household or individual lives above the Federal Poverty Level (FPL) but less than the cost of living in their county, according to United for ALICE, a research project based out of United Way of Northern New Jersey.

The FPL varies by household size. According to the latest ALICE research from 2018, at an income of $12,140or lower, seniors and single adults fall at or below the FPL. A family of four hits the mark at $20,100 a year.

The FPL is normally less than half of what is considered an ALICE household survival budget — an estimate of the minimum total cost of household essentials such as childcare, food and transportation. A family of four might struggle to afford basic necessities with an income under $69,648.

More than a quarter, or 27%, of Pennsylvania households are considered ALICE households. Lancaster County’s ALICE households constitute 26% of its population. Adding in those who live below the FPL add 12% and 8%, respectively, to the total households struggling to survive.

“With ALICE families, when you’re basically living paycheck to paycheck, you don’t have extra to put into savings,” said Kristen Rotz, president of the United Way of Pennsylvania. “Now we know there’s a lot of backup, for example, with housing and rent payments, and a lot of that’s going to come home to roost.”

The Federal Poverty Level for a family of four in 2018 was an income of $25,100 per year, according to United For ALICE, a research project based out of United Way of Northern New Jersey.

Out of Lancaster County’s 202,490 households, 8% are living in poverty and 26% are ALICE households, according to 2018 ALICE data.Pennsylvania compiles data through United For Alice every two years. Data on ALICE families in 2020 will be available in 2022.

The significant disruption caused by COVID-19 means that the number of ALICE households will increase in communities statewide, according to the report.

"Lifting households in poverty into the ALICE threshold and bringing ALICE families to financial stability is an economic investment,” said Rebecca O’Shea, advocacy engagement coordinator for the United Way of Pennsylvania. If all households in the state were above the ALICE threshold, for example, their additional earnings and tax revenue from those earnings would add $130.2 billion per year to Pennsylvania’s gross domestic product, according to ALICE data.

“This ALICE population, they’re going to spend that money when it comes to them,” O’Shea said. “All these stimulus checks, the earned income tax credit at the federal level, the child tax credit that we’re getting this month and throughout the rest of the year — all of that money will be spent.”

United Way of Pennsylvania advocates for a state Earned Income Tax Credit, which helps low to middle income earners by returning their earnings back to the household.

How to donate time or money

Lancaster residents who wish to help can donate to a specific nonprofit directly or donate to United Way’s Impact Fund. Lancaster’s United Way Impact Fund distributes donations to maximize the money’s influence on the community, focusing mainly on education, income and health.

Donations can also be made directly to United Way’s 211 call center.

If a monetary donation isn’t possible, volunteering is a free alternative to get involved in the community. United Way’s volunteer center can connect people with nonprofits that need assistance.

Ressler said donating to United Way’s Impact Fund ensures resources will be distributed to nonprofits in need, but it is also beneficial to donate to specific organizations that assist Lancaster residents with the biggest concerns such as housing, mental health and education.

Biggest concerns for the most vulnerable in Pennsylvania

Approximately two thirds of survey respondents in the United Way’s March report who are below the ALICE threshold reported that paying for housing is one of their biggest concerns. The data checks out. A top need expressed by 211 callers is how to find and pay for housing, Gainer said.

While secure households tend to have two months or more in savings for unexpected expenses or emergencies like job loss or illness, — common problems that Pennsylvanians faced during the pandemic — 68% of respondents with an income below the ALICE threshold had one month or less in savings to make rent, buy groceries or pay for childcare despite unexpected emergencies.

The number is down from 77% of respondents in United Way’s 2020 COVID-19 Impact Survey, indicating that “pandemic safeguards such as stimulus checks, unemployment insurance, and other forms of assistance helped Pennsylvania families stay afloat.”

With 65% of respondents below the ALICE threshold reporting job loss, temporary lay-off or job change, those safeguards were necessary.

More than half of ALICE households reported either reducing hours or leaving their job to care for their children.

It’s no surprise then that mental health and well-being was the second largest concern for respondents of any household income.

“This past year, especially not just for the ALICE population but for all populations, just really caused a lot of people to take a pause and think about what they want in life and if they truly agree with the life that they're living,” O’Shea said.“Mental health, and the lack of access to mental health providers, is an essential point to talk about.”

When Lancaster residents call 211 to connect with a mental health provider or a rental assistance program, they might just end up getting help from Torres.

Now she’s getting the calls; she works as a coordinated entry housing specialist for the center.

“It all played out perfect,” she said. “It wasn’t easy and it wasn’t fun. I had to be very patient.”

Pennsylvania Gov. Tom Wolf and other state and local leaders visited Community Action Partnership in Lancaster on Thursday to celebrate $30 million in additional funding for early childhood education in the 2021-22 state budget.

Art exhibit to educate and draw on affordable housing needs

'The program is not ending': Rental assistance still available for Lancastrians as eviction moratorium end nears

As local governments and nonprofits race to distribute $870 million in federal funding for rent and utility relief, just 17% of that money has reached desperate tenants.

Advocates hope the ruling will prompt other counties to issue similar orders, guaranteeing that tenants won’t lose their homes while waiting for help.

Lancaster County tenants who have fallen behind on their rent may be spared eviction until Oct. 3, but only if COVID-19 continues spreading in…

What renters in Pa. need to know about available relief, the new eviction ban

Pennsylvania has more than $1 billion in rental aid available to people who have fallen behind because of the pandemic.