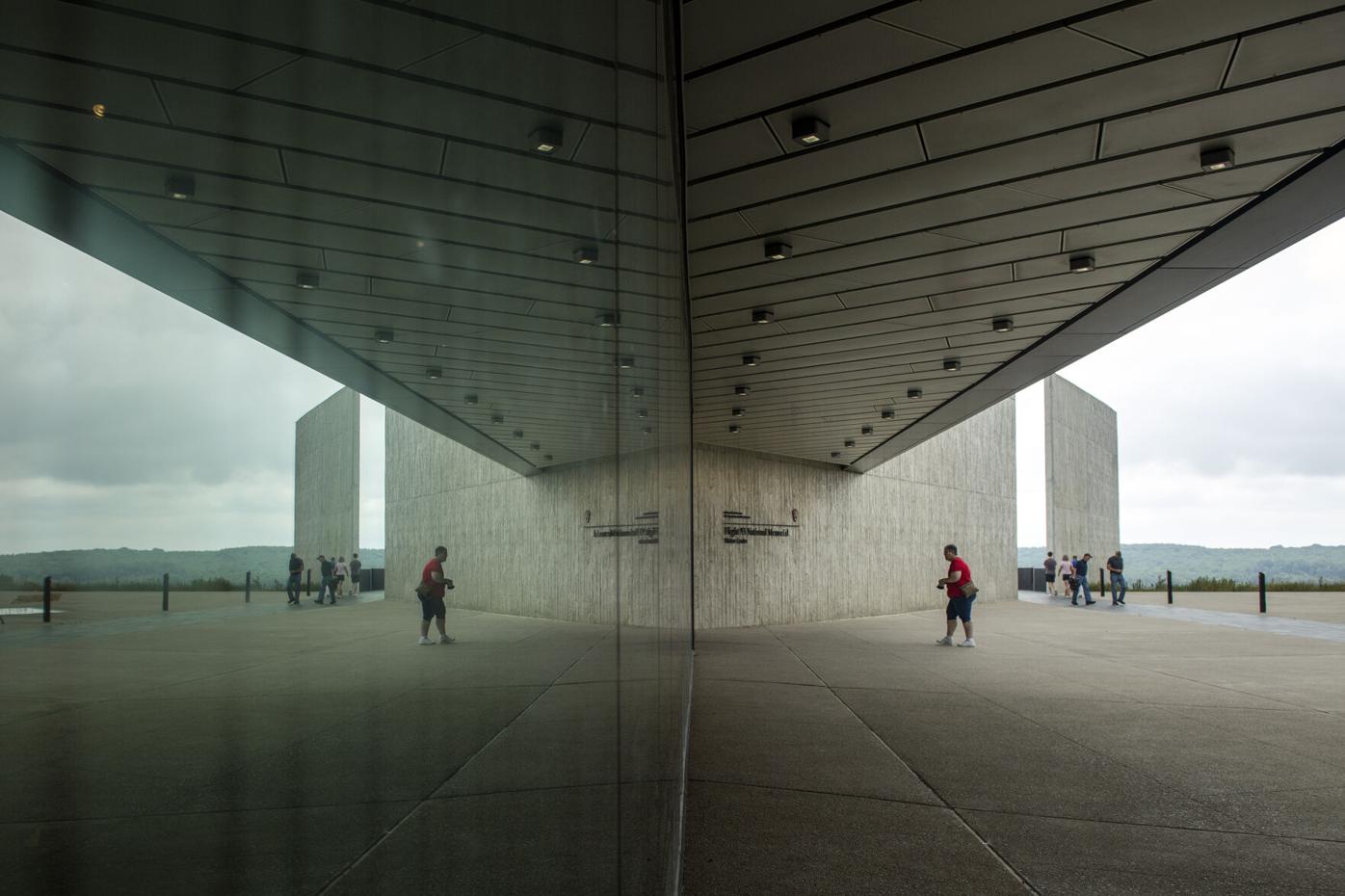 Visitors enter the Flight 93 National Memorial in Somerset County, Pennsylvania, nearly 20 years after 40 passenger and crew members died trying to take back control of a plane that was hijacked by al-Qaeda terrorists on September 11, 2001. The plane crashed in a field, saving the U.S. Capitol Building (the terrorists intended target) but killing everyone on board. 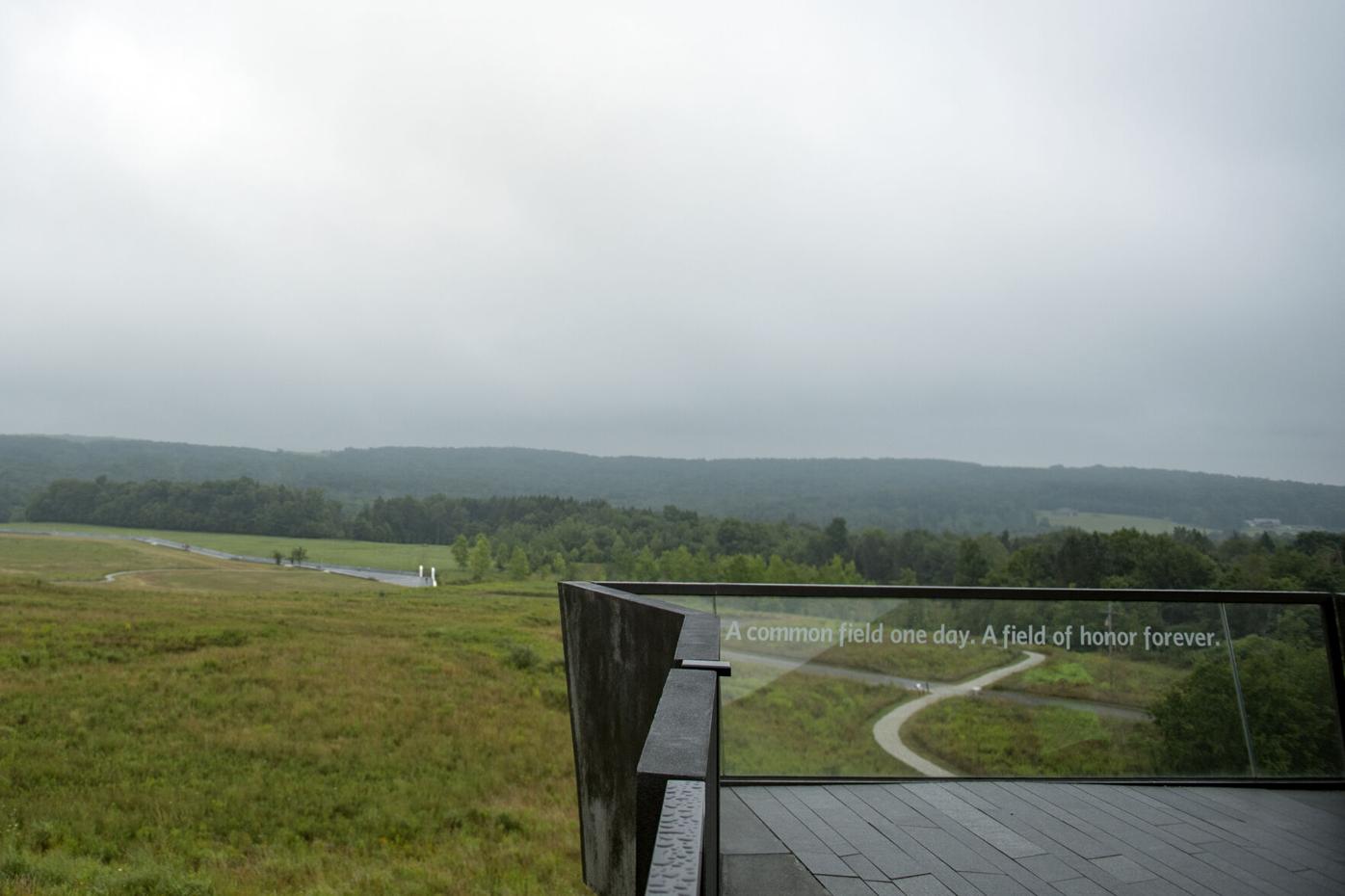 “A common field one day. A field of honor forever.” is seen written on the observation deck overlooking the flight path of United Airlines Flight 93 at the Flight 93 Memorial on Saturday, August 14, 2021. The plane crashed after passengers and crew tried to take back control after it was hijacked by al-Qaeda terrorists on September 11, 2001. The plane crashed in Somerset County, Pennsylvania, killing everyone on board.

In late 2020, NPR political reporter Scott Detrow was driving to cover a rally for former President Donald Trump in Latrobe, PA, when he made an impromptu trip to a spot he hadn’t visited in years – the newly completed Flight 93 Memorial. In taking a break from what he calls “the hellscape of the 2020 election,” Detrow, called up an old friend and coworker, Tim Lambert, with an idea to tell the story of Flight 93 once again for the 20th anniversary of the attacks of 9/11.

When did you first meet Tim, and was his 9/11 connection something you were aware of at the time?

I probably met Tim in the fall of 2007, I was just out of school and WITF was my first reporting job out of college. I showed up and Tim was this, you know, older co-worker who's kind of a 'show you the ropes' type. Everything from stop rolling your eyes in meetings to you need to shut up more - an older friend that is really important in that phase in your life. I think one of our very first conversations was, because he had just gotten a national award for a story he had done for the 5th anniversary of 9/11. It was right when I showed up - the plane crashed on his property, that's crazy.

And then I think it was a year later, the spring of 2008, driving back from Pittsburgh, he said, do you want to see the site? It was still his property at that point`, there wasn't much going on there at that point. He gave me a tour and it's something I'll never forget. And it's funny, at the time, six or seven years after 9/11, it seemed like so long ago. And the idea that we could still see wires on the ground, it was just so shocking. Like, how is that still there? And now that day seems like ancient history as well.

As a journalist, how did it change the assignment to have Tim there sort of straddling the line between journalist and subject?

At each interview, there was a moment where I realized that I needed to shut up. We would both be there, and I would ask a question - and these were really long conversations, so I think it changed as it went on - but at the beginning, I'd ask a question and I'd see the, 'You're just another reporter, I've talked to hundreds of reporters, I've been doing this for 20 years' look and get a sincere, but guarded answer. And then Tim would ask them something and they would open up to him like the friend that he is. Like, there was such a clear difference here.

In several interviews, I asked some of them about that because, yes, he's a reporter, and he's also someone that has been at these quiet, private gatherings with you, someone you've gotten to know. But a lot of them said yes, he's a reporter, but we view him as once of us, part of our community. It was so clear watching that that's the case. I'm so fortunate that it was, because it led people to take their guard down and be honest about some of the real challenges of the past 20 years.

What was the scope of the project at the onset, and how many interviews did you think you'd need to do to get what you were trying to get?

One of the challenges of the piece is that we're trying to tell several stories at once. Tim has this unique experience, and I think truly one of the most unique experiences of any journalist in America covering 9/11. It lands on his property, and he's suddenly in the middle of it. And there are scenes in the story, where Tim has to clarify, at this point, I wasn't there as a reporter, I was there as somebody's friend, and I wasn't recording or taking notes, but now 20 years later, we've talked about it and I'm reporting on it. So at times, Tim was co-reporter and almost subject of the piece, it was tricky. With the broader story, we obviously needed to tell the story about what happened on Flight 93, because I'm really mindful that 20 years is a long time and there's people who are probably only vaguely familiar with it.

One thing I love about the NPR Politics podcast is that our audience trends on the younger side, usually people in their 20s, so I was mindful that we needed to tell the story of what actually happened. And the third layer is, this is about 20 years of living without a brother, 20 years of living without a husband, and it's been so hard trying to explain that outside of the usual memorial service or the annual opportunities to pop up and tell their stories.

Do you see this as a national story, a local story or a combination of both?

I think it's a story about people from all over America, all over the world, suddenly finding this community in this place they've never heard of. It's so strange when you think of it, that the site where your family members died in a horrific way, to be the site where you find peace and solace and know exactly what you're going through? It's very weird that that's what happened. By and large, people found themselves drawn to Somerset County, being out in those woods being with each other and making sense of it all.

Obviously, a thing that is top of mind for a lot of people right now is Afghanistan again. As a political reporter in Washington D.C., how has it been juggling this story with somewhat overlapping current news?

It's...very strange. Take Friday - I'm working at the White House for NPR, Tim and I are recording final tracks for this piece, it took us two hours. Thinking about September 11th itself. And then I go upstairs and I'm at this press conference with Joe Biden, asking questions about the fact that the United States is still in Afghanistan and how chaotic the withdrawal has been. It has been incredibly strange to pull my brain back and forth between 2001 and 2021 multiple times a day over the past few weeks. It's an obvious part of the story, but it's really made it so clear to me that this isn't something that Joe Biden is doing, he is the last in 20 years of decision making that led to this point.

As you said, there's people out there who aren't as familiar with this story. It's been boiled down to something of a catch phrase, but what do you think are the actual mechanics of making sure people "never forget?"

I did a piece on 9/11 a few years ago, as well. I did the math on events that happened 17 years before I was born, and it came out to the assassination of MLK Jr. And I'm like, that always felt like ancient history. Especially for me, being a political reporter in Washington D.C., it's this feeling that Flight 93, understandably, has become this sidebar part of 9/11. It's a sidebar because these 40 people succeeded at what they tried to do. They stopped an attack that probably would have destroyed the United States capitol. And that would have been horrific on so many fronts.

In a span of 20 minutes, they come up with this plan and they succeed, and because of that, there's this remote field nobody has heard of and no one can really visualize, and that's the scene of the attack instead of another looping image of a tower collapsing or a plane flying into a landmark. I understand it, but I hope this piece can remind people of what they did, and the people that are alive and the buildings that are still there because of what they did.

On an overcast morning in August, Tim Lambert missed his exit off Route 30 near Shanksville.

'Something anybody would have done:' Lancaster County man recounts role in 9/11 maritime evacuation

What Mark Hershey remembers most about 9/11 was “the suits,” meaning the well-dressed execut…

'Could have been yesterday:’ Manor Twp. woman remembers son 20 killed in 9/11 tower collapse

For Judy Cook, there is nothing uniquely special about the two-decade mark.

Gregory G. Noll, of Manor Township, spent nine days at ground zero in the aftermath of the S…

20 years on, a child’s idea to honor a 9/11 victim still helps the less fortunate

In 1991, when Shannon Hickey was just 7 months old, she was very sick with a rare condition …

Marking the 20th anniversary of 9/11 is painful, but forgetting would be worse [editorial]