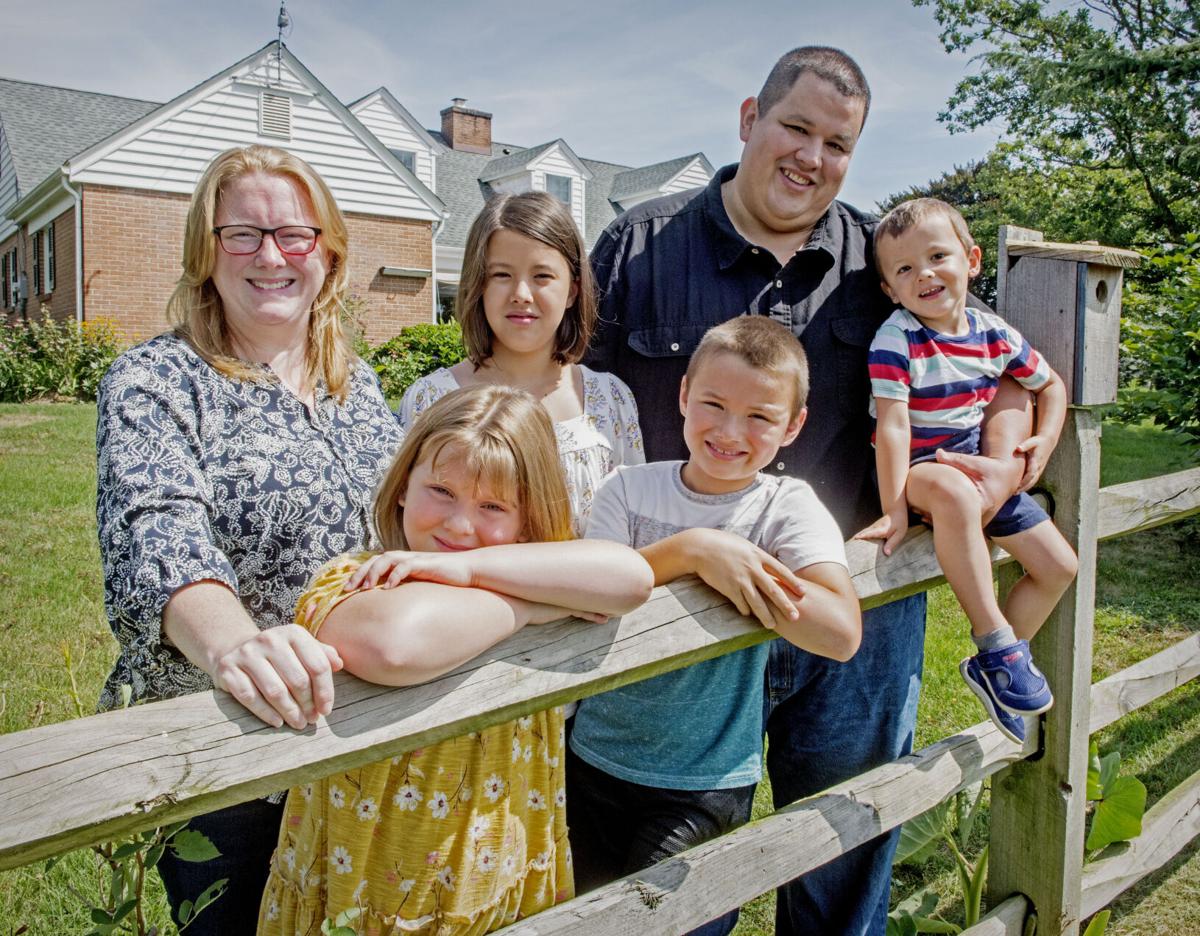 The Huacani family poses near their East Hempfield Township home Thursday, July 30, 2020. At the fence from left are: Grace 7, Garrett 9 and Josiah 3. Standing in back from left are Vanessa, Lily 11 and Matthew. 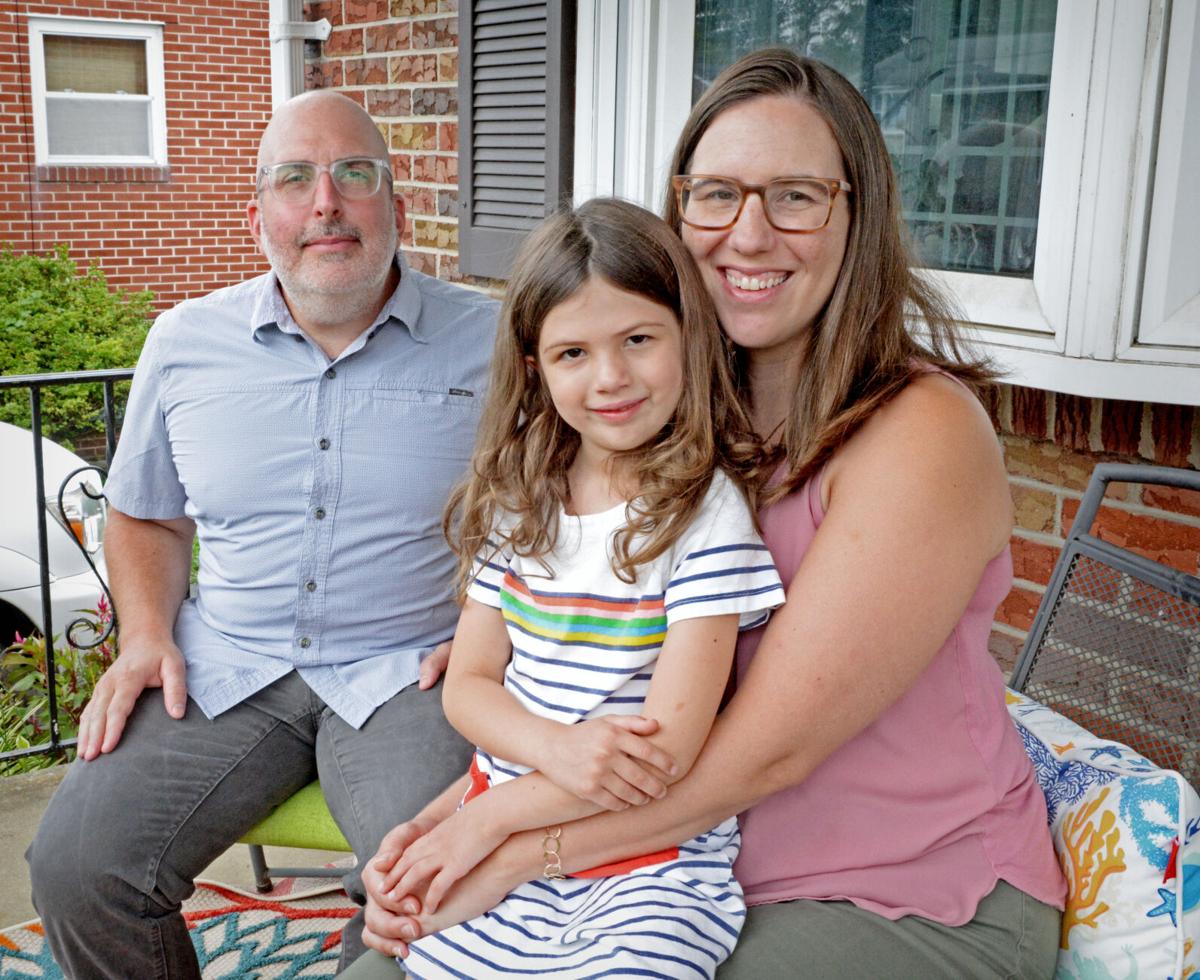 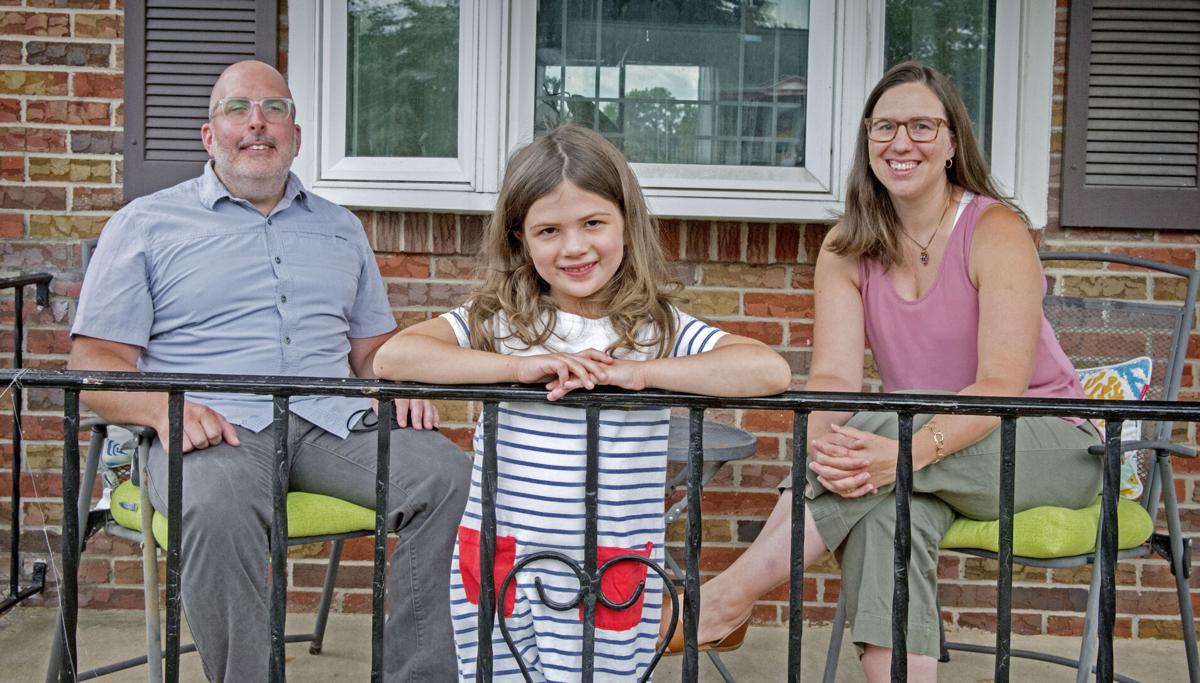 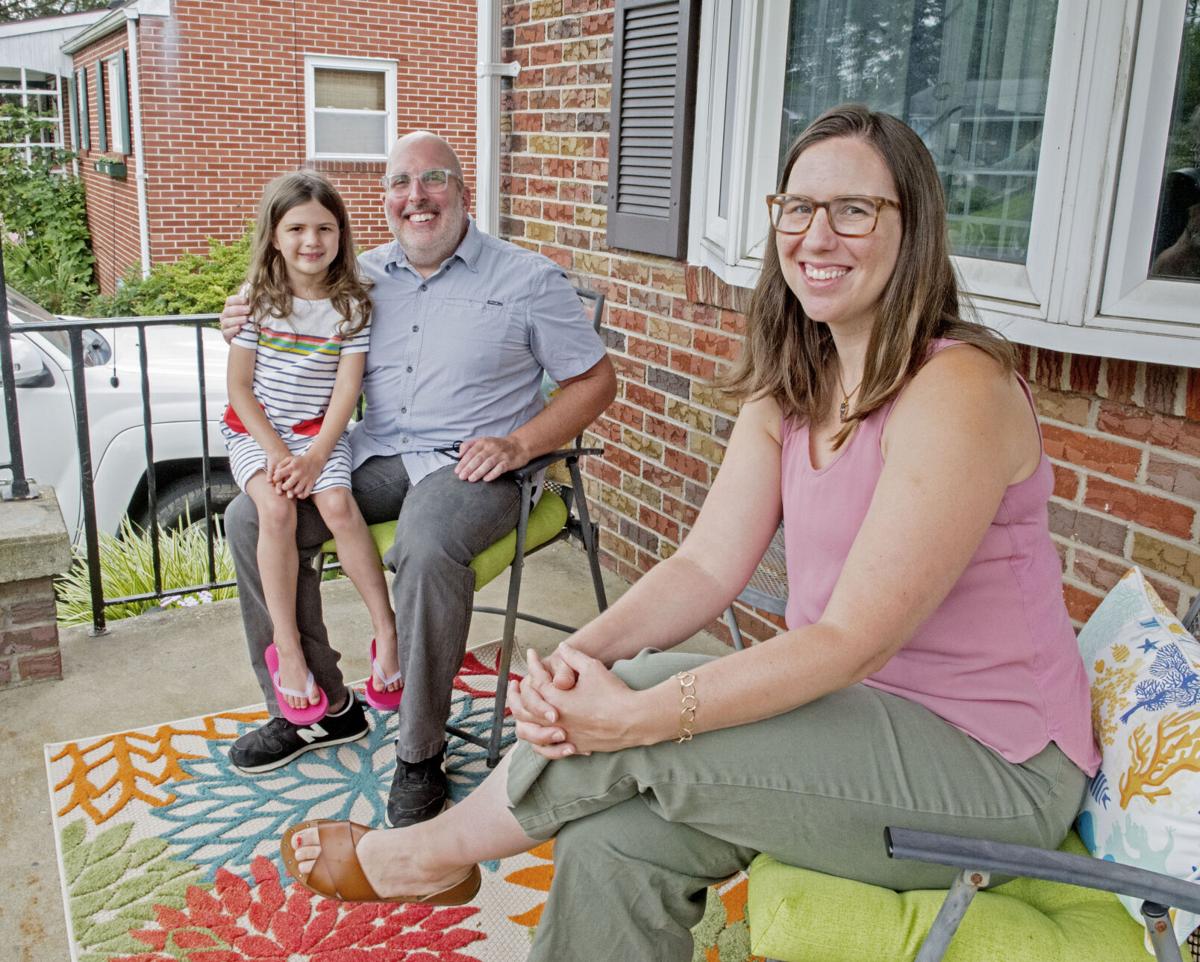 The Lancaster-Lebanon Intermediate Unit 13, with support from 22 school districts in Lancaster and Lebanon counties, have purchased 76 billboards to advertise each school district's online programs. 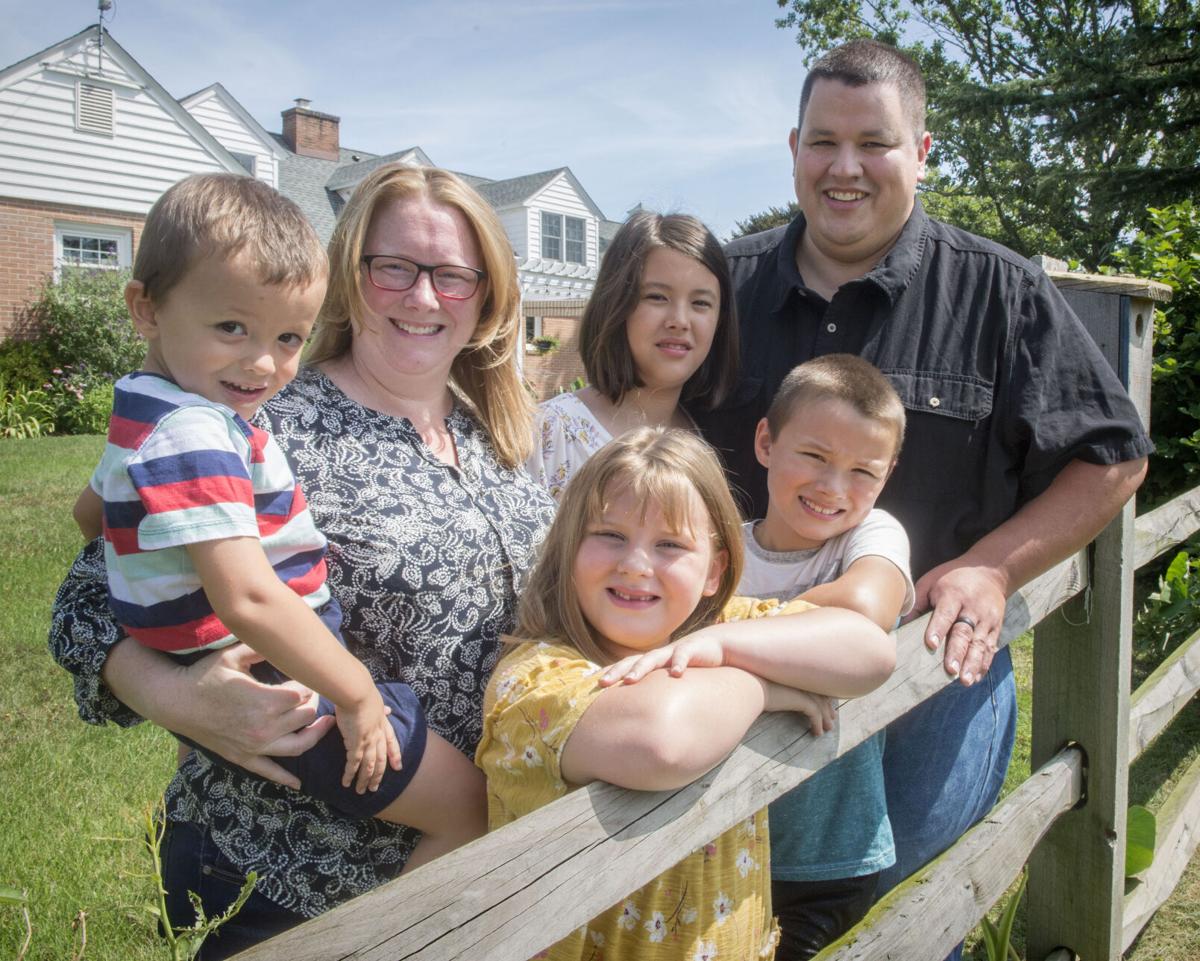 The Huacani family poses near their East Hempfield Township home Thursday, July 30, 2020. In the foregound is 7 year old Grace, left, and Garret, 9. In the back from left are Josiah , 3, Vanessa, Lily, 11, and Matthew.

The Huacani family poses near their East Hempfield Township home Thursday, July 30, 2020. At the fence from left are: Grace 7, Garrett 9 and Josiah 3. Standing in back from left are Vanessa, Lily 11 and Matthew.

For Vanessa Huacani’s two youngest children, the common cold could be deadly.

They suffer from a rare genetic disease called primary ciliary dyskinesia. Their cilia — tiny, hairlike structures that carry mucus toward the mouth to be coughed or sneezed out of the body — don’t work properly, causing bacteria and mucus to build inside their lungs and sinuses, increasing the risk of pneumonia and other serious complications.

So when Huacani and her husband, Matthew, who live in the Hempfield School District, had the choice of either sending their kids back to school for in-person instruction this fall or enrolling them in an online program, they decided it’s better to be safe than sorry.

It’s a decision with which thousands of Lancaster County parents are wrestling as new coronavirus cases surge in Pennsylvania and across the country. And no solution is perfect, Huacani and other parents told LNP | LancasterOnline.

Among the options: Potentially put children — and their families — at risk by sending them back to school or enroll them in a potentially watered down, but likely safer, online option.

Those decisions, of great importance in the household, also have ripple effects throughout the community.

Lancaster County schools, which have launched an unprecedented campaign advertising their own online options, face an imposing threat: cyber charter schools, which have decades of experience educating kids online, that are ready to gobble up families who seek an online program outside their home districts.

With every student who enrolls in a privately run but publicly funded cyber charter school is a chunk — anywhere from $10,000 to $32,000 — taken out of the home school district’s budget.

“We are competing against a business of cyber charters who spend millions and millions of dollars on advertising, and we don’t use taxpayer money that way,” School District of Lancaster Superintendent Damaris Rau said in a video interview Tuesday.

Lancaster is one of 16 county school districts in the Lancaster-Lebanon Intermediate Unit 13 that’s taking part in a $60,000 campaign, including billboards and online and print advertisements, spreading awareness for each district’s online program.

About 60% of the costs are being covered by the intermediate unit without the use of taxpayer money.

“If they choose a cyber charter school, then it’s because they don’t know about ours,” Rau said.

About 1,000 families who were surveyed by the 11,000-student district this summer expressed interest in the district’s online program, called Cyber Pathways, Rau said. If all of those families were to choose Cyber Pathways rather than a cyber charter school not affiliated with the district, Rau said it could save the district around $20 million.

The district’s online program, which is coordinated by the IU13 through its Lancaster-Lebanon Virtual Solutions service, launched in 2012 for grades six through 12. It will serve all grades starting this fall.

While courses are not taught by the district’s teachers, they’re facilitated by certified educators provided by the IU13. The curriculum is similar to that taught in traditional classes, but not identical. Students in Cyber Pathways are assigned cyber advisers within the district and can still participate in extracurriculars and receive a McCaskey diploma upon graduation.

Not all Lancaster County school districts set up their online programs the same way. Most use the IU13’s service, but some use it in combination with their own teachers and curriculum. Others run their own independent from the IU13.

Generally, the fee per student for Cyber Pathways and other online programs affiliated with Lancaster County school districts costs schools about 60% less than losing a student to an unaffiliated cyber charter school, according to IU13 Executive Director Brian Barnhart.

Manheim Township School District, the third largest school district behind Lancaster and Hempfield, expanded its online program, called Manheim Township Virtual Academy and coordinated by the IU13, to serve all grades this past school year.

“We do not want any of our families feeling like they need to leave our school district for a cyber charter school since we offer the same educational programming in our virtual academy, and also offer opportunities for students to remain connected with their student’s school as part of the process,” Manheim Township Superintendent Robin Felty said in an email.

How might school look in the fall? Pequea Valley's educational video has your answer

The small, rural Pequea Valley School District, meanwhile, decided to post a video showing how school might look this fall to help parents decide which route to take with their kids.

The video shows students walking through the hallways with masks on, washing their hands for 20 seconds, sitting in class and in the cafeteria six feet apart, and taking “mask breaks” when they’re appropriately distanced from others.

“I just think it’s important that the parents understand what the schools are doing, and that was the reason behind the video, just to try and be as transparent as we can,” district Superintendent Erik Orndorff said.

As parents weigh options for their children's return to school, let's unpack what each option actually means.

Public school’s online program: Each school district has its own online program, which is free to families and can be coordinated by the Lancaster-Lebanon Intermediate Unit 13 or district staff.

Cyber charter school: A publicly funded but privately run school that offers online-only instruction and, in some cases, tutoring, counseling and other support services. While there is no tuition cost for families, school districts must send an amount no less than its per-student expenditure for either a nonspecial education student or special education student to the cyber charter school whenever a student from the district enrolls in one.

Private school: A privately run school that is funded mainly by charging tuition. Some private schools, such as Lancaster Mennonite, also have their own online options.

Home-school: An education program conducted by a qualified tutor or a parent or guardian in compliance with Pennsylvania’s compulsory school attendance laws. Some families may choose to band together to create “pods” or “microschools” at home.

‘Unschooling’: A more flexible version of home-school in which children learn primarily by living and engaging in their own interests within the confines of the state’s home-school law.

‘Nothing about this is easy’

For some families, the intermediate unit’s campaign seems to be working.

Anna Kennedy, 41, of Lancaster Township, plans to enroll her daughter, Mia, a rising first grader, in Cyber Pathways. She chose that instead of Lancaster’s hybrid plan, which would offer a mixture of both in-person and online learning.

“It just didn’t seem appropriate to potentially expose our family to the risk of infection for only having those 12 hours a week, basically, of in-person instruction,” Kennedy said.

To minimize the social downsides of virtual school, Kennedy said she plans to get together with two other families so the kids, who she said really miss playing with their friends, can work with each other on their online assignments.

“It’s not ideal,” she said, “but I think it’s the best decision for our children.”

Kennedy, who is the executive director for the Lancaster Osteopathic Health Foundation, said she realizes she’s privileged to be able to work from home and watch the kids.

Keeping her tax dollars within the district, rather than redirecting funding to a cyber charter school, and having an opportunity to seamlessly transition back to in-person school once she considers it safe were two important decision-making factors for her, Kennedy said.

Kristy Moore, of Mount Joy Township in the Elizabethtown Area School District, also plans to enroll her kids — Katie, a rising second grader, and Ellis, who will be in kindergarten — in her district’s online program, called EASD Online.

It’s a better option than worrying if kids are correctly wearing their masks and social distancing in school, Moore, 36, said.

Cyber charter school wasn’t an option because she didn’t want to help “bankrupt our districts,” said Moore, an English teacher at a local school district.

“This is all hard. Nothing about this is easy,” Moore said. “But we have to continue to support our public schools if we want them to be here once this is over.”

Experience is a factor

Some families, however, feel more comfortable opting for cyber charter schools that have decades of experience educating students and offering support services like tutoring and counseling solely online, albeit their somewhat shoddy academic track record.

At the Pennsylvania Cyber Charter School, the state’s largest cyber charter school with about 10,500 students, enrollment has been “explosive,” according to CEO Brian Hayden.

The school is currently receiving more than 1,000 inquiries a week, Hayden said. It had to shift about 40 employees from their regular jobs just to help with enrollment.

Last year on July 26, the school had approved 540 new applications. This year it has approved 1,453, Hayden said.

Parents, he said, are looking for a safe alternative for kids and to avoid another poor experience some families had starting in March when the pandemic forced school districts online.

“We’ve been doing this for 20 years, Hayden said. “We didn’t just start this in February.”

While Lancaster County school districts have offered online programs for some time, many just expanded their programs to every grade this year.

For Vanessa Huacani, who is sending her kids to Pennsylvania Cyber Charter School, that’s what persuaded her to pass on another public school-run online option.

She said online learning last year, when her children went to a small private Christian school, was “a mess.”

“If we’re going to send our kids to cyber school,” she said, “why not send them to people who know and have experience in what they’re doing?”

Lancaster County is home to 32 nursing homes, one of which has accumulated the highest number of deaths in the state; Conestoga View.

Once again, politics and divisiveness rear their ugly heads when it comes to education and today’s critical pandemic situation of school build…

Less than three weeks before students were expected to return in phases for in-person instruction, School District of Lancaster has shifted gears and now plans to begin the school year solely online.