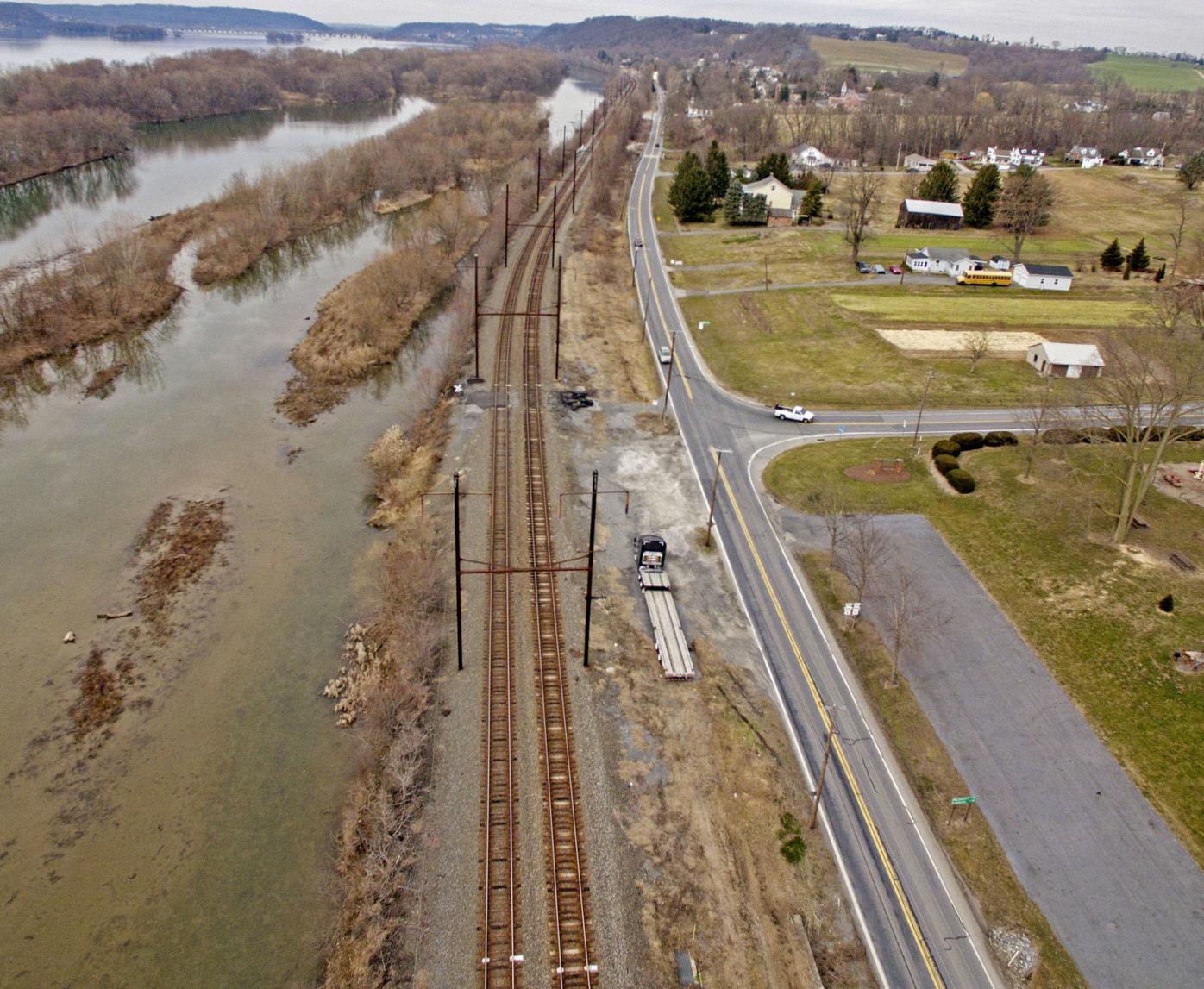 This aerial view is looking north along Route 441 from the Washington Boro Park in Manor Township Monday, Feb. 24, 2020. This area is a possible future home for a trail that would connect the Northwest Lancaster County River Trail and the Enola Low Grade Rail Trail. 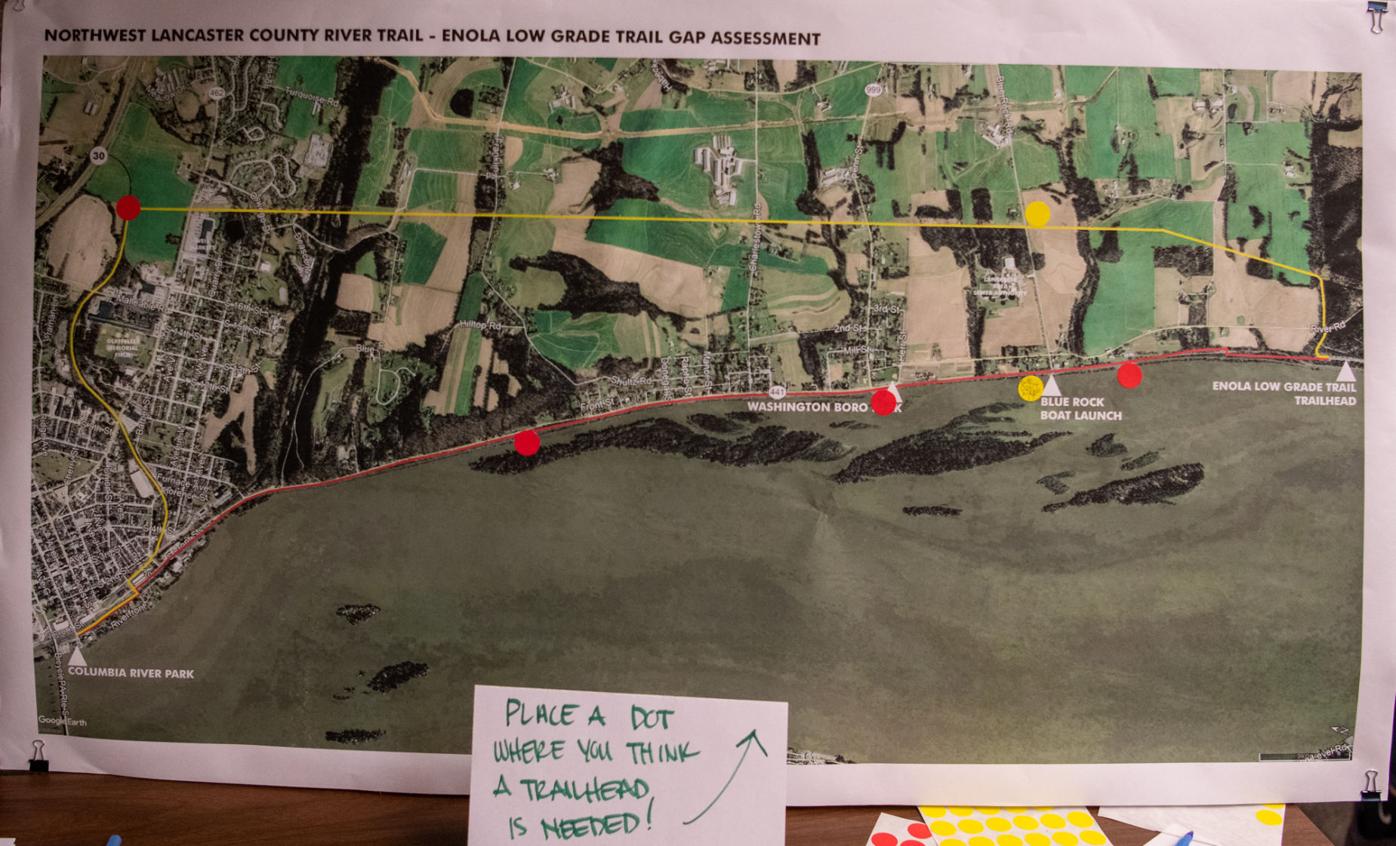 A rendering of the two proposed trail locations was on hand for people attending the meeting to see. Attendees were asked to mark where they thought the trail should go. Manor Township hosted a meeting to review two proposed alternatives to link the Northwest Lancaster County River Trail from its southern endpoint in Columbia to the Manor Township Enola Low Grade Rail Trail on Monday evening Feb. 24, 2020. 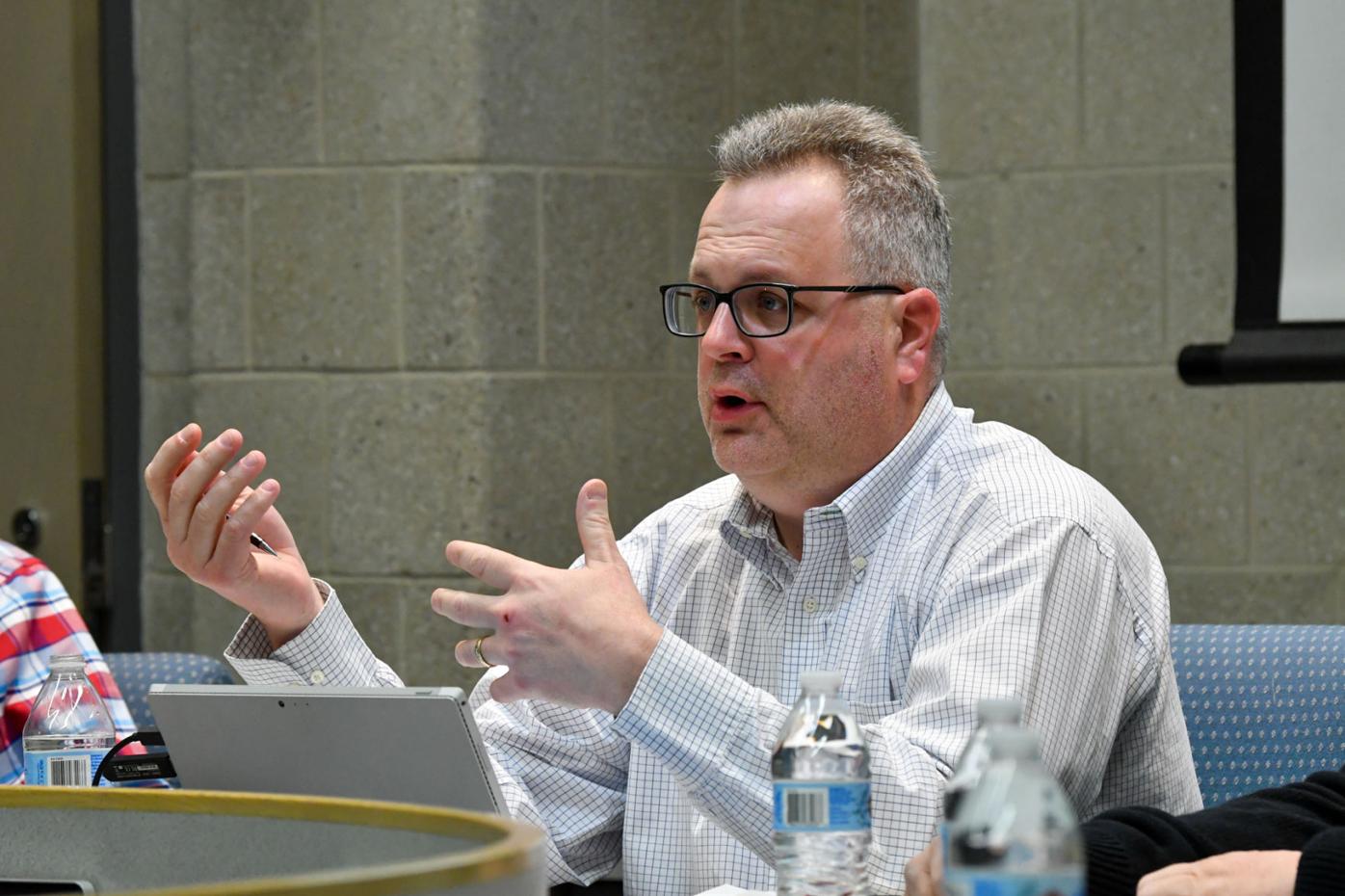 Ryan Strohecker, Manor Township Manager, spoke to the crowd of over 40 people about the trail options and tried to address their concerns and comments. Manor Township hosted a meeting to review two proposed alternatives to link the Northwest Lancaster County River Trail from its southern endpoint in Columbia to the Manor Township Enola Low Grade Rail Trail on Monday evening February 24, 2020. 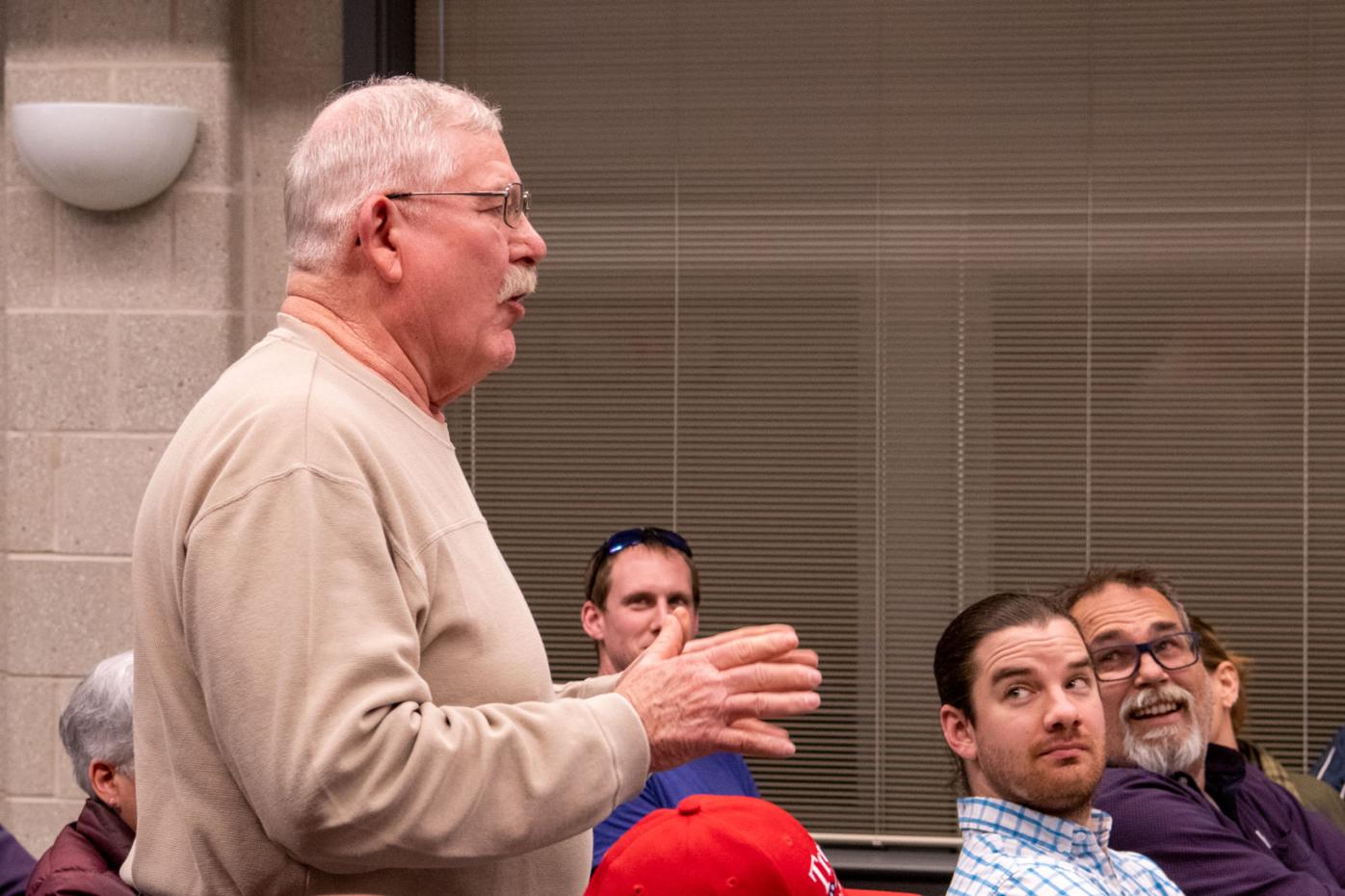 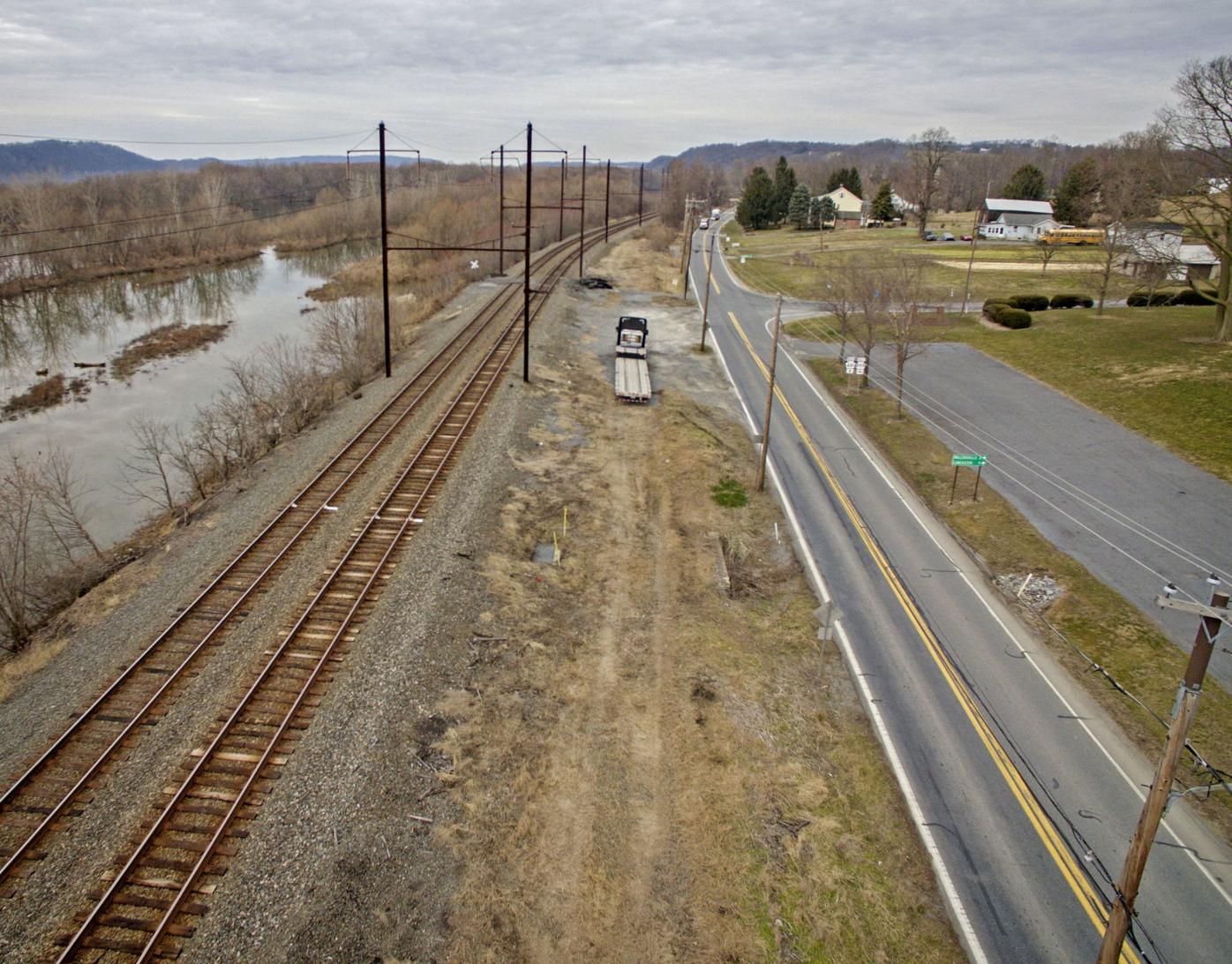 This aerial view is the railroad across Route 441 from the Washington Boro Park in Manor Township Monday, Feb. 24, 2020. This area is a possible future home for a trail that would connect the Northwest Lancaster County River Trail and the Enola Low Grade Rail Trail.

A $50,000 study continues to examine whether a five-mile trail can be built between Columbia and Washington Boro to connect two existing recreation paths in western Lancaster County.

But officials at railroad company Norfolk Southern said they already have the answer, and it’s time to put on the brakes.

“Norfolk Southern has advised that this project is not feasible due to safety and liability reasons,” railroad spokeswoman Rachel McDonnell Bradshaw said.

It’s a response that came as no surprise to municipal officials and their consultants, who had already been warned against trail-extension proposals that would border and cross Norfolk Southern tracks.

Still, they plan to move forward with the study in hopes that they can address Norfolk Southern’s biggest concerns.

At issue is a proposed trail-extension project that would link the 14-mile Northwest Lancaster County River Trail, which ends in Columbia Borough, to the 23-mile Enola Low Grade Trail, which begins in Manor Township.

Between the two is a five-mile trailless expanse, and according to Strohecker, it’s a gap that Lancaster County planners want to see filled.

The first would connect the two existing trails with a straight five-mile path running along the Susquehanna River between Route 441 and the Norfolk Southern rail line.

A second option would take the path northeast from the Enola Low Grade Trail along an existing PPL Electric Utilities easement before banking west through Columbia to connect with the Northwest Lancaster County River Trail — a total distance of about seven miles.

The first option was an overwhelming favorite among more than 600 people who provided feedback about the project through an online survey. That’s likely due to its direct, flat route between the two existing trails, Strohecker said.

Despite that enthusiasm, Norfolk Southern officials said it can’t be built.

“Norfolk Southern does not allow its active railroad property to be used for recreational purposes,” Bradshaw said.

Bradshaw would not elaborate, but Andrew Schwartz, with Environmental Planning & Design, provided some insight on Norfolk Southern's concerns.

Schwartz stressed that the trail would not be built atop any railroad-owned property, and any needed land would be purchased.

He acknowledged, however, that the trail would have to run closely along the tracks in a narrow space between the rail line and Route 441. And at some places, especially near Columbia, the trail would be much closer to the tracks than railroad officials deem safe, Schwartz said.

The tracks also would be at a higher elevation than the trail, and railroad officials are worried trains could come spilling down on top of pedestrians and cyclists in the case of a derailment, Schwartz said.

“They don’t want to be liable for people who are using the trail,” Schwartz said.

The second option, which has been criticized for its steep, strenuous elevations, also would cross and briefly border rail lines, Schwartz said, though it would mostly follow the PPL easement.

Jess Baker, a PPL spokeswoman, said the company has permitted similar trail projects along its easements in the past. Trail builders must first file plans with PPL officials to show that users will remain safe while traveling along easements, she said.

“We wouldn’t want the trail directly under the electrical wires,” Baker said.

To Columbia Mayor Leo Lutz, the second option seems like the better of the two. It could even be coupled with a bike route along Route 441, which could span the gap between the existing trails while avoiding the railroad, he said.

Lutz has firsthand experience working with Norfolk Southern from years ago, when the Northwest Lancaster County River Trail was built along the tracks.

In that case, there was much more buffer space, but municipal officials still had to agree to install fencing and close off some crossings, Lutz said.

Fencing can drastically add to a project’s cost, he said.

The current study is being funded by $25,000 in state Department of Conservation & Natural Resources grant funds, as well as a $25,000 donation from officials at the Lancaster County Solid Waste Management Authority.

Strohecker guessed the trail-extension project could cost upward of $10 million, which the township couldn’t afford on its own. He said grant dollars will be aggressively pursued.

Lutz said he hopes Norfolk Southern’s concerns can be addressed, and the project can move forward.

“They’ll play hardball, but they will listen,” Lutz said.

Bear, a chocolate Lab that works with the Lancaster County Drug Task Force and has helped detectives seize heroin, cocaine, marijuana and othe…

The way Phil Wenger tells it, Lancaster Conservancy officials got a call from a Realtor, who warned that a wooded property was posted for sale…

Fritz Schroeder said he knew the news would make for an eye-catching headline: Tucquan Glen Nature Preserve had been largely closed to the pub…

'Kind of an eyesore': $237,000 grant earmarked for upgrades to popular Lancaster County trail