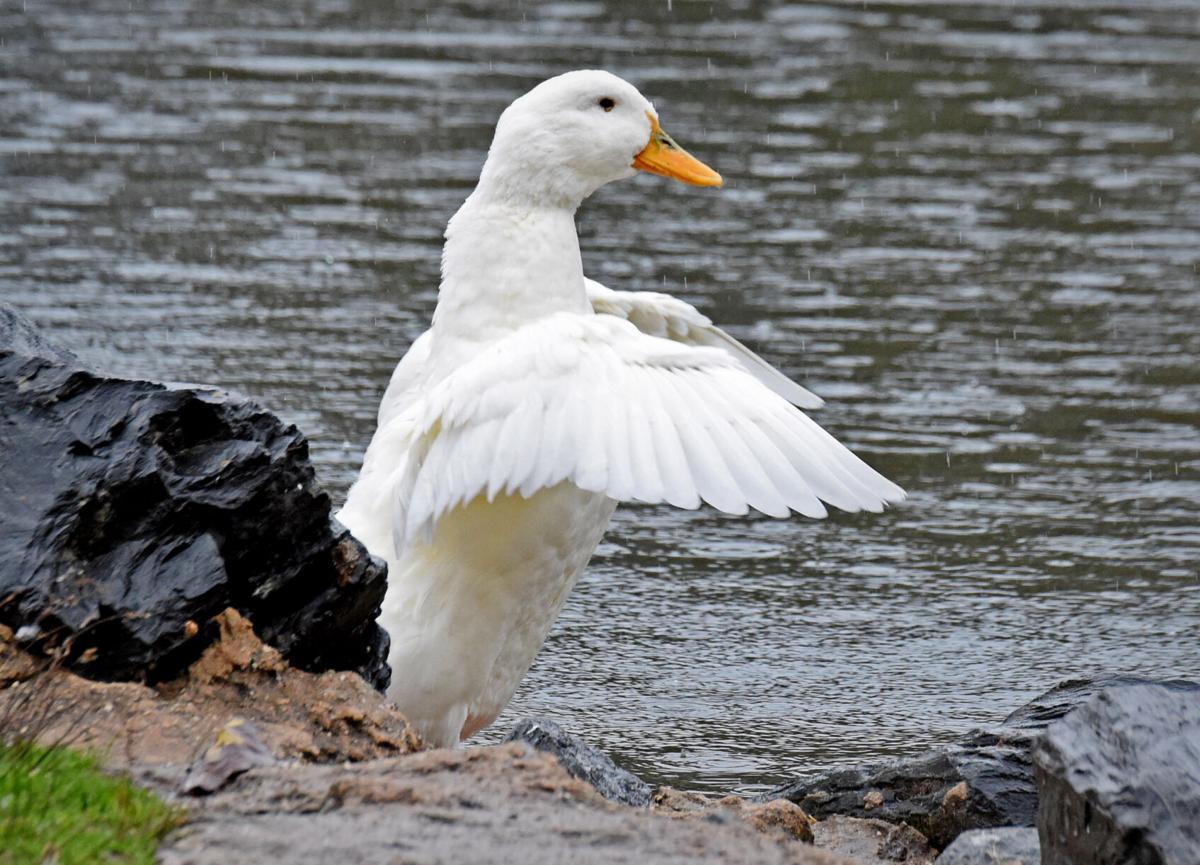 A duck flaps its wings while standing along the shoreline of the lake at Long's Park in Lancaster city Wednesday, Nov. 11, 2020. 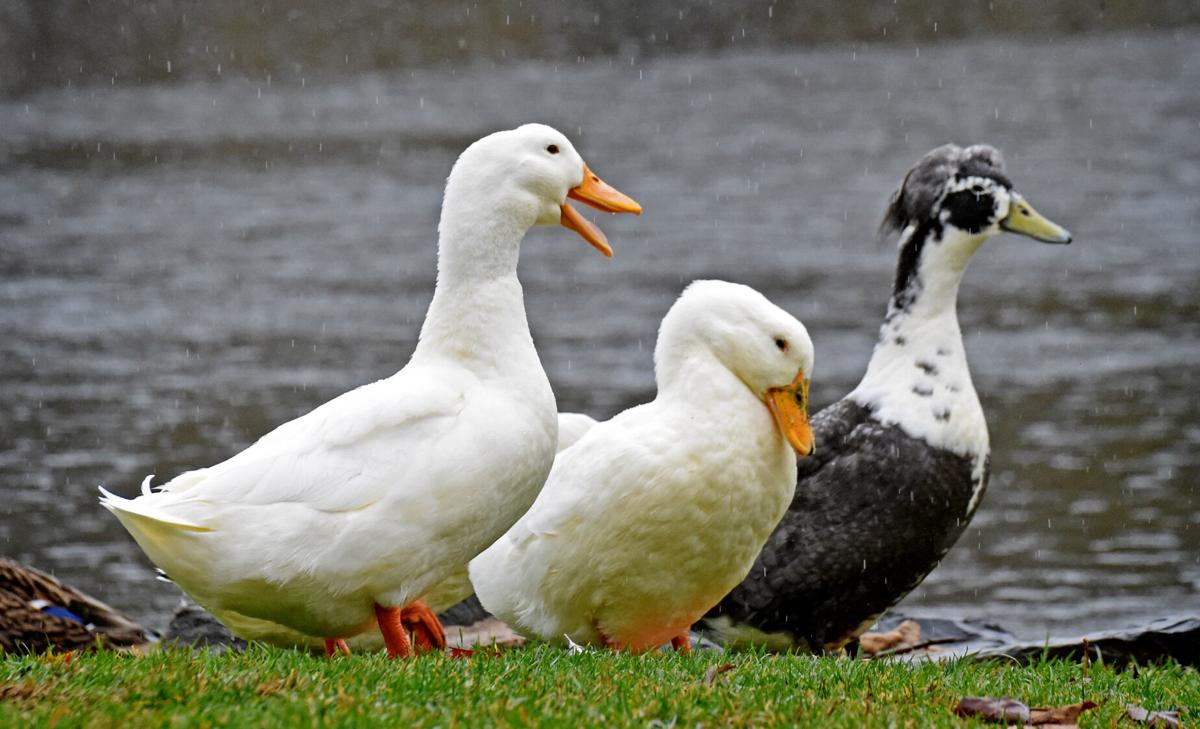 Ducks stand along the shoreline of the lake at Long's Park in Lancaster city Wednesday, Nov. 11, 2020. 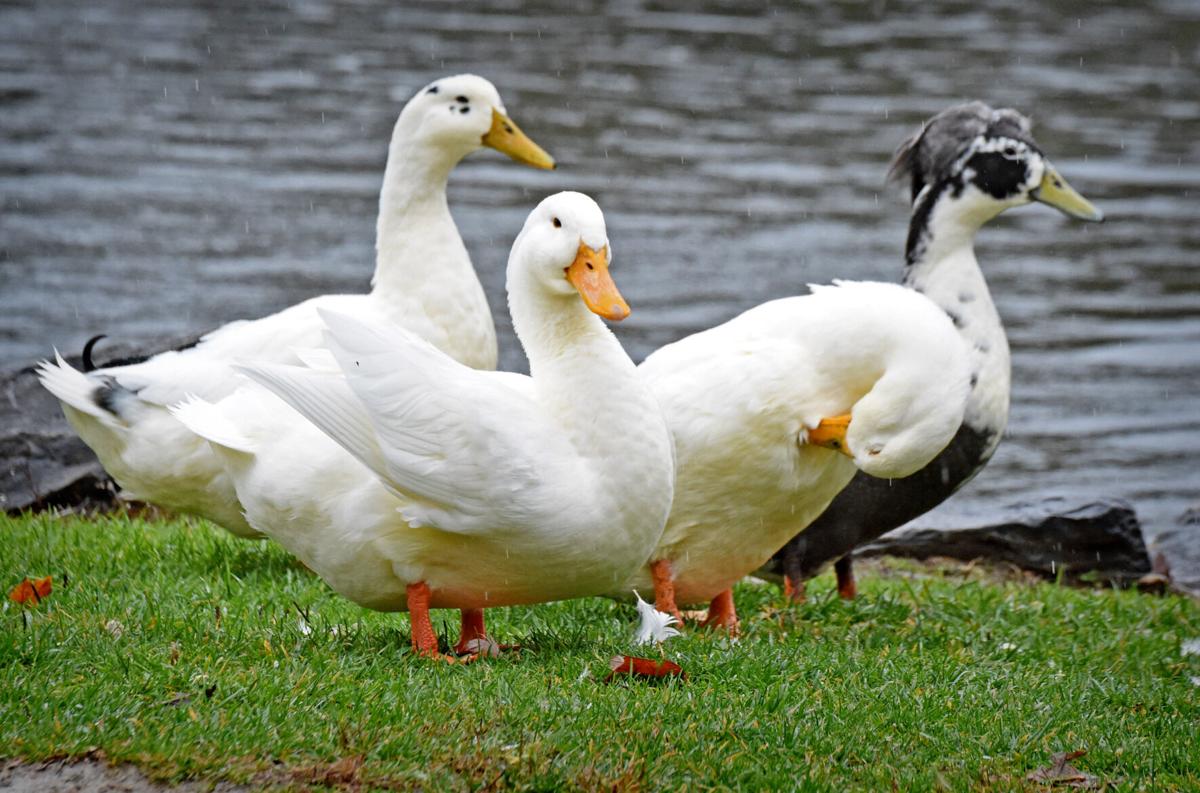 Ducks walk along the shoreline of the lake at Long's Park in Lancaster city Wednesday, Nov. 11, 2020.

Steady rain fell late Wednesday morning, sending ripples across the surface of the lake at Long’s Park in Lancaster city, where dozens of ducks swam, occasionally bending their necks to dunk their heads.

Along the shoreline, a smaller group waddled near a park bench, standing out on the gray, dreary day due to their bright white feathers and orange beaks.

Since last month, those light-colored birds have attracted the attention of a New York-based animal advocate, who says the ducks need to be removed from the 80-acre park in the northwestern end of the city.

City officials did not immediately agree.

The duck’s light color is a dead giveaway that they are actually domesticated birds, dumped by former owners into the park, where they lack the wild instincts needed to thrive, said advocate Jessica Hope Zafonte, with the group They All Want to Live.

“Domestic ducks are very different than wild ducks and cannot fly and have no survival skills. They don’t know how to forage for food and rely on humans to feed them,” she said. “This dumping is a common occurrence, and these ducks are generally killed by predators and have otherwise short and painful lives.”

She compared them to pet dogs or cats left to fend for themselves in the wild.

It’s for those reasons that Zafonte said she contacted city officials asking permission to remove the domesticated ducks before tending to their needs and finding them appropriate homes. Similar duck rescues have been carried out by her group on public grounds in multiple states, including in New York City’s Central Park, she said, pointing to a track record of success.

City: No need to intervene

As of Wednesday afternoon, city officials had declined Zafonte’s offer, with no immediate evidence that the ducks need to be removed, said Ryan Hunter, Lancaster’s manager of parks and public property.

“The city does not feel that there is sufficient need to intervene in this wild bird population at this time,” he said Wednesday.

He issued a similar response to Zafonte in an earlier email exchange.

“While we recognize and commend your diligence and outreach in this regard, after review and consideration we do not feel that there is sufficient need to intervene in this wild bird population ... On the rare occasion that concerns regarding the care and safety of individual ducks have arisen, our staff has engaged — and will continue to engage — qualified local wildlife control specialists,” the exchanged reads.

That stance is troubling, Zafonte said, especially with winter’s cold weather approaching. While the wild, migratory ducks will be able to fly away, the domesticated birds will be stuck at Long’s Park. There, they’ll be forced to contend with a dwindling food supply and freezing waters, which can sometimes trap the animals, she said.

“It’s a big scramble because we’ll be dealing with the freezing of the water,” Zafonte said.

That’s all on top of their increased vulnerability to predators — hawks, raccoons, foxes and snapping turtles, Zafonte said. She laid all of those concerns out in a four-page letter sent to city officials Oct. 12.

According to Hunter, city officials don’t share the same concerns. In-lake “bubblers” keep water moving, preventing at least a portion of the body of water from freezing, he said — though Zafonte has said those spaces aren’t large enough.

And at about 35 birds, the park’s duck population has remained steady in size for at least the past five years, Hunter said.

“The full-time Long’s Park staff have reported recovery of zero dead ducks in the past five years,” he said.

“Prior to receipt of these concerns there have been no reported complaints or observed incidences of ducks being dumped or abandoned in Long’s Park,” he said, elaborating later. “The city does not purchase domesticated ducks for residence at Long’s Park and never has. Permission for third parties to place or transplant domesticated ducks to Long’s Park has similarly never been granted.”

Still, Zafonte maintains she has been in contact with at least one regular Long’s Park visitor, who first made her aware of what she described as sick and injured domesticated ducks at the park. The visitor was unwilling to speak with reporters about the issue, Zafonte said.

“It’s depressing to people who go to visit the park,” said Zafonte, adding she is certain the light-colored ducks are domesticated.

She imagined a scenario where the ducks were possibly dumped off by parents who purchased ducklings as pets for their children, only to find that the birds grow into large, messy adults not easy to care for indoors or even in backyards.

Others may have been meat animals purchased during grocery shortages at the start of the COVID-19 pandemic and later released when stores were restocked, she guessed.

As of this week, Zafonte’s concerns have not been resolved, though she said she plans to continue pressing the issue.

“The Parks Bureau has begun the process of engaging both the USDA Wildlife Services Division as well as US Fish & Wildlife Service for their perspective on this situation and will follow the guidance they issue,” he said.

Wind gusts could cause power outages, down tree limbs as cold front moves into Lancaster County

Strong winds predicted for Lancaster County this afternoon could lead to falling tree limbs and power outages, according to weather forecaster…