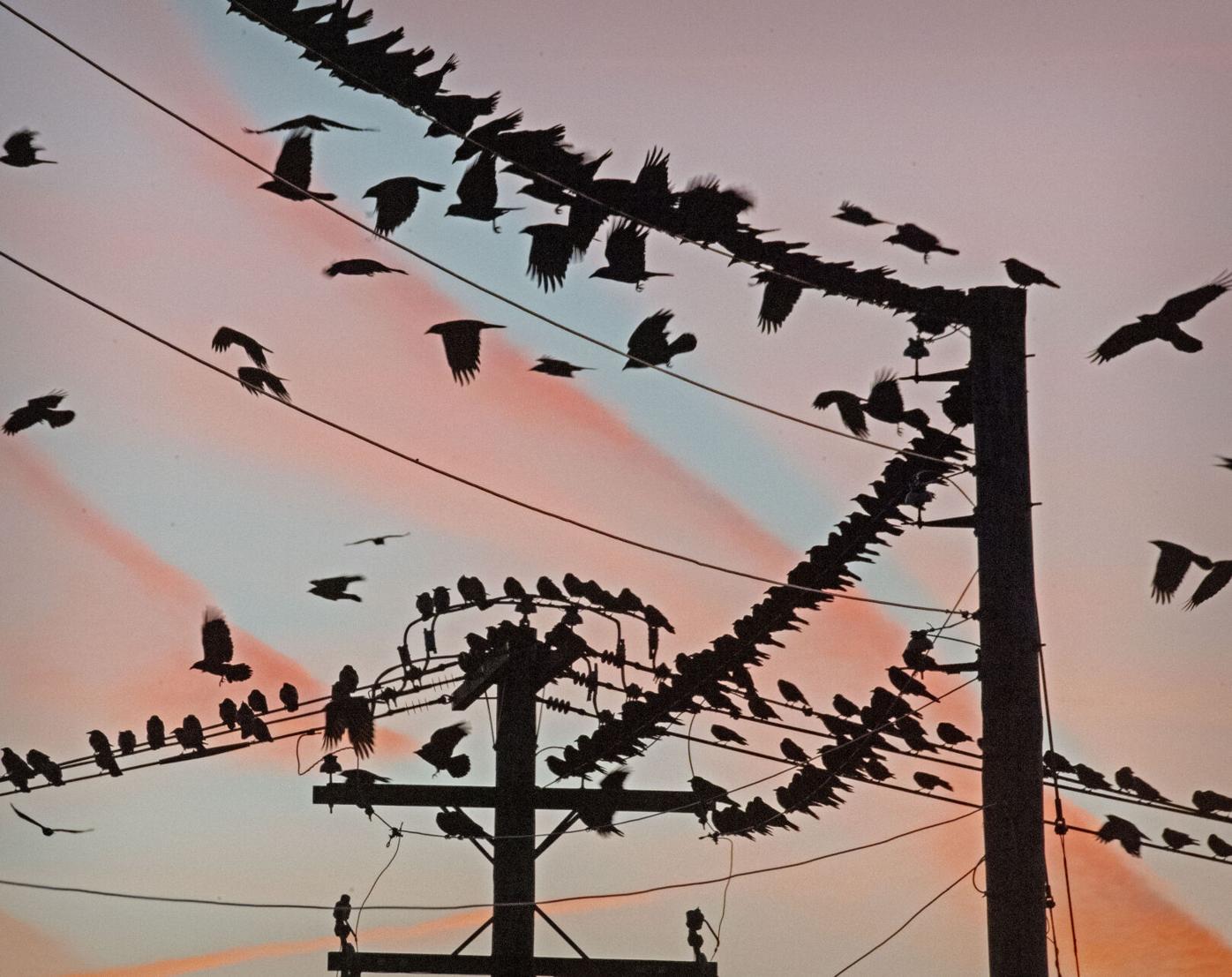 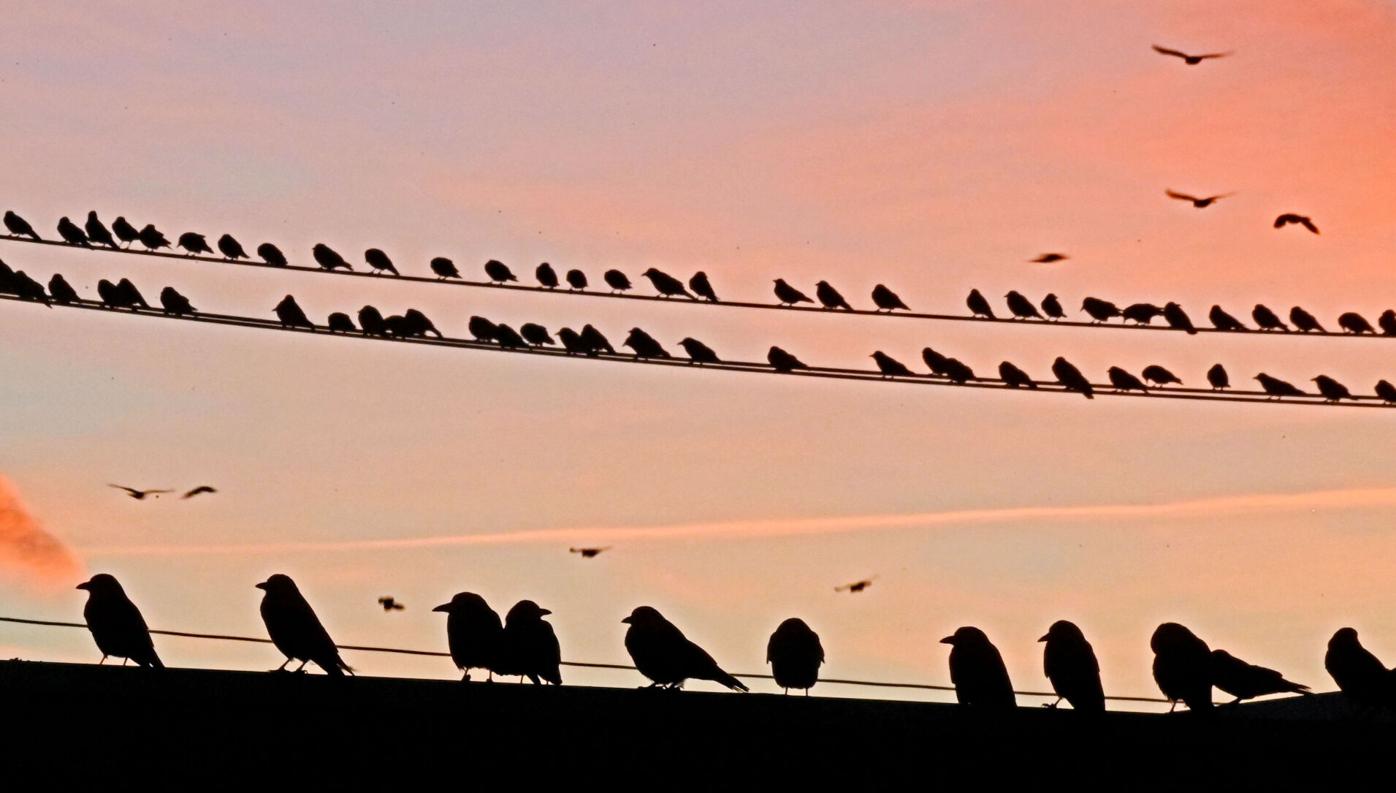 Crows stand on the roof of S&T bank 2055 Fruitville Pike in Manheim Township, foreground, Tuesday, Jan. 4, 2022. The crows in the background are on wires over Fruitville Pike. 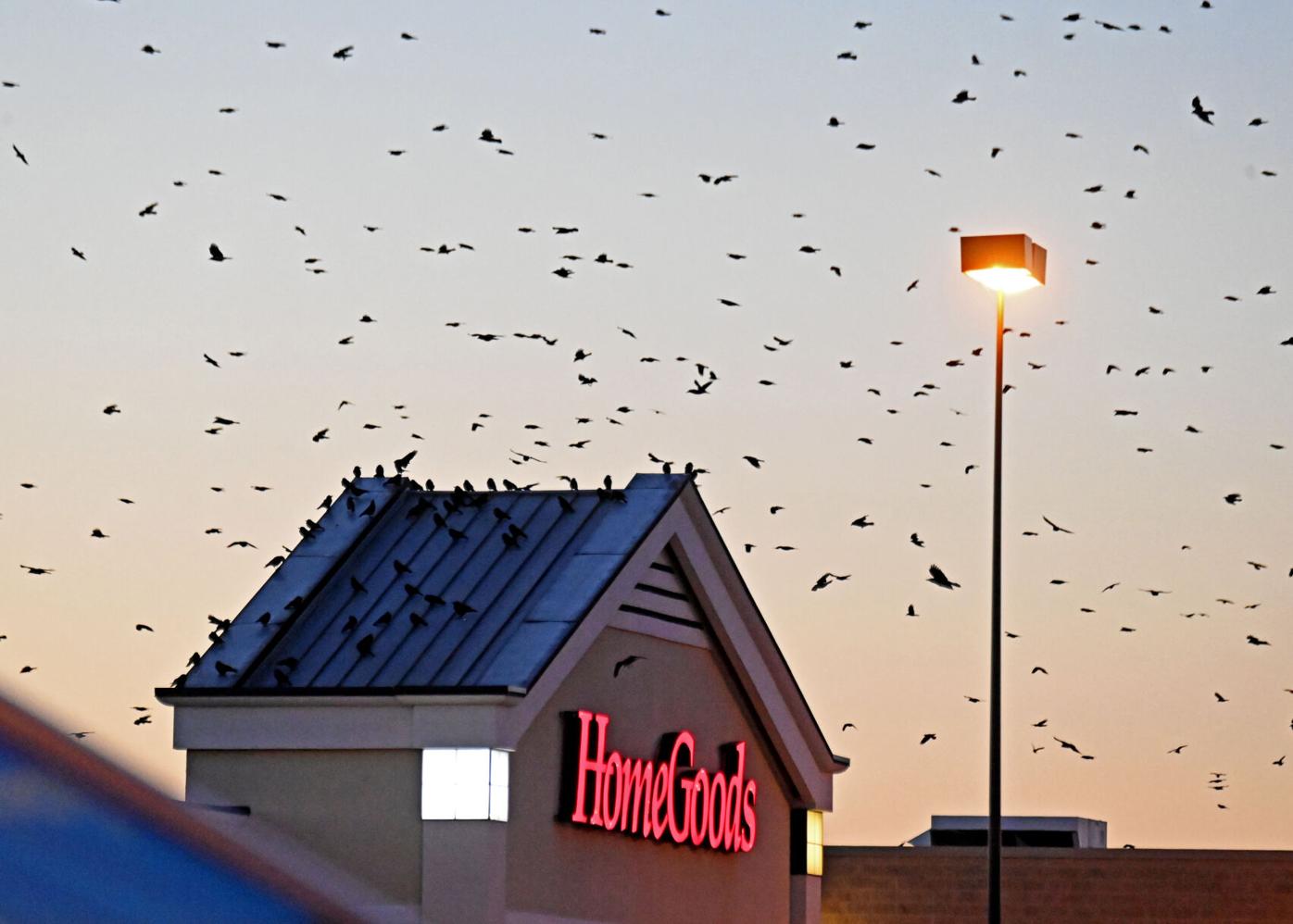 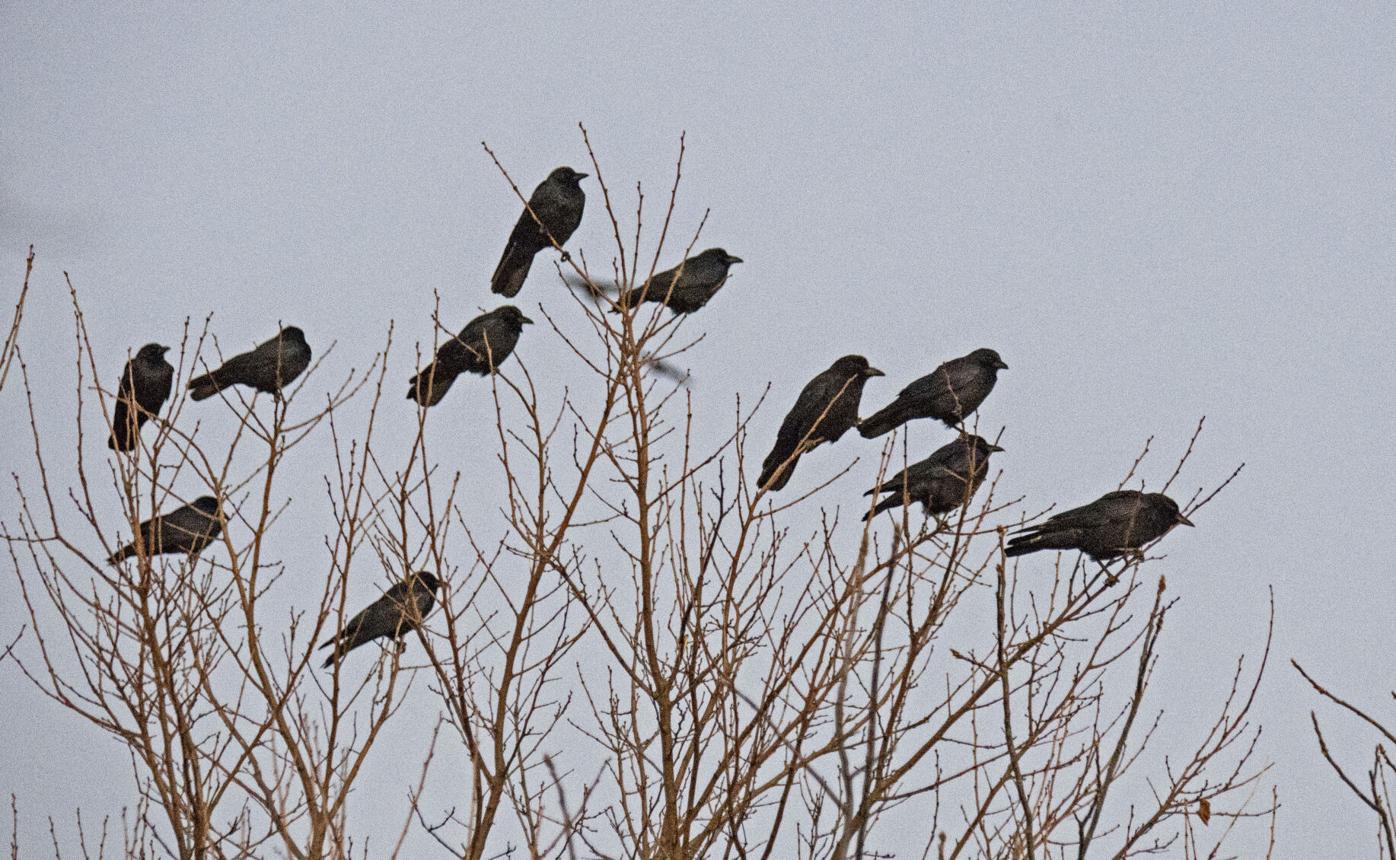 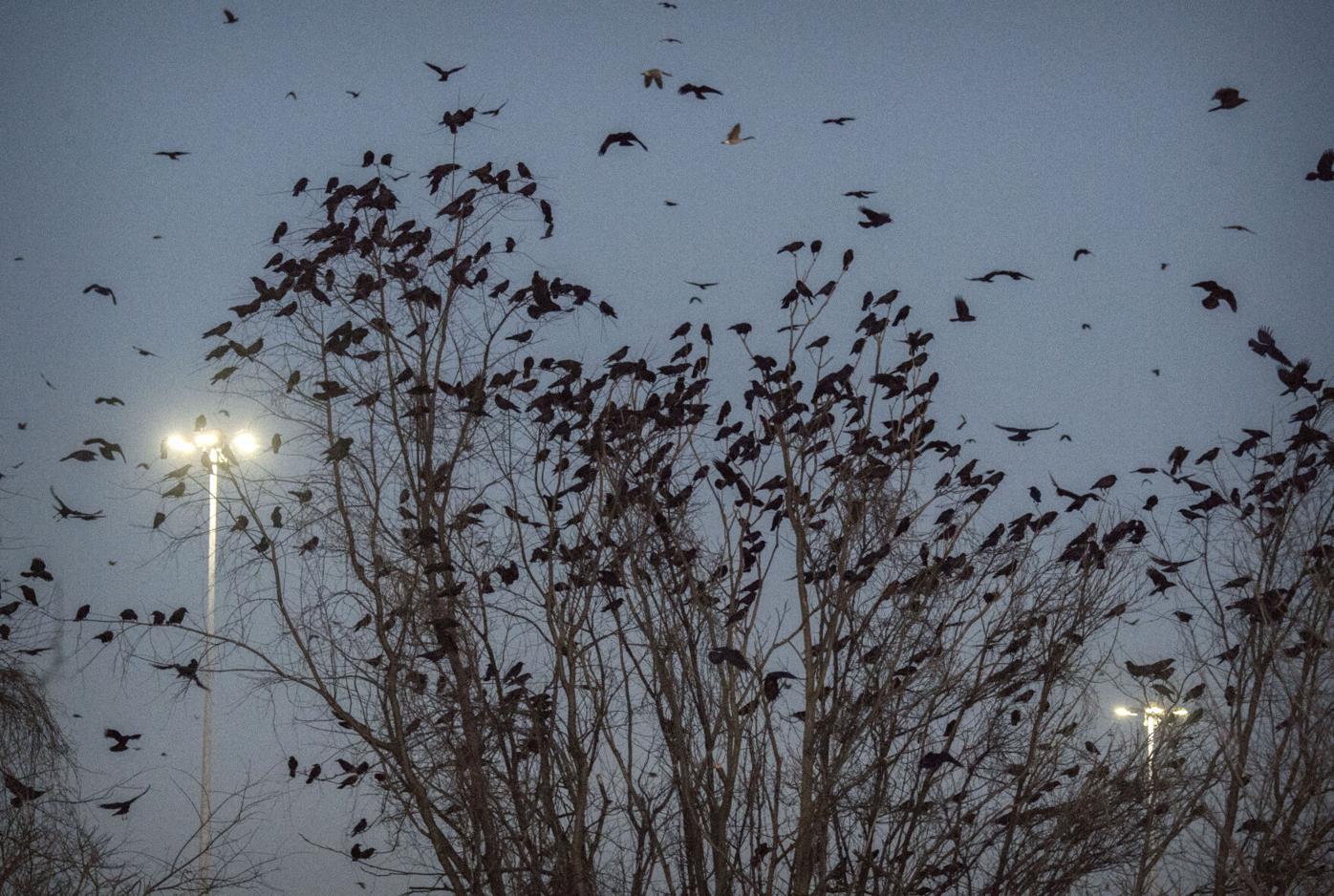 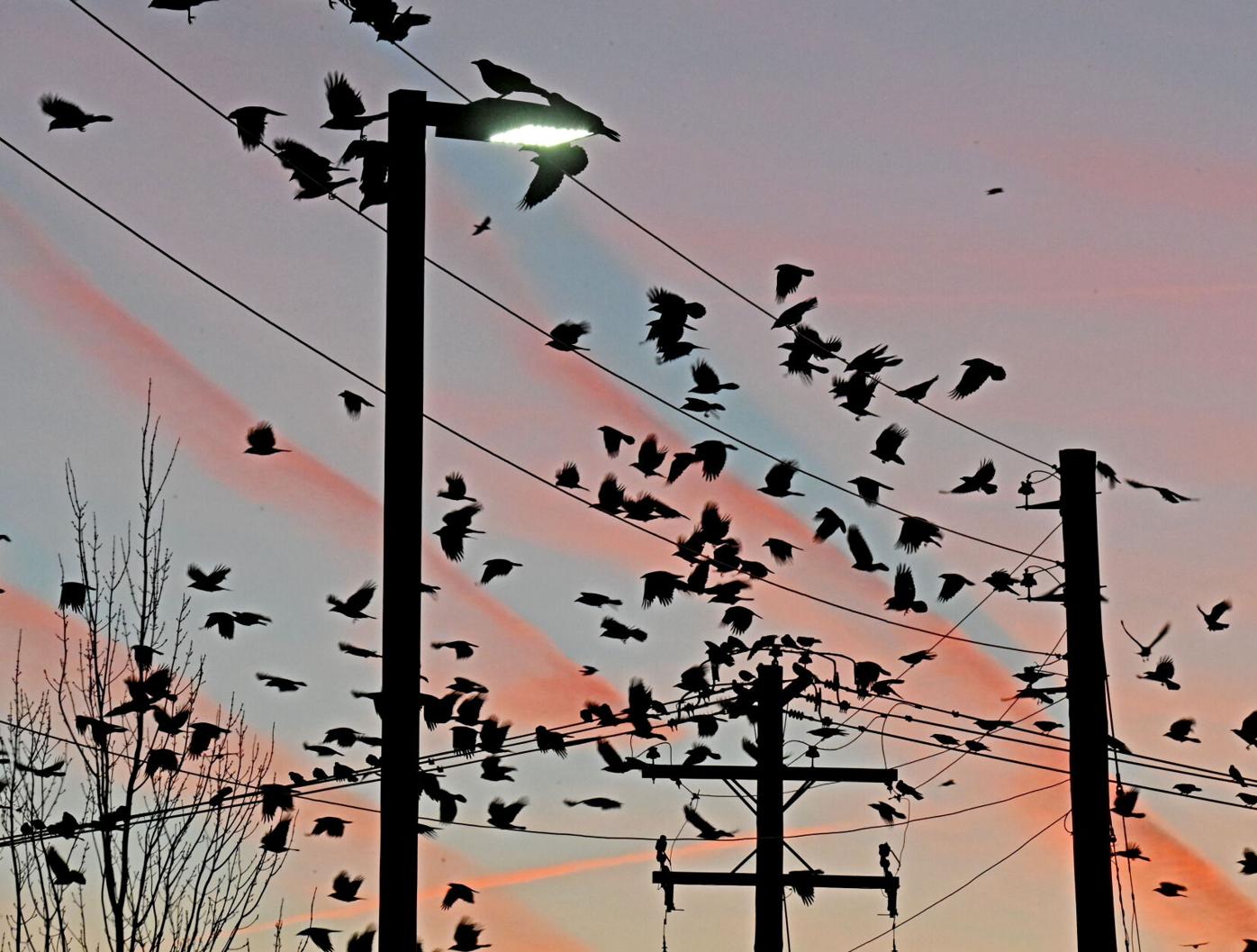 Crows fly from wires over the 2000 block of Fruitville Pike in Manheim Township Tuesday, Jan. 4, 2021.

Crows fly from wires over the 2000 block of Fruitville Pike in Manheim Township Tuesday, Jan. 4, 2021.

Bang! A sound, compared to an M-80 firecracker, echoes through neighborhoods near Route 30 and Manheim Pike.

“All. Night. Long. All hours. No stopping,” one nearby resident wrote in a December email, describing the noise she heard daily. “Please help!”

The sound, she said, was coming from propane-powered noise makers, often called crow cannons. The banging is meant to scare away thousands of crows wintering in the area — crows that have become a nuisance, defecating on cars in parking lots and damaging rooftops with their beaks.

But the cannons, being used mostly along a portion of the line separating Lancaster city and Manheim Township, have also become an intrusion to daily life, according to multiple residents, who wrote or called the Watchdog, beginning early last month.

The residents — pointing fingers at more than a half dozen local businesses — said they hoped to find out exactly who is responsible for the cannons and why they were being used overnight.

But despite numerous calls and emails from the Watchdog to each of those businesses, not a single message was returned. Owners and managers remained tight-lipped, likely because they know late-night cannon use isn’t too neighborly, the local residents guessed.

“It is completely unacceptable to have to be disrupted in one’s own home all night long,” a local man wrote, claiming he heard the banging every 3 to 10 minutes, beginning at about 4:30 p.m. and lasting until 7:30 a.m.

He’s even been in contact with police to solve the problem, which he said is “constantly interrupting our family’s sleep and general peace that they deserve.”

On Dec. 3, Manheim Township police Chief Tom Rudzinski confirmed that at least one complaint had been received and investigated. The night before, an officer responded to reported cannon use after 10 p.m., finding one of the noisemakers active behind a car dealership, which is actually within city boundaries.

“We shut off the propane so it would no longer fire,” Rudzinski said.

A few days later, when the Watchdog visited the area, a high-level dealership manager said he wouldn’t comment on the crows or cannons. White splats of bird droppings were clearly visible in the lot.

Lancaster city police have received at least one complaint about the cannons, too, according to Lt. Glenn Stoltzfus, the bureau’s spokesperson. An investigation even took place in the evening hours of Dec. 11 near businesses on Manheim Pike, he said. An officer couldn’t pinpoint where the sound was coming from.

“Our noise ordinance prohibits this type of activity without a variance, and even if a variance is given, if we receive complaints (for instance during a festival or event) we will still approach organizers and have them lower the volume,” he said in an email.

Stoltzfus pointed out that local municipalities have been dealing with crow-related issues for at least 15 years.

Stories in the LNP | LancasterOnline archive chronicle how leaders in multiple municipalities worked to combat crows in the early 2000s, even partnering with wildlife officials to poison them with tainted dog food.

Those plans ultimately led to the formation of the Lancaster Crow Coalition, a group of conservation-minded volunteers who opposed lethal mitigation efforts, according to founder Laurie Ulrich. Instead, they introduced and advocated harassment tactics — targeted use of crow cannons, pyrotechnics and even clanging pots and pans — to scare away roosting crows, many of which winter in the area from Canada, New England and Upstate New York, Ulrich said.

“Over the years, crows have done damage to our roof and rooftop equipment and we have had to undertake significant cleaning efforts,” she said. “Thankfully, we have seen very little activity from the birds this year, and we hope that … continues throughout the migration season.”

Though crow cannons have been deployed at Park City in the past, the noise makers have not been used there for several years, Gallagher said.

Just a short drive away, the Farm and Home Center on Arcadia Road has had to contend with much the same. Deanna Grager, the center’s facility and business director, described a particularly bad season just a few years ago.

“There was excrement all over our parking lots where ag technicians needed to access vehicles to visit local bio secure farms. Since crows can carry avian flu, we sought the help of the . . . Crow Coalition and have followed their advice for dealing with crow roosting,” she said.

Similar crow behavior has been observed and reported in urban and suburban communities across the United States, according to Aaron Haines, an associate professor of biology at Millersville University.

It’s part of the bird’s wintertime behavior, which locally begins about September or October, said Haines, whose focus is on wildlife and conservation.

By then, their breeding season is over, and they begin to gather in sometimes-massive groups.

“They are really a social bird,” Haines said.

To the crows, those groups have multiple benefits, including the ability to huddle together for warmth and to help one another find food, he said. That’s in addition to increased protection from predators like hawks, owls and raccoons, Haines said.

The crows’ protection strategy is one of the reasons they gather in suburban and urban communities like the area near Manheim Pike, he said. They are well lit and away from rural areas, where landowners might be more likely to take lethal action against them.

“These birds are smart. They are figuring it out,” Haines said.

In urbanized areas, there also are readily available food sources like trash containers, as well as the urban heat island effect — a term used to describe warmer temperatures in built-up areas, where pavement and buildings absorb and retain heat.

Crows have value in the local ecosystem, too, dispersing seeds while eating plants, controlling pests by consuming insects, and even mitigating disease by cleaning up roadkill, Haines said.

“They have wide diets,” he said, adding food-related litter to that list. “They clean up a lot of trash that we throw on the side of the road.”

Last week, Ulrich estimated that crows in Lancaster County number in the tens of thousands.

When they gather in their large roosting groups, they sometimes cause trouble, including roof damage by pulling at rubbery rooftop materials, she admitted. Roosting typically ends by springtime as temperatures warm and days get longer, experts said.

“It’s kind of like a big cocktail party that goes all night,” Ulrich said. “They get bored, and they’ll pick.”

It’s for those reasons that Ulrich said she understands the need to sometimes shoo the birds away, which is why her group introduced the harassment techniques.

Effective use of noise

However, noise making is most successful only in the 15 to 20 minutes that crows are arriving at their roosts in the late afternoon or early evening, said Ulrich, who has consulted with businesses and community leaders both locally and elsewhere in the United States. It’s overkill to leave cannons sounding overnight, she said.

“They shouldn’t be the problem that they are. The problem is that when people use them they use them at the wrong time and for too long,” Ulrich said. “But I think a lot of times it’s easier to just throw the switch on and go home.”

Ulrich estimated that cannons are used by as many as 10 businesses and organizations in the area, many of which have reached out to her for advice over the years. She also wasn’t surprised that owners and managers didn’t return the Watchdog’s calls and messages.

“They know it’s a pain in the neck,” she said about the noisy cannons.

Ulrich said recorded predator calls, dead crow effigies and artificial owl statues are ineffective despite others’ claims that they work. In fact, targeted, timely noise-making and harassment was the only tactic that Ulrich held up last week as an effective way to bedevil crows from existing roosts.

In many cases, rooftops can be saved by setting up chicken-wire grids that prevent crows’ beaks from reaching surfaces, she said. And when it comes to bird droppings, Ulrich suggests little more than a pressure washer.

“I will say that it is not a health hazard,” she said, contradicting Grager’s concerns about avian flu. “I mean, ‘Don’t lick your shoes.’ It’s good advice on any day.”

County residents bothered by after-hours crow cannon use should contact municipal officials to learn about local noise ordinances and whether blasting is a violation, she said.

If residents know the specific locations of businesses misusing crow cannons, they also can contact the coalition at lancastercrows@gmail.com, Ulrich said, explaining she may be able to contact and consult with owners.

A pair of eastern bluebirds flitted high in a tree early Sunday and perched near a nest, as …

It's always a great time to hike in Lancaster County, with the county's several dozen trails open to the public year-round.

Up the hill from Route 30 in Columbia is Laurel Hill Memorial Gardens, a historic cemetery with panoramic views of the Susquehanna River and i…

Paradise-Leaman Place Fire Company still exists and still responds to fire calls in Paradise Township, but no longer is “first due” in what tr…