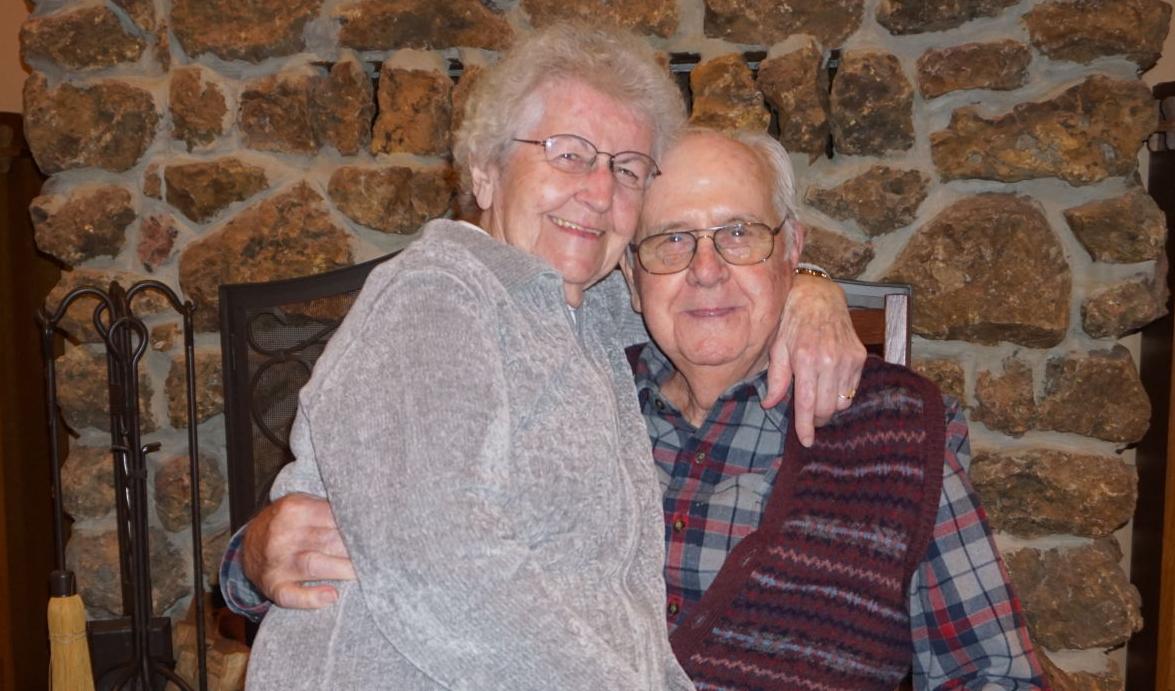 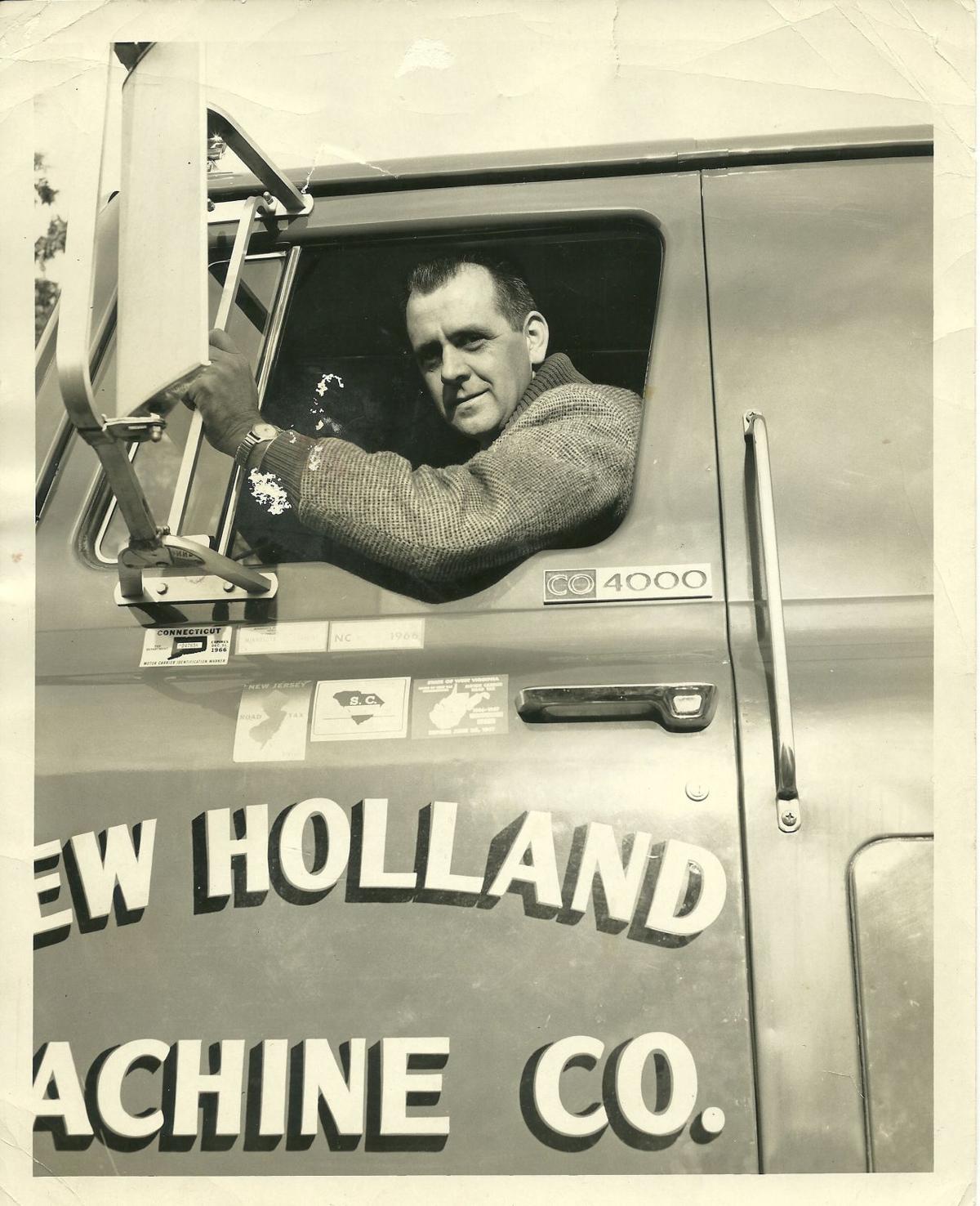 Sam Stoltzfus, in younger days, behind the wheel of a truck for the New Holland Machine Co. 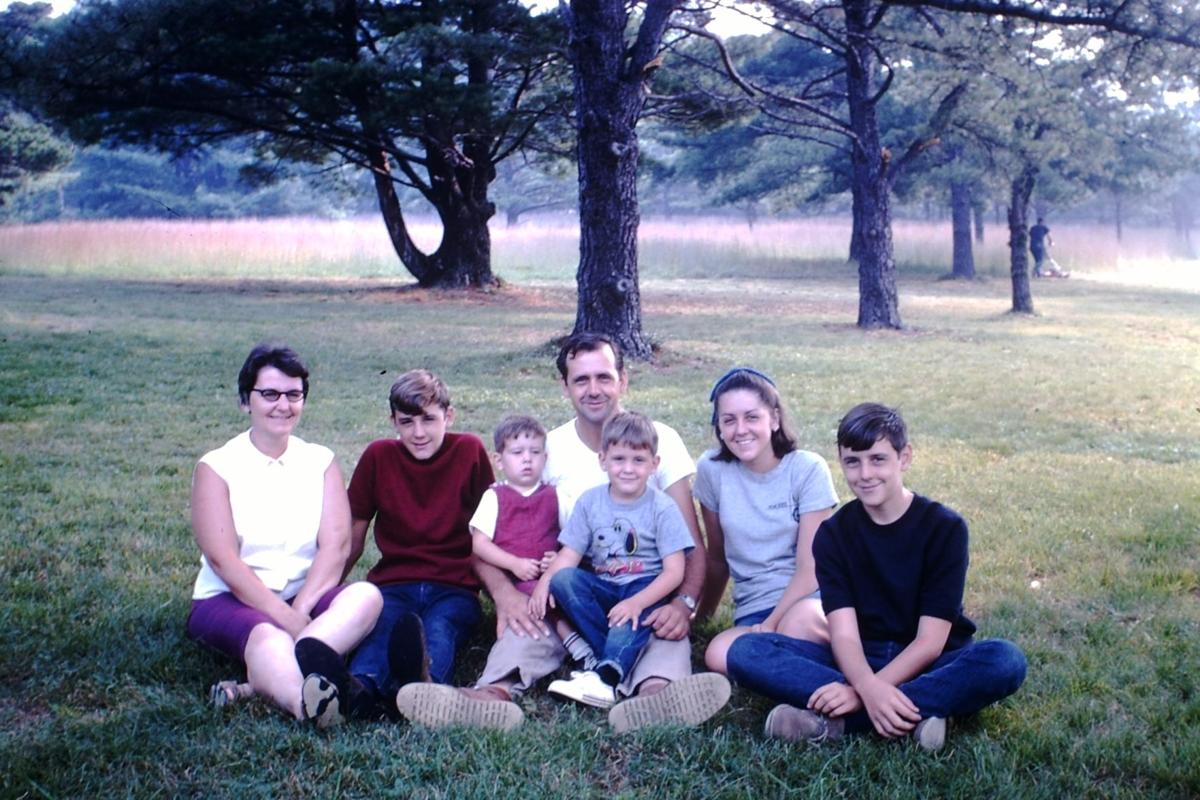 Mary Ellen and Sam Stoltzfus in 1969 with their children, from left, Bob, Jim, Ken, Shirley and Stan. 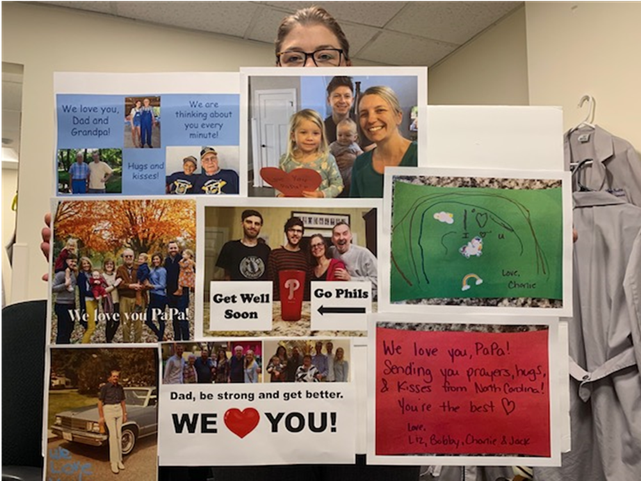 Kim Glatfelter, social work supervisor at Wellspan Ephrata Community Hospital, holds a display of well wishes that was propped in the room of Sam Stoltzfus before he died of COVID-19. 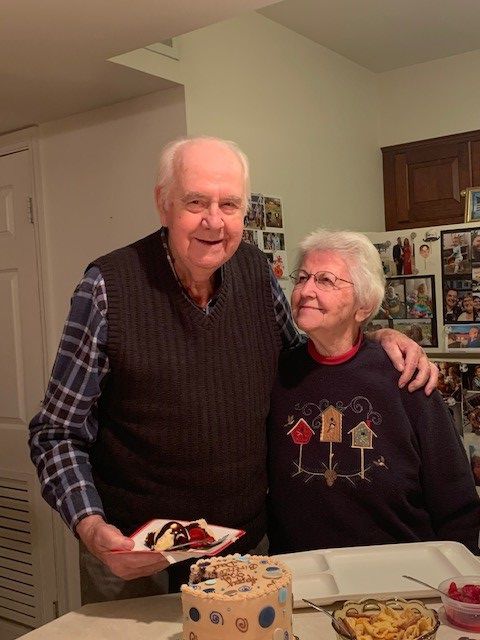 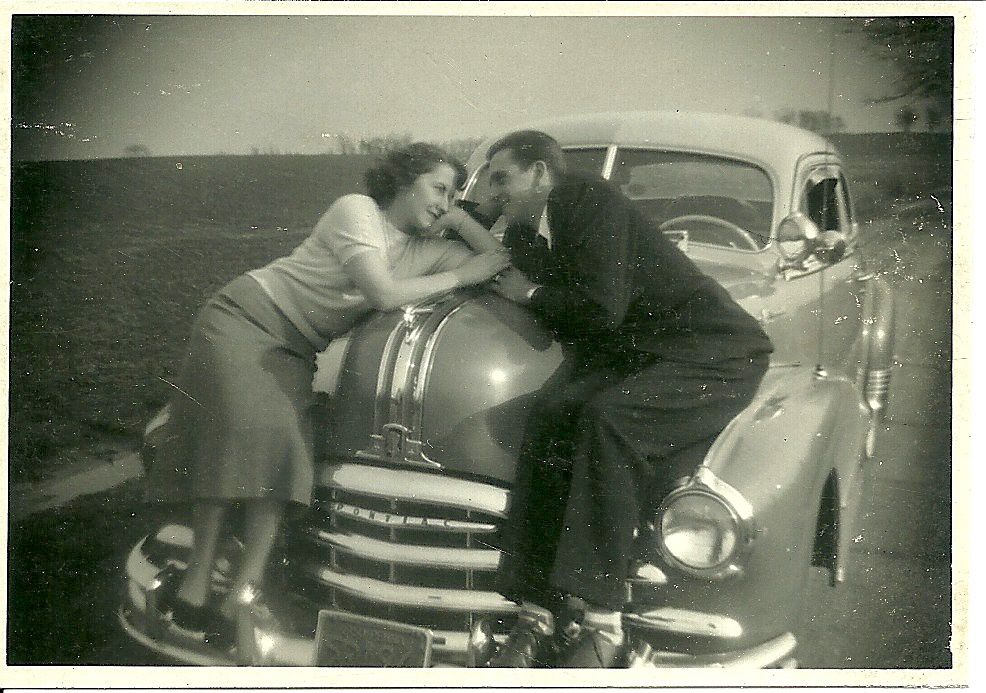 Mary Ellen and Sam Stoltzfus in their early years. Sam died of complications related to COVID-19 on April 1, 2020. 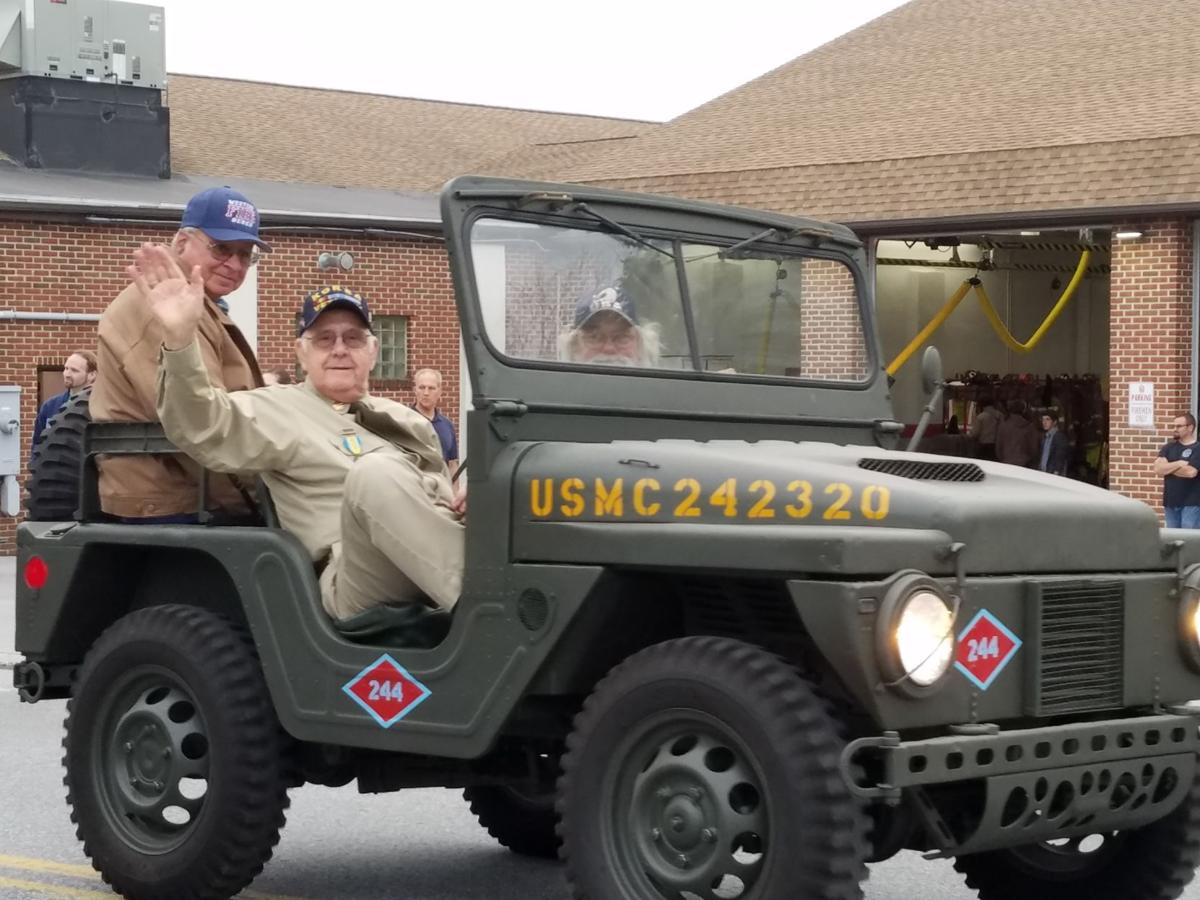 Sam Stoltzfus, a veteran of the Korean War, rides in a military jeep during a Memorial Day parade.

Sam Stoltzfus would take his seat at a restaurant, but wouldn’t settle for long.

Often wearing a Korean War veteran’s cap, he went from table to table confident of his knack to connect with anyone.

It could be a life-long buddy, a passing acquaintance, a stranger. It didn’t make a difference to Stoltzfus.

For some Lancaster County businesses, COVID-19 brings boom, not bust

“The more he could learn about you, the happier he was,” said Shirley Orfanella, one of Stoltzfus’ five children.

A Terre Hill resident most of his life, Stoltzfus went to a different restaurant each morning to see different pals. They called themselves the ROMEO Club, for Retired Old Men Eating Out.

Stoltzfus continued his routine into mid-March, doubting that the novel coronavirus raging in such far-flung places as Wuhan, China, and Lombardy, Italy, would find his little town.

10,000 Stoltzfuses and the house where they all began [The Scribbler]

Stoltzfus, 90, started feeling sick March 17, the day after going to Terre Hill Family Restaurant for what turned out to be his last breakfast out.

By March 20, Stoltzfus, a diabetic, was coughing and suffered a fainting spell. He could barely rouse himself from bed by March 25. He entered the hospital March 28.

Stoltzfus, a flag-waving, sports-loving, community-minded truck driver who was born into an Amish family only to wear an Army uniform, became one of the first in Lancaster County to succumb to COVID-19.

Stoltzfus’ wife, Mary Ellen, 90, also tested positive. While her husband of 68 years was in the hospital approaching death, she experienced extreme fatigue and recovered slowly by herself, quarantined in their apartment at Garden Spot Village.

“They had no idea (the virus) was in their surroundings,” their son, Stan Stoltzfus, said, “and it reinforces to everybody that they need to do their part to stop this.

“If we don't,” he said, “it will keep spreading and keep bringing heartache to families like us.”

Stoltzfus left the Amish community at the age of 18 with an eighth-grade education and a Ph.D. in hard work.

For 30 years he was a trucker, delivering farm equipment made in New Holland to dealerships across the Northeast and Midwest and yakking over a CB radio for many a lonely mile.

Stoltzfus perfected an auctioneer’s chant for his weekend side business running estate sales.

He ran with the Terre Hill Fire Company and sold subs and manned carnival booths for the Garden Spot Lions and Leo Clubs.

In retirement at Garden Spot Village, Stoltzfus found lots of people to talk to, either on campus or going out for breakfast.

“That’s the most painful thing,” Stoltzfus’ son, Jim, said. “We would have liked to have been able to surround him. His memorial service would have been incredibly well attended.”

In his final days at 141-bed WellSpan Ephrata Community Hospital, caregivers prioritized comfort. They stopped pricking his finger for a blood-sugar test. They kept music playing in his room. He stopped eating and drinking, and he struggled to breathe.

Nurses, garbed from head to toe, entered only when necessary to save on protective gear.

Stoltzfus, the extrovert, was allowed no visitors.

How to mitigate the isolation?

The family decided to fill his room with well wishes and memories. Orfanella emailed family photos, a great-grandchild’s drawing and messages such as, “We love you, PaPa!” to Kim Glatfelter, the hospital’s social work supervisor. Glatfelter printed the PDFs and taped them to a poster board to be propped in Stoltzfus’ room.

A Zoom video conference united Stoltzfus with most of his loved ones, including his wife, the day before he died.

His sheltering-in-place clan — about two dozen in all — logged on from homes in Lancaster County, Chester County, Philadelphia, New York State, North Carolina and South Carolina. A nurse turned on her device and held it for Stoltzfus to see.

“We had it all planned out,” Orfanella said. “As the oldest child, I was to go first. But none of us got to say the goodbyes we wanted to say. True to his personality and style, dad took charge of that call.”

Stoltzfus asked about the weather in the Carolinas. He wanted to know how the virus was impacting his sons’ work.

“He was more focused on others than himself,” Jim Stoltzfus said.

Stoltzfus labored to breathe, and he tired after about five minutes. The chat ended without everyone having a chance to talk. A short time later a nurse administered a first dose of morphine.

Orfanella, who was in South Carolina visiting her daughter and grandchildren, grieved not being at her father’s bedside.

“But the more I learned how the nurses were caring for him and how they had made his passing peaceful, I was able to let it go,” she said.

Jim Stoltzfus got a call that he was expecting from his father’s nurse the evening of March 31. She was at his father’s side with her video screen. Jim Stoltzfus logged onto Zoom, picked up a guitar, and began to sing a song he had written a couple of days earlier.

Jim Stoltzfus saw that his father could hear him, and he continued.

His lyrics touched on his father’s boyhood farmhouse “lit with soft gas lights,” of the “wife and baby waiting” for his return from Korea, and of “that big, old rig, and auctioneer on the side.”

As he sang, Jim Stoltzfus saw his father repeatedly close and reopen his eyes.

And he sang of how he wished he could be with him.

“The thought of you being by yourself,” he sang, “is what makes my heart grieve.”

He finished and wished his father goodnight. It was the last time a family member spoke to him.

About 6 p.m. the following day, a nurse checked on Stoltzfus. When she returned a half hour later, he was gone.

Editor's note: This article will be updated throughout the day with the latest information on COVID-19.

Easter may be disrupted by virus, but we celebrate still [column]

“Celebrating Easter is just not going to be the same this year” is a statement that as a pastor I’ve heard many times over the past few weeks.…

From Peeps to a mini Rockefeller Center: 7 weekend reads to catch up on today

Here's what you may have missed this weekend.

Gov. Tom Wolf will host a news conference about ongoing efforts to mitigate COVID-19 in Pennsylvania.

COVID-19 growth rate slowing in Lancaster County, but are cases being missed?

A slowing growth rate in confirmed COVID-19 cases in Lancaster County may be good news, but also could be misleading if people with symptoms a…

HARRISBURG - Doctors, nurses and other health care workers treating COVID-19 patients in Pennsylvania should be granted immunity from malpract…

Blessings of Hope running low on food due to COVID-19 outbreak, high demand

Since the beginning of April, Blessings of Hope, a food bank distribution center in Leola, has supplied food banks and organizations from Penn…

When Gov. Tom Wolf ordered the shutdown of nonessential businesses nearly six weeks ago, restaurant owners were forced to make a decision: piv…

Social distancing across Lancaster County appears to be slowing the spread of COVID-19, but a top medical leader here says not enough testing …

A Lancaster nurse and her first COVID-19 patient had fears. They overcame them together.

Cyra Uy, a nurse on an infectious disease unit, felt a bit of anxiety getting ready to care for a new patient.

Coronavirus deaths approach 400 in Lancaster County: Here are some of the lives we've lost to the pandemic

Dr. Ernest Wood was an obstetrician and gynecologist who delivered half of Lancaster, or so it seemed to family. When he dined at any restaura…

'Still in disbelief': A dad learns to raise 6-year-old girls after losing his wife to COVID-19