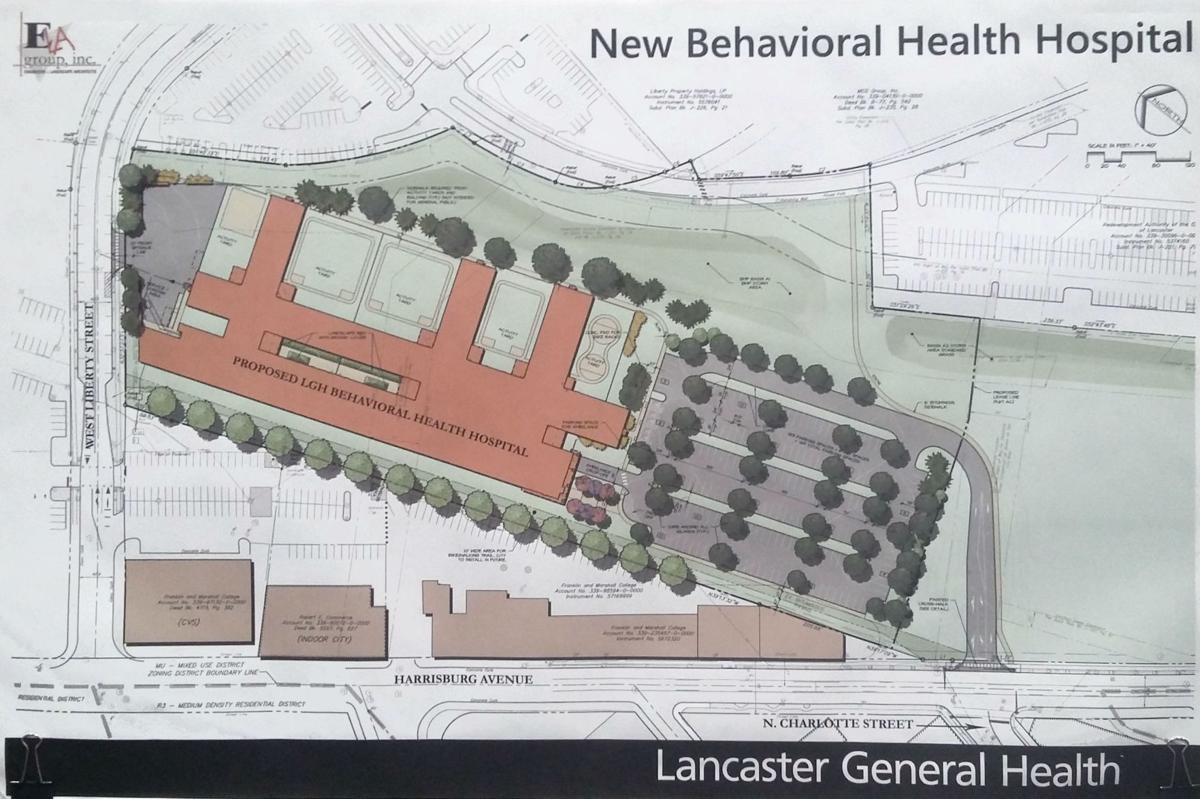 The latest site plan for the Lancaster General Health behavioral health hospital planned at 333 Harrisburg Ave., Lancaster. The West Liberty Street entrance is gone, as is a proposed access road that would have run along the building's south side; in its place, under the line of trees, is a right-of-way for a city bike path. 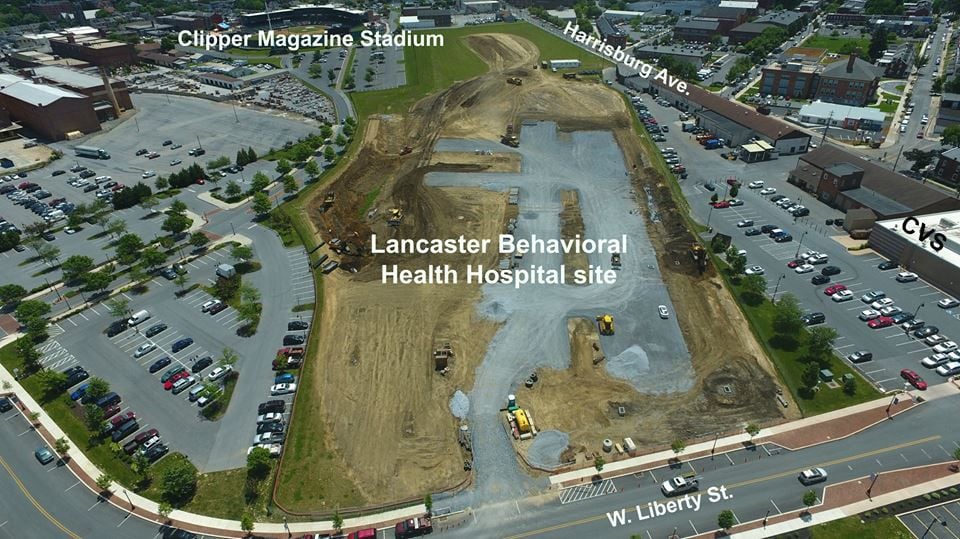 Lancaster General Health posted this aerial view of the site of its Lancaster Behavioral Health Hospital, which is under construction, on June 13, 2017.

The latest site plan for the Lancaster General Health behavioral health hospital planned at 333 Harrisburg Ave., Lancaster. The West Liberty Street entrance is gone, as is a proposed access road that would have run along the building's south side; in its place, under the line of trees, is a right-of-way for a city bike path.

Lancaster General Health posted this aerial view of the site of its Lancaster Behavioral Health Hospital, which is under construction, on June 13, 2017.

Big change is coming to psychiatric care in Lancaster County, and local providers have mixed opinions on it.

Lancaster Behavioral Health Hospital will greatly expand access to inpatient treatment here, which many agree has long been needed. But some are concerned about the impact on smaller providers here, and about the company that will manage the facility.

Its partner in the project is Universal Health Services, the nation’s largest chain of behavioral health hospitals.

The freestanding hospital near Clipper Magazine Stadium will replace the current 36-bed unit at Lancaster General Hospital, which officials said has to send patients elsewhere nearly 60 percent of the time because it’s full.

Lancaster General Health President and CEO Jan Bergen called the new hospital a “critical community resource” that will add services people currently have to travel for.

“There is no one in Lancaster County providing inpatient services to children,” she said, noting that last year more than 550 local children were sent to psychiatric hospitals outside the county or state.

The new hospital will add a children’s unit and a med-psych unit for psychiatric patients with serious medical issues. There are currently no med-psych units in the county, but WellSpan Ephrata Community Hospital will begin accepting med-psych patients this summer when it completes an expansion of its inpatient behavioral health unit.

“My son sat in a hospital for two weeks because no mental health facility could give him the cardiac care that he needed,” said East Hempfield Township resident Jerri Anne Johnson, 62. “This is so huge.”

There will also be inpatient units specifically for older adults, women who have experienced trauma, and patients with psychiatric illness and substance abuse disorders, as well as outpatient and day-treatment programs.

Lancaster General also reached an agreement with the county several months ago to accept inmates from Lancaster County Prison.

But some local organizations that provide outpatient behavioral health and drug and alcohol services here said Lancaster General met with them relatively late in the planning process and, despite talk of collaboration, failed to materially ease fears that the new partnership will draw patients and talent away from them.

But, she wrote, she had hoped Lancaster General would refer patients who need outpatient services to local providers that have been offering them here for decades, instead of duplicating them.

As LNP previously reported, the federal Justice Department is investigating UHS for alleged billing fraud, and government inspectors have cited several dozen of its facilities across the nation for “dangerously poor or unsafe conditions” in recent years.

Universal Health has characterized reports raising questions about its facilities as inaccurate, and said it scores high on patient satisfaction and evaluations by independent accreditors.

“That’s our commitment, and that is what we will deliver,” she said.

“UHS has been very transparent,” she said, noting that Lancaster General is the first 50-50 partnership in UHS history. “That includes giving us visibility and line of sight on any aspect of operations, whether it be quality or financial or whatever.”

Youcis also said UHS gave Lancaster General a commitment to do everything it can to recruit from outside the community.

The hospital is expected to open in June 2018.

This story was updated at 12:33 p.m. May 9 to correct information about the availability of med-psych units in Lancaster County.

After a long search for a psychiatrist, CHI St. Joseph Children’s Health announced this week that its new behavioral health center for childre…

United Auxiliaries to Lancaster General Hospital has selected a proposed child life program as its next focus.

CEO named for Lancaster Behavioral Health Hospital, which is to open in summer 2018

Lancaster Behavioral Health Hospital isn't expected to open until summer 2018, but as of this week, it has a leader.

Lancaster Behavioral Health Hospital is still under construction, but has progressed far enough for leaders to start making plans.

How many detox beds Lancaster County has, and why there's a push to create more

Lancaster County could use more drug and alcohol detox beds, but adding them won’t be easy, according to county Drug & Alcohol Commission …

Herschel Walker, who won football's Heisman Trophy in 1982, had a career in the NFL and then became a mental health advocate, will speak at 11 a.m.

Lancaster Behavioral Health Hospital was cited for two incidents this spring after investigations prompted by complaints, according to the Pen…