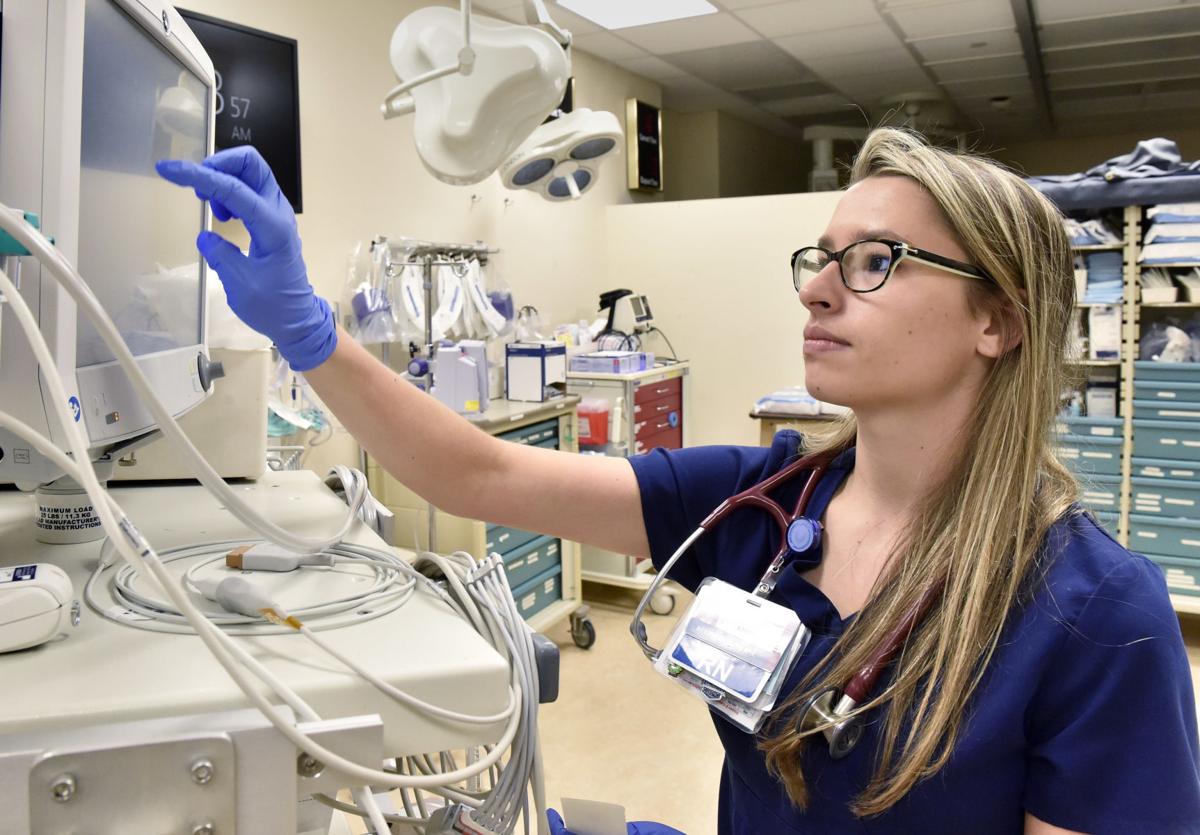 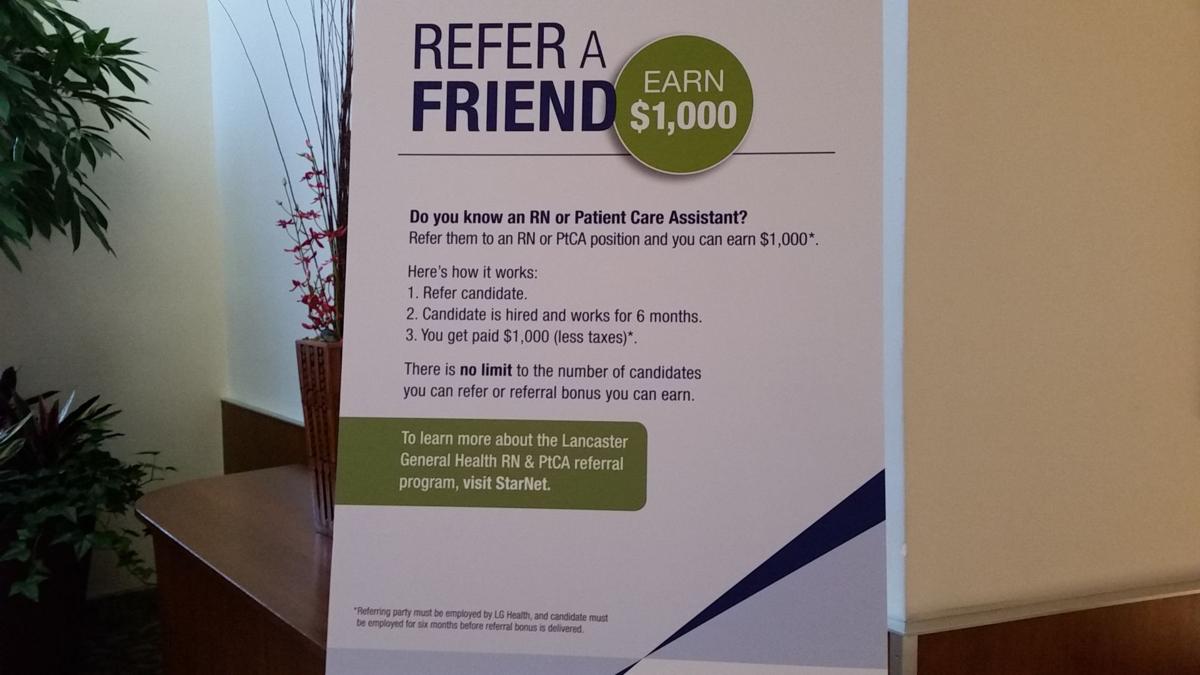 This offer was prominently displayed in the lobby of Lancaster General Hospital in February 2018. 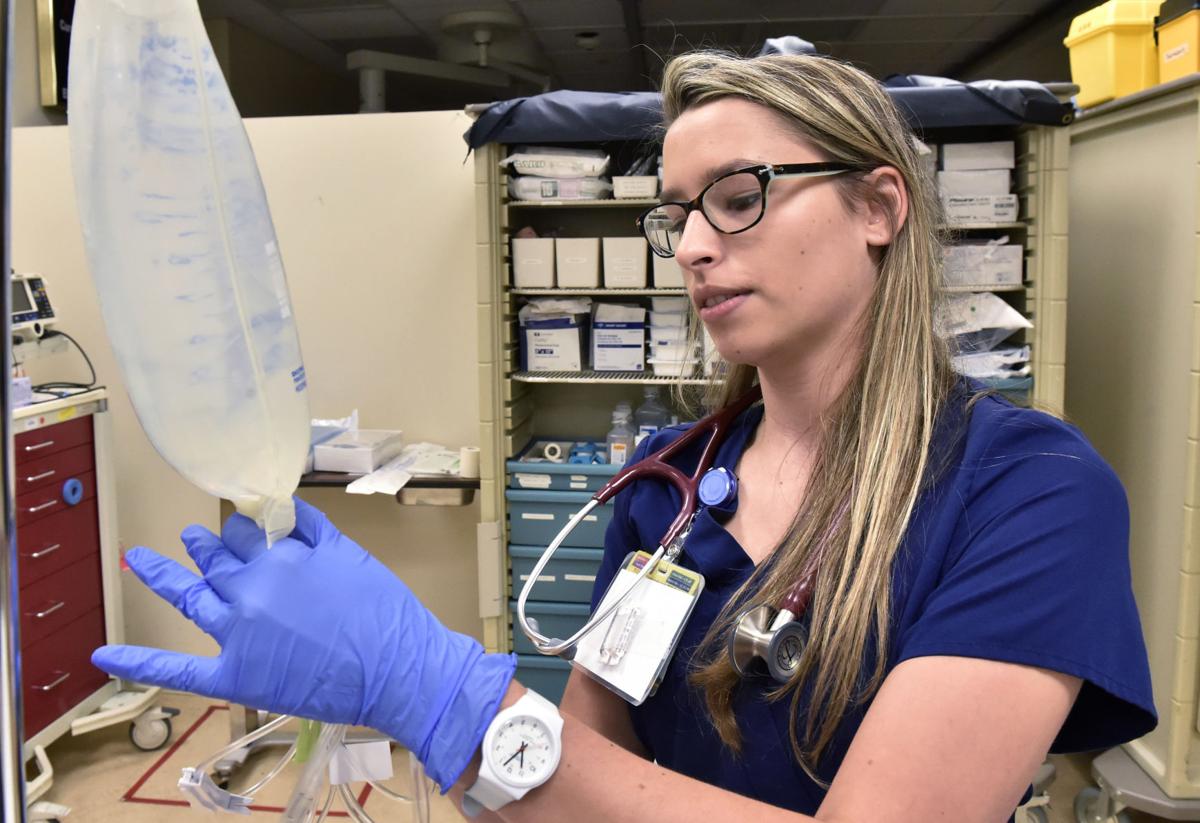 This offer was prominently displayed in the lobby of Lancaster General Hospital in February 2018.

This is a good time to be a nurse looking for a job.

Some Lancaster County hospitals are offering signing bonuses of up to $10,000 as they seek to fill positions in what is a tight market nationwide.

Lancaster County hospitals say the shortage hasn’t affected patient care, but they’re making a greater effort to attract nurses than in times past.

The shortage isn’t unprecedented: In 2001, demand was so high that Lancaster General Hospital recruited 69 nurses from the Philippines.

More nurses is better, but Pennsylvania has fewer

But it is a big change from the Great Recession starting in late 2007, when hospitals had many applicants and few jobs.

Back then, nursing leaders said the economy was causing people to delay elective medical procedures, and prompting nurses to put off retirement or seek more hours to boost their income.

Now they’re attributing the shortage to the good economy and the massive wave of Baby Boomers, saying a lot of older nurses are retiring at the same time as their generation ages and requires more medical care.

Kris O’Shea, who is chief nursing executive and a vice president at WellSpan, said that in nearly four decades of being a nurse she has seen “a cyclic countereconomy” pattern, and this latest swing was pronounced.

During the Recession, she said, there were nurses for whom WellSpan had sponsored education but then couldn’t provide with jobs.

“It was almost embarrassing to talk to nursing students because they would be begging me for jobs,” she said of that time.

By contrast, she estimated that WellSpan has hired more than 200 nurses across its health system in the past year.

Several young nurses LNP talked to confirmed that they and their classmates have lots of options on the job front, many with significant financial incentives.

“I haven’t heard of people who had a difficult job finding places to work,” said Jessie Robinson, 26, of Lancaster.

Robinson, who has been a registered nurse for five years and currently works for a home health company, said she’s seen sign-on bonuses of up to $15,000 being offered in other states.

The U.S. Bureau of Labor Statistics ranks RN third on its list of occupations projected to add the most jobs, estimating it will grow 15 percent from 2016 to 2026, creating 438,100 new jobs nationally.

Moody’s Investors Service this month issued a report describing “an extreme nursing shortage” that it estimates will hurt nonprofit hospital margins for the next three to four years.

That report quoted the Bureau of Labor Statistics as predicting the nursing imbalance will persist until 2025, and estimated that it will be felt most heavily in Southern and Western states and in rural hospitals, “since large urban hospitals benefit from advantages such as their proximity to nursing schools, the ability to pay competitive wages and greater job opportunities for spouses.”

The latest National Nursing Workforce Survey of more than 78,700 nurses found that half of RNs were age 50 or older.

At last report, the bureau said there were nearly 139,500 RNs in Pennsylvania, with 4,320 in the Lancaster area.

Projections from the Pennsylvania Department of Labor & Industry show registered nurse employment growing by 2.8 percent statewide through 2019. Estimates show 9,312 positions to be filled annually, about a fifth because of growth and the rest due to exits and transfers.

For Lancaster County, the agency estimates 19.5 percent growth in RN jobs between 2014 and 2024, with 146 openings annually. Numbers for licensed practical nurses are similar.

“Hospitals across the U.S. are being creative with how they market and get folks to relocate to their particular areas,” said Kim Brister, WellSpan Health director of talent acquisition.

At WellSpan, she said, that includes everything from ramping up its loan forgiveness, education assistance and nurse externship programs, to offering relocation assistance, signing bonuses of up to $10,000 and paid time off “bridging” for experienced nurses.

WellSpan is also emphasizing the clinical support and development programs it offers nurses, she said.

In the lobby of Lancaster General Hospital, a prominent display offers employees $1,000 if someone they refer is hired as an RN or patient care assistant and stays at least six months.

Lancaster General Health chief nursing officer Lanyce Roldan confirmed that offer in an email and said the system is also offering supplemental-staff RN’s a sign-on bonus of up to $10,000.

The system has seen demand for nurses increase as it grows, she wrote, noting that about half of its nurses are hired from Lancaster General subsidiary Pennsylvania College of Health Sciences.

Kelly McCall is spokeswoman for UPMC Pinnacle, including its hospitals in Lancaster and Lititz.

She said in an email that the system offers a $5,000 sign-on bonus to RNs who have “three or more consecutive years of experience in the specialty unit for which they are hired.”

LNP previously reported that UPMC Pinnacle implemented a new wage scale for nurses at its Lancaster County hospitals after acquiring them last year, and said that created significant raises in many cases.

UPMC Pinnacle also described a variety of initiatives related to professional development and creating a positive work environment, which McCall said “are making a long-term difference in providing an environment that attracts and retains high quality nursing staff.”

WellSpan said it brought some in for its big transition to the Epic electronic medical record system in mid-2017 and is phasing them out as the progress on that ongoing project continues.

And McCall said “a few” travel and agency RNs have been working at its new hospitals “as a transitional step as we are actively hiring permanent staff.”

Titus Leitoro, director of operations at Urgent Medical Staffing Solutions LLC in Lancaster, confirmed in an email that it is feeling the shortage.

“We have a huge order for permanent RN’s placement that we have not been able to fill,” he wrote, saying, “Where did all the nurses go?” is “a question I hear from our recruiters on a daily basis.”

“Over the past year we have seen the demand for travel nurses increase across all specialties,” she said, noting that she didn’t have local numbers.

The shortage isn’t limited to RNs and hospitals.

Willow Valley Communities, for instance, has been advertising sign-on bonuses of $5,000 for full-time RNs working second and third shift in skilled care.

Russ McDaid, president of the Pennsylvania Health Care Association that represents more than 500 senior providers, said he’s hearing of “greater demand than ever for nurses” on both the RN and licensed practical nurse level — particularly in Lancaster County, which has a lot of nursing homes and retirement communities as well as a hospital market with big new players.

The situation is a concern as a pure supply issue, he said: Providers are “not sure that they could find the qualified, dedicated folks they need on the street right now.”

But on another level, McDaid said, homes have been struggling for years now because so many residents are covered only by Medicaid and the state pays much less than it costs to care for them — and that was a problem even before this shortage started putting pressure on wages.

Lancaster General Health/Penn Medicine, UPMC Pinnacle and WellSpan Health don’t have unions. However, Tower Health in Reading has unionized workforce at three of its hospitals.

Lancaster County has 32 nursing homes, which are inspected by the Pennsylvania Department of Health. The following is a list of all nursing ho…

As nursing has changed over the years, the one constant has been the importance of human connections.

A Berks County site has been selected for Drexel University College of Medicine at Tower Health, which will be the second medical school locat…

Pennsylvania's oversight of nursing homes will get another look

About 100 members of the nonprofit Nurses of Pennsylvania gathered in Penn Square on Wednesday to advocate for safe staffing legislation.

Because he doesn’t have a bachelor’s degree in nursing, Dec. 31 was Tim Watts’ last day in the operating room at Penn Medicine Lancaster Gener…