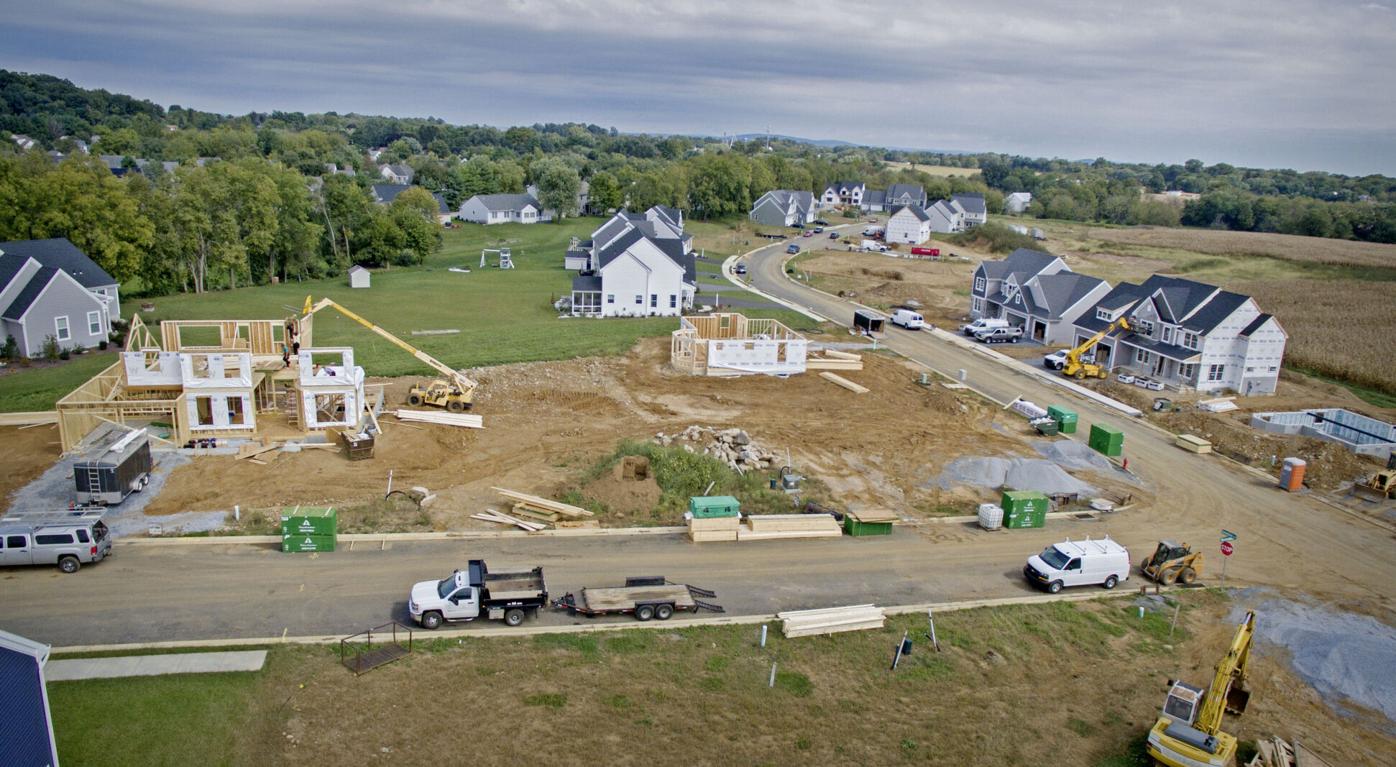 Homes are under construction while families are living in completed units at the new Settlements East development in Manheim Township Tuesday, Sept. 28, 2021. The 2020 census numbers indicate municipalities like Manheim Township have allowed single-family detached homes to dominate the housing development landscape. About 1,000 acres of land designated for development has been built on each year since 2015, according to county planners.

A recent analysis from the Lancaster County planning department suggests new homes are being built on the right land for development, but they're also gobbling up too much of it too fast.

County planning officials used 2020 census population and housing data to calculate the average amount of land homes take up in Lancaster County, according to Scott Standish, the department’s executive director.

The analysis showed the density levels of new developments between 2015 and 2019 remain stubbornly low, about 4.6 homes per acre. The county set a 7.5 homes-per-acre goal in 2018.

If municipalities continue to rely so heavily on detached single-family homes to accommodate their population growth, the county could blow past its land preservation goals and end up with more expensive and inefficient taxpayer-funded infrastructure and utilities, Standish said.

Second, the county needs to do more to convince local municipalities - which control development regulations - to make it easier for developers to build denser housing in their community. Current zoning rules don’t allow them in many parts of the county.

Encouraging development in certain areas of the county, and boosting the density of that development, are longstanding goals developed through public input, Standish said.

Yet many denser developments face lots of public opposition on the local level, municipal officials said.

“Most of the opposition to smart growth isn’t on environmental grounds, it really comes down to the demographics of it,” said Josh Druce, president of the Lancaster-based Coalition for Smart Growth. The group advocates for more sustainable development. “In the wealthy suburbs, people would still like to keep, not (just) even poor people, out of the community, but also a fair amount of middle-class” people, Druce said.

“If we continue to develop at the density that we’re seeing, unfortunately, we’re going to use up land much more quickly within the boundaries" of land designated for development, Standish said. “And then we're going to be at the point where we have to decide, ‘OK, now what do we do?’”

Building up vs. out

The county’s analysis used 2020 census data to help determine where new housing has come online in the last 10 years, according to Standish.

It found, Standish said, that about 85% of new homes built in the 2010s were built in areas municipal officials have already designated for development – land that’s already close to roads and utilities, not somewhere hard to deliver services to. That’s seen as good news.

However, the county’s housing density levels have barely budged over the last 20 or so years, according to figures shared by Standish. It’s also significantly less than the county’s target of 6.5 homes per acre in its 2006 planning goals and the 7.5 homes-per-acre goal set in 2018.

Real estate professionals and municipal officials said while there were some new denser developments built in the last few years, most have been detached single-family homes built on larger lots.

The 2020 census also shows the county’s growth in population and homes has not been broadly shared. Suburban townships neighboring Lancaster city continue to add the most people: Manheim Township grew by 5,844 people in the 2010s and added 1,435 new homes. East Hempfield Township gained 2,782 people and 1,200 homes in the same period, according to the census.

More rural townships and boroughs with little vacant land saw little growth or even contracted, according to the census. Denver, Columbia, Millersville and Caernarvon Township all lost 2% or 3% of their population in the 2010s.

And yet municipal officials in both the fast-growing suburbs and stagnant boroughs are working with similar limitations when it comes to increasing density.

In Denver, Mayor Rodney Redcay said some residents have left the borough to live in more rural areas, and part of the difficulty of attracting new ones is a lack of housing choices.

“The borough of Denver is built out,” Redcay said. “There is very little space left that a developer could build on.”

The only way to expand is to build up rather than build out. But Denver’s zoning rules don’t allow housing that’s more than 35 feet tall, roughly three stories.

“To build up would be great,” but many Denver residents wouldn’t support it, he said.

“Residents that are here like what they have and have that history,” Redcay said.

But it’s unclear how much more economic activity Denver can draw without more people.

Businesses are attracted to the borough because of its easy access to the Pennsylvania Turnpike and Route 222, but a lack of robust labor force also shies them away, Redcay said.

“How do you work at developing your residential area to support that type of labor force? I don’t have the answer,” Redcay said.

Some private developers are investing in Columbia, said the borough’s mayor, Leo Lutz. They’re repurposing some former industrial buildings to add new higher-end rental units in the borough, catering to young adults and empty nesters who are able to afford rents that are more than $1,000 a month.

But that’s not enough to relieve the demand for housing, Lutz said. As a result, older and wealthier buyers are pricing young families out of the market in Columbia, he said.

Columbia’s density levels already meet the county’s goals, the mayor said, but the only way to solve its housing crunch is to build up.

The borough’s residents, though, have pushed back on taller developments because they could block their views of the nearby Susquehanna River. Still, “we need to create beautiful market-rate housing for empty nesters to make their (previous) homes available to young families, that’s the key to our population going back up,” Lutz said.

The lack of options beside single-family homes has also been a problem for older adults, said Melissa Ressler, executive director at Lancaster Downtowners, a mutual aid group for older adults living in Lancaster city.

There’s the reliance on driving for one, she said, but also “often you’re not as connected to your neighbors. There aren’t those sort-of loose connections and casual check-ins and things like that,” Ressler said.

Increasingly, she said, older adults are moving to walkable areas like Lancaster city to maintain an independent lifestyle later in life.

Willow Valley Communities’ $90-million proposal would cater to residents age 55 and older and the development could be complete by as soon as 2025.

Though that project would likely be financially out of reach for many residents, Tom Weik, realtor and manager at Lancaster-based Kingsway Realty, said the current lack of options has created a bottleneck in the real estate market.

When older families can’t find a suitable place to live, they end up staying in their current home longer, Weik said. Down the chain, first-time homebuyers struggling to find affordable homes to purchase end up clogging the rental market.

“The couple of buyers I'm working with that own homes, I could've sold their homes several times over, but they haven't been able to compete successfully with homes that they've made offers on,” Weik said.

For families that can afford to buy a house for $300,000 or more, new single-family subdivisions are an option. The growth of new homes in East Hempfield Township has allowed the municipality to avoid property tax-rate increases for 12 years, said the township’s manager, Cindy Schweitzer.

“Now, if you talk to a resident, they will complain we have traffic issues,” Schweitzer said.

The county’s case, along with urban planners around the world, that increased housing density would be able to support a more comprehensive public transportation system, and therefore relieve congestion, has not convinced most East Hempfield Township residents, Schweitzer said.

“I think our residents equate density to traffic problems, and that’s a very difficult thing to overcome,” the manager said.

The township is also pursuing recreational trails to give residents more options to be outside, Schweitzer said. But “in terms of getting cars off the road, that’s tough – that's really, really tough,” she said.

Available, developable land is dwindling in the township, Schweitzer said. The township’s supervisors don’t want more development to encroach on farmland north of Route 283. But she said she expects residential sprawl to continue west into West Hempfield Township.

“Especially on the southern side where we border the city, a lot of land is looked at for higher-density apartment-type development,” Drumm said. “As the city looks at that, we’re jointly looking at that with them. We’ve been in discussions about planning about how we can sort of plan that area together.”

Manheim Township became a symbol of heated development fights, most notably the Oregon Village project. Residents in 2019 fought the plan, arguing that it would destroy precious farmland and cause traffic issues.

But that was a misleading claim, Druce said.

“More than half the site is a long-vacant abandoned resort, not farmland,” Druce said. The rest of the land included existing retail and a piece of agricultural land that was previously a corn maze.

Another development project in the township that also sought approval in recent years was Settlements East, Druce said. It saw little or no objection from residents and got municipal approval rather easily, even as its plans included building on previously productive farmland, Druce said.

As the father of two multiracial children, Adam Hosey believes in having open and transparen…

In the upcoming Manheim Twp. commissioners race, development is still the No. 1 issue

Lancaster County census data is finally here; What it shows and what it means

The U.S. Census Bureau released 2020 census data for Lancaster County on Thursday. The data shows growth within the county, particularly in su…

Is Lancaster County a metropolitan or rural region? Here's what census figures say about the county, its population

Despite all the rolling green hills, silos and farm stands, the latest U.S. census figures r…

Manheim Township will be fully built out by 2036; voters to choose who will manage the remaining developable land

A wall inside the meeting room at Manheim Township’s municipal building features a framed map labeled:

These 6 Lancaster County projects could get federal infrastructure money

Don and Becky Murphy have long been believers in Columbia, amassing a portfolio of properties in town with Don telling LNP | LancasterOnline a…