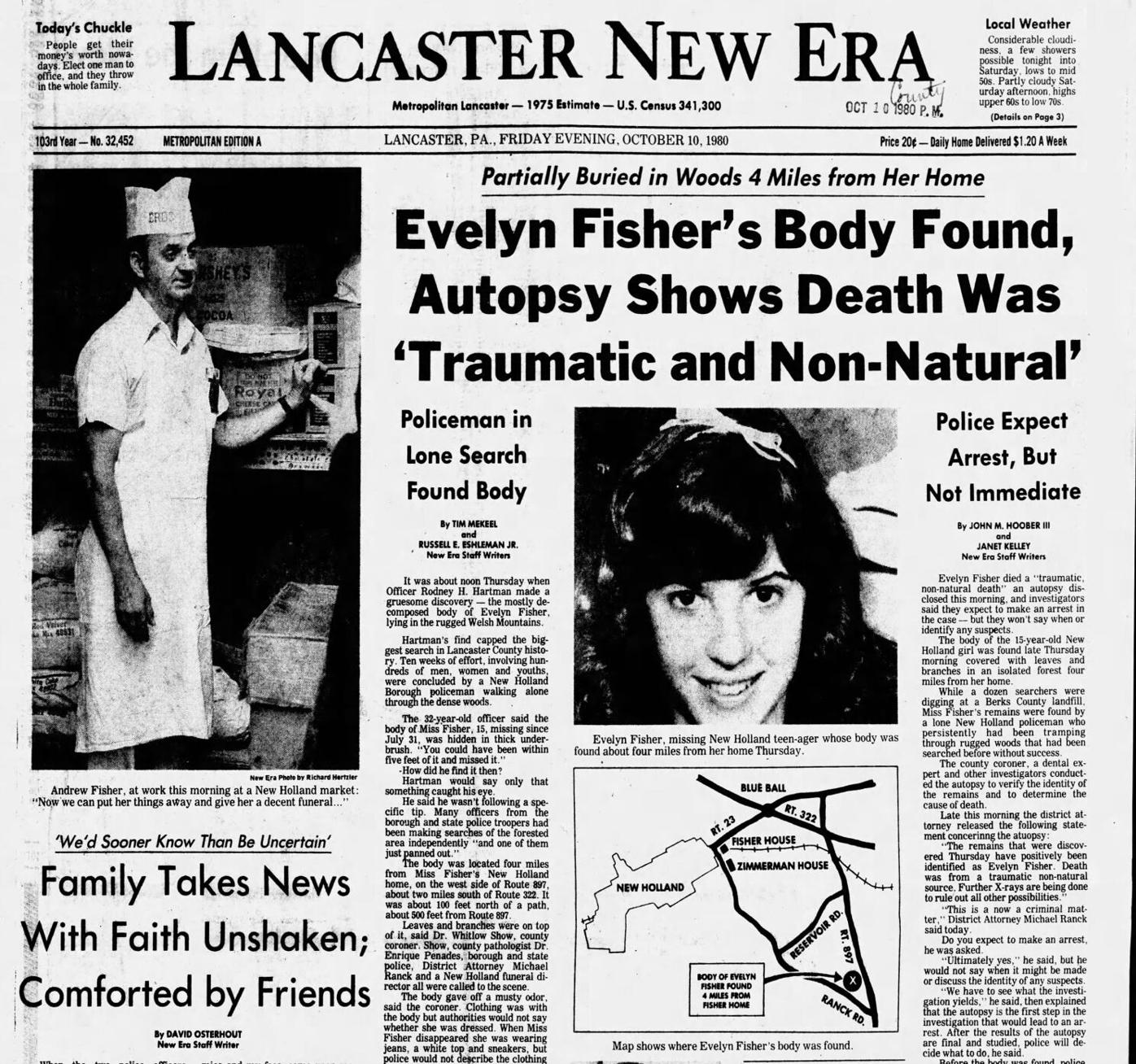 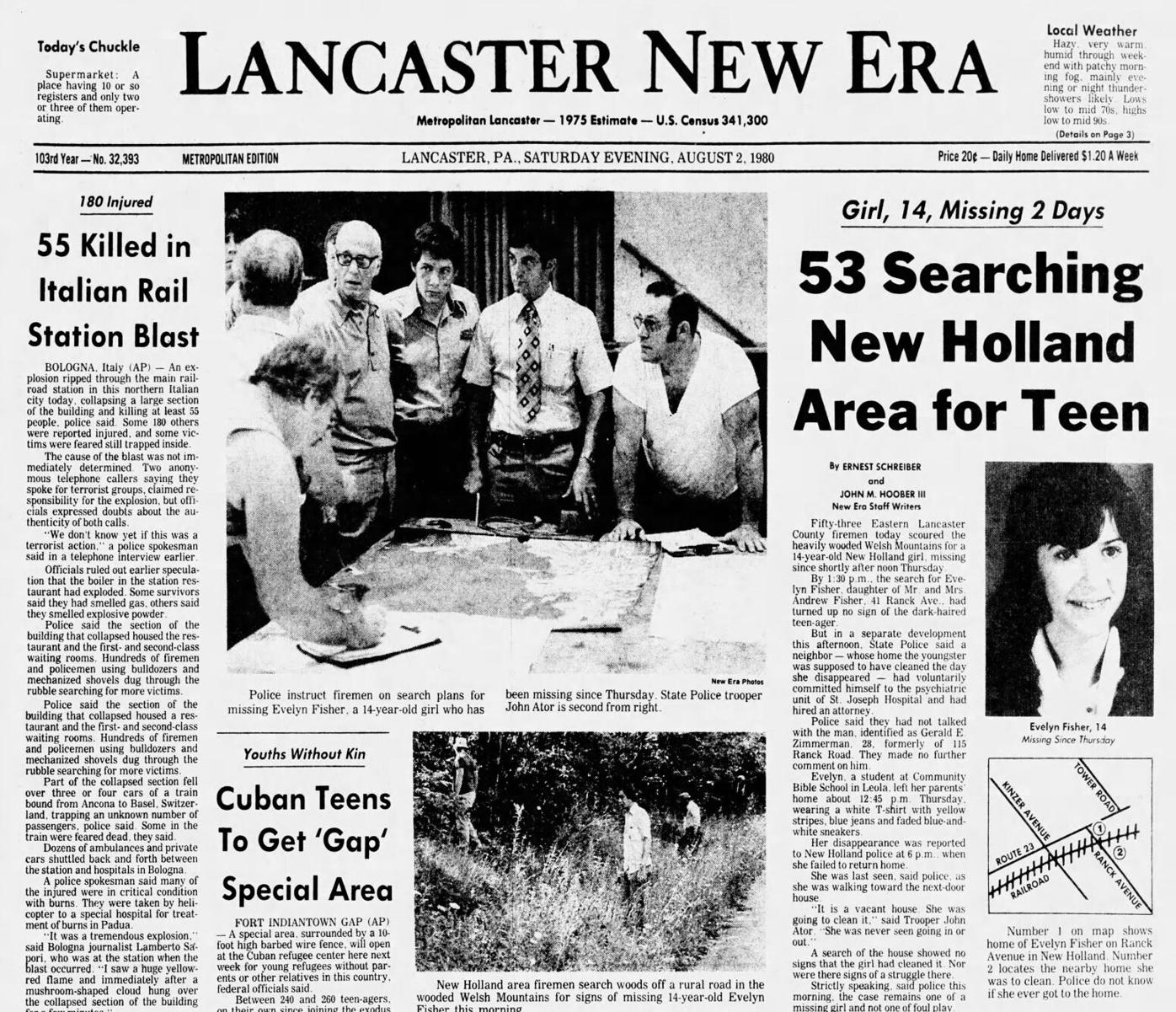 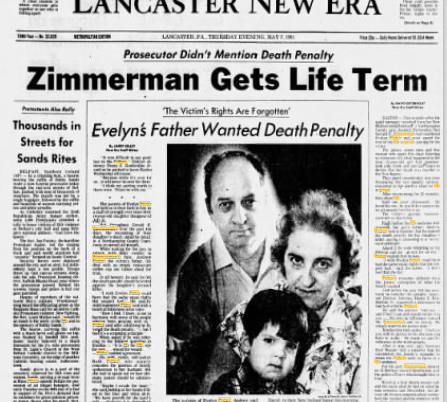 But after several people suggested she should, she decided to do so a couple weeks after the 18-year-old disappeared while walking home from church on June 21 in Upper Leacock Township.

If anyone could possibly understand what the Stoltzfoos family was going through, Fisher would.

Ten weeks later, a police officer found her body in the Welsh Mountains, in a heavily wooded area repeatedly searched. It was about four miles from her home, southeast of New Holland.

"I just told them some of the things that we went through. And told them that we're praying for them," said Fisher, 85, who lives with one of her three children in Elverson.

"Other than that, just to be with them," she said. Fisher also visited the Stoltzfoos family briefly on Monday.

When the Fisher family was going through its ordeal, having people visit was comforting, Fisher said.

For the Fishers, it was acquaintances Fay and Hiram Overly, who would become friends.

Fay Overly, a school teacher and writer, would go on to write a book about the case: "Missing: A Family's Triumph In The Tragedy No Parent Ever Wants to Face."

Fisher gave a copy of the book, which came out in 1985, to the Stoltzfoos family.

The book describes how the Fisher family relied on their Christian faith and lists counseling services and other resources for families of missing children.

"The Lord took us through and he will take them through, also," Fisher said in a phone interview Wednesday. "Because the Lord is good, no matter what. ... He doesn't give you the strength until you need it."

Uncertainty. Suspects soon identified. Massive searches — Fisher's search was the largest in county history to that point, involving an estimated 3,000 people, according to newspaper archives.

"It was so hot when she was missing. It was just the same as the weather we're having now," she said.

But there are differences.

Zimmerman had once lived next door to the Fishers. He had hired Evelyn to clean the house and she was last seen leaving her house to go there.

The night she went missing, police responded to a call for a possible hostage situation at his Leola apartment.

Early the following morning, with police help, Zimmerman checked into a mental hospital. He had been depressed and had written a suicide note; several days before, his wife filed for divorce.

Police charged him with Fisher's murder on Nov. 7, 1980, more than three months after her disappearance. Investigators said the legal complexities of the case prevented them from charging Zimmerman sooner.

Investigators theorized he abducted the girl and killed her in the Welsh Mountains. A defense psychiatrist said Zimmerman essentially saw his wife in her.

His trial was held in Northampton County because publicity here would have made getting an impartial jury difficult, if not impossible: The case — like Stoltzfoos' disappearance — had huge public interest.

Though prosecutors sought the death penalty, a jury sentenced Zimmerman to life in prison. Now 68, he is in inmate at the State Correctional Institution at Fayette, about 30 miles south of Pittsburgh.

He is being held at Lancaster County Prison without bail.

According to prosecutors, Smoker abducted Stoltzfoos less than a half-mile from her home on Beechdale Road as she was walking home from church on Stumptown Road. That's about six miles east of Lancaster's square, near Bird-in-Hand.

Police arrested Smoker in part based on a homeowner’s video surveillance that showed his car near a person believed to be Stoltzfoos, according to prosecutors.

That Stoltzfoos’ bra and stockings were found buried near where Smoker’s vehicle was seen “lends only to the conclusion that she suffered harm," Lancaster County District Attorney Adams said at a news conference last week where law enforcement implored the public for help.

The FBI is offering a $10,000 reward for information leading to Stoltzfoos' recovery.

The worst part for families of those who vanish is the uncertainty.

"The waiting is the worst. The not knowing is worse than knowing," Fisher said.

Until Evelyn’s body was found, Fisher held out hope that she could still be alive. Her late husband, Andrew Fisher, who died three years ago after a car crash, had given up hope earlier, she said.

When police found their daughter's body, it did not bring closure but, she said, "At least we knew where she was and what was was going on. We knew she was in heaven."

Did she have any advice for the Stoltzfoos family beyond faith and prayer?

"No. But I have advice for the other family. When Evie was missing, (Zimmerman's) sister would go to visit him and she kept in contact with him," she said. "That is how is how we finally found out where she was."

Zimmerman had given his sister information that helped police find Fisher's body.

So if Smoker or his family know something, they should tell police, Fisher said.

Smoker's attorney declined comment Wednesday. His next court appearance, a preliminary hearing, has not been rescheduled.

Who is Justo Smoker? Here's what we know about the man charged with kidnapping Linda Stoltzfoos

The search for missing Amish teen Linda Stoltzfoos is expected to continue today in Lancaster County, more than a month after her June 21 disa…

Accused of holding a knife to a 5-month-old baby’s neck, a Millersville-area woman now faces a felony charge of endangering the welfare of a c…

On Sunday, June 21, 18-year-old Linda Stoltzfoos never returned to her Upper Leacock Township home after church. She was last seen on Stumptow…

Almost a month and a half after Linda Stoltzfoos' disappearance, efforts to find the missing woman have come up short.

A Paradise Township man accused of kidnapping Amish teenager Linda Stoltzfoos has been ordered to stand trial after a preliminary hearing Wednesday.