Health officials speak with extra urgency this year when they urge Lancaster County parents to vaccinate their children before school starts.

The U.S. is having its worst measles outbreak since 1992, with one case confirmed here in June and two others linked here — and in Pennsylvania only three rural counties have higher overall rates of students exempted from school vaccination requirements.

On Friday a nine-person panel including state officials, local doctors and advocates gathered in Lancaster to emphasize the importance of vaccines and reiterate that they are safe.

Dr. Paul Offit, director of the Vaccine Education Center at Children's Hospital of Philadelphia, said he was in that city in 1991 during a measles epidemic of 1,400 cases and nine deaths.

“Our city was in a panic,” he said, noting that the outbreak centered around two fundamentalist churches that did not believe in vaccination or medical care and ended after a court ordered compulsory vaccination.

There are currently no known Pennsylvania cases of measles in which a person would be infectious, according to the state department of health.

From NPR: How Philadelphia Mandated Vaccinations In 1991

This will be the third year of tightened regulations that exclude students from class after five days of school if they have not gotten the required immunizations or registered exemptions.

It was a big change, and the first year saw hundreds of students temporarily out of classes despite districts’ strenuous efforts to prepare for it. But school officials said the second year went much more smoothly, as families were generally familiar with the requirement by then and some districts organized events to make vaccinations more accessible.

Most insurance plans are required to provide vaccinations without charging co-pays or co-insurance, state officials said, and for those without insurance, there’s a state program where people can make appointments by calling 1-877-724-3258.

The Pennsylvania Department of Health’s latest public data shows up to 9.5% of students here are exempted from some or all vaccinations they would otherwise be required to have.

However, there are caveats: the data lags a year and includes only students in kindergarten and seventh grade.

Additionally, LNP got more detailed data from the department earlier this year that shows average exemption rates here vary widely, at 4% for public schools; 12% for private schools with at least 20 students in the classes surveyed; and 45% for the smallest schools.

LNP’s analysis included information on individual schools, and can be seen here. 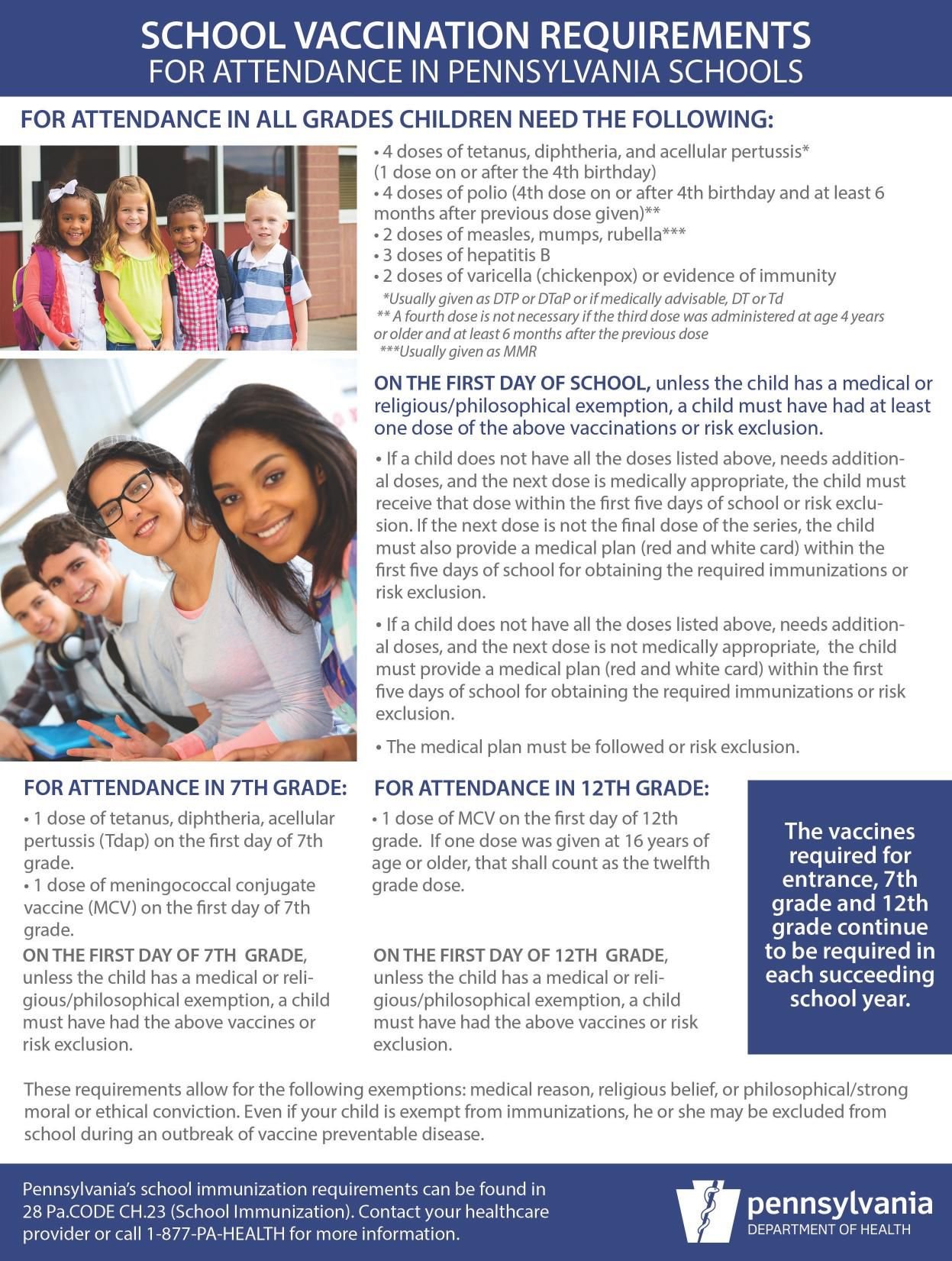 As late summer approaches, the U.S. Centers for Disease Control and Prevention is urging doc…

Back to school: Here's when Lancaster County students start the 2019-20 school year

Believe it or not, Lancaster County students return to school this month.

Under the tighter regulations that went into effect in 2017, students have the until the fifth day of school to get the required immunizations or register exemptions.

There is an allowance for cases when medical guidelines say part of a multi-dose vaccination cannot be administered within that time frame.

Since 1991, ChildProtect has vaccinated more than 75,000 Lancaster County children

Measles case confirmed in central Pennsylvania; here's how to find out if you might have been exposed

A case of measles has been confirmed in central Pennsylvania.

As a result, 12 schools, day care centers or other programs were closed, while others were fined, said Dr. Demetre Daskalakis, the city health department’s deputy commissioner of disease control. In addition, a few hundred people received violations for being unvaccinated. Some individuals’ cases were dismissed, he said, others paid fines.

Pennsylvania's latest measles patient is a York doctor who was fully vaccinated against the disease, according to a social media post by WellS…

Pa. has had at least 300 mumps cases this year; 9 recently confirmed at Moravian College

Pennsylvania is one of two states that have had at least 300 confirmed or likely mumps cases so far this year, according to the U.S. Centers f…

Philadelphia International Airport visitors may have been exposed to measles; here's how to tell if you're at risk

Those who visited the Philadelphia International Airport in Delaware County earlier this month could have been exposed to measles.

A licensed practical nurse has filed a lawsuit against Penn Medicine Lancaster General Health, claiming religious discrimination in her dismis…