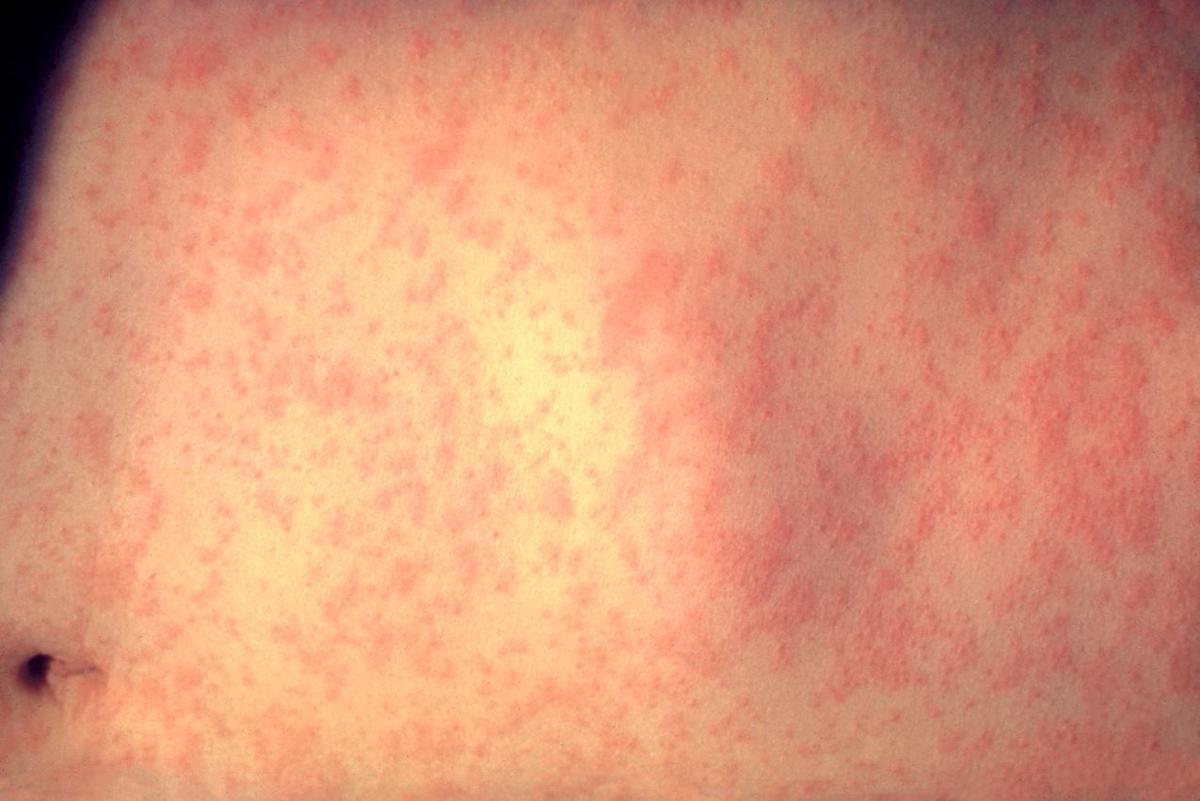 This photograph from the Centers for Disease Control and Prevention shows the skin rash on a patient’s abdomen three days after the onset of a measles infection. 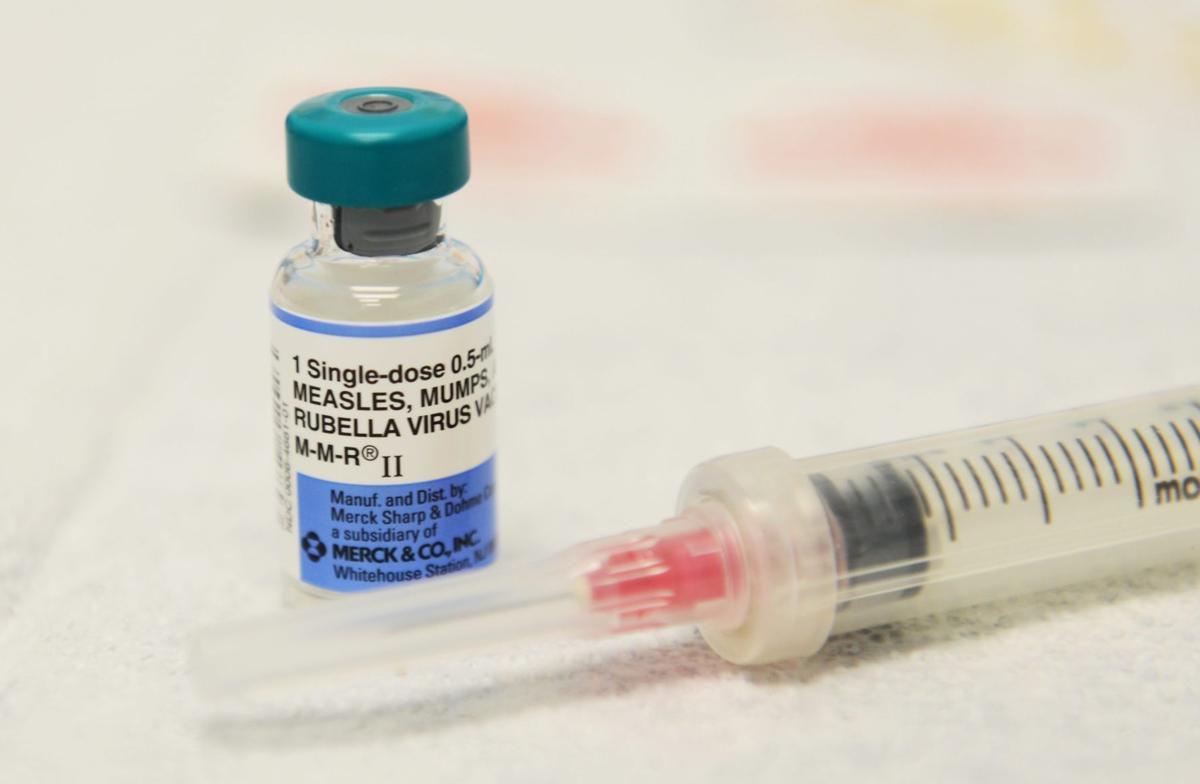 The MMR vaccine protects against measles, mumps and rubella.

This photograph from the Centers for Disease Control and Prevention shows the skin rash on a patient’s abdomen three days after the onset of a measles infection.

The MMR vaccine protects against measles, mumps and rubella.

The first case of measles in Lancaster County since 2001 was confirmed this week, health officials said, bringing the year’s total to nine statewide in the largest outbreak of the virus nationwide since 1992.

“This case is associated with travel to another state and was not acquired in Pennsylvania,” state Department of Health spokesman Nate Wardle said. “In addition, there were no public exposures in Pennsylvania.”

Officials always urge people to protect themselves and others by getting vaccinated, but beyond that are not recommending any special precautions at this time.

The case was confirmed on June 26 and officials conducted multiple interviews with the patient to confirm there were no public exposures, according to Wardle.

Asked where in the county the case is, he said, “We only share county information on cases unless there are public exposures we need to alert the public to, which there are not in this case.”

Wardle noted that it is "essential that people are vaccinated in order to protect themselves, their loved ones and the community against serious, life-threatening diseases such as measles, polio, whooping cough and others."

There have been more than 1,000 cases of measles across 28 states this year, and health officials have blamed parents who refuse to have their children vaccinated for the outbreak.

The Lancaster County case and seven others in Pennsylvania were in people who were not vaccinated, according to Wardle, and the vaccination history of the ninth is unknown.

Most of the people affected in the recent outbreaks — especially children — have not been vaccinated, according to the U.S. Centers for Disease Control and Prevention.

“But at this point there’s no reason to panic,” he said, noting that “There’s been no local transmission within Lancaster County; this was an imported case.”

Vaccination against measles usually starts at 12 months, he said, but “if we had an outbreak in Lancaster County, which we do not, then 6-month-olds could be vaccinated.”

He recommended that people not sure of their vaccination status talk to their doctors.

Kontra said that at this time, Lancaster General Health is not instituting anything beyond the general preparations it has made in the last few months. Those preparations include asking questions when setting up doctor’s office visits so anyone who may have been exposed to measles is kept away from other patients.

And, he said, primary care offices have seen a big uptick in measles vaccinations in the past few months.

Dr. John Goldman, infectious disease specialist at UPMC Pinnacle, described similar precautions there, saying, “We encourage anyone who suspects they or their child has measles to call their health care provider to receive guidance prior to visiting the doctor’s office.”

Penn State Health reported similar precautions, according to spokesman Scott Gilbert, who said records show pediatricians of Penn State Children's Hospital have administered almost twice as many measles vaccinations in April and May as during the same period last year.

"Should a patient or family member call to report a suspected case of measles, the individual in question would be asked to self-isolate at home unless significant symptoms develop," he said. "Should they need to seek medical care, we would ask them to call either their primary care physician’s office or the emergency department before coming so that staff could prepare to isolate the patient immediately and prevent exposure to others patients and visitors."

The CDC says measles symptoms appear seven to 14 days after contact with the virus “and typically include high fever, cough, runny nose, and watery eyes,” with the measles rash appearing three to five days after the first symptoms.

According to the CDC, measles patients can infect others even before they realize they have the disease.

Measles can be serious, with children younger than 5 years of age and adults older than 20 years of age more likely to suffer from complications, which the CDC describes as follows.

— About 1 in 5 unvaccinated people in the U.S. who get measles are hospitalized.

— As many as one 1 of every 20 children with measles gets pneumonia, the most common cause of death from measles in young children.

— About 1 child out of every 1,000 who get measles will develop encephalitis (swelling of the brain) that can lead to convulsions and can leave the child deaf or with intellectual disability.

— Nearly 1 to 3 of every 1,000 children who become infected with measles will die from respiratory and neurologic complications.

— Measles may cause pregnant women who have not had the MMR vaccine to give birth prematurely, or have a low-birth-weight baby. 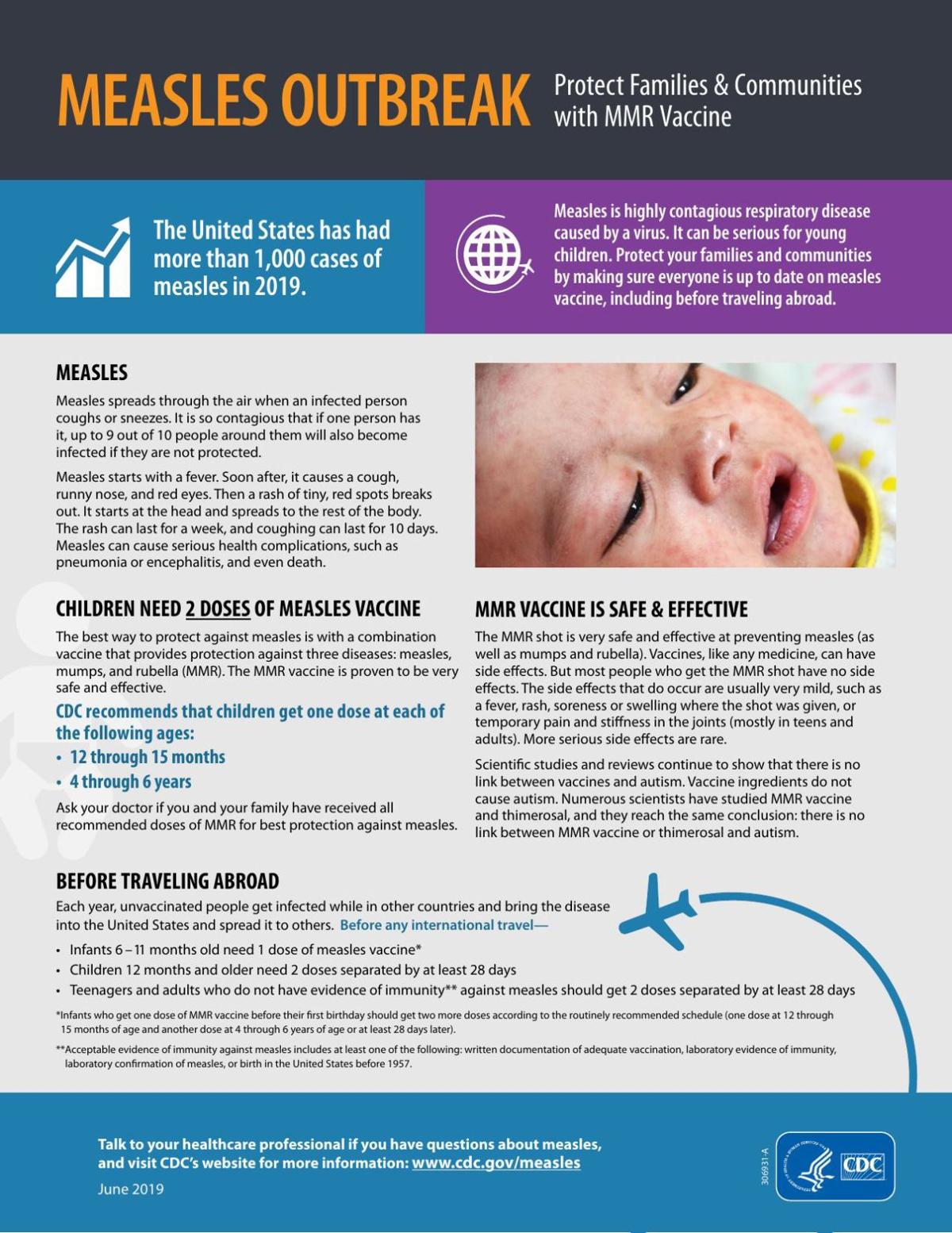 8 of the 1,044 confirmed U.S. measles cases have been in Pennsylvania

30 years after starting Strasburg clinic, Dr. Morton dedicates another in the Belleville area

Here's a look at the most-read stories on LancasterOnline.com between June 24 and June 30.

Past measles cases had links to Lancaster County, officials say

“These are all people who no longer have the disease,” he said. “It’s important to know where they got sick from, how they became sick; that’s the work we are doing now.”

A young man who had just turned 18 showed up at the Virginia office of Drs. Sterling and Karen Ransone earlier this month and asked for the va…

Measles case confirmed in central Pennsylvania; here's how to find out if you might have been exposed

A case of measles has been confirmed in central Pennsylvania.

Second case of measles suspected in York County: here's how to find out if you might have been exposed

There is a second suspected case of measles in York County, according to the Pennsylvania Department of Health.

Pennsylvania's latest measles patient is a York doctor who was fully vaccinated against the disease, according to a social media post by WellS…