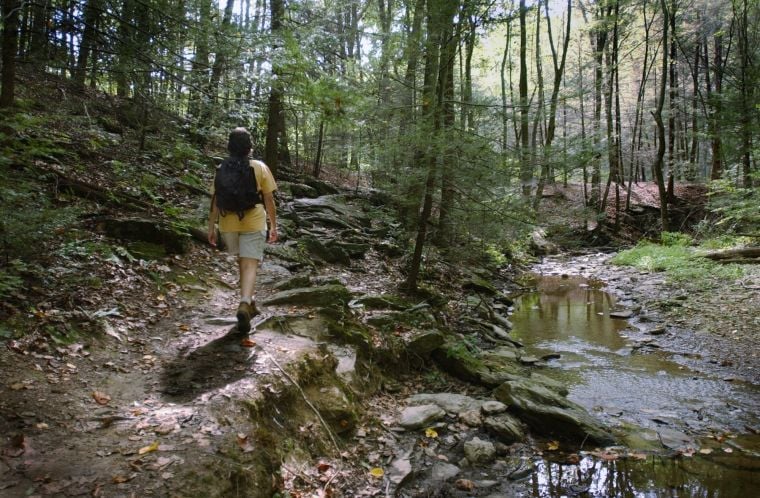 A hiker in Tucquan Glen Nature Preserve. A proposed natural gas line might pass through woods in the preserve. 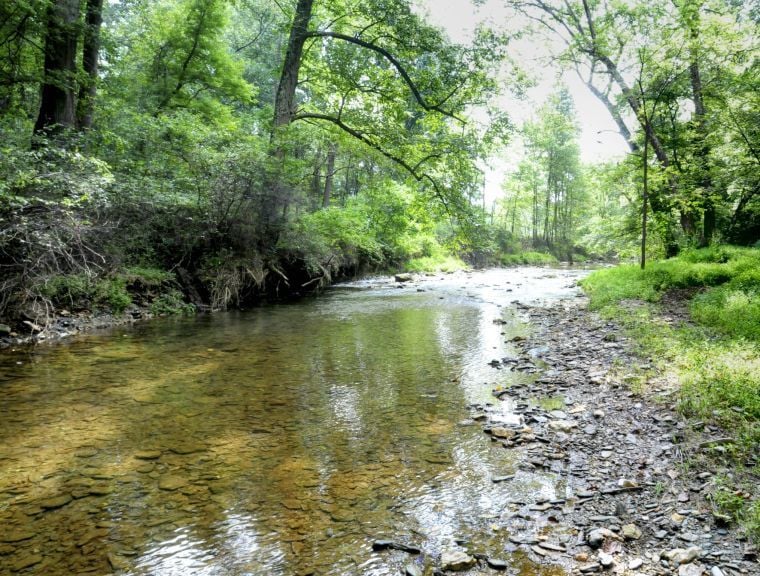 A proposed natural gas pipeline would cross Fishing Creek, rated exceptional value by the state, and woods near the Fishing Creek Nature Preserve in Drumore Township. 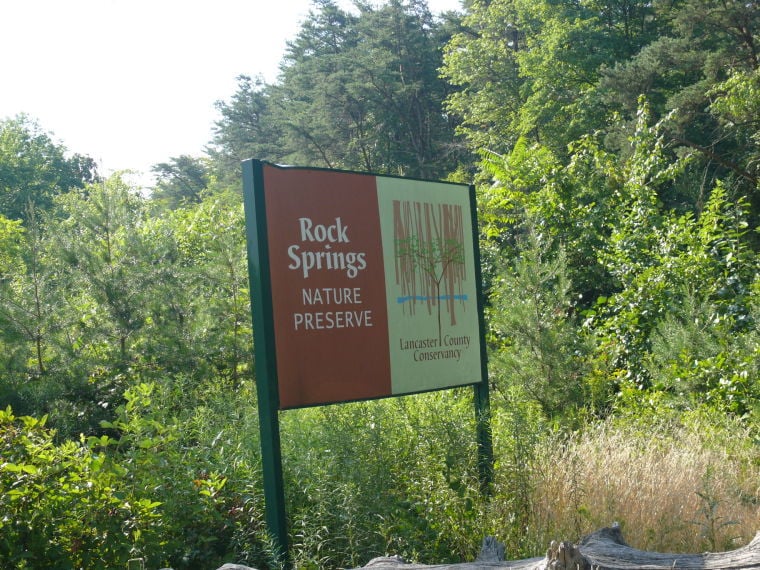 A water pipeline might infringe on the edge of serpentine barrens in the Rock Springs Nature Preserve. 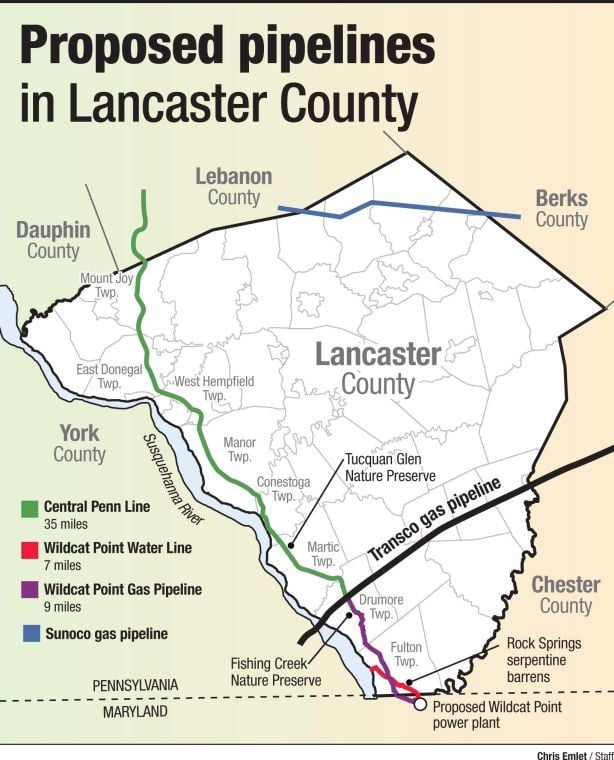 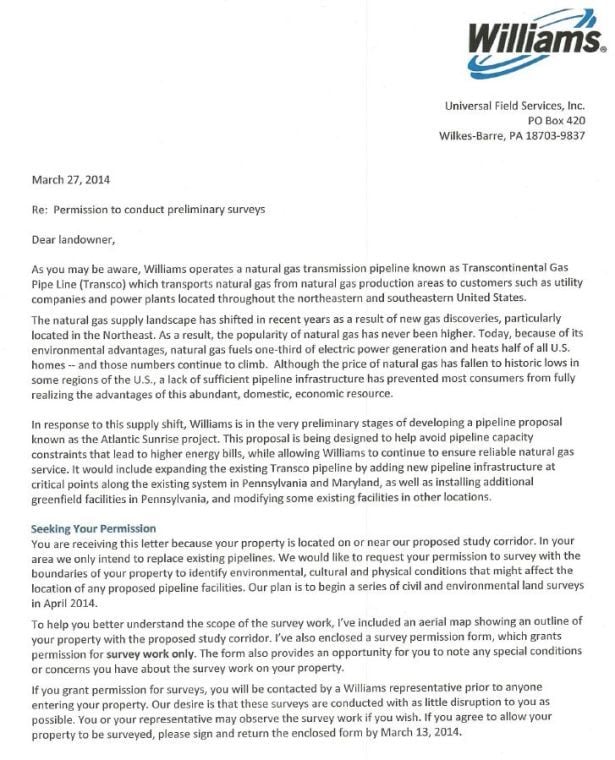 This is part of a letter pipeline officials have sent landowners near Tucquan Glen Nature Preserve. 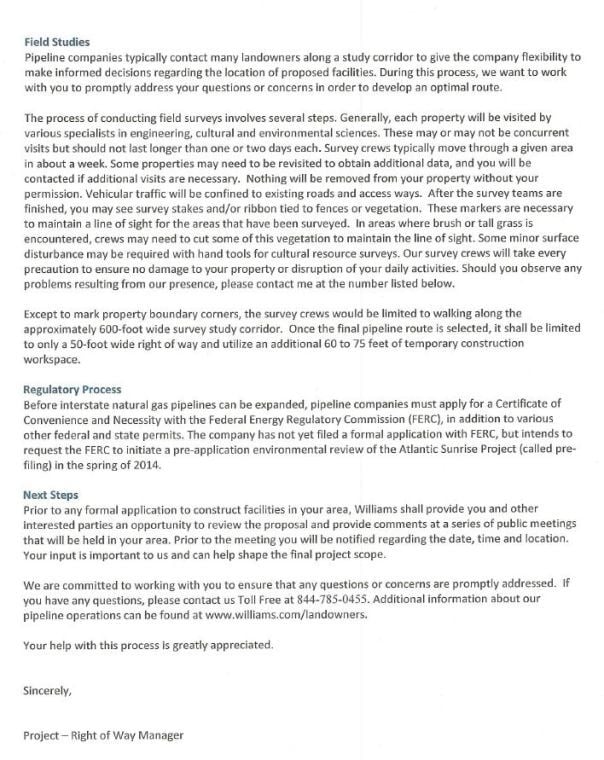 This is the continuation of a letter sent to landowners near Tucquan Glen Nature Preserve.

A hiker in Tucquan Glen Nature Preserve. A proposed natural gas line might pass through woods in the preserve.

A proposed natural gas pipeline would cross Fishing Creek, rated exceptional value by the state, and woods near the Fishing Creek Nature Preserve in Drumore Township.

A water pipeline might infringe on the edge of serpentine barrens in the Rock Springs Nature Preserve.

This is part of a letter pipeline officials have sent landowners near Tucquan Glen Nature Preserve.

This is the continuation of a letter sent to landowners near Tucquan Glen Nature Preserve.

It may not be on the drilling front line, but four new proposed pipelines make it clear that Lancaster County is inextricably intertwined with Pennsylvania’s Marcellus Shale natural gas rush.

Three of the four would snake through natural areas and woods near the Susquehanna River and that has some officials and conservation groups worried.

Though none of the pipelines would carry natural gas for use here, Kathie Shirk Gonick of the Lancaster County Conservancy, for one, frets about the various pipelines’ impact on the “last bastion” of continuous woods in the River Hills and impacts on headwaters to various Susquehanna tributaries.

“There are a lot of options (for routing the pipelines), and hugging the river, I don’t think, is a good one,” says the conservancy’s director of land preservation.

Adds a county official who did not want to be identified, “We’re growing by 40,000 people over every decade. There’s a lot of pressure on our natural lands. When you start looking at pipelines chipping away at the edges, it’s really kind of an assault on our natural lands.”

The pipeline would enter Rapho Township from Lebanon County, near Lawn, and then pass near Rheems, then over to the Marietta area where it would follow close to the Susquehanna before intersecting the existing Transco pipeline south of Holtwood.

• The proposed $675 million Wildcat Point natural gas power plant just south of the Lancaster County line in Cecil County, Md., would result in a 9-mile gas pipeline through Solanco 1.25 miles from the river from the state line to the existing Transco gas pipeline, 3.6 miles southeast of Rawlinsville, Martic Township.

Construction could begin in 2015.

The Old Dominion Electric Cooperative project would run through forested land near the conservancy’s Fishing Creek Nature Preserve and cross seven streams, including Fishing Creek, a stream with water quality rated as “exceptional value” by the Pennsylvania Fish and Boat Commission.

The PFBC has expressed concern about the various stream crossings on the Chesapeake logperch, a globally rare fish.

Construction could begin later this year.

• A related 7-mile water pipeline to bring water to the power plant would run from the Susquehanna to the new plant. The proposed route would mostly follow two roads but would affect the edge of serpentine barrens at the conservancy’s Rock Springs Nature Preserve.

No new pipeline would be built but Sunoco might build a new pumping station somewhere in the two townships.

Officials for Houston-based Williams Partners, which would build and operate the Central Penn line, say they haven’t even started surveying a 1,200-foot-wide exploratory corridor for an eventual 50-foot-wide pipeline right of way.

But the conservancy was recently sent a map showing the pipeline corridor going through its Tucquan Glen Nature Preserve in Martic Township. And residents in the proposed corridor area have been sent form letters seeking permission to allow survey teams on their properties.

Tucquan is one of the acknowledged natural gems in the county.

The tentative route would not be in the heavily traveled gorge side of River Road. But that’s no solace for Gonick.

“It would be splitting an interior forest in half,” she says, “which is the whole point of preserving large swaths of forest instead of little pockets, because only in large swaths do you get certain species that are really good for sustaining a healthy environment for all of us.”

She cites the ability of trees to clean the air “in a county that has terrible air quality.” The forests in the River Hills also are important to water quality, especially for the Chesapeake Bay which is undergoing a massive cleanup, she adds.

Williams spokesman Christopher Stockton says plans are to use the existing electric line corridors of PPL and Exelon in Lancaster County where possible. But he says the pipeline would also pass through farmland and forested areas along the Susquehanna. The routing, he points out, “is subject to change.”

He says the pipeline would not cross Susquehannock State Park.

Stockton says a thorough environmental analysis will be done. At a presentation on the pipeline last month to Lebanon County Commissioners, Williams’ Cindy Ivey said the goal is to “avoid, minimize and then mitigate” natural resources.

Lebanon commissioners had a litany of environmental impact concerns about the pipeline.

“If you’re going to do this and we have no choice in the matter, we want it done right,” Commissioners chairwoman Jo Ellen Litz said at the meeting. “I will be watching this very closely. This is our backyard.”

Ivey noted that farmers will be able to plant crops over the pipeline right of way.

But trees will not be allowed to be re-planted in the swath. That perpetually cleared stripe through a forest is harmful and causes “irreversible damage,” Gonick says. For one thing, it attracts invasive plant species, she says.

Williams has not yet briefed Lancaster County officials on the project, as they have in Lebanon County, but they say they will.

The Central Penn Line is part of a massive $2 billion pipeline expansion, called Atlantic Sunrise, to scoop up the large quantities of natural gas being produced by fracking in the Marcellus Shale region of Pennsylvania.

None of the gas that would flow through Lancaster County would go for local use. Instead, gas would be able to flow from north to south for the first time on Transco, the nation’s largest gas pipeline.

Gas from Marcellus Shale could be whisked away to markets in Washington, D.C., Baltimore and New York.

The pipeline could pass within 25 feet of existing structures.

The Central Penn Line would be 177 miles long and run from Susquehanna County in the heart of fracking country to a pumping station in York County.

Williams plans to file an application before the Federal Energy Regulatory Commission next month. The current schedule has construction of the pipeline to begin in the summer of 2016.

After the filing is made, there will be public meetings by FERC for affected landowners and the public  to comment.

A FERC approval of the project would carry the right of eminent domain.

Williams officials told Lebanon County officials that “We have not found a reduction in property value because of easements.”

However, in Texas, there have been three recent court cases where landowners won verdicts with the contention that gas pipelines devalued their overall properties, not just the strip of easement.

The Lancaster County Conservancy has adopted a strategy to share with pipeline officials everything they can about sensitive areas they might pass through in Lancaster County.