The Manheim Township School District has paid more than $66,000 to a law firm investigating an undisclosed personnel issue since the summer, records obtained by LNP this week show.

The superintendent and members of the school board have repeatedly declined to comment on the nature of the issue. And they have taken no public action in the case even after taxpayers have been billed for more than 300 hours in legal fees at rates of up to $190 an hour.

An electronic copy of the district’s contract with the Levin Legal Group, obtained through a Right-to-Know request, is titled “6-10-2015 Signed Engagement ltr FROM Mike Levin Re. Superintendent Harassment.”

The district’s superintendent, John Nodecker, could not be reached for comment Tuesday. This is his second year at the district.

The Montgomery County law firm has billed the district for at least $66,546 since being hired in June to look into the personnel issue.

Levin Legal Group's services for the months of September and October totaled $20,884, according to invoices obtained this week through a Right-to-Know request.

Levin Legal Group billed the district for 332 hours in June through October.

Manheim Township School Board President William Murry said on Tuesday that the fees were "something the district had to do."

"It's difficult to quantify if the district got its money worth," he said. "The time and effort were certainly accounted for."

Murry declined to provide details on what the legal fees were for. The invoices were heavily redacted.

Numerous charges were for emails and calls with district solicitor Bob Frankhouser.

In addition to professional service fees, Frankhouser's former law firm — Hartman, Underhill & Brubaker LLC — billed the district more than $3,100 for "investigation" services in August and October, according to district treasury reports. Murry confirmed that those charges were related to the same personnel matter as the invoices from Levin Legal Group.

Frankhouser, now with the firm of Barley Snyder, declined to comment on the investigation on Tuesday.

In an earlier instance of Levin Legal Group being hired in Lancaster County, the investigation was followed by a local superintendent stepping down.

Neither Clark nor the Manheim Central board spoke publicly about why they parted ways. 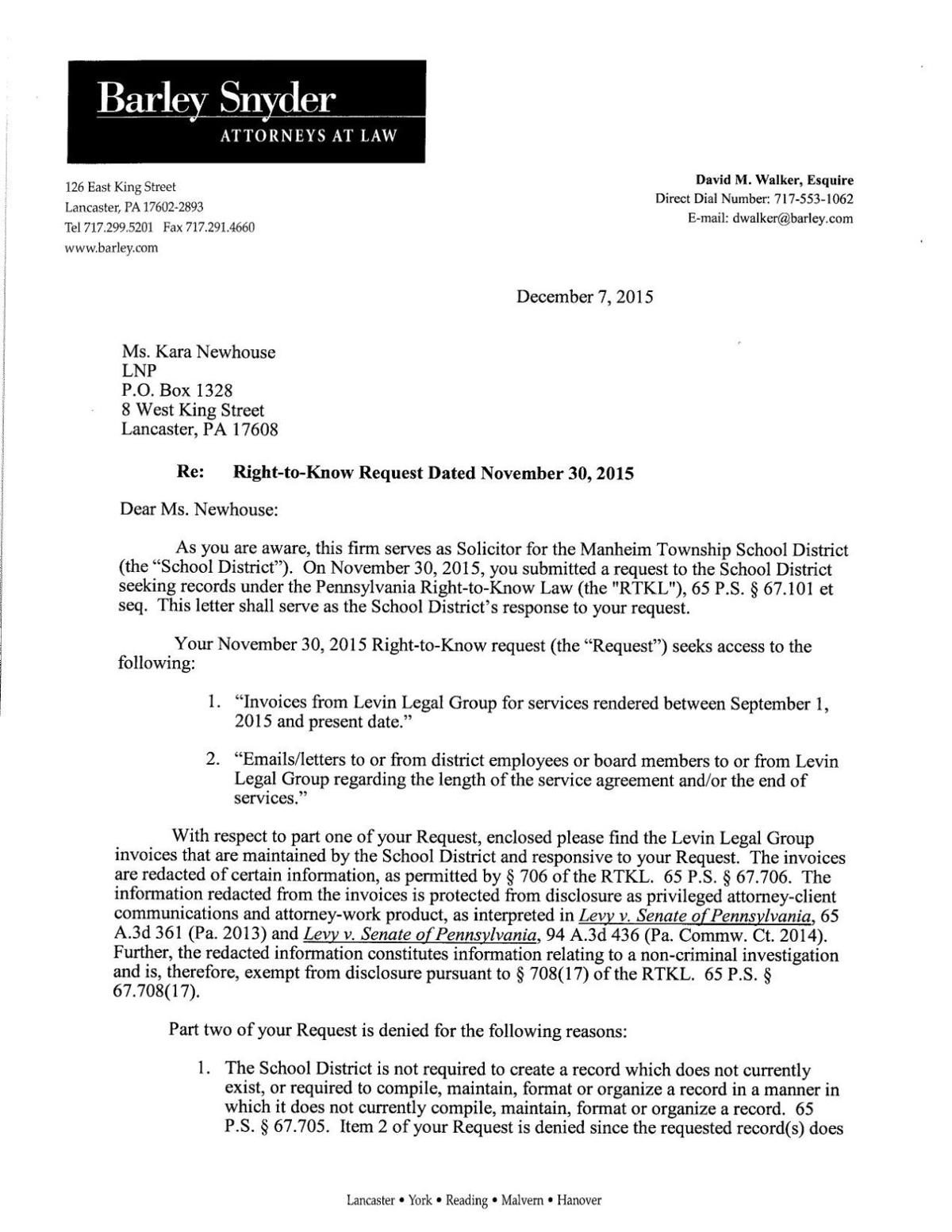 The Manheim Township school board conspired to deliberate privately on its search for a new superintendent even as it promised greater transparency in the wake of earlier violations of the Sunshine Act, an audio recording obtained by LNP reveals.