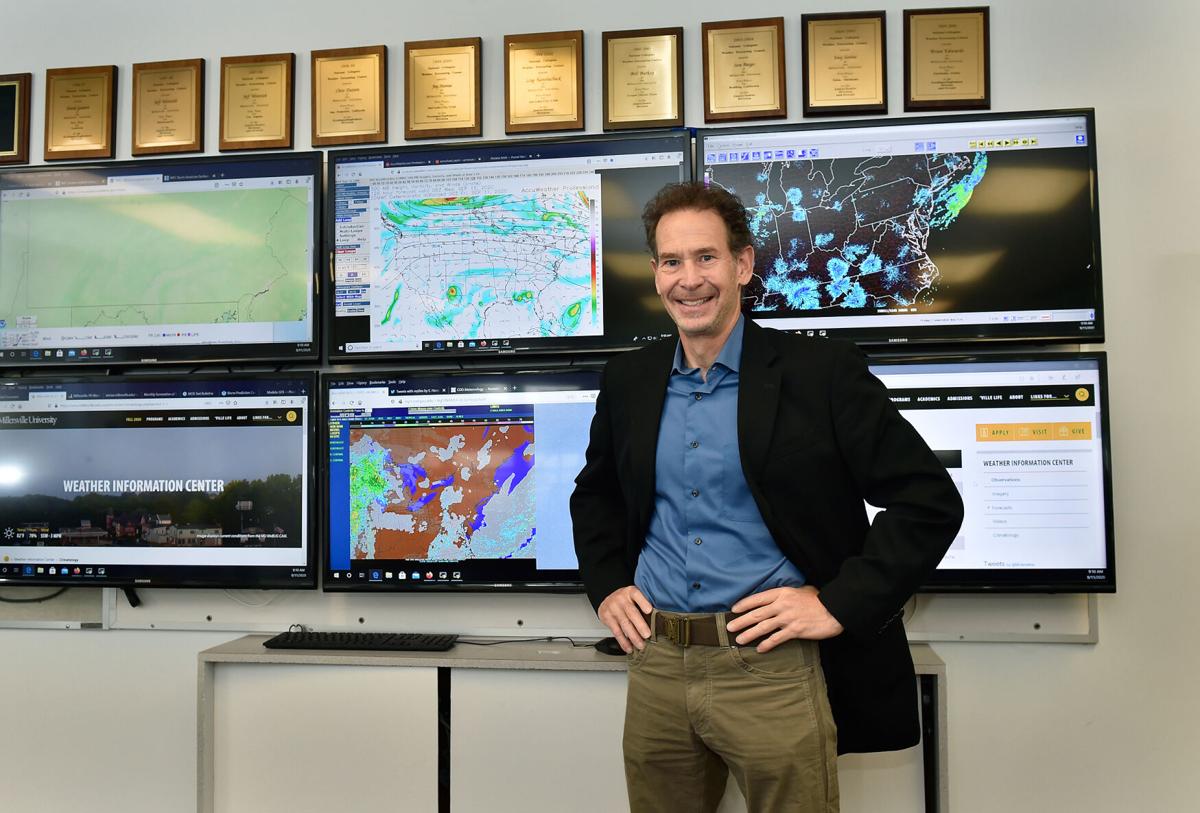 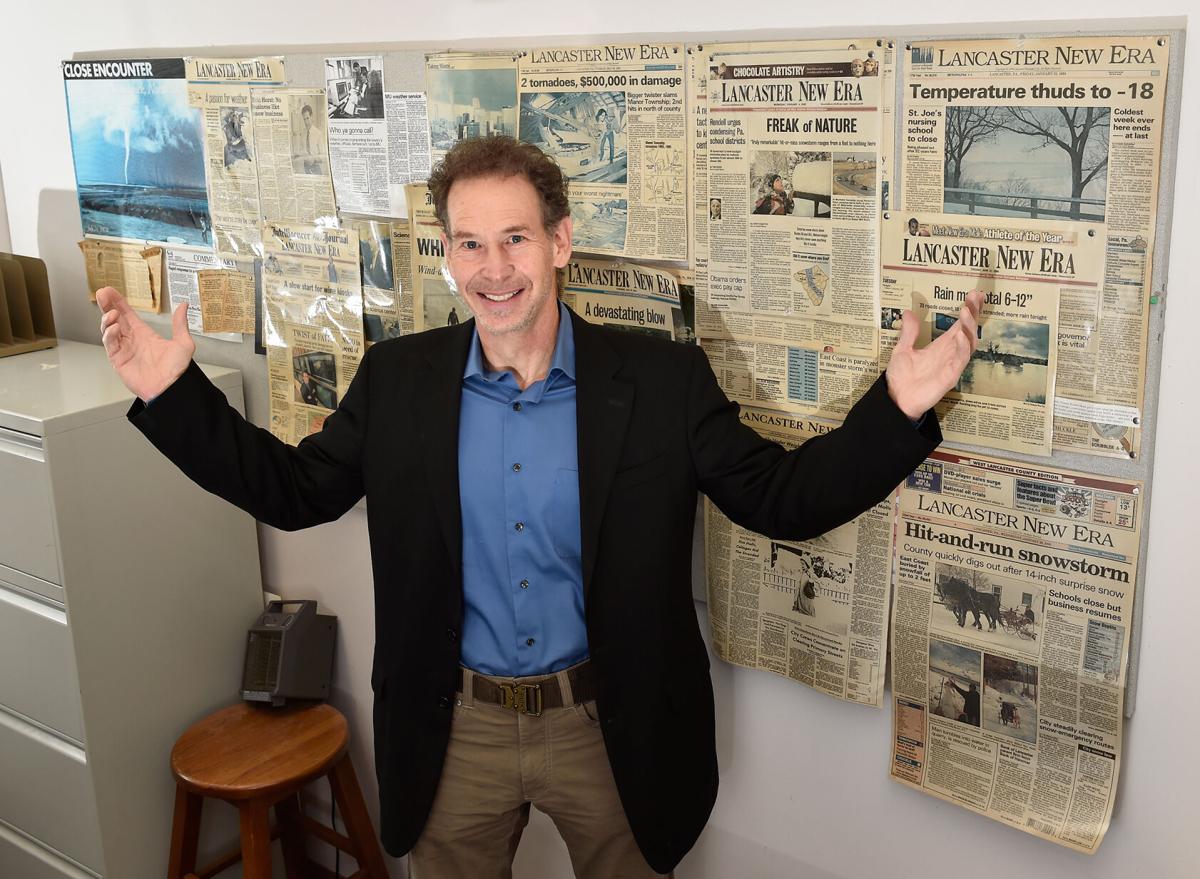 Retiring Millersville University meteorologist Eric Hörst is pictured in his office with a collection of news headlines for some of Lancaster County's damaging storms on Friday, September 11, 2020.

Retiring Millersville University meteorologist Eric Hörst is pictured in his office with a collection of news headlines for some of Lancaster County's damaging storms on Friday, September 11, 2020.

A groom sweating the weather on his wedding day.

A youth football coach wondering if you can get practice in.

A Pennsylvania Department of Transportation official deciding whether to call out the snow plows in the middle of the night.

An LNP | LancasterOnline reporter looking for details about a possible storm still several days away.

Who do you call?

After 32 years as one of Lancaster County’s most accessible, trusted and straight-shooting meteorologists, Horst has retired as director of Millersville University’s Weather Information Center to pursue his other passion: rock climbing.

An admitted weather geek, Horst, 56, is pulling back from the all-night vigils of watching a storm unfold, posting tweets and mentoring college students.

Reaction was swift when the lifelong Manheim Township resident announced his retirement at the end of August.

“I have his autograph in a little frame on my bookshelf because we all consider him a superhero,” said April Hershey, superintendent of the Warwick School District. She sent many an anxious email to Horst, asking for his best advice about a predicted storm.

“Lancaster County public safety counted on him for decades behind the scenes,” Gockley said.

So did the eight counties in PennDOT District 8. PennDOT was so impressed with Horst’s forecasting before and during the blizzard of 1993 that they hired him to do weather forecasts tailored for each county. He did that for 26 years, bringing in money for Millersville’s meteorology department and hands-on training for students.

But it was Horst’s obvious personal interest in getting his forecasts right that earned him so many fans —sometimes up to 1.5 million website views a month.

The public rode out storms through Horst’s many tweets, some late at night or before dawn. He was a frequent source for weather predictions and after-storm analysis for LNP | LancasterOnline.

“Nobody has more integrity than Eric,” said Richard Clark, Millersville chair of meteorology. “I miss Eric already. I miss him a lot.”

He said Horst’s mentorship of students as an adjunct professor elevated Millersville to one of the top meteorology schools in the United States. When Horst started at the university in 1988, it had 20 meteorology students. Now it averages 120 a year.

Horst readily admits his obsession to get it right carried pressure.

“One thing that keeps me going is a constant sense of paranoia of what am I missing?” he said. “It’s a crazy business I got myself into. How many people practice their profession in public like that?

“One thing I won’t miss is when those snowstorms or floods would be coming our way and I would feel compelled to stay up and track it,” he said. “Now I can just go to bed and wake up and be surprised.”

The fear of being humbled by Mother Nature, he learned, is well founded.

Horst often told his students that, like it or not, they were learning to forecast in one of the most unpredictable places in the United States.

Still, he built a reputation for accuracy.

“Honestly, there have been times when I wondered if he was actually controlling the weather instead of just predicting it,” said Maureen Mezzetti, a Lancaster city resident.

When Horst did get it wrong, he was quick to admit it.

“I embrace my busts,” he said. “I will never blame it on a model like a lot of forecasters do. I take ownership of my forecasts.”

Too many forecasters take the easy way out and rely on computer models, Horst said. Models don’t factor in local ground observations such as temperature, wind, air pressure, jet stream data and even historical trends for our area, he said.

Horst said he saw his role as a local forecaster this way: “It’s kind of like a quarterback under center, scanning the defense before he takes the snap to see what is the setup and what should he do with the ball.”

That kind of attention to detail long ago impressed Joe Calhoun of WGAL, another of the county’s most popular meteorologists.

“I highly respect Eric, both personally and professionally,” Calhoun said. “He’s a forecaster’s forecaster. Eric is not a model reader. You need to be a scientist first and be able to see when the data supports or doesn’t the model output.”

Horst had a name for forecasters or weather services who had no qualms about garnering online clicks by giving iffy or sensational storm warnings many days before a storm had even formed: “weather mongers.”

Horst refused to make a forecast before he felt enough was known.

“I’m not afraid to say that I just don’t know,” he said. “Why not just admit that you’re vulnerable in a certain scenario and show a little bit of a humble attitude? Your credibility is important. If you cry wolf on a snowstorm, nobody is going to believe you anymore.”

Although he is an unabashed snow lover, Horst was careful not to don what he calls “snow-covered glasses” and let his hope get in the way of professional reason.

“There’s so many little things that can go wrong in the atmosphere that can wreck things here,” he said.

Still, most of the grumbling feedback Horst has fielded over the years came from disappointed snow lovers when predicted snow fell short.

An author and climber

Lancaster County is one of the few places where Horst is best known for his weather forecasts. In most of the world, he is known for his rock-climbing abilities and businesses.

He has written eight books on climbing and training, including a climbing bestseller, “Training for Climbing.”

His books have foreign translations and have been sold in more than 50 countries. His climbing website, trainingforclimbing.com, has more than 100,000 visits a month. He has started a small climbing vitamin supplement company.

Like predicting the weather, Horst, who has climbed since he was 12, finds scaling a rock surface a matter of solving a puzzle.

“I’m still for my age really fit. I have some old-guy climbing goals I’d like to do,” he said.

He hopes to give talks and climb around the world, some with his two sons, Cameron, a professional climber, and Jonathan, who also climbs.

And though he may not be predicting the weather as a profession anymore, the wonder he has felt since he was a kid will still be there.

Will Lancaster County see a lot of snow this winter? Here's what AccuWeather predicts

Those hoping for a white winter may be disappointed, according to the most recent winter weather forecast from AccuWeather.