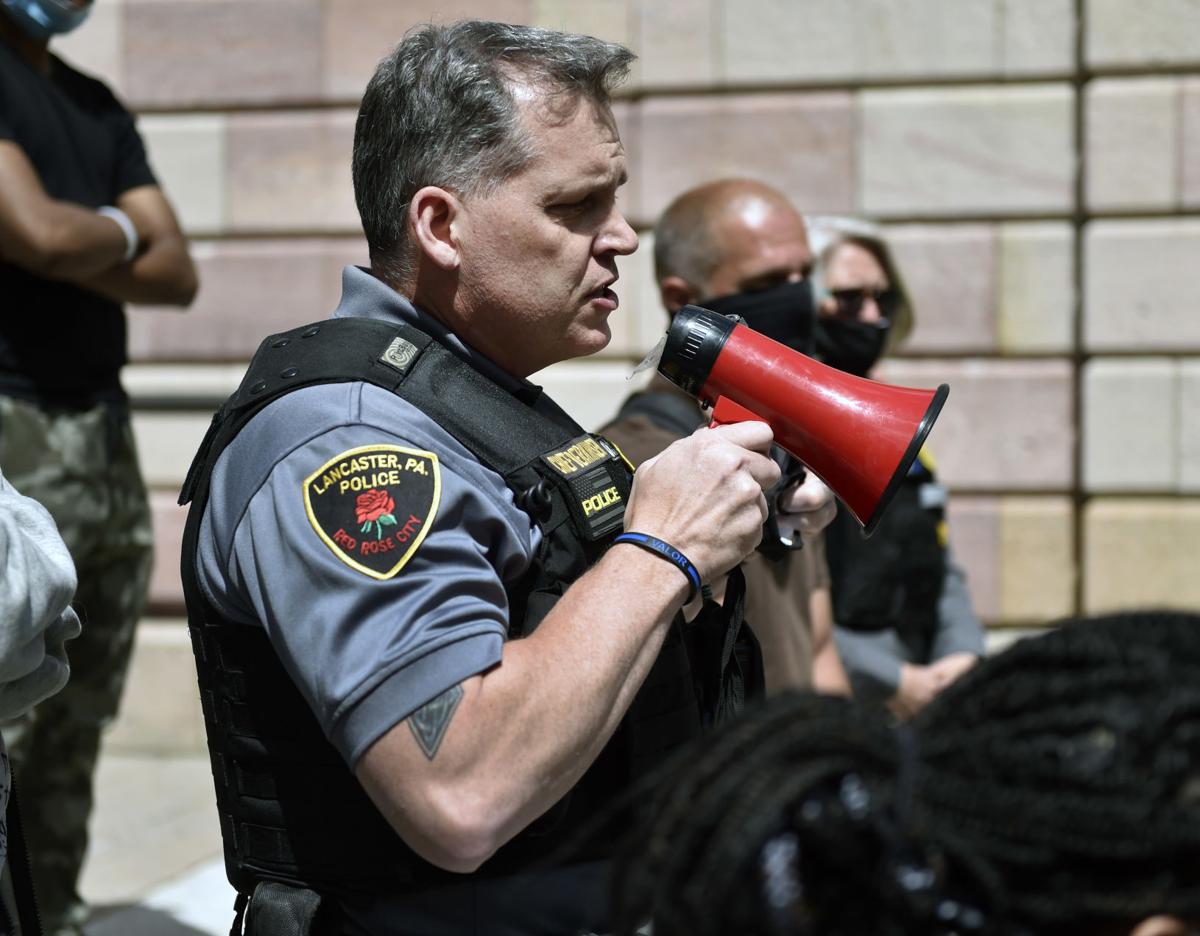 Lancaster police Chief Jarrad Berkihiser addresses protesters on the steps of the county courthouse on June 1, 2020. 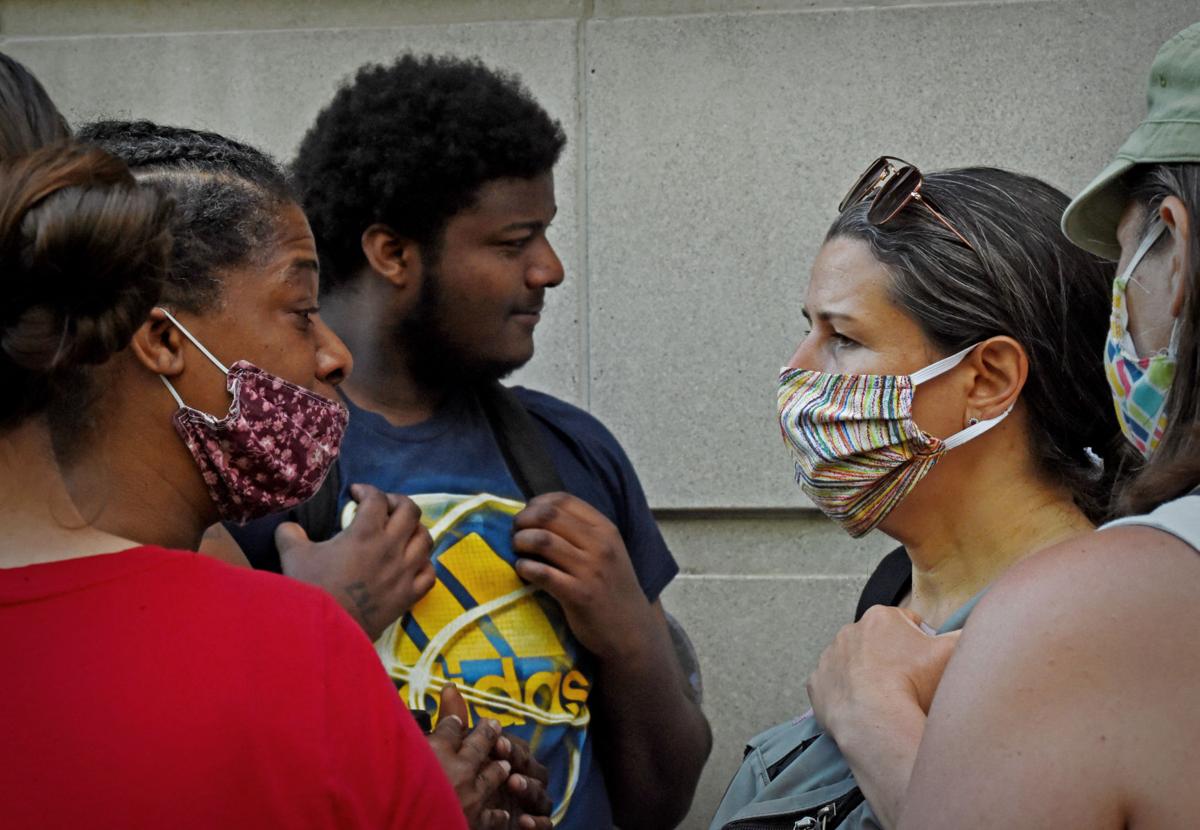 Lancaster Mayor Danene Sorace, right, listens to a protester outside the city police station on West Chestnut Street on Sunday, May 31, 2020. 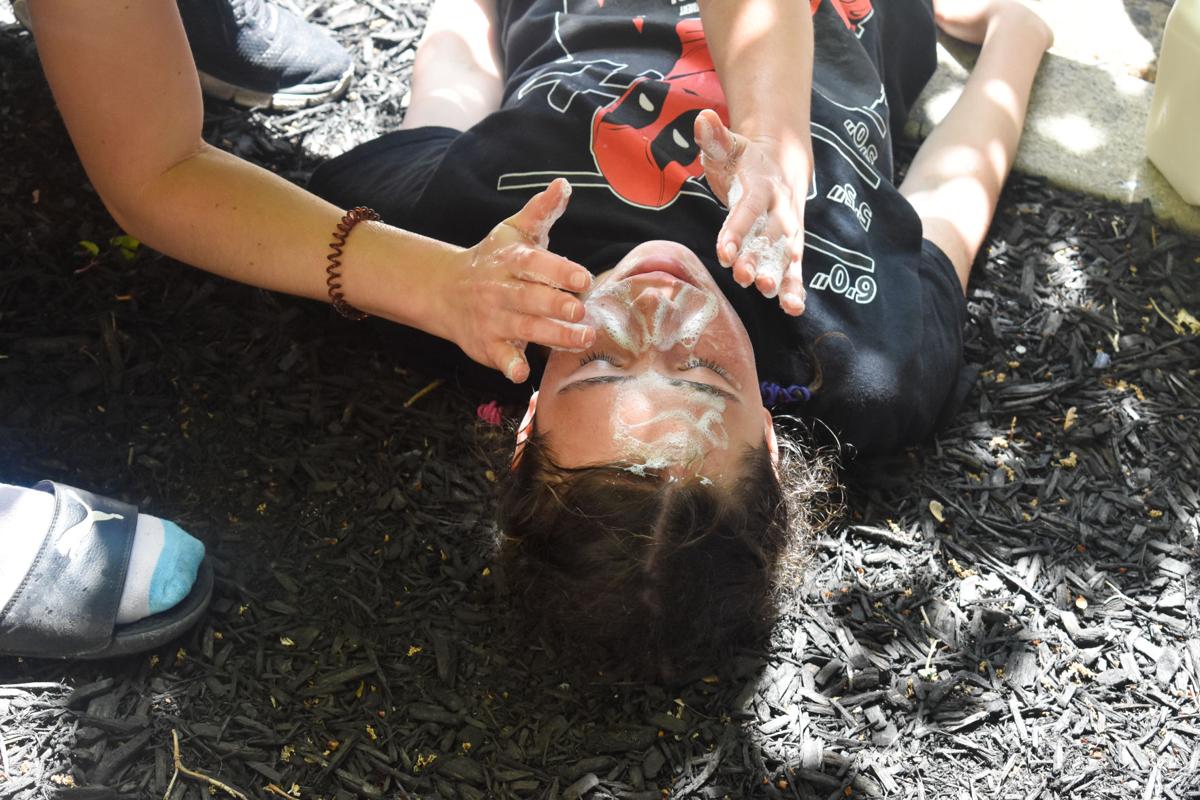 A protester is treated for pepper spray in the eyes May 31, 2020, in downtown Lancaster. 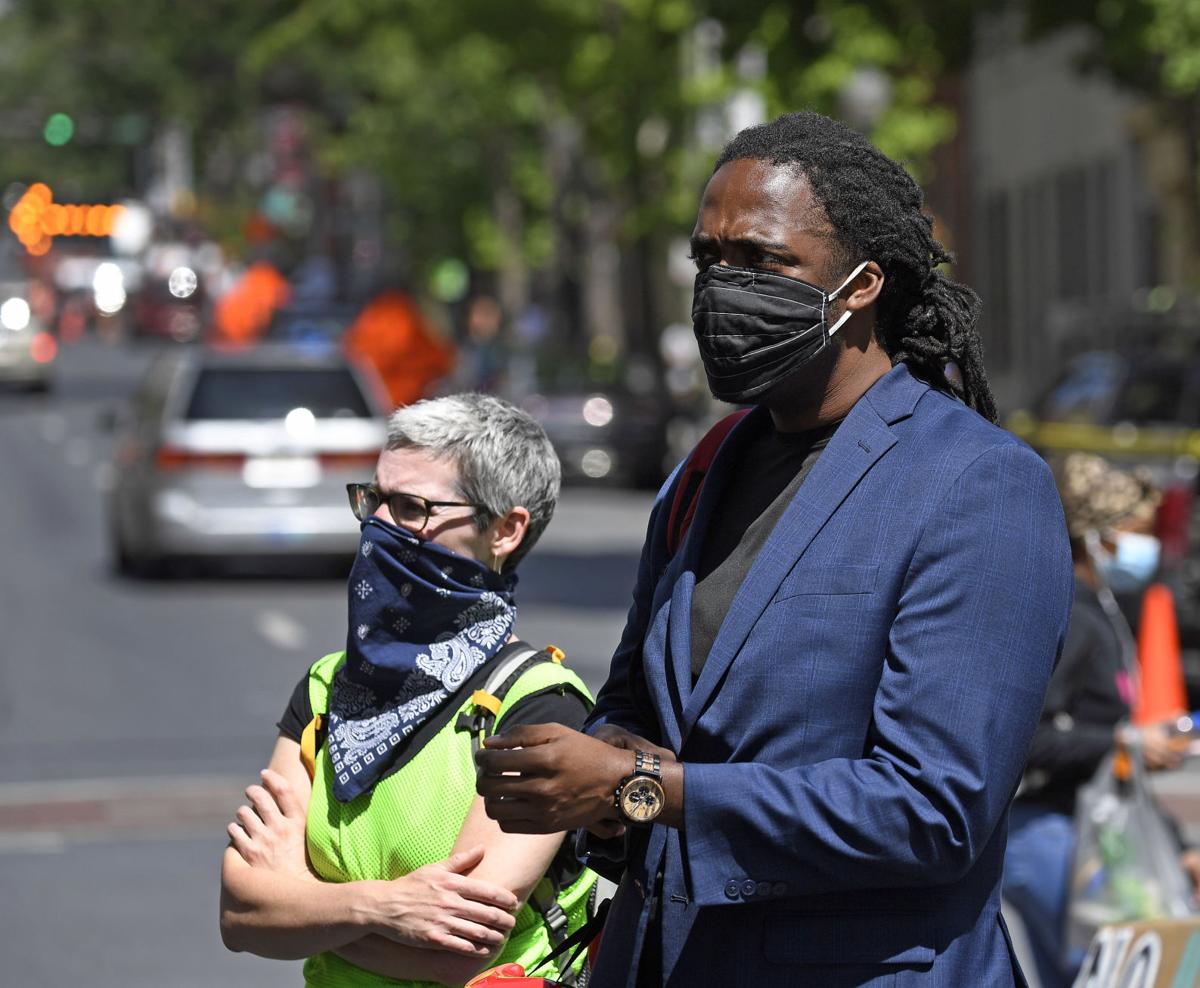 Lancaster City Couyncilman Ismail Smith-Wade-El, watches as protesters speak on the steps of the courthouse against police brutality and the treatment of George Floyd, in Lancaster Monday June 1, 2020.

Chief Jarrad Berkihiser also acknowledged that he can’t be sure if a group of outsiders who stirred up trouble Sunday were white nationalists, as he said on Monday. He suggested they could also have been anti-fascists or freelance agitators.

Berkihisier discussed those topics and others in an LNP | LancasterOnline virtual chat Tuesday joined by Lancaster Mayor Danene Sorace and the Rev. Roland Forbes, a member of the city’s community police working group. Suzanne Cassidy, opinion editor, led the discussion.

Berkihisier defended the use of pepper spray as a necessary use of force Sunday when protesters converged on officers making arrests. Six people were taken into custody. One was arrested Saturday, and another Monday. Pepper spray was not used on those arrested, the chief said.

As protesters converged, officers didn’t know their intentions, particularly because some were throwing objects, Berkihiser said. Police used the stinging eye irritant to move the crowd back.

“It is not a surgical tool,” Berkihiser said. “We squirt it in the direction of the people that are approaching, converging on the officers. Unfortunately, there are people that are going to get residual effects from the cloud.”

He said body camera footage will be reviewed and disciplinary action taken against any officer violating department policy.

Berkihiser said his department is working with federal and state law enforcement agencies to identify armed, outside agitators from videos and photos “to see if they’re either part of antifa (a militant anti-fascist movement) or a white national group.”

“That could be just somebody who lives out in the suburbs and decided this is a great chance … to come in and create mayhem,” the chief said. “We may never identify them as a member of a group.”

The phrase has become a rallying cry for pro-gun activists, white nationalists and the alt right, a group that emphasizes protecting the white race.

“That’s not to say that the presence of that tattoo is immediately to say that this person is a white nationalist,” Smith-Wade-El said. “But the presence of the ‘Don’t tread on me’ gear and other paraphernalia, with some fairly unusual and erratic behavior on the part of some of these guys, left a number of us worried that they were not present” to protest police brutality.

Mayor Sorace said that when she arrived at the protest in the middle of the afternoon Sunday, she believed her role was “to get our police out.”

Berkihiser said the platoon lieutenant requested assistance from the state police and municipal police departments, and those units wore helmets and had shields and batons in case they needed to protect city officers who weren’t in riot gear.

Berkihiser said the protest had no clear leader who police could talk to in trying to de-escalate the tension. That’s why the mayor, council members and pastors were called in to talk to people in the crowd.

“As soon as that started happening, then I pulled police officers back,” the chief said. “At that point I was the scene commander.”

Sorace called it “very disconcerting” to have outside officers come into the city.

Berkihiser said the driver of a SUV that almost hit several protesters Monday night was interviewed and an investigation was continuing. Video footage was being reviewed, and the district attorney may be asked to review what charges the evidence supports.

A racial bias consultant, who has been working to help keep the protests safe, has said he recognized the driver as someone who caused problems earlier in the day.

Berkihiser said that incident and the discovery of two crude explosive devices near city hall Saturday night were under investigation.

Sorace said how police interact with people of color needs to be a conversation across the county, state and country.

She said the city has much work to do, including recruiting officers who reflect the city’s diversity.

The mayor also called on employers to follow the city’s lead and grant job interviews to people before checking their criminal history. She asked landlords to improve their properties, and she asked consumers to patronize minority-owned businesses.

“Where are our other elected officials stepping out and talking about racial equity as a priority?” Sorace asked.

Sorace, who is white, said “people who look like me” have got to “start calling out” racial profiling by police, retailers, bankers and others.

“It’s frightening to have to go into another municipality and feel as though you’re out of place, you’re sticking out like a sore thumb,” said pastor Forbes, who is black. He recounted instances outside of the city in which he was pulled over and humiliated.

Berkihiser seemed to fight back tears as he talked about how he and colleagues want to institute change, but dialogue with the community is difficult to sustain.

“If we’re not sitting down at the table on a regular basis, both sides committed, it’s never going to change,” he said. “It’s really hard to be … mad at people when you really know them, when you know what’s in their heart.

“The only way that’s going to happen is if we sit at the same table and we talk to each other,” he said.

“My biggest concern is losing my city,” the chief said, becoming emotional. “And I’m going to do my damnedest to make sure that doesn’t happen.”

On the sixth day of protests in Lancaster city, conversations centered around the cause.

Use of pepper spray on demonstrators was 'by the book,' but 'book needs to be rewritten': Lancaster police chief

Lancaster city police did things pretty much “by the book” when they used pepper spray on demonstrators back on the last weekend of May. That …