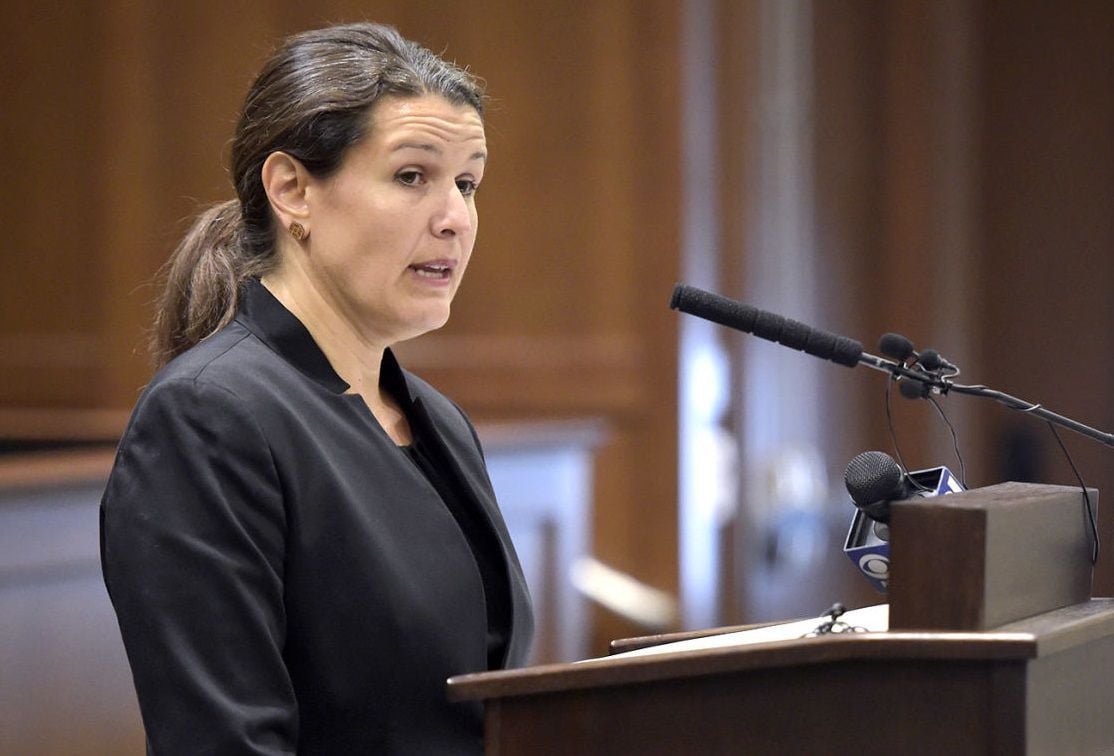 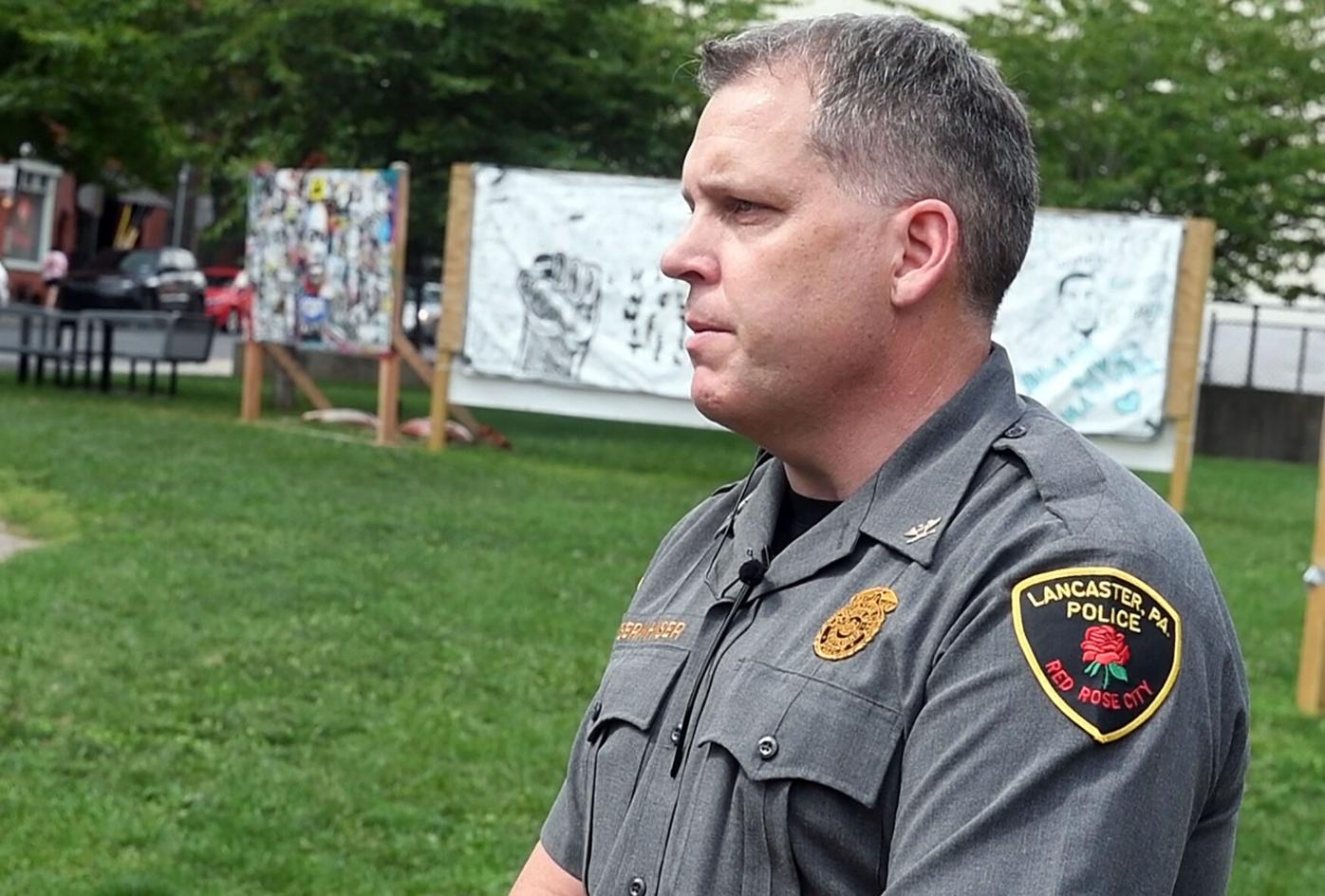 Lancaster Mayor Danene Sorace said she and police Chief Jarrad Berkihiser negotiated his retirement because she came to doubt he shared her vision for the direction of the police department following the death of George Floyd.

While not addressing it directly, Sorace's statement — released late Thursday afternoon — refutes claims made by Berkihiser's wife on social media and the Fraternal Order of Police that Berkihiser was forced to retire because of a pro-Trump Facebook posting.

"... I had many many discussions with Chief Berkihiser about racial equity, policing, and the ways in which Lancaster city could continue to lead the way as it related to progressive policing as in the county and the region," Sorace said in a video statement released Thursday afternoon.

"These discussions over a period of over more than four months led me to doubt that Chief Berkihiser truly shared my vision for the direction of the city’s Bureau of Police with the same passion and conviction that I have."

Berkihiser said he saw Sorace's statement, but declined comment until speaking with his attorney.

Sorace said she was able to comment on the reason for Berkihiser's retirement — after previously saying she was prevented from doing so because of a confidentiality clause as part of the separation agreement — because LNP | LancasterOnline obtained the agreement through a right to know request. She announced Berkihiser's retirement Oct. 2 during a brief news conference at which he was not present.

"As mayor, it is my responsibility to insure that the executive team I have formed is closely aligned with the goals I have set for our city. City residents, our constituents, should expect nothing less. Ultimately my doubts about Chief Berkihiser's alignment with my vision resulted in our negotiating a separation agreement."

City Council President Ismail Smith-Wade-El said, "As president of city council, I support a progressive approach to public safety, and applaud the mayor for her commitments to that. We're at a point, as a city, where we have to take the next steps on policing, and the mayor has my support in taking those steps."
John Fiorill, the Lancaster County Fraternal Order of Police’s immediate past president, said Sorace's were surprising and ironic.
"No one worked as hard to effectuate efforts to move the department forward and address the mayor’s concerns than Chief Berkihiser. We view this ironic, with all of the advances the chief made in a short period of time — four months — as an example of exceptional leadership," he said in an emailed statement.
It was unrealistic, he said, to expect that a department the size of Lancaster's could meet the administration's goals in a short time. The department has about 145 sworn officers and 80 support staff.
And there's no documentation or criticism indicating Sorace's displeasure, he said.
The FOP "stands behind its belief that the actions of the mayor and her inner circle was motivated by the comment made by his wife In support of President Donald Trump," he said.

According to the settlement agreement, Berkihiser will receive more than $60,000 from the city when his retirement officially begins on Oct. 31. He will be paid severance of $32,665 — the equivalent of three months of his base salary, plus longevity pay. His salary this year was budgeted at $141,206.

Berkihiser will also be paid $28,615 for accrued and unused paid time off. Both amounts will be subject to federal, state and local taxes, and they do not include retirement benefits that he qualified for over his 26 years of employment by the city.

The agreement, signed on behalf of the city by Sorace, includes a section addressing nondisparagement by either party.

The document also says the city will issue a positive letter of recommendation for Berkihiser.

Lancaster attorney Nina B. Shapiro briefly reviewed the separation agreement between Berkihiser and the city earlier Thursday, before Sorace made her statement. She has no involvement with either party and does not know Berkihiser or Sorace, she said.

She noted that the recommendation letter written for Berkihiser by the city was “certainly complimentary to him.”

Often, she said, such letters are “a lot more sterile,” with employers simply noting a person’s start and end date, position and salary.

It’s not just the recommendation part. What really hit me is ... there is specific language (in the agreement) where it said that he rose through the ranks, that he served to the best of his ability and that he never had any disciplinary issues,” Shapiro said. “People need to protect their reputation. I think that this shows there’s a sensitivity to keeping his reputation.” 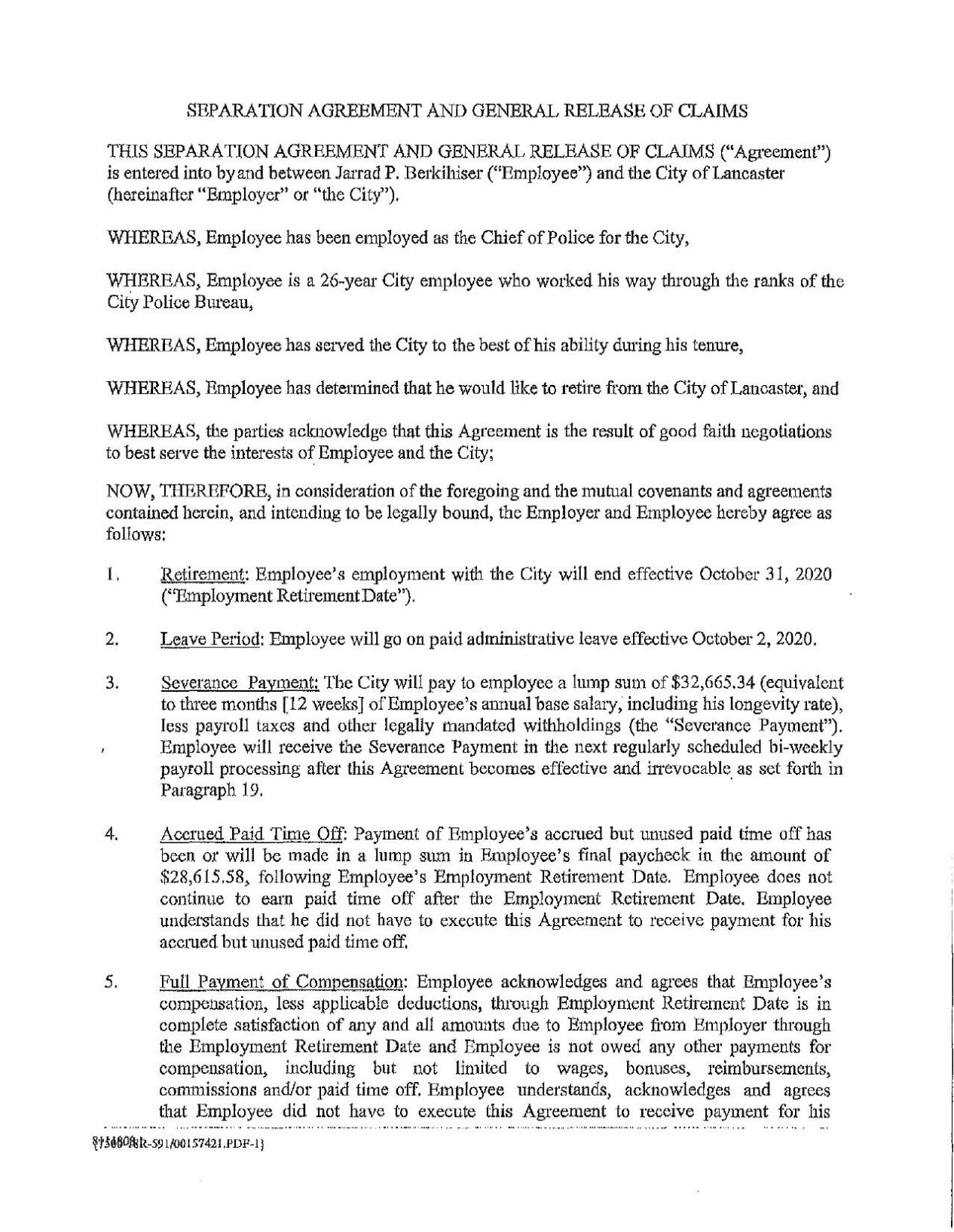 Lancaster city's police chief will retire at the end of the month, mayor says [update]

To whom it may concern, this letter confirms Jarrad Berkihiser was employed in the police department of the City of Lancaster until October 31, 2020. At the end of his career, he held the position of chief of police. During his employment, Berkihiser served diligently and was effective as a police officer. He followed orders and faithfully served as a police officer. He was not subjected to disciplinary action and did not violate department policies. He remained in good standing through the date of his retirement.

Man wanted for strangling woman, leaving her on side of the road in Conoy Twp.: police

Lancaster city residents and stakeholders will get a say in what characteristics they want in their next police chief, Mayor Danene Sorace tol…

Lancaster not 'defunding' police department in 2021 budget; 2nd social worker to be hired

Lancaster city is not planning to cut its police budget next year, despite a months-long campaign by activists locally and across the county t…

Lancaster mayor updates search for police chief; hopes to have hired May or June

Lancaster should have a permanent police chief hired around May or June, according to Mayor Danene Sorace.

Jarrad Berkihiser was pushed out of his job as chief of the Lancaster City Bureau of Police last fall, the result of a falling out with the ma…