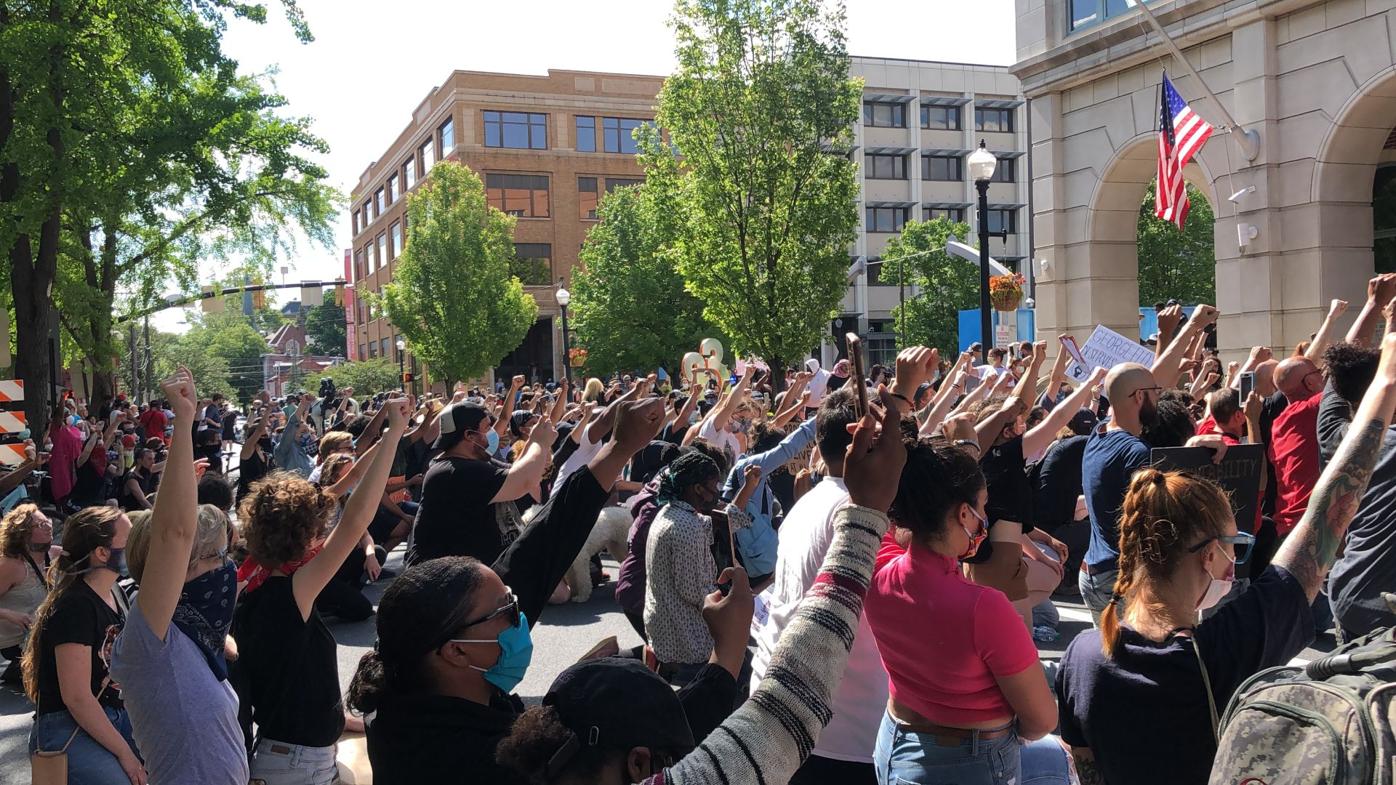 Protesters gather in front of the Lancaster Bureau of Police department in Lancaster city Sunday, May 31, following a vehicle protest earlier in the day. The demonstration was the second day of protesting in Lancaster following the death of George Floyd in Minneapolis last Monday. 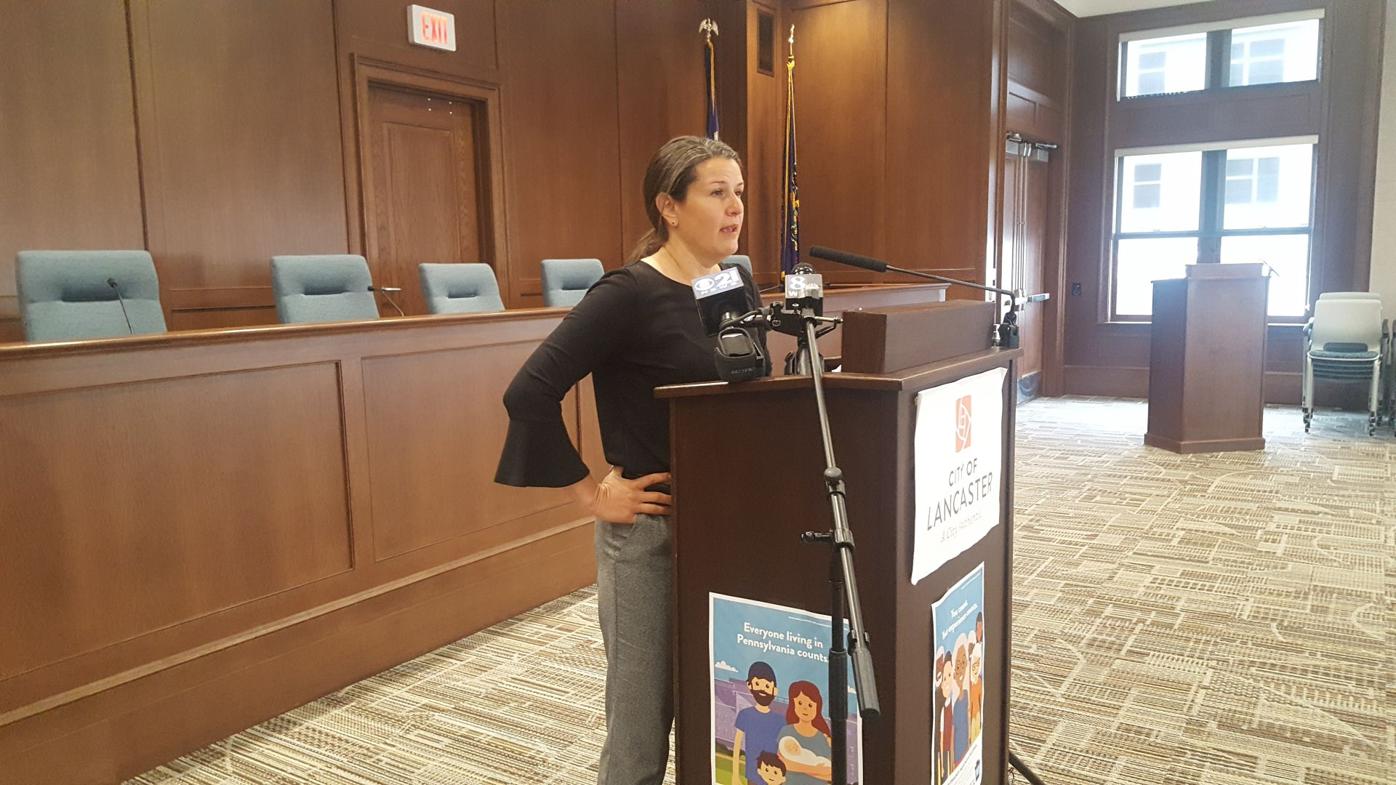 Protesters gather in front of the Lancaster Bureau of Police department in Lancaster city Sunday, May 31, following a vehicle protest earlier in the day. The demonstration was the second day of protesting in Lancaster following the death of George Floyd in Minneapolis last Monday.

Mayor Danene Sorace at a hurriedly called news conference asked local demonstrators to cancel protests because they could entice outside agitators to return and incite violence.

"We also saw definite evidence that we believe white nationalist groups were here," Berkihiser said. "Any time my officers were pelted with rocks or water bottles filled with cayenne pepper, it was coming from Caucasian individuals in the crowd."

There were between five and 15 agitators, all white men in their late 20s and early 30s, according to Sorace, who said a state police video system is being used to review footage and identify the agitators.

"This is not about silencing a movement," Sorace said. "This is about keeping people safe. We cannot let them win. We can not let them incite violence in our community."

"Our main concern right now," Berkihiser said, "are the agitators that are coming into the city and definitely trying to instigate additional violence between the group and police officers."

During the press conference, Sorace and Berkihiser said local protesters were planning to gather at 11 a.m. each day this week.

Dozens of protesters, in fact, gathered with signs late Monday morning on the sidewalk across the street from police headquarters in the first block of West Chestnut Street. They later marched across the city.

“The message we want to convey is stay home,” Sorace said. In an emotional plea, she particularly urged parents to not bring children to these protests.

Berkihiser said there were credible threats of arson Sunday against the police station, the courthouse and retail establishments. Individuals appeared to be scouting the police station grounds and surrounding area for places to inflict damage, he said.

Sorace said the outsiders were observed meeting at checkpoints, talking on phones, tracking people and standing near her.

"There was clearly an organized group of people that were not there for the cause that brought so many people safely together to peaceably demonstrate," the mayor said.

Berkihiser asked those who feel they must demonstrate to remain on sidewalks.

"We don’t want demonstrators coming into contact with motorists on the street because, now that we know we have outside groups here, I’m concerned for demonstrators being hit by cars," he said. "It’s been happening in other cities."

"This is my message," the mayor said. "I need you all to stay home. We need to make sure these that individuals who are trying to incite violence, who are bringing guns to peaceful protests, who are scouting and clearly organizing, that they don’t have the recipe that they need to incite violence in Lancaster city."

Xavier Garcia-Molina, the chair of the public safety committee on city council, said asking people to stay home is not an attempt to silence people with grievances.

"Black and brown people have been silenced enough," Garcia-Molina said at the news conference. "As a brown person … our lives need to be safe because the revolution is also for tomorrow."

Ismail Smith Wade-El, city council president, said that although people are hurting and desire change after the deadly police brutality captured on videotape in Minneapolis, "we also feel very explicitly the need to protect those members of our most vulnerable communities who came out yesterday."

"I grew up here. I have been exactly where you are," he said. "I need you to stay home if you can and stay safe so that you can stay in the fight because we need you."

The spectator, Todd Gusler, a pastor at a Mennonite church in Manheim Township, said he saw the pair smoking or vaping at a picnic table in the pocket park next to police headquarters and then stuffing their backpacks with water bottles.

The pair then crossed to the southeast corner of Chestnut and Prince streets.

Gusler said that a short time later police and protesters scuffled at the intersection, and water bottles were thrown toward the officers from the direction where he last saw the two men.

He said he did not see who threw the bottles.

After leaving the protest, Gusler said, he viewed LNP’s livestream of the protest.

He said that early in the protest, as people were still arriving, he recognized the young man in the A’s cap.

He said the video shows protesters staying on the sidewalk. But the young man in the cap places a barricade in the intersection to stop traffic and encourage protesters onto the street.

Someone else then removes the barricade.

Gusler said that before he left the protest, he spoke to Jess King, the mayor's chief of staff, about the men dressed in black, and she told him agitators were present.

The six are in addition to the single individual arrested at Saturday's protest.

Berkihiser said those arrested were processed Sunday night and released.

“The Pennsylvania National Guard is ready to provide safety and protection to our communities,” Maj. Gen. Anthony Carrelli, state adjutant general, said in a statement. “Our troops are trained to protect life, preserve property and ensure people’s right to peacefully demonstrate.”

Live updates: Arrests have been made at today's protests, police using pepper spray on protesters

The chief of Lancaster city police and several other officers joined protesters on their third day of demanding justice for George Floyd, a bl…

Temperatures will climb into the high-80s again on Wednesday, after a a cooler start to the week.

As Lancaster city and the nation continue to see protests over the May 25 killing of George Floyd, LNP | LancasterOnline Opinion Editor Suzann…

The phrase "molon labe" is Greek for "come and take them." Spartan King Leonidas used it to demand soldiers lay down their arms.

With arms stretching skyward, a man walked toward Lancaster city’s police station Tuesday evening carrying a brick in one hand.