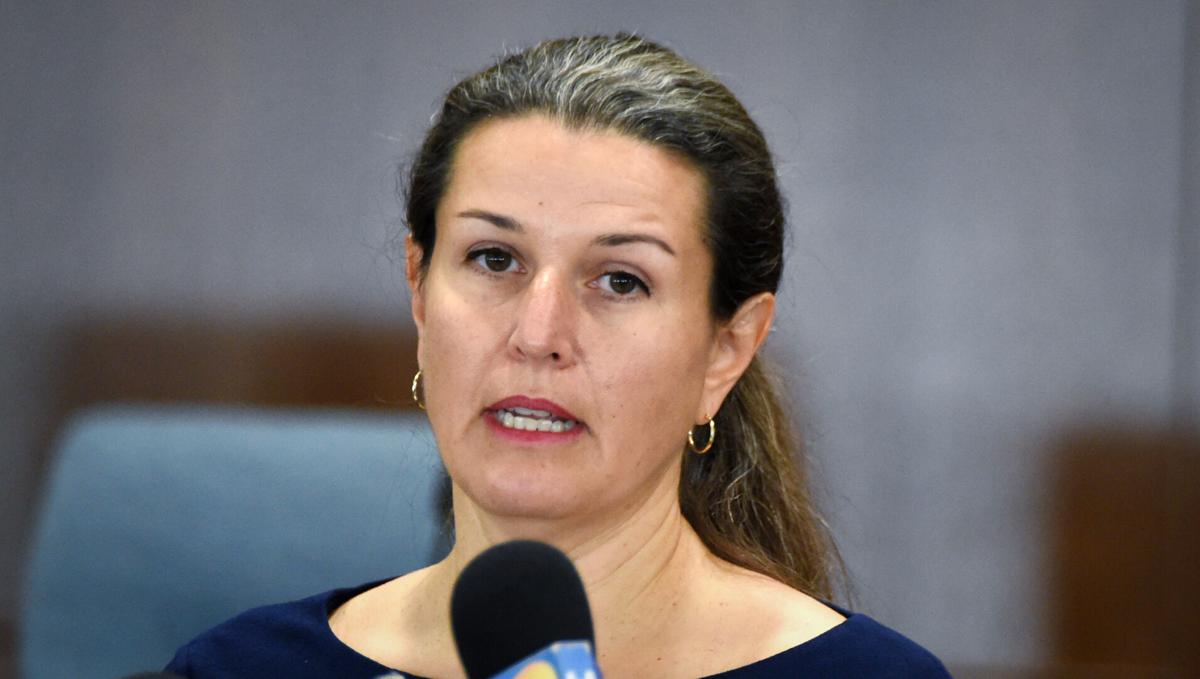 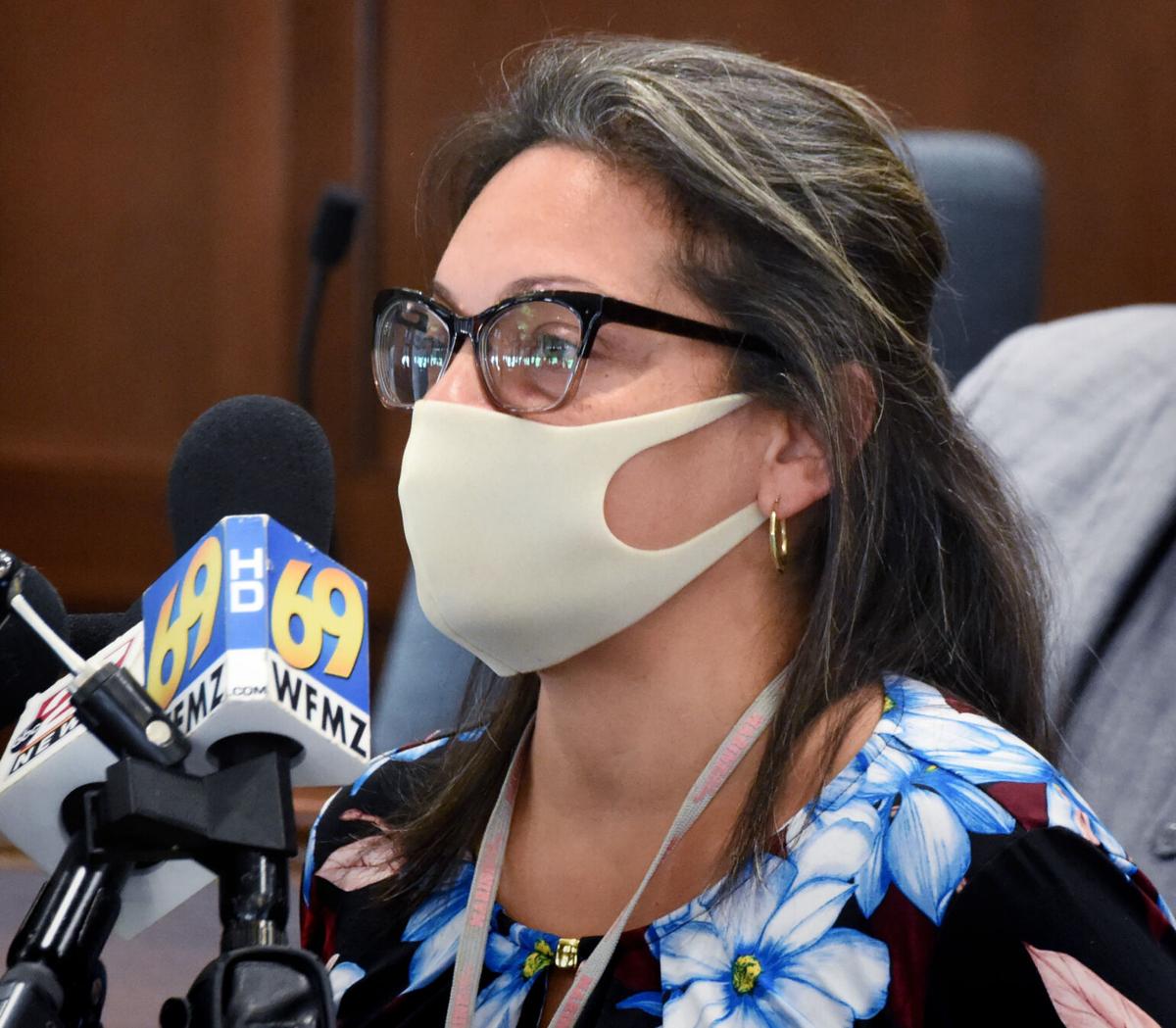 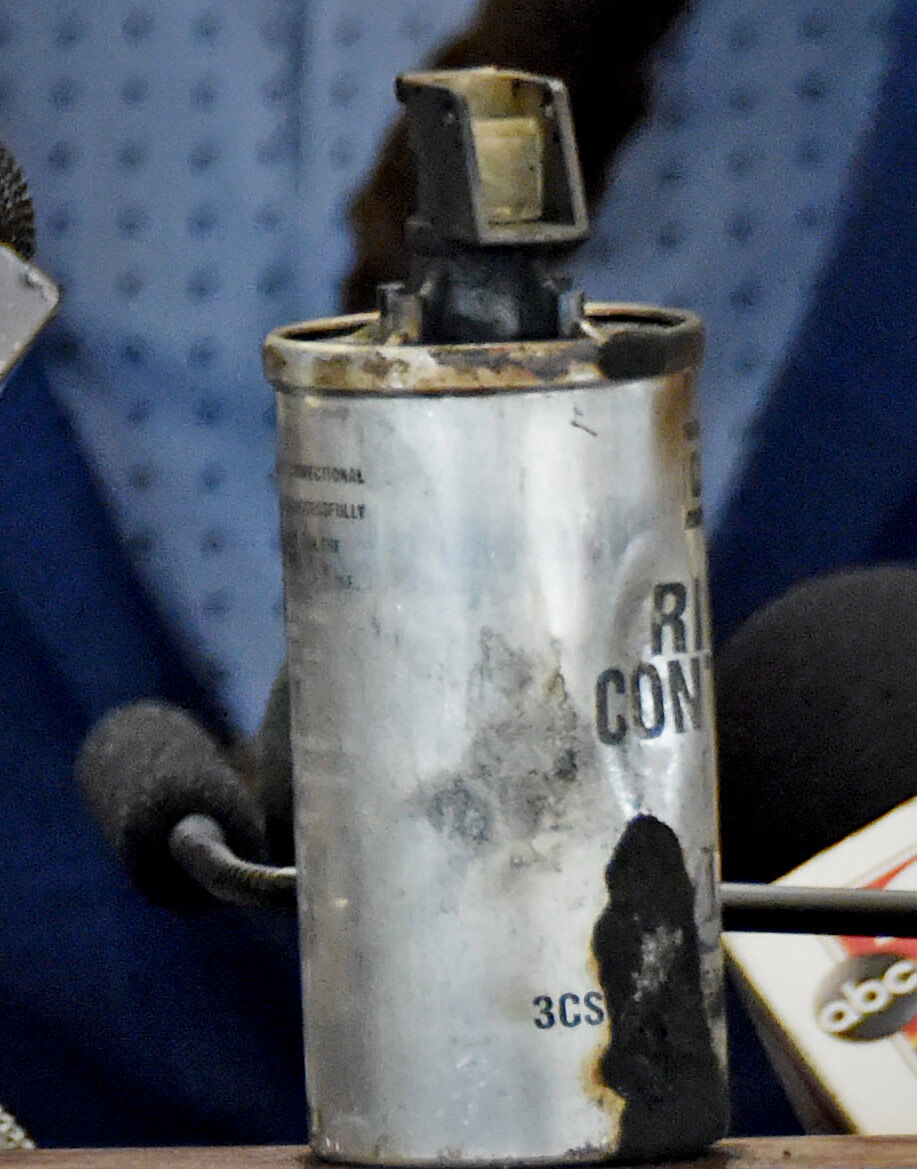 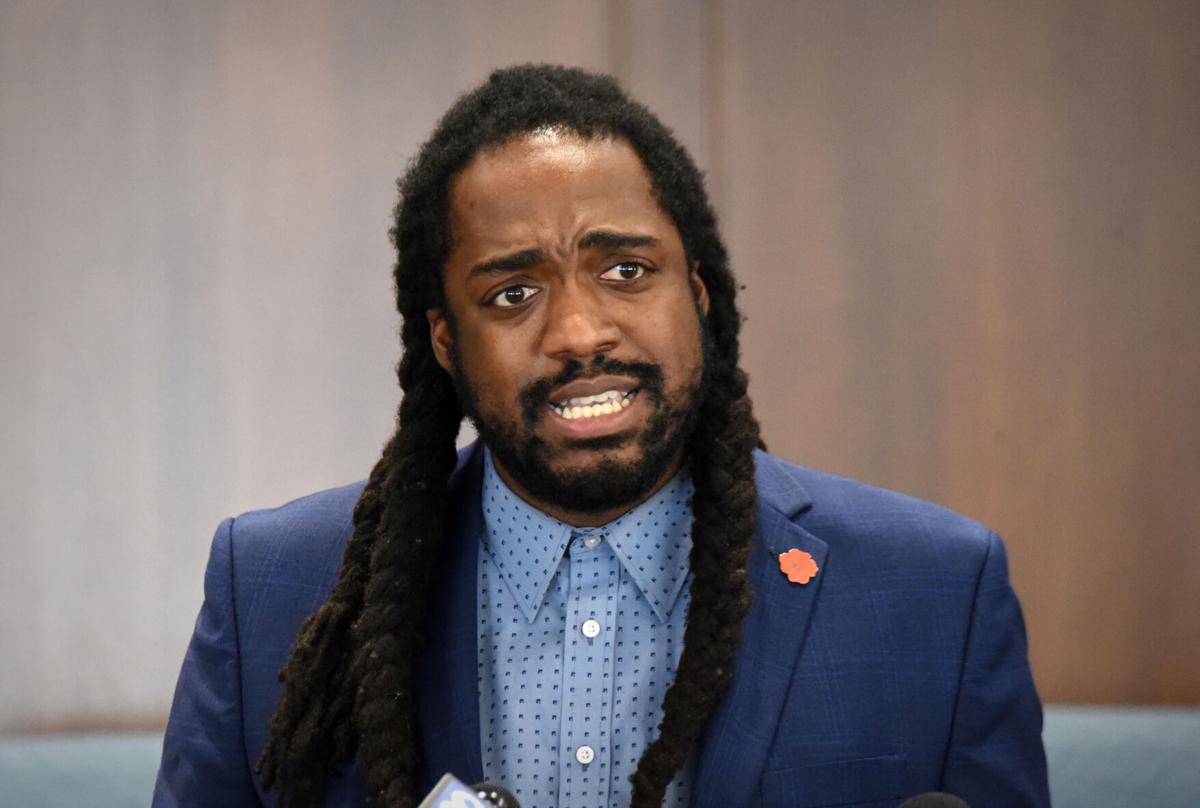 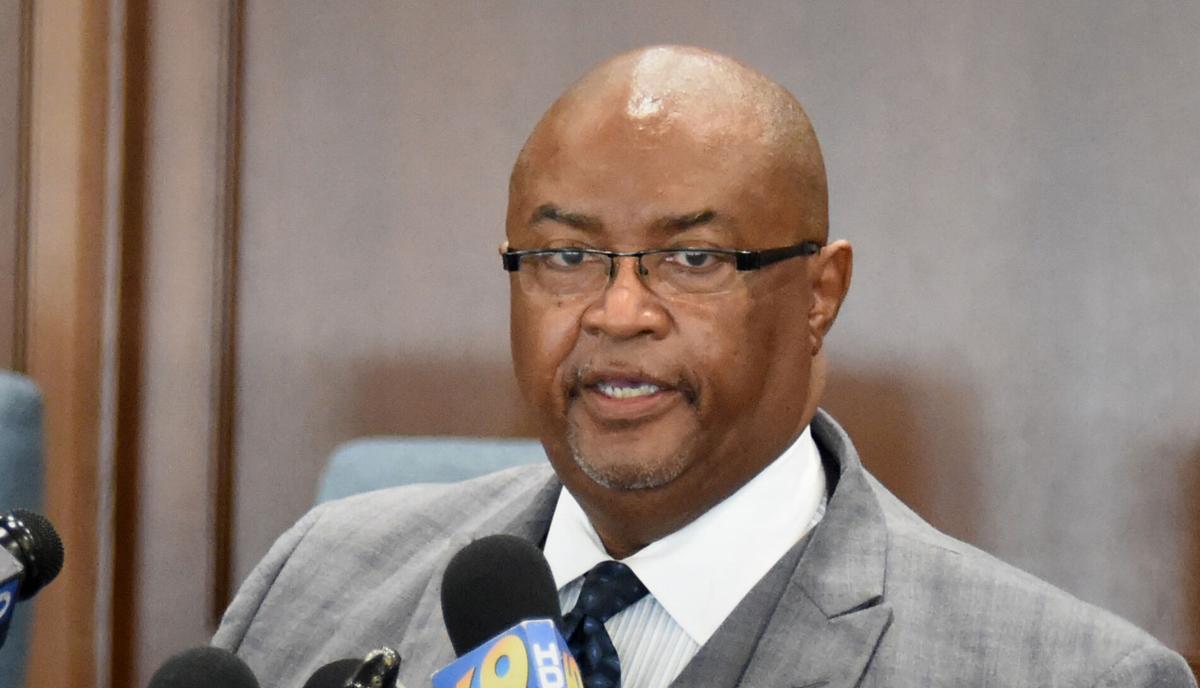 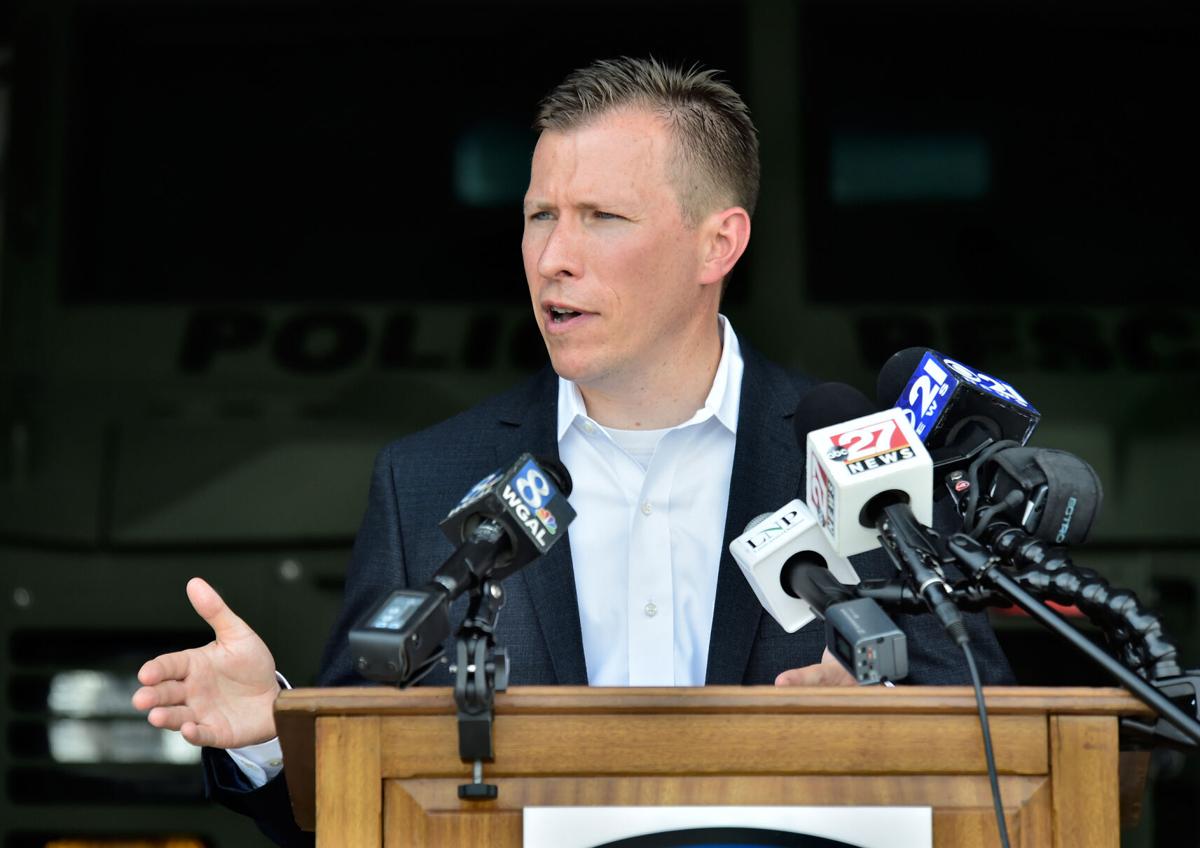 Lancaster County Commissioner Josh Parsons speaks about the pandemic Covid-19 and how things are going in Lancaster County at the Lancater County Public Safety Training Center on Thursday, July 30, 2020.

First mourning the death of a 27-year-old man killed by police, Lancaster city Mayor Danene Sorace pointed out what she described as failures in the state and county’s ability to offer mental health services.

“Right now, the only system that is in place for someone who has an emergency like what we saw yesterday is to call 911 and to wait for a police or ambulance dispatch,” Sorace said at a Monday press conference.

“At the same time, there has been more than a decade’s worth of cuts to state-funded and county-delivered behavioral health and human services,” the Democratic mayor said, calling for reform.

Her comments drew rebuke from Lancaster County’s two Republican commissioners, including Chairman Josh Parsons, who drew attention to the civil unrest that followed the fatal shooting of Ricardo Munoz in the 300 block of Laurel Street at 4:24 p.m. Sunday.

Police body camera footage shows Munoz holding what investigators said was a knife while exiting a home and running toward the officer, who was responding to a domestic dispute. The officer then shoots and kills Munoz.

Munoz’s sister, Rulennis, has since said her brother was mentally ill and hadn't been taking prescribed medication.

The incident later spurred protests and vandalism in city streets.

“I thought the press conference was going to be about the riot that caused significant property damage last night and what they are going to do to prevent it in the future,” he told LNP | LancasterOnline in an emailed statement. “Instead it was all about trying to deflect blame onto county and state government for some supposed policy failures — none of which I have ever once heard from the city leadership before today.”

That was before he called into question the working relationship between the city and county government.

“The revitalization of the city was a partnership of many people, organizations, and levels of government,” he wrote. “But it was all based on a shared partnership and a foundation of public safety. It is unfortunate the city leadership appears to no longer value that partnership.”

‘A horrible day for this city’

Sorace said she could not confirm whether the responding officer was aware of any of Munoz’s prior diagnoses. A Lancaster police spokesman referred all questions about the shooting to the Lancaster County District Attorney’s Office, which is investigating the incident.

It’s also unclear whether that officer was immediately aware of Munoz’s past criminal record, which included charges of aggravated assault stemming from a 2019 stabbing incident.

Either way, Sorace said she sees a need for change at all levels of government, including the county and state.

“Yesterday was a horrible day for this city,” Sorace said at the news conference.

City Council President Ismail Smith Wade-El also looked toward systemic change when speaking at the press conference, offering condolences for the Munoz family while encouraging locals to look past it, as well.

“If at all possible get outside of the conversation of last night,” he said, advocating for reform. “Could we be in a different place?”

The night before, Smith Wade-El spoke to an LNP | LancasterOnline reporter at the site of downtown protests, addressing the shooting directly.

“For the community here’s the question: ‘Was the gun the only option?’” he said, not giving his own opinion on whether he believes the shooting was justified.

Councilwoman Amanda Bakay expressed her feelings in a message she posted on her Facebook page at 9:10 p.m. Sunday.

“A family in our city has experienced a senseless tragedy,” she wrote. “De-escalation and non-lethal force, when necessary, should be used on police calls instead of making a split decision to end a life. If our officers are unable to do this, we must find a better way to handle these types of calls and allow professionals trained in mental health and peaceful de-escalation to take the lead.”

In a text message Monday, Councilwoman Janet Diaz said she will be keeping a close watch on the district attorney's investigation.

“Peaceful protest plays an important role in our democracy, but destroying our own community does not,” she said before offering condolences to Munoz’s family.

Parson had a suggestion for city officials.

“How about instead we all support the good cops on the street so they can do their job safety,” he said in his statement. “For months the county has been requesting the city police be allowed to do their jobs and enforce the law, including earlier incidents of lawlessness. Last night that lawlessness got totally out of control.”

“If the city, or any municipality in the county, desires to have a conversation regarding county-wide services and collaboration, we have been and continue to be open to such discussions,” he said in a separate statement. “It was also very troubling to see the destructive unrest as a result of the incident. There should be no place for such actions, especially Lancaster which is known as a place where we come together in a spirit of collaboration and cooperation to solve issues and help one another.”

There were indications that some of the protesters were from outside of the city, said Smith Wade-El, who as he spoke at the press conference displayed a spent gas canister used to disperse crowds.

Smith Wade-El’s comments about out-of-town demonstrators was backed by Delia Sanchez, who suggested that the misbehavior could have been exacerbated by rumors spread on social media.

Sanchez, who also spoke at the press conference, is a member of the Community & Police Working Group, which was formed in the summer of 2018, after a video depicting a city police officer’s use of a stun gun on an unarmed, seated man went viral online and drew widespread criticism and prompted a federal civil lawsuit.

“We are asking all of those that are protesting to please protest peacefully,” he said.

Officials at the local district attorney’s office said acts of “violence and destruction” will not be tolerated and vandals will be charged.

“The acts committed overnight were not peaceful acts of protest; the behavior was violent and riotous,” the district attorney’s office said in a statement.

“Numerous buildings and vehicles were damaged, fires were set — all without regard for the owners and individuals who could have been physically harmed by the riotous actions,” the statement said.

Lancaster city councilman Xavier Garcia-Molina summed up his feelings about the past 24 hours in the city in three words.

Garcia-Molina, who spent Sunday evening visiting with Munoz’s family, said he understands how frustration can lead to the type of destruction seen on Lancaster’s streets.

“It’s generations of trauma and frustration,” he said, speaking again about systematic failures that disproportionately impact people of color and those living in poverty. “You know first hand how systems fail you.”

Garcia-Molina made it clear that his sadness extends beyond just Munoz's death. It’s steeped in decades of systematic failures that keep marginalized communities from needed human resources while too often pushing them toward criminal records, he said.

And Garcia-Molina offered assurances that work toward reforms is ongoing within council chambers, including a push to expand the city’s police social worker program.

More in The coverage so far: Police shot, killed man in Lancaster city; the impacts, ruling and consequences (22 of 34)

Green Dreamz, a civil rights organization, is hosting a press conference outside of Lancaster County Prison on Wednesday afternoon.

Monday’s second night of protests near the Lancaster police station ended with a pair of arrests, with city police charging two men -- one of …

The day after Ricardo Munoz was shot and killed by a Lancaster police officer, triggering riots and arrests outside the police headquarters, M…