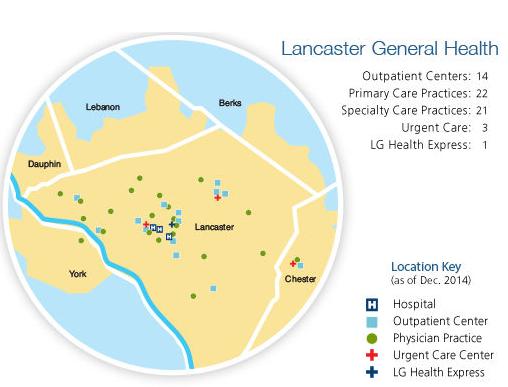 This overview of Lancaster General Health's operations is from the nonprofit's 2014 annual report. 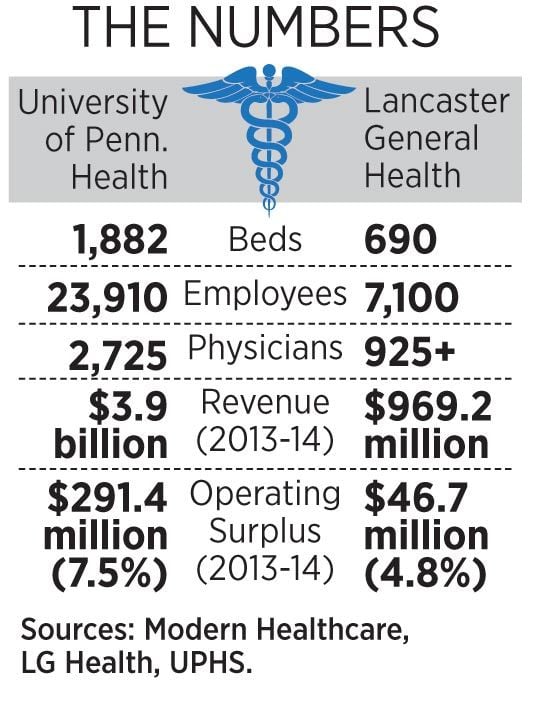 This overview of Lancaster General Health's operations is from the nonprofit's 2014 annual report.

Lancaster County’s largest health system has just one more hurdle to pass before it becomes part of much larger Philadelphia-based system: Regulatory approval.

Lancaster General Health and University of Pennsylvania Health System— which with the Perelman School of Medicine is known as Penn Medicine — announced this afternoon that they have reached a binding agreement.

The nonprofit organizations also provided specific details on the proposed deal for the first time.

As the deal stands, Lancaster's executive staff will remain in place under the plan, and Penn will take two seats on Lancaster's existing 14-member board.

That local board will continue to control issues including what happens to Lancaster's assets, medical staff and local investments.

"The money that Lancaster General has will continue to remain on its balance sheet and be used in this community," Beeman said.

Asked if Lancaster will continue to make payments in lieu of taxes, he said yes, those decisions will all remain at the local board level and the trustees intend to fully commit to continuing those payments on at least the same level as it has been making them.

"I don't want to say higher on television, but we'll certainly continue evaluate the payments," he said.

Lancaster will also have representation on Penn's board, Beeman said. Powers reserved for that board include approval of any new debt that would impact Penn's bond rating, appointment of Lancaster's CEO in consultation with the local board, and final approval of the Lancaster board chair.

Beeman said if the deal has an impact on the number of jobs LG Health supports here, he expects it to be a positive one. For example, he said, although it's "a very large university," Penn does not have an allied health sciences school -- but LG Health has the Pennsylvania College of Health Sciences, which might be able to complement Penn's educational offerings.

"We would expect to continue to grow our footprint here," he said. "We're certainly looking at some of the land that we have and hoping that Penn will look at that land as opportunity that we can co-develop to serve with both research and teaching and our needs in the community."

That land includes the Northwest Gateway -- LG Health's longtime “brownfield” project with Franklin & Marshall College along Harrisburg Avenue -- as well as a large tract at Routes 222 and 322 in West Earl Township where LG Health once considered building a hospital, Beeman said.

The deal now goes to the Federal Trade Commission and the Pennsylvania Attorney General's office, which are charged with protecting consumers' interests by enforcing antitrust laws and preserving competitive marketplaces.

LG Health, long a member of the Penn Cancer Network, in February 2014 entered a strategic alliance with Penn Medicine in which the systems sought ways to collaborate on care in the areas of trauma, cardiovascular care, genetics, neuroscience and other specialties.

In October 2014 the organizations announced that they were considering "a consolidated relationship" in which LG Health would become part of Penn Medicine. LG Health President and CEO Thomas Beeman said then that in addition to integrating numerous areas of patient care, the proposed deal would also be focused on integrating teaching and research efforts.

Penn Medicine has four hospitals — Hospital of the University of Pennsylvania, Penn Presbyterian Medical Center, Chester County Hospital and Pennsylvania Hospital — as well as the Perelman School of Medicine.

The proposal comes at a time of unprecedented merger and acquisition activity in health care market, with providers across the country citing changing market conditions under the Affordable Care Act as a major impetus for forging new relationships.

Heather Stauffer covers the health care industry. She can be reached at hstauffer@lnpnews.com or 717-481-6022.

More in Lancaster General Health Merger With the University of Pennsylvania Health System: Everything You Need to Know (3 of 30)

Do you support or oppose the merger of Lancaster General Health and the University of Pennsylvania Health System?