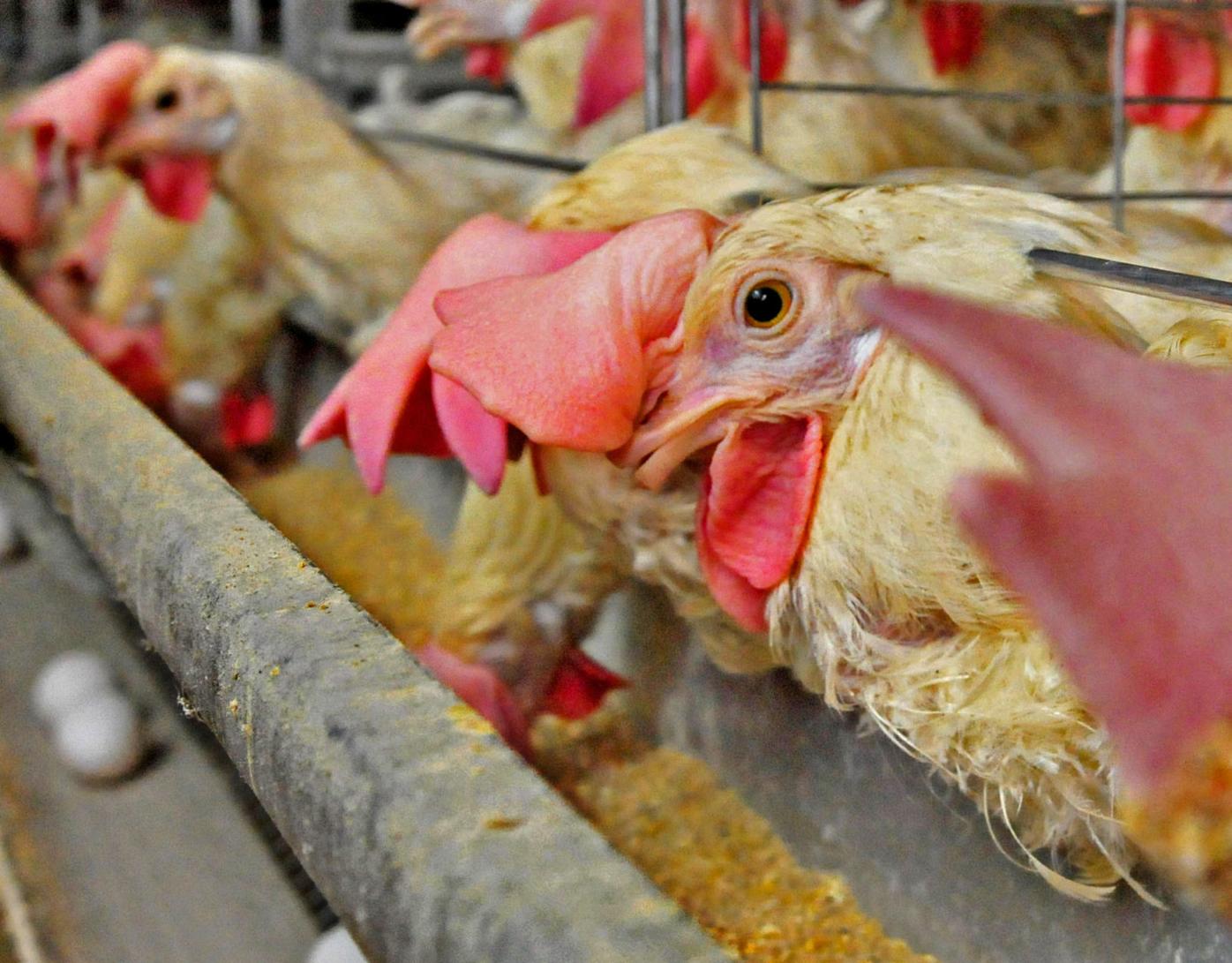 In this file photo from 2009, hens at a Lancaster County poultry operation chow down as their eggs move along a conveyor belt. 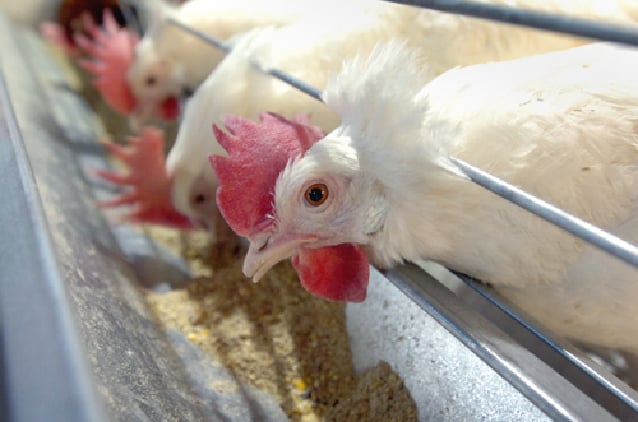 Chickens stick their heads out of a pen as to feed from a trough at the Farm Show on Jan 10, 2008. (Deb Grove / Intelligencer Journal)

Lancaster County contributes more poultry-related nitrogen pollution to the Chesapeake Bay than any other county in its six-state watershed.

That’s according to a report published this week by D.C.-based environmentalists at the Environmental Integrity Project, who highlighted concerns about manure-based fertilizer and air emissions.

It’s pollution that contributes to low-oxygen “dead zones” in the bay that can kill fish, crabs and other wildlife, they’ve said.

“There is much work yet to do,” said Coordinator Allyson Gibson, with Lancaster Clean Water Partners. “But our communities have made incredible strides towards reducing water pollution and we stand by their current and future efforts.”

The report looked at nitrogen pollution in 2018, listing Pennsylvania, at 10 million pounds, as the top poultry-related polluter in the 64,000-square-mile watershed.

And of all counties in the watershed, Lancaster was listed as the top poultry-related polluter with 3.3 million pounds in 2018 — about 14 % of the total 24,032,297 pounds of related nitrogen in the entire bay watershed in 2018, according to the report.

The report took into account nutrient-laden runoff from farms on which chicken manure is spread, as well as ammonia emissions from industrial-scale chicken houses, which break down into nitrogen and contribute to the pollution load, the report said.

The majority of Lancaster County’s poultry-related pollution stemmed from manure runoff, which contributed about 2,358,676 pounds of nitrogen in 2018. Another 955,417 pounds was attributable to ammonia emissions, according to the report, which cited data from the U.S. Department of Agriculture and the Chesapeake Bay Program.

Within the report, its authors claim government officials, including at the U.S. Environmental Protection Agency, have failed to properly monitor and regulate emissions.

The environmentalists offered a list of recommendations, including forcing poultry companies to install more effective pollution control systems and to pay for tree planting as a way to catch and reduce ammonia emissions. They also call for stricter oversight by regulators — a measure officials at the Chesapeake Bay Foundation seemed to support.

“We are encouraging farmers, poultry industry leaders, and regulators to work together to better understand the significance of this source of pollution and find ways to reduce it,” said Beth McGee, the foundation’s Director of Science and Agricultural Policy. “The poultry industry continues to grow and if nothing is done the pollution created by these operations will grow with it.”

However, Liam D. Migdail, with the Pennsylvania Farm Bureau, pointed out that manure application already is regulated, and “many farms already plant fast-growing trees along property lines to reduce odor impacts on neighbors.”

A number of stakeholders, including poultry company officials, were unable to comment specifically on the report, explaining they did not have time to digest the 50-page document.

That also was true for Rachel Felver at the Chesapeake Bay program, but still, she provided some insight into nitrogen’s effect on the bay.

And nutrient pollution also impacts local waterways. According to figures from Lancaster Clean Water Partners, about 50 percent of the county’s 1,499 miles of stream are considered impaired.

In fact, county residents and officials are required by federal mandate to reduce their annual nutrient pollution loads — nitrogen by 11.46 million pounds and phosphorus by 468,305 pounds — by 2025.

Lancaster County farmers, including those with poultry operations, must play a part in meeting those goals, experts said.

“Farmers in Lancaster County and across the state have implemented, and are continuing to implement, practices to protect water quality,” Migdail said.

Lancaster tops the list of 10 counties in the Chesapeake Bay watershed that contributed the most poultry nitrogen pollution to the bay in 2018. The first line under each county is nitrogen from ammonia air emissions, the second line is runoff of nitrogen from manure and the third line is the combined total.

Lancaster weather: The year of no winter

This is a painful time for restaurants and their employees; we're rooting for them [editorial]

Editor's note: This story will be updated. Check back in for the latest news.

Hoping to protect plantable soil while reducing waterway pollution, the state Department of Agriculture has made $2.5 million in grant funding…

A federal proposal could risk the health of residents in Lancaster County, and across the country, by allowing particle-related air pollution …

The sun beat down through a nearly cloudless sky as customers exited the air-conditioned comfort of their cars early Wednesday afternoon, choo…

A pair of tractors pulled wagons Wednesday morning, tugging more than two dozen passengers through cattle houses and past rows of corn on Brub…

Decades after historical segregation shaped the neighborhoods they live in, Black people and other people of color are still more likely to re…

Finding success in the fossil fuels industries, officials at Manor Township-based RETTEW decided about five years ago to dip their toes into r…

Poor air quality forecasted today in Lancaster County could pose a risk to the young, elderly and those with pre-existing respiratory issues.

Warmer, windier weather was expected to push stagnant, pollution-laden air out of Lancaster County by today, ending a two-day stretch in which…

Air pollution levels could be high Thursday in Lancaster County, posing a risk to sensitive groups and those with pre-existing respiratory illnesses.

Worried about mounting conservation mandates and their prohibitive costs, local stakeholders continue to raise concerns about the development …