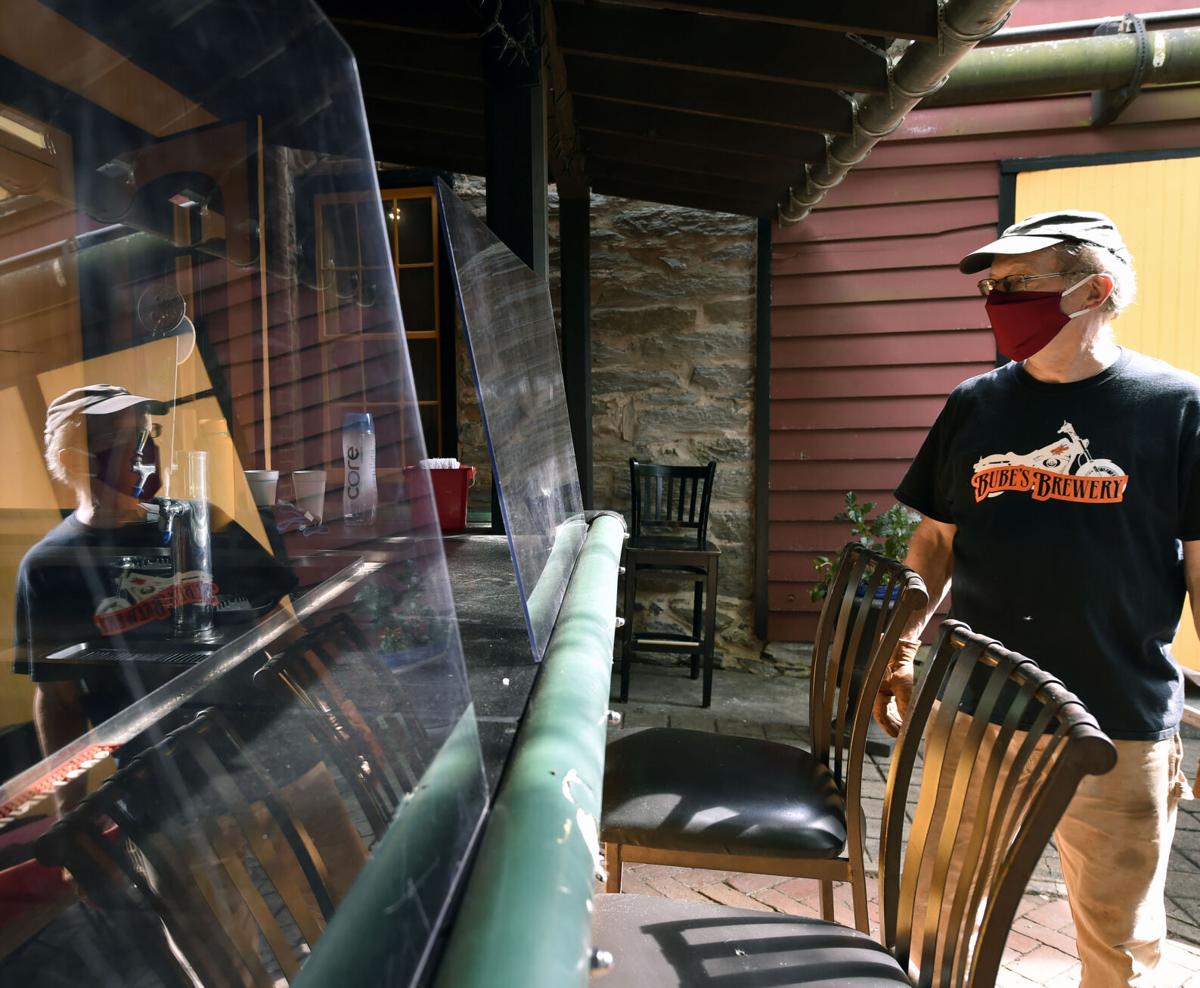 Owner Sam Allen, gets ready to mount plexiglass over the outside bar, as employees make some changes to its biergarten to get it ready for operating within the restrictions for outdoor dining, at Bube's Brewery in Mount Joy Tuesday June 2, 2020. 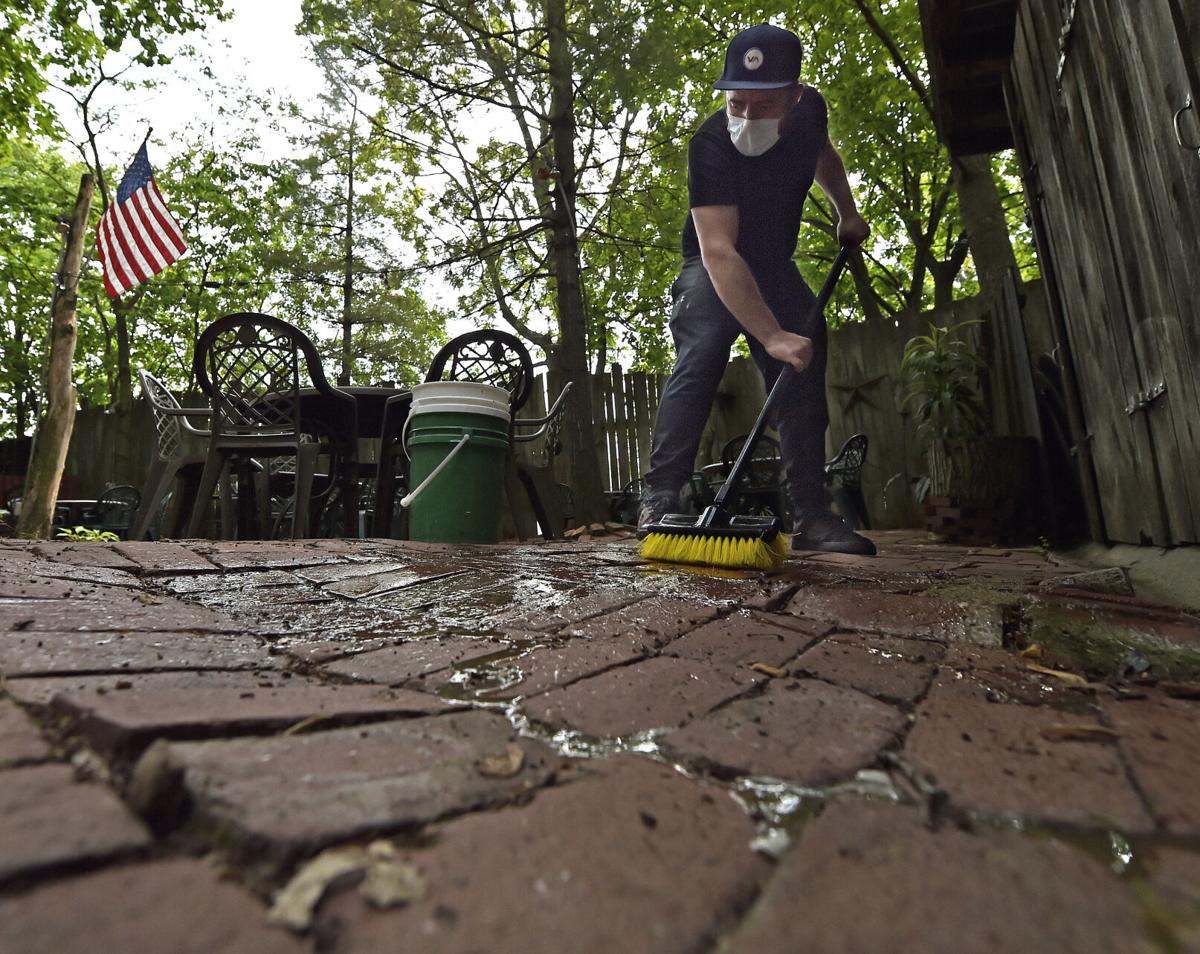 Tim Murphy, scrubs the brick pavers, as employees make some changes to its biergarten to get it ready for operating within the restrictions for outdoor dining, at Bube's Brewery in Mount Joy Tuesday June 2, 2020. 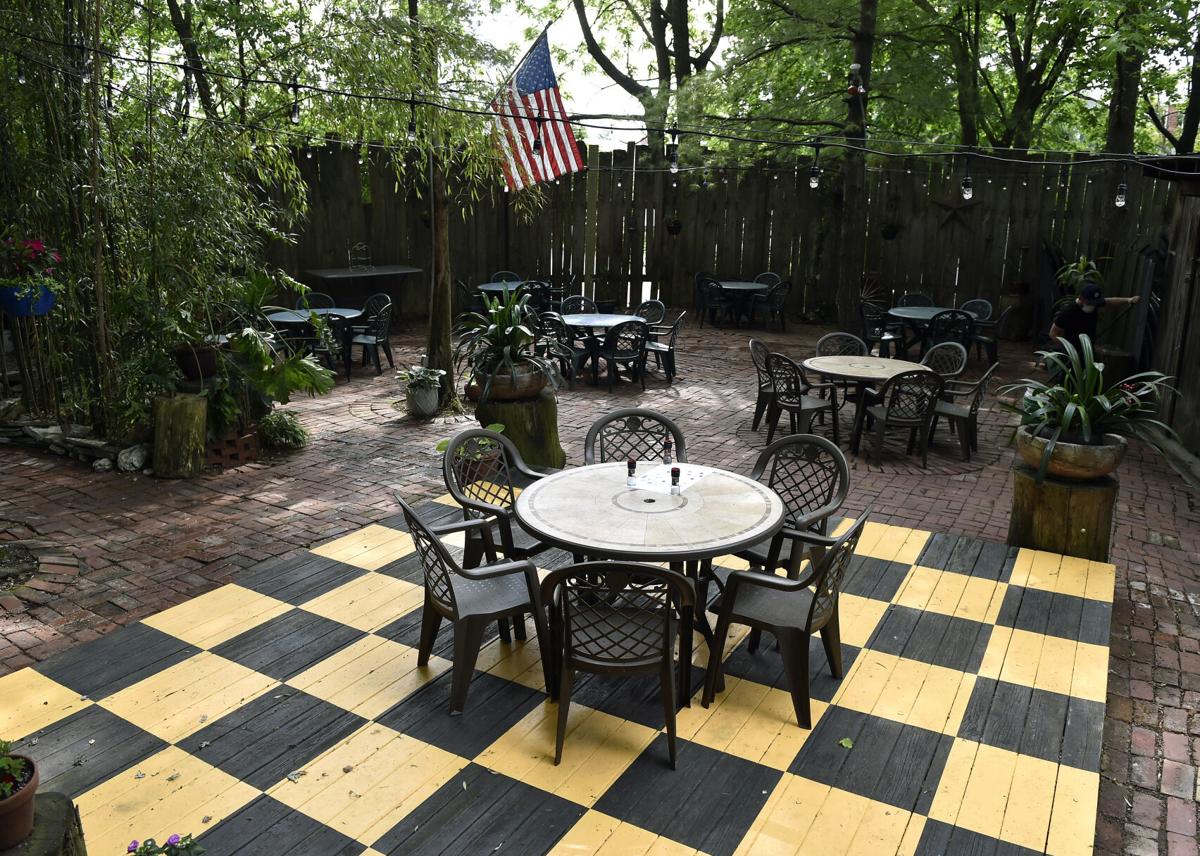 Tables have been measured for proper social distancing, as employees make some changes to its biergarten to get it ready for operating within the restrictions for outdoor dining, at Bube's Brewery in Mt. Joy Tuesday June 2, 2020. 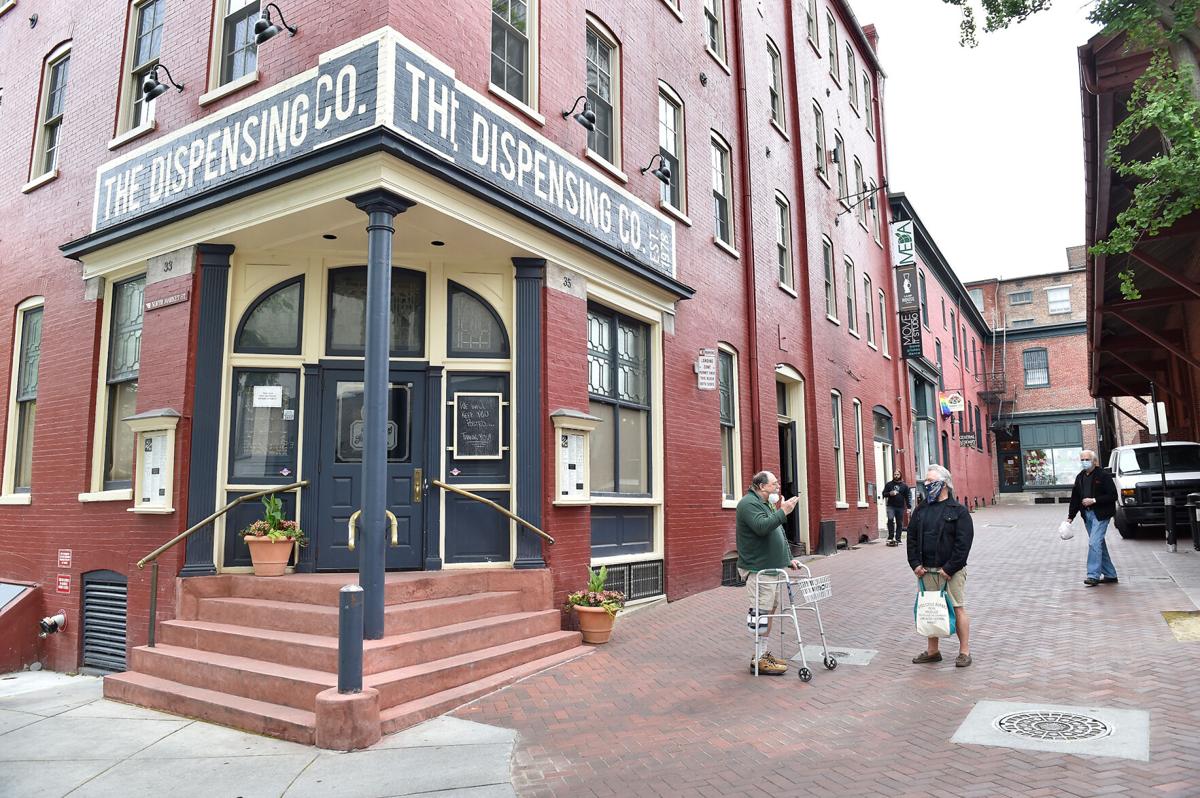 Bradley DeForge, co-owner of The Dispensing Company, left, is pictured talking with Jerry Hershey off the Grant Street alley where seating will be available on the sidewalk when Lancaster County is able to loosen some of our Covid-19 dining restrictions on Tuesday, June 2, 2020.

Owner Sam Allen, gets ready to mount plexiglass over the outside bar, as employees make some changes to its biergarten to get it ready for operating within the restrictions for outdoor dining, at Bube's Brewery in Mount Joy Tuesday June 2, 2020.

Tables have been measured for proper social distancing, as employees make some changes to its biergarten to get it ready for operating within the restrictions for outdoor dining, at Bube's Brewery in Mt. Joy Tuesday June 2, 2020.

Bradley DeForge, co-owner of The Dispensing Company, left, is pictured talking with Jerry Hershey off the Grant Street alley where seating will be available on the sidewalk when Lancaster County is able to loosen some of our Covid-19 dining restrictions on Tuesday, June 2, 2020.

After nearly three months of arms-length service through food and drink pickups and deliveries, restaurants around Lancaster County can finally begin serving customers in person Friday.

But as they plan for the restricted outdoor seating allowed during the “yellow phase” of Gov. Tom Wolf’s reopening guidelines, restaurant owners are grappling with how to make a pleasant and safe customer experience that can also boost their bottom lines.

Tables spaced 6-feet apart, masked servers, extra cleaning, slimmed-down menus, and time limits for dining are among the things customers can expect as restaurants try to operate efficiently while complying with the strict rules meant to limit the spread of COVID-19.

“It’s crazy times, but I want to be respectful to everyone,” said Leigh Lindsay, an owner of Zoetropolis Cinema Stillhouse in Lancaster. “We’re not going to make a ton of money off of this.”

At Zeotropolis, part of an initial greeting may include a phone number customers can use to text subsequent request to their server. While that might seem like overkill to some, Lindsay says she wants to accommodate customers who might prefer a more standoffish approach.

“People have to take their masks off to eat, and we don’t want to bug people,” she said.

Rules for social distancing mean bars and restaurants are taking extra steps to discourage the kinds of casual, impromptu interactions that make them community gathering places.

At Bube’s Brewery in Mount Joy, a cornhole game and a pool table will be removed from the biergarten to keep customers from doing anything but eating and drinking at tables. And at The Dutchmaid Deck in Ephrata, the covered outside bar will be off-limits to discourage customers from congregating.

While the experience will be different, Troy Minnich, said he expects The Dutchmaid Deck will be popular because people haven’t been able to go out to eat at a restaurant for so long.

“We’re anticipating that just because everything is going to be relaxed -- at least a little bit --that we’re going to be pretty busy,” said Minnich, who is one of five family owners of the restaurant.

Yet even as he is bracing for being busy, Minnich says losing half of the deck’s roughly 160 seats while needing to bring back staff to do additional cleaning means he’s not planning on making a lot of money while restrictions continue.

“Our sales are going to go down and our payroll is going to go up,” he said. “It’s obviously going to be a boost, but it’s not going to get us back to where we need to be.”

As restaurants with existing outdoor seating are tweaking them to comply with the new rules, others are planning to put new tables outside.

In Lancaster city, restaurants can apply now for special sidewalk cafe permits to allow additional outdoor seating beginning Friday. The application process has been expedited and fees are being waived under the ordinance city council is expected to adopt Friday morning.

The ordinance, which would allow liquor license holders to serve alcohol in more outdoor spaces, also includes the option for city officials to designate “public dining areas” where people could eat carryout meals from restaurants, and also drink alcohol.

Marshall Snively, president of the Lancaster City Alliance, has been working with restaurateurs and city officials on the outside dining ordinance which he expects will be a much-needed financial lift for struggling restaurants.

“Anything we can do now is going to be imperative to their future success,” he said.

As the city is encouraging al fresco dining by cutting red tape, the Pennsylvania Liquor Control Board is streamlining its own rules to make it easy to allow customers to drink alcohol in the new outdoor spaces.

“This is a very active and cooperative situation at this point,” said Bradley DeForge, an owner of Lancaster Dispensing Company who hopes to put 6 to 8 tables between his restaurant and the back of Lancaster Central Market.

DeForge said he is still waiting to hear how many tables he can have, and how many days they can be out, since that will determine whether it is worthwhile.

“It’s kind of a cumbersome process to move tables in and out just for a few hours a day,” said DeForge, who owns the restaurant with Judy Ross.

Around the corner from Dipco, Daniel Falcon is hopeful about being able to set up seating for 40 to 50 people on Market Street between Central Market and his Old San Juan Cuisine and Rum Bar in the Shops at Hager.

“It’ll be great as long as we got good weather. When the weather gets bad, you literally go to zero,” he said. “But it doesn’t rain every day.”

Lancaster County restaurants cope with shutdown orders, brace for 'new reality' when they can reopen

In 10 weeks, coronavirus has killed more Lancaster County residents than a year's worth of crashes, overdoses, suicides and homicides

How deadly has the coronavirus been in Lancaster County?

The Red Rose Film Festival will return for its second year, accurately dubbed "The Sequel," from Friday, Nov. 6 through Sunday, Nov. 8.

What major retailers are opening as Lancaster County moves to the ‘yellow’ phase?

With retail operations permitted as Lancaster County moves into the yellow phase Friday, shopping will resume at some major stores and outlet …

Editor's note: Tellus360 has announced that Friday's reopening for rooftop service has been postponed to Saturday at 4 p.m. due to the weather.

Here are the differences between the red, yellow, green stages of Gov. Wolf's plan to reopen the state [update]

Editor's note: This article was originally published April 23. On May 22 and May 27 Gov. Tom Wolf announced new guidelines for the phases. Thi…

At least 10 restaurants in Lancaster city can open new outdoor seating areas today with five others expected to join the list soon.

On the same day that Zoetropolis Cinema Stillhouse partially reopens for outdoor seating, the theatre has announced that it will offer three d…

Despite delays thanks to the COVID-19 pandemic, many of the area's swimming pools are starting to open their gates for the 2020 season.

These 11 Lancaster County municipalities are still partially or fully dry

Editor's note: This list accompanies a larger story about Akron becoming a "wet municipality." Click here to read that article.

Forced to survive through shutdowns, Lancaster County's small businesses get ready to rebound

Three months after severe restrictions on businesses went in place to slow the spread of COVID-19, economic activity is once again picking up.

To adhere to state guidelines, restaurants are requiring servers to wear masks at all times. Customers, however, are allowed to take off masks…

Are customers comfortable with dining out during COVID-19 in Lancaster County? Here's what they say

What’s it like to be dining out, as more Lancaster County restaurants open up indoor seating amid the COVID-19 pandemic?