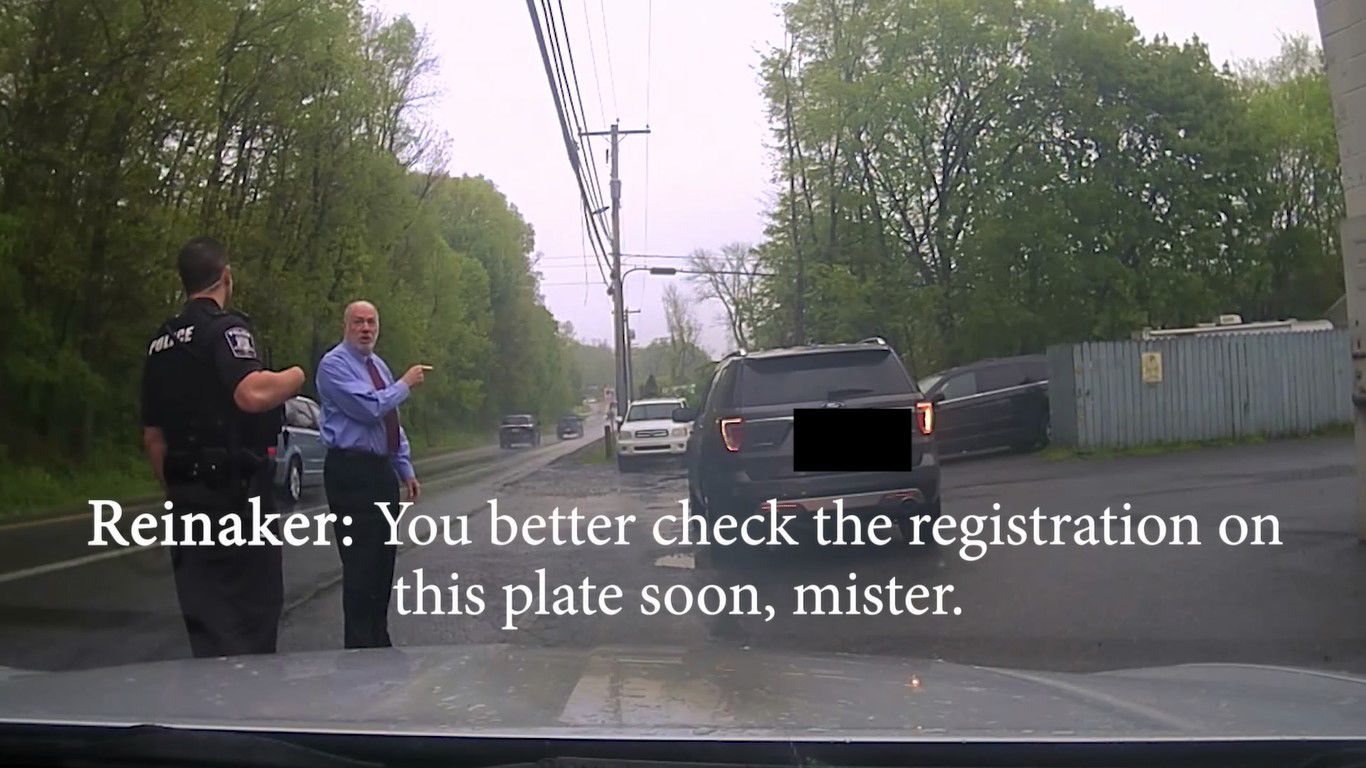 At a traffic stop on April 26 in East Lampeter Township, Lancaster County President Judge Dennis Reinaker exits his vehicle to confront the police officer over why he was stopped. The judge's actions during and since the incident have raised questions. 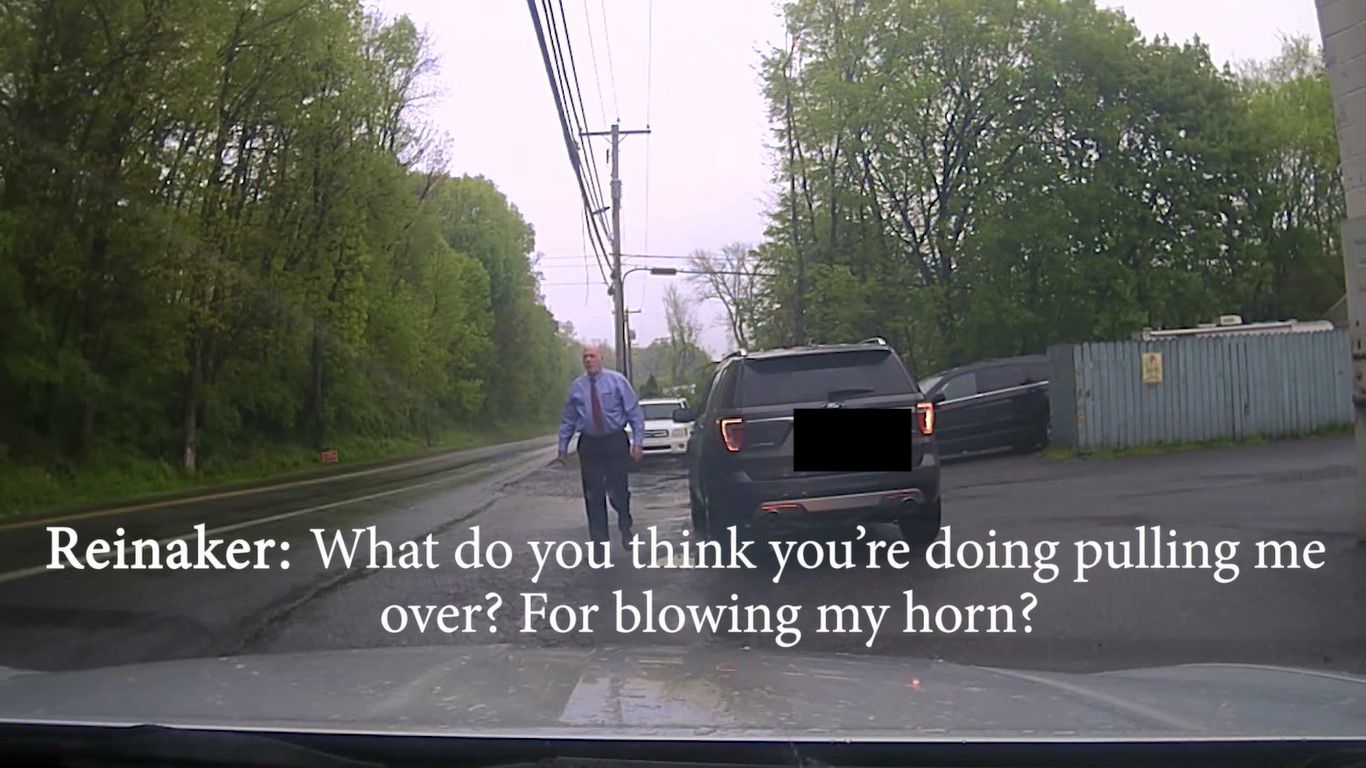 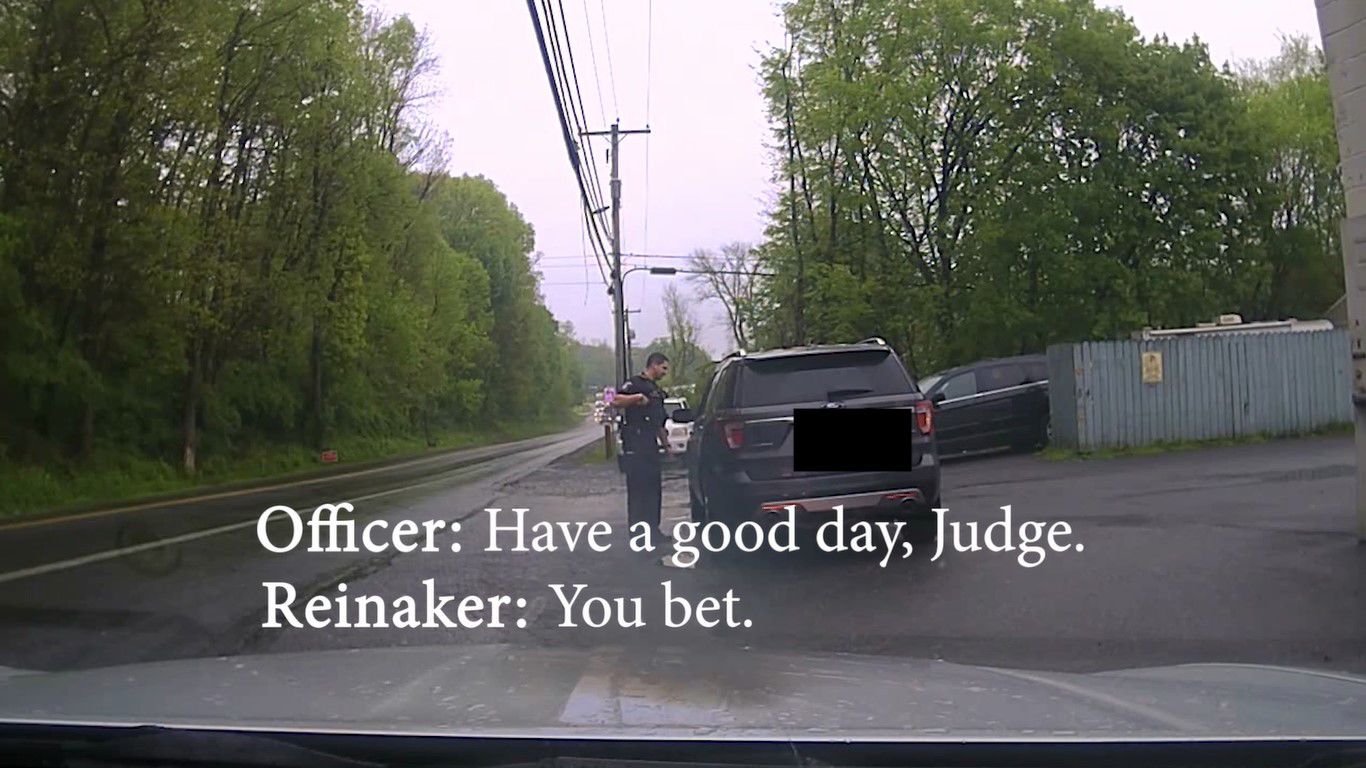 Lancaster County’s president judge confronted a police officer after being pulled over for tailgating and may have suggested his identity would make a difference to the officer, video obtained by LNP shows.

President Judge Dennis E. Reinaker acknowledged he was stopped in April by an East Lampeter Township police officer but, in a written statement to LNP, denied that he used his judicial position to alter the outcome of the traffic stop.

“I neither expect nor deserve any special treatment and made no such request on this occasion,” Reinaker said.

“The driver got out and was irritated,” Zerbe said in a phone interview. The chief said he had not seen the footage but was familiar with the incident.

“(The driver) wanted to bring to the officer’s attention who he had stopped,” Zerbe said.

The Pennsylvania Judicial Code of Conduct prohibits judges from seeking a benefit from their office.

How To / Cómo Hacerlo

LNP obtained dashcam footage of the incident through a public records request to East Lampeter Township.

The video shows the view from an unmarked police car on Pitney Road in East Lampeter Township on April 26. After pulling into a turning lane to allow Reinaker to pass, Officer Chad Snader initiated a traffic stop of Reinaker’s black SUV.

After the two cars pulled into a parking lot, Reinaker put his vehicle in park, got out of the car and approached the officer to inquire about the stop.

“What do you think you’re doing pulling me over?” Reinaker asks. “For blowing my horn?”

The officer exited his car and instructed Reinaker to return to his vehicle.

Reinaker turned back toward his SUV but made another remark before he returned to his car.

“You better check the registration on this plate soon, mister,” Reinaker told the officer, while pointing to his own car’s license plate.

Snader returned to his vehicle and less than a minute later approached Reinaker’s car and said, “Have a good day, Judge.”

Snader did not respond to multiple requests for comment.

The dashcam video shows that after the officer checked the registration, he released the judge without explaining why he was stopped.

Zerbe said he did not speak to the officer or Reinaker about the incident and did not comment on why the officer used his discretion not to cite Reinaker.

The chief said “following too closely” (a summary offense under the state vehicle code) usually does not result in a citation unless it is connected with another incident, such as an accident.

In response to questions about the incident, Reinaker sent the following statement:

“I respect and greatly appreciate the hard work of our law enforcement officers in Lancaster County. Any parking or traffic citations I have ever received were paid without objection. I neither expect nor deserve any special treatment and made no such request on this occasion. However, I am not immune to an instance of mild frustration during a morning commute. In this case, it was not clear to me why I was pulled over. I obeyed the officer’s directives and intended no disrespect.”

Asked to clarify what he meant when he instructed the officer to check his registration, Reinaker said he knew the officer would be checking and wanted to get on his way as soon as possible.

“If my intent was to tell him who I was, I could certainly have done so,” Reinaker said.

Sam Stretton, a Chester County attorney with over three decades practicing judicial ethics law, said Reinaker’s statement seems to imply he should receive special treatment as a result of his position.

“That would be improper use of the office, even though he didn’t say he’s a judge, because he implied,” Stretton said.

This story was developed as result of a tip from a reader. You can submit a tip to LNP here. To learn how to submit materials anonymously, click here.

The state’s Judicial Conduct Board investigates complaints filed against Pennsylvania judges asserting violations of ethical rules, among other complaints. The board is an independent entity within the state's judicial branch. Richard W. Long, the board’s chief counsel, declined to comment on the incident.

Stretton said the officer’s release of the judge without a ticket or warning meant he took away a message from the comment about checking Reinaker’s registration. “And (Officer Snader) understood,” Stretton said, adding that such incidents can lead to distrust of the office if the public perceives a judge sought to benefit from his or her position.

John Leubsdorf, a law professor at Rutgers University and an expert in legal ethics, noted judges in other states have been reprimanded for similar instances, citing cases in Illinois and New Jersey. However, in those cases the judge directly asserted their position and there were other contributing circumstances that led to the discipline.

Years after arrest, the poor owe thousands in court costs they can't afford

How we reported this:

LNP submitted an Act 22 request to East Lampeter Township for the dashcam video.

Act 22 was established in 2017 and governs the release of video and audio recordings made by police departments.

Requests must be made within 60 days of an incident.

Requests can be denied if the incident resulted in charges or is under investigation.

As the incident in this case was not under investigation and did not result in charges, LNP’s request was granted within five business days.

A reminder, Judge Reinaker, that no one is above the law [opinion]

After Judge Reinaker's self-report to Judicial Conduct Board, what's next?

In Pennsylvania, judges seem to be judged more leniently than others [editorial]