Lancaster County’s president judge has ordered that autopsy records remain sealed in the mysterious unsolved death of a federal prosecutor whose stabbed body was found in a northeast corner of the county in 2003.

Judge David Ashworth said he recognized the “unique and important role the media plays in ensuring the transparency of court proceedings,” but that releasing the records poses “a threat of substantially hindering or jeopardizing the open, active and ongoing criminal investigation into the death of Jonathan Luna …”

LNP Media Group, the publisher of LNP | LancasterOnline, has been seeking access to the records since they were found nearly a year ago. Tom Murse, LNP’s executive editor, said he was reviewing the decision with attorneys and will decide whether to appeal.

The records had been presumed lost or not in the county’s possession, but were found in county archives in January 2020. Soon after their discovery, the district attorney’s office had them sealed on the grounds that releasing them could jeopardize the investigation into Luna’s death.

Ashworth agreed, based on his review of evidence and consideration of arguments by attorneys for LNP and the state during a hearing on the issue last year. 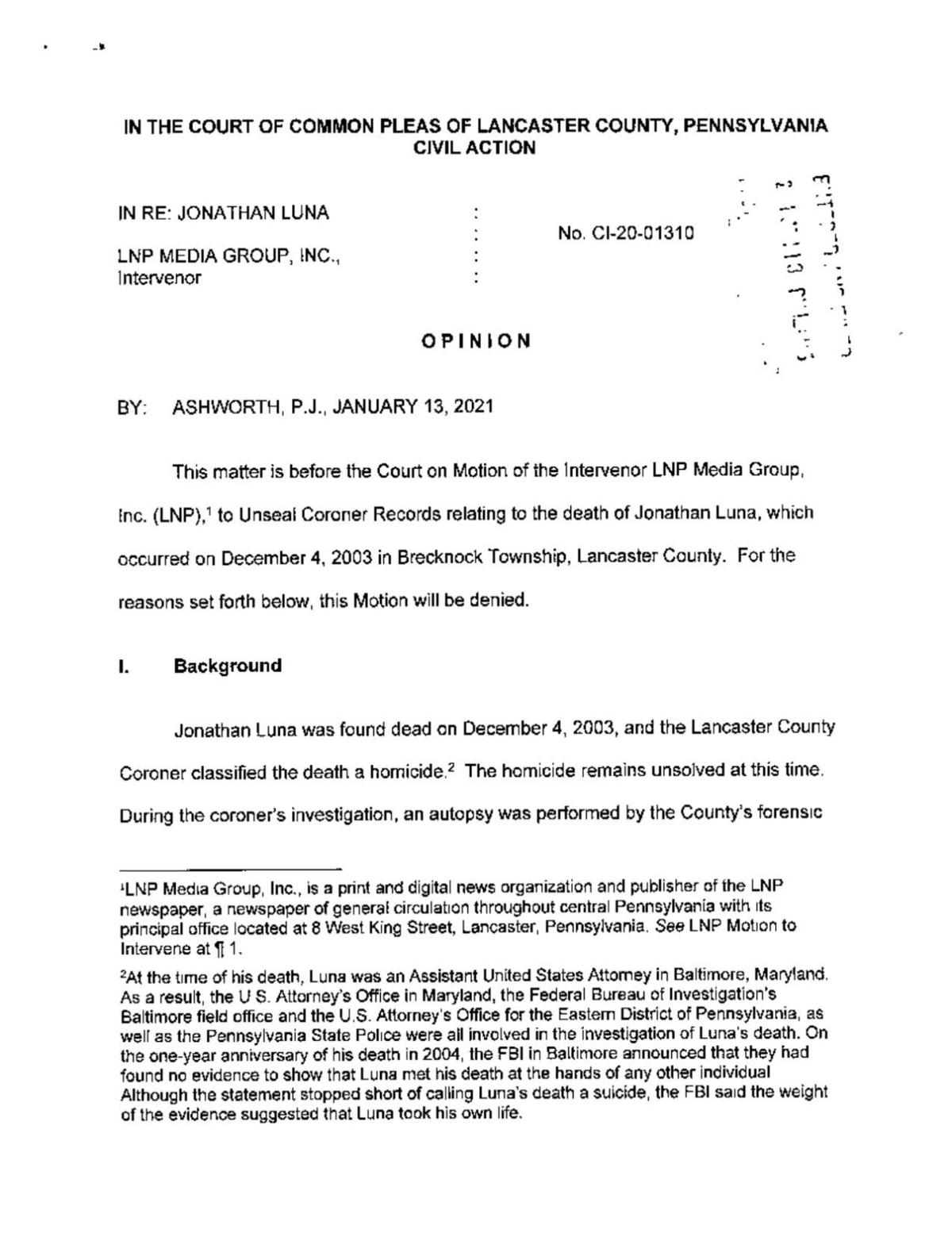 “To permit wholesale disclosure of the contents of the documents as requested by LNP would prejudice the ongoing homicide investigation,” Ashworth ruled.

Ashworth also rejected LNP’s argument that releasing the documents could help the case.

“If the release of autopsy reports was proven to be an aid in solving cold case murders, the Commonwealth would advocate for such action. Clearly, it does not,” he wrote.

At an October hearing, a state trooper testified the case was considered an open cold case and that a trooper reviews the case at least annually.

LNP argues for release of Luna autopsy, disputes assertion that his death is being investigated

Luna, 38, an assistant U.S. attorney from Baltimore, was found dead around daybreak on Dec. 4, 2003, in a stream by Dry Tavern Road in Brecknock Township. The married father of two had 36 stab wounds.

At the time, the county’s coroner ruled his death a homicide, caused by traumatic wounds and drowning, but federal authorities eventually said Luna committed suicide.

The coroner’s homicide ruling still stands. Few details of the investigation have been revealed over the past 17 years. There are no known suspects or motive.

The memo from Lancaster County’s top attorney in October was direct and unambiguous: “The co…

Lancaster County's archives, where the Luna files were found, house the history of the county's government [video]