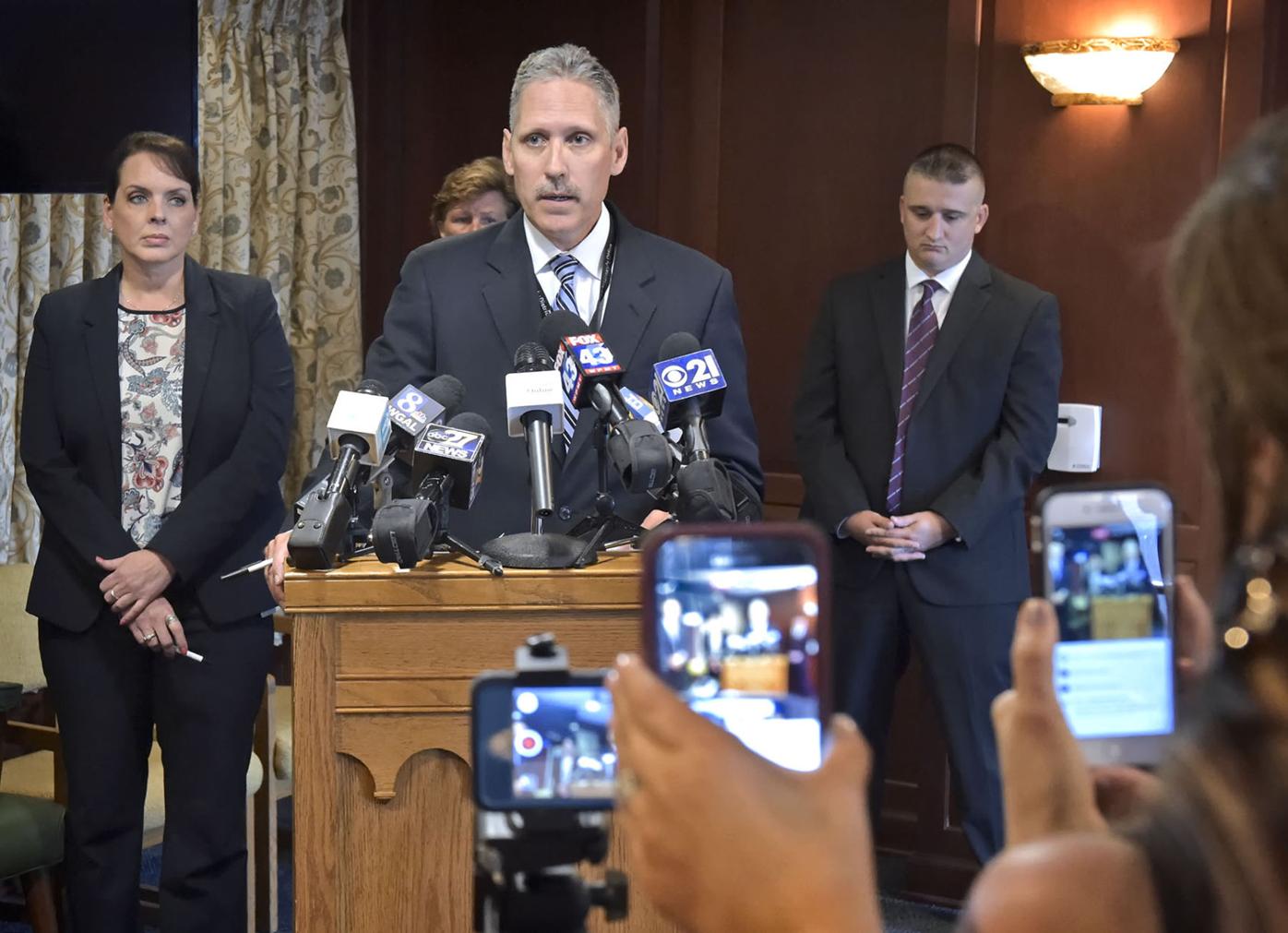 Lancaster County District Attorney Craig Stedman speaks at a press conference on Aug. 11, 2016, about new policies and procedures in response to recent animal cruelty cases in the county. 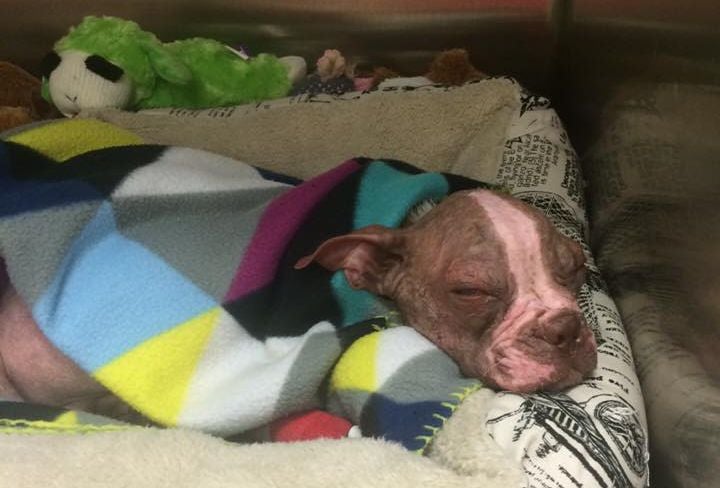 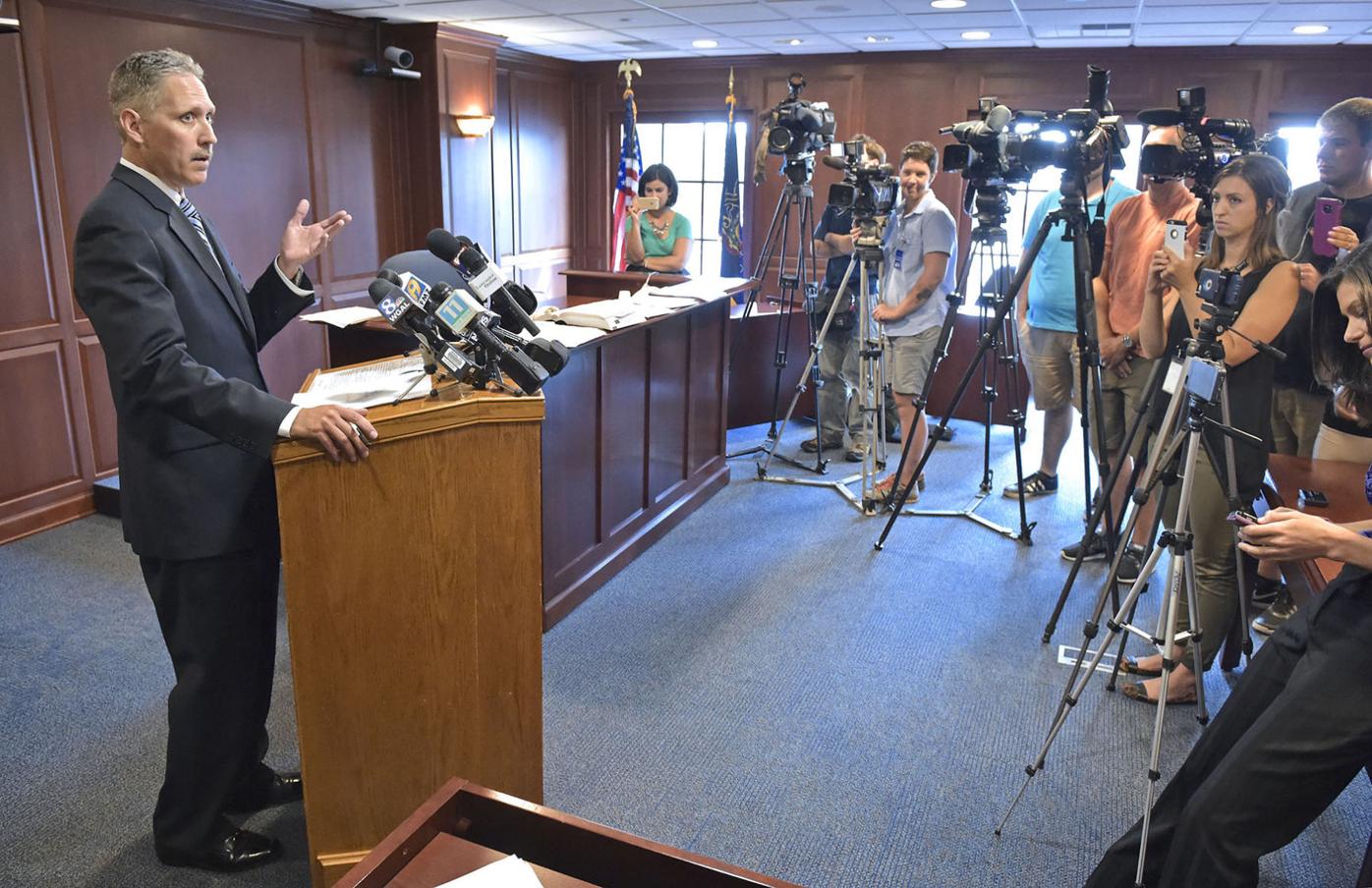 District Attorney Craig Stedman speaks at a press conference in August about new policies and procedures in response to recent animal cruelty cases. 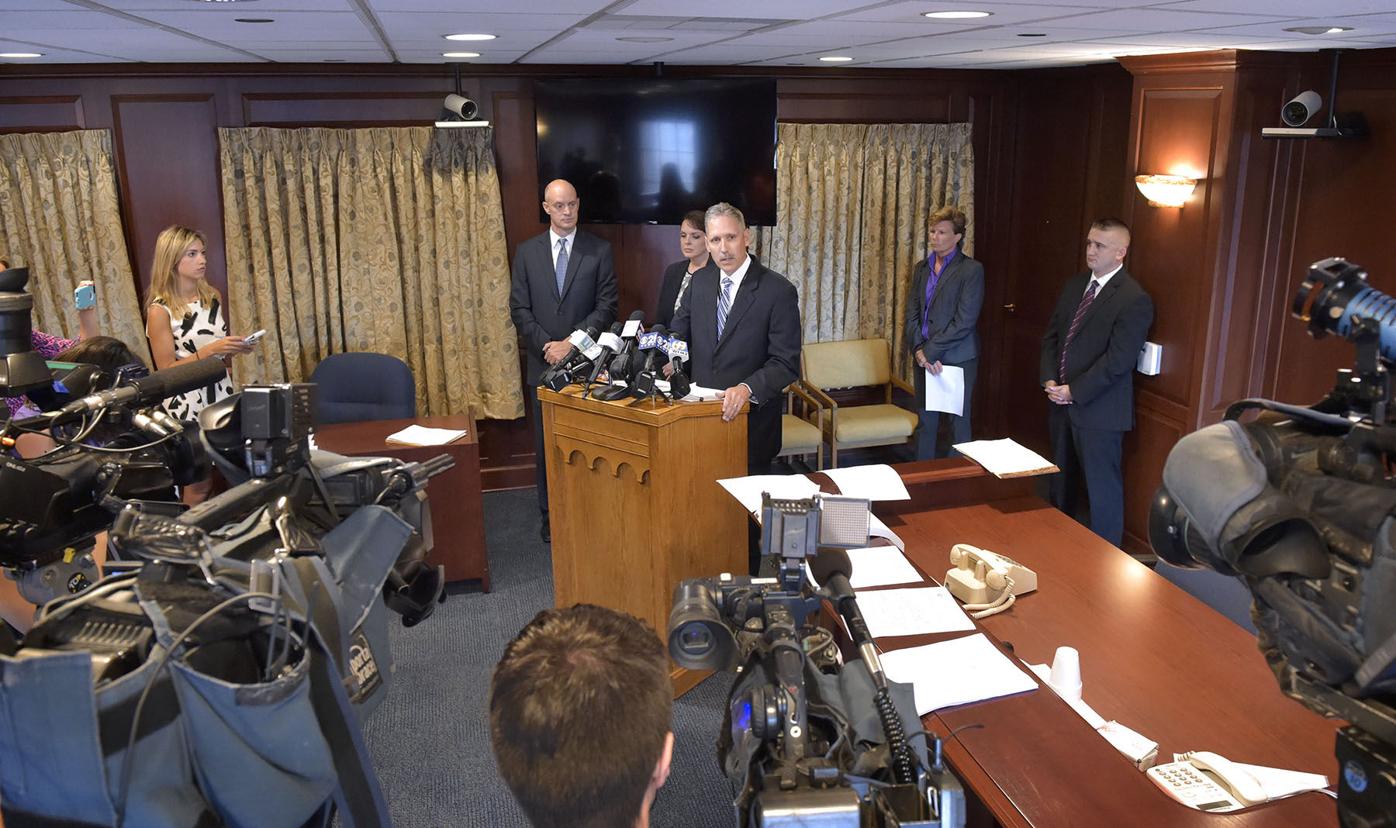 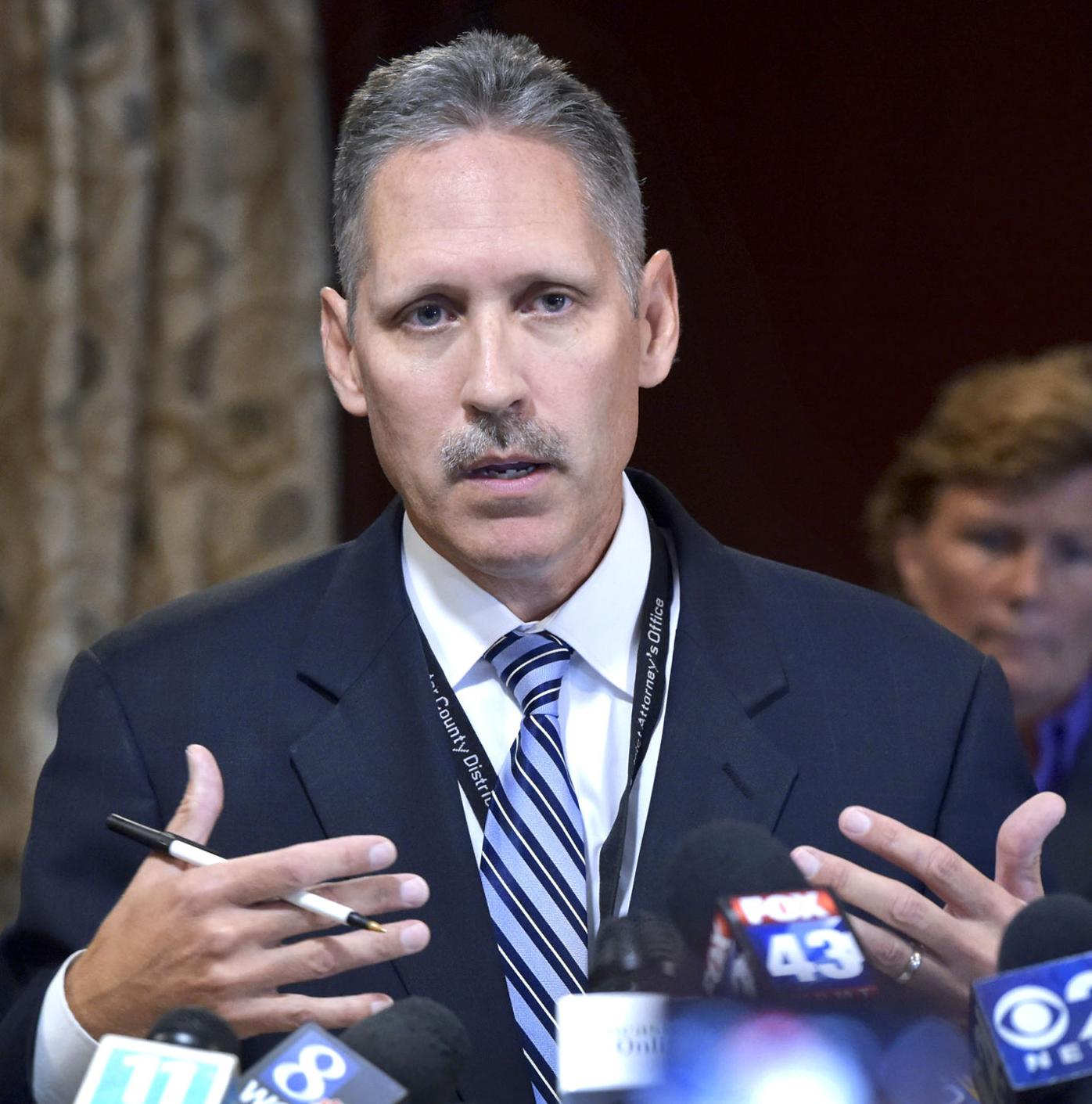 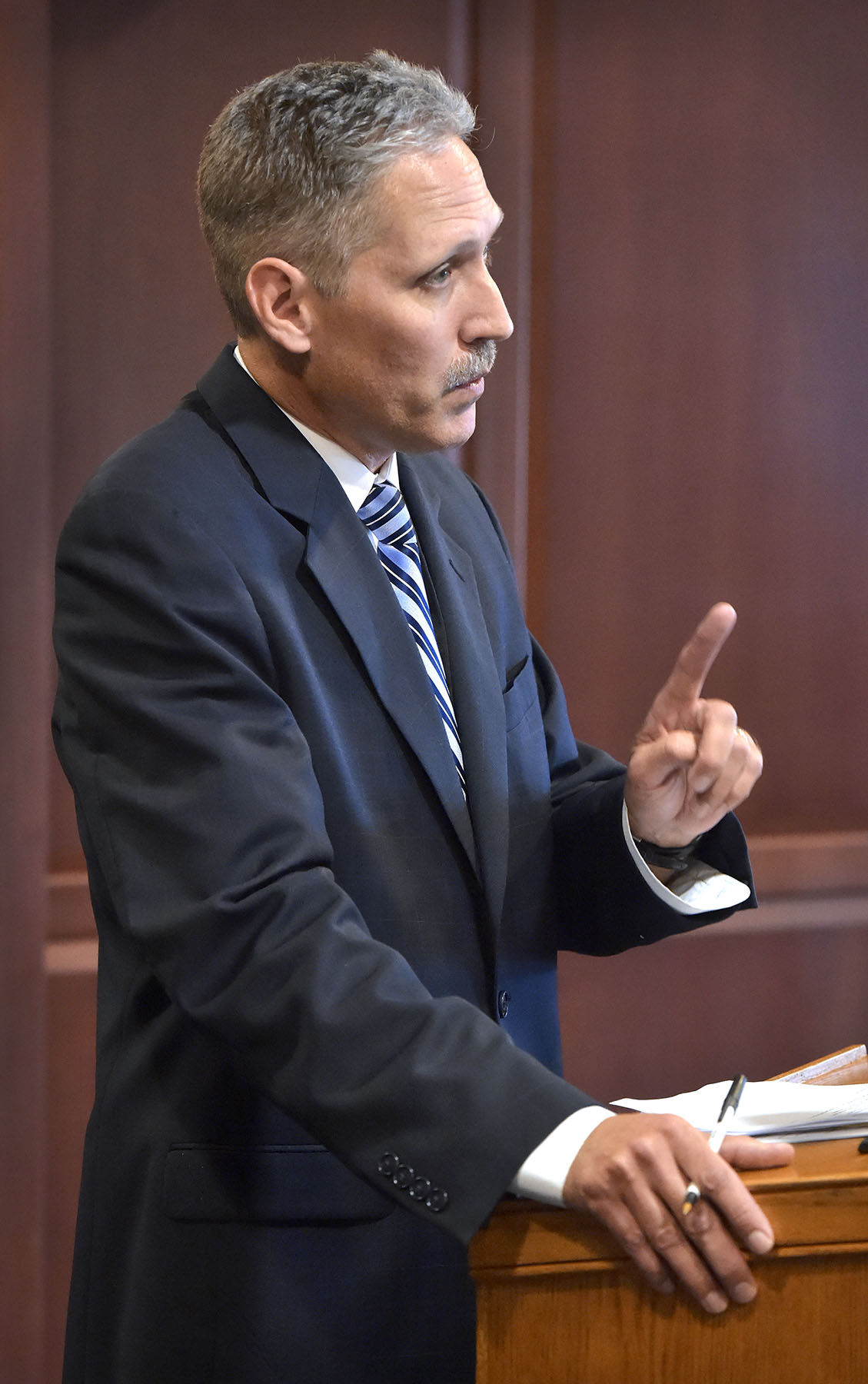 Lancaster County District Attorney Craig Stedman speaks at a press conference on Aug. 11, 2016, about new policies and procedures in response to recent animal cruelty cases in the county.

District Attorney Craig Stedman speaks at a press conference in August about new policies and procedures in response to recent animal cruelty cases.

The Lancaster County District Attorney's Office wants to suspend the appointment of a local animal cruelty officer who chose not to prosecute the breeder of a puppy rescued from a Quarryville farm in July.

District Attorney Craig Stedman made the announcement during a Thursday morning press conference where he also announced state police had filed a citation charge in the case involving a puppy named Libre.

“There were questions in my mind about the conduct of the investigation and what took place, and so that led us to look into this investigator's conduct and activities,” Stedman said. “Ultimately, a humane society police officer has the powers of arrest.

Stedman said his office’s petition only relates to Martin’s role as a humane society police officer. Judge Joseph C. Madenspacher appointed Martin to the role in June 2014, according to the petition for suspension of appointment.

Martin did not return requests for comment on Thursday.

Ericson said a press release will be forthcoming at a later date.

As Stedman looks for an “increased professionalization” on how animal cruelty charges are handled, he said, enforcement will not be handled by Lancaster County SPCA personnel for the time being.

State and municipal police departments will handle their respective jurisdictions, he said.

The civil action cites the “substandard of conduct normally expected of humane society police officers” as reason for suspension.

The petition did not provide further details of how her work has been substandard.

Further evidence will be provided at a hearing scheduled at 10 a.m. Aug. 22 at the county courthouse before Lancaster County President Judge Dennis Reinaker, according to court records.

“The Libre case is public record, but the other things that we have, I don't think it's appropriate, and I don't think its fair (to) Sue Martin for me to go into that at this point in time,” Stedman said.

Libre, a Boston Terrier suffering from demodectic mange, was rescued July 4 after a delivery man saw the puppy lying unresponsive in a pen.

Martin chose not to pursue a cruelty charge in the case even though a rescuer, who has since adopted the puppy, said Libre was emaciated, dehydrated and barely breathing when taken to a Dillsburg veterinarian for round-the-clock care.

State police were asked to conduct a independent investigation, one they finished a "long time ago," separate from Martins', Stedman said.

Charges were withheld until the Martin's petition for suspension was prepared, Stedman said.

The differences between the reports were “divergent to say the least,” Stedman said.

Benjamin S. Stoltzfus, 33, of the 800 block of Conowingo Road in Quarryville, was charged with a summary count of cruelty to animals.

Stoltzfus was cooperative with the investigation and no longer has dogs, Stedman said.

“This led to questions in my mind. If the state police can, essentially, just go do down and do a relatively simple investigation where we have a pretty clear cut case of animal abuse, where are we at?” Stedman said.

(Story continues below the document) 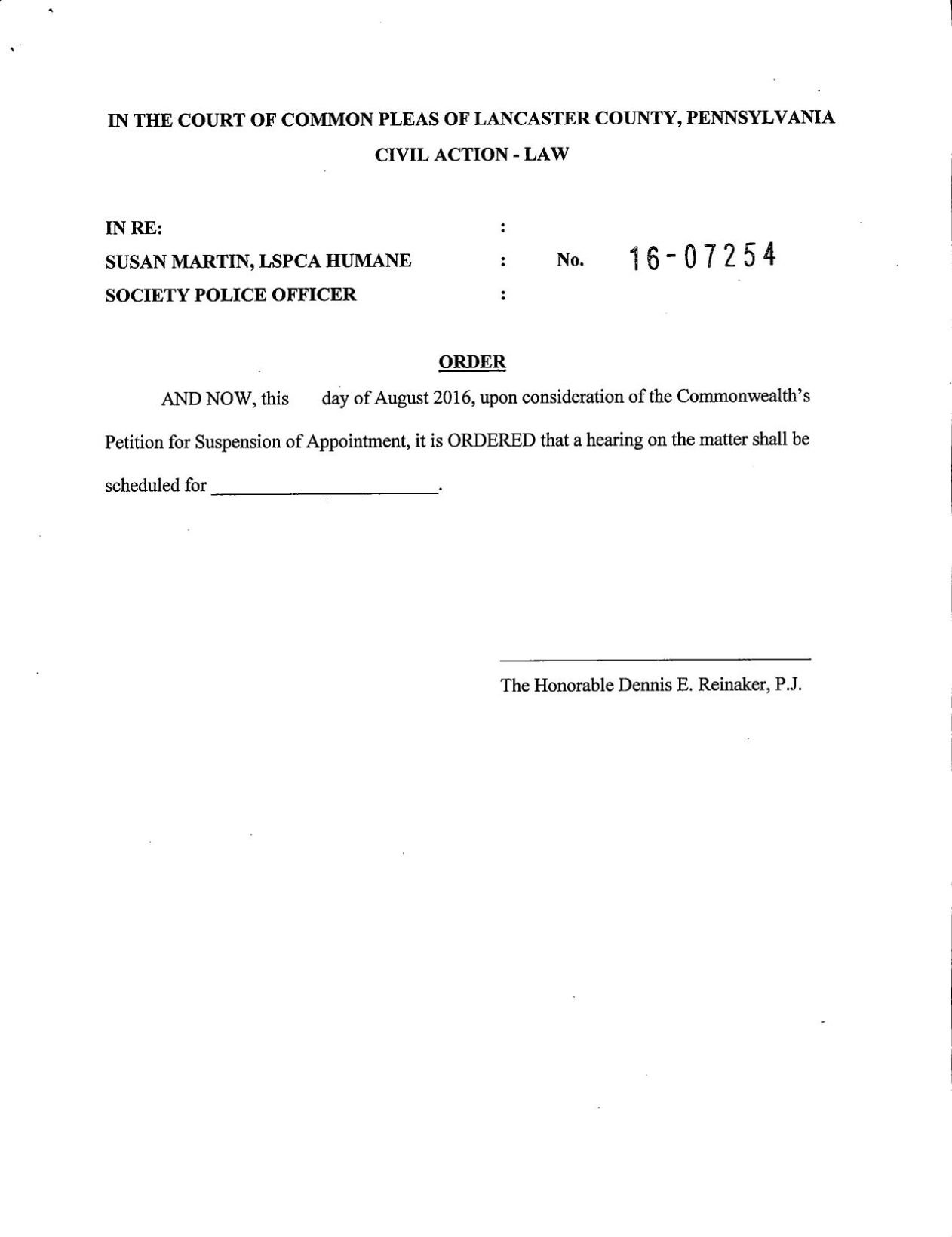 At the press conference, Stedman referred to Martin as the only humane society police officer in the county that he is “aware of.”

The District Attorney's office sent out an email after the press conference to clarify a “misstatement.” The SPCA is not the only animal cruelty enforcement agency in Lancaster County, it said. The email cited LAPS, Large Animal Protection Society, and ORCA, Organization for Responsible Care of Animals, as other enforcement agencies.

The Pennsylvania Department of Agriculture website has a sortable database that shows 13 people appointed as humane society police officers in Lancaster County.

Along with Martin, the lists features two other Lancaster County SPCA employees. However, a representative for the district attorney's office said that the list is not accurate and is not kept up to date.

Stedman addressed some of the issues with the fluidity of the position during the press conference.

“That's gone up and down over the years,” Stedman said of the number of officers. “Right now she is the only one, and that's why I am talking about we need to professionalize this.

“Its like, sometimes you get humane officers come in and they'll come in with an organization and they are here for a year or two and they'll go,” Stedman said. “They have cases left over. We need to do better here. We need to have a sustained professional presence dealing with animal cruelty.”

A day after the Lancaster County District Attorney Craig Stedman filed a petition to suspend her appointment as a human society police officer, Susan Martin said she would "gladly relinquish that license without any civil action."