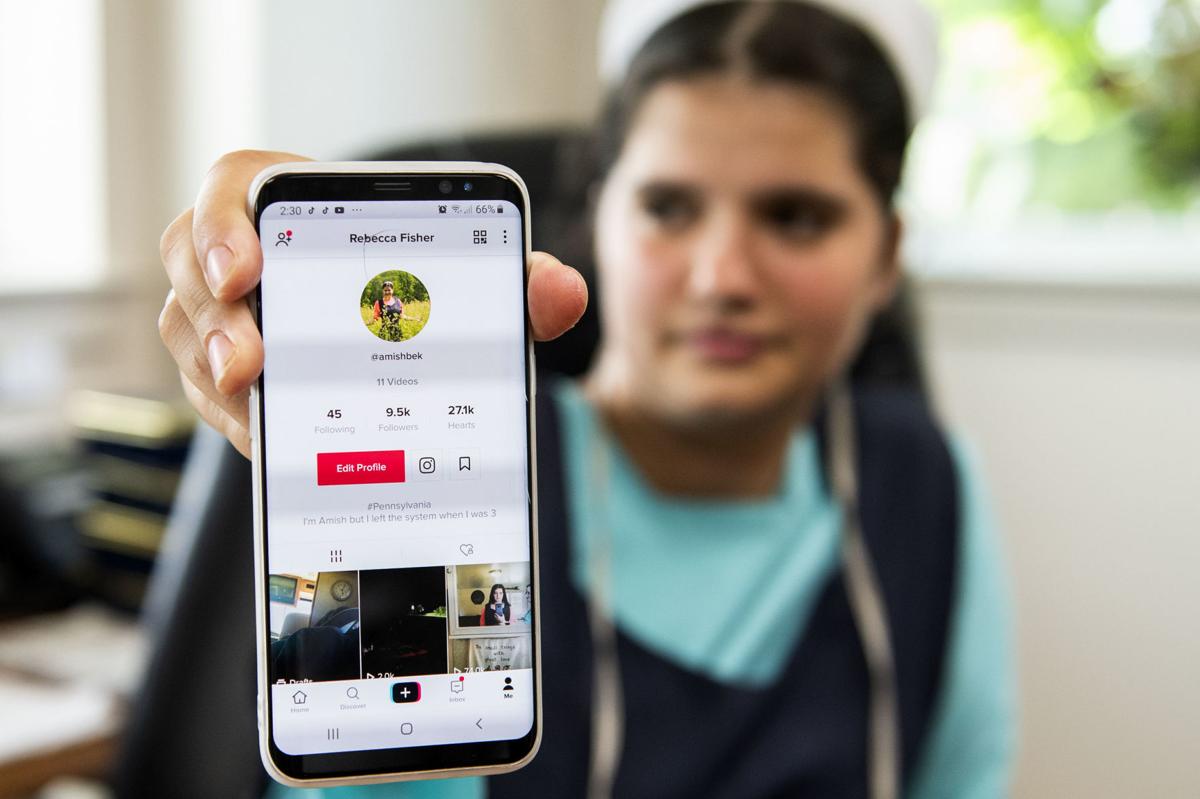 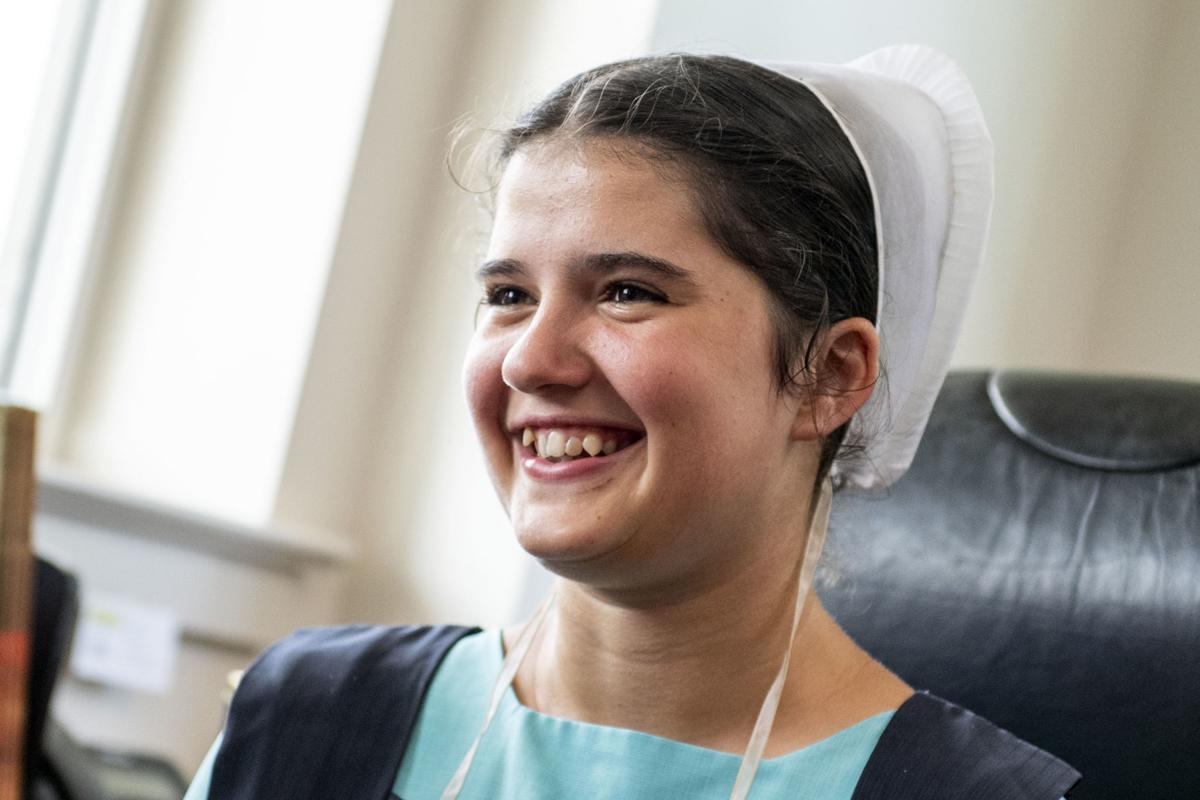 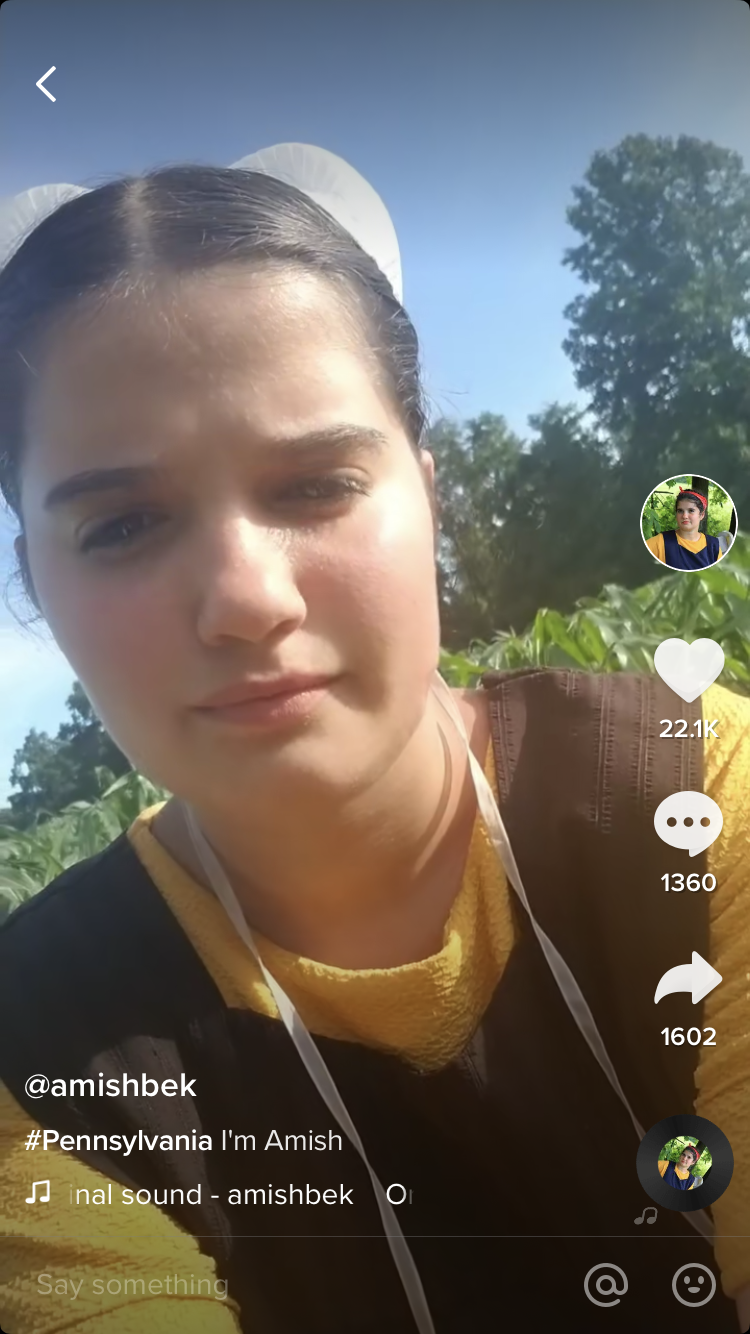 “I wasn’t going to post anything (on the app), but then I saw (Pennsylvania) was trending,” the 14-year-old Amish girl said.

Her first video, which featured Fisher educating viewers on how to properly pronounce Lancaster (read: LANG-kiss-ter not Lang-KAS-ter) has racked up over 430,000 views since being posted in early July.

Since this first video, Fisher has posted at least 21 other 15-second videos to her account, @AmishBek, raking in over 1 million views, 38,800 likes and over 12,200 followers, as of the deadline for this story.

In one of her videos, she speaks in Pennsylvania Dutch. In another, she records her backyard — barn in view — as rain pours down. One video begins with Fisher stating “I am absolutely not Mormon” in response to the many comments questioning her faith. She goes on to say she is “absolutely Amish.” Then, she furrows her brows.

“Well, not exactly,” she adds.

Fisher’s parents, Aaron and Barbie, left the Amish church Rebecca was 3 years old. The family says it holds all the Amish values and dresses in the traditional outfits.

“We consider ourselves Amish,” Fisher says in the video. “I’m still Amish. I still have Amish blood.”

Since her first video, Fisher has collected over 1,000 comments, many of them questioning her upbringing or attempting to explain why the young Amish girl is on the app.

Fisher said she often feels like she’s stuck between worlds: the Amish shun her and the "English” gawk. And now, with the onslaught of comments, her identity is being debated on a much larger scale.

"No hate, but Amish are not allowed to have phones," commented one person.

"Guys, the Amish go through a period where they can have modern day things ..." commented another.

Another person attempted to explain Fisher's faith, "You must be Mennonite or River Brethren to have that phone."

Fisher stands firm in her identity as an Amish girl.

She said she doesn't respond to the messages that are "telling me what I am and what I'm not," as they aren't worth the energy.

The juxtaposition of a young Amish girl on TikTok draws interest — and views. A video featuring Fisher pulling her dark hair back into a bun received 135,100 views; a dark and blurry video of Fisher's friends playing near a campfire only received 11,600.

Fisher said she has realized which videos draw in a larger crowd and has plans to take full advantage of that as she continues to make videos.

While Fisher appreciates the attention she's received on TikTok, she would have preferred to receive more views on her YouTube channel.

At the beginning of July, Fisher bought a smartphone with the intention of filming daily "vlogs" — or video logs — of her day to post on YouTube.

It's something she's wanted to do for years, her father said.

When she's not watching YouTube channels "Jack and Gab" and "Jess and Gabriel," Fisher reads up on what makes a successful YouTube account and takes down notes.

So far, she has only posted two videos: "My Story" and "Am I Amish."

In both, she talks about the struggle of living in between the Amish and the English.

The videos have collected just over 1,000 views.

She also mentions her family's food bank distribution center, Blessings of Hope, and how viewers can help the nonprofit.

Fisher's parents see her interest in pursuing YouTube and TikTok as a positive thing.

"It's about reaching out and being a blessing," said Fisher's father, Aaron.

And that's what Fisher tries to do in her videos: be a blessing.

"I like to hide messages in my videos — not bluntly say something, but just kind of hide it in there so (viewers) still get the message," she said.

It might seem as if Fisher is pushing against her Amish heritage by embracing technology. But the Amish don't necessarily reject technology — instead, emerging technologies are evaluated by whether they can be adapted to fit the Amish values, said Charles Jantzi, professor of psychology at Messiah College and researcher of Amish adolescents and social media.

Fisher and her father see community outreach as a core value of their faith and she's found a unique way to adapt YouTube and TikTok to fit that value.

"Amish have to think outside of the box to be inside of their box," Fisher said.

Blessings of Hope, which serves as a food bank for food banks, survives challenges and looks to expand

Weekend weather: Sunday will be partly sunny with temps in the low 80s

Partly sunny conditions are on tap for Lancaster County.

The end of the year is a time to reflect and remember. We showed you our top stories of 2019 as voted on by you, the readers.