When people took to the streets here and nationwide to protest police brutality after George Floyd died while in police custody in Minneapolis, their reaction was ignited by a video that gave a clear view of a blatant action.

But as Lancaster city planning commission Chair Eve Bratman knows, not all injustice is done out in the open and captured on a video that goes viral. Sometimes it’s more subtle, getting done with documents, rules and decisions in offices and meetings, rather than on a street.

“I felt it was important to do a public reckoning in terms of racial justice issues,” she said, including at the planning commission.

In what might be the first such action of its kind in the county, Bratman asked the city planning commission last week to approve a statement she drafted that condemns decades-old decisions that led to redlining, which segregated minorities, and public housing developments, which devastated some neighborhoods.

The statement includes a vow for planning commission members to put racial equity “front and center in its work.”

The planners agreed, by a 4-1 vote. Commission member Chris Modlin dissented because he thought it should be fleshed out by concrete steps the commission can take to make such a commitment happen. 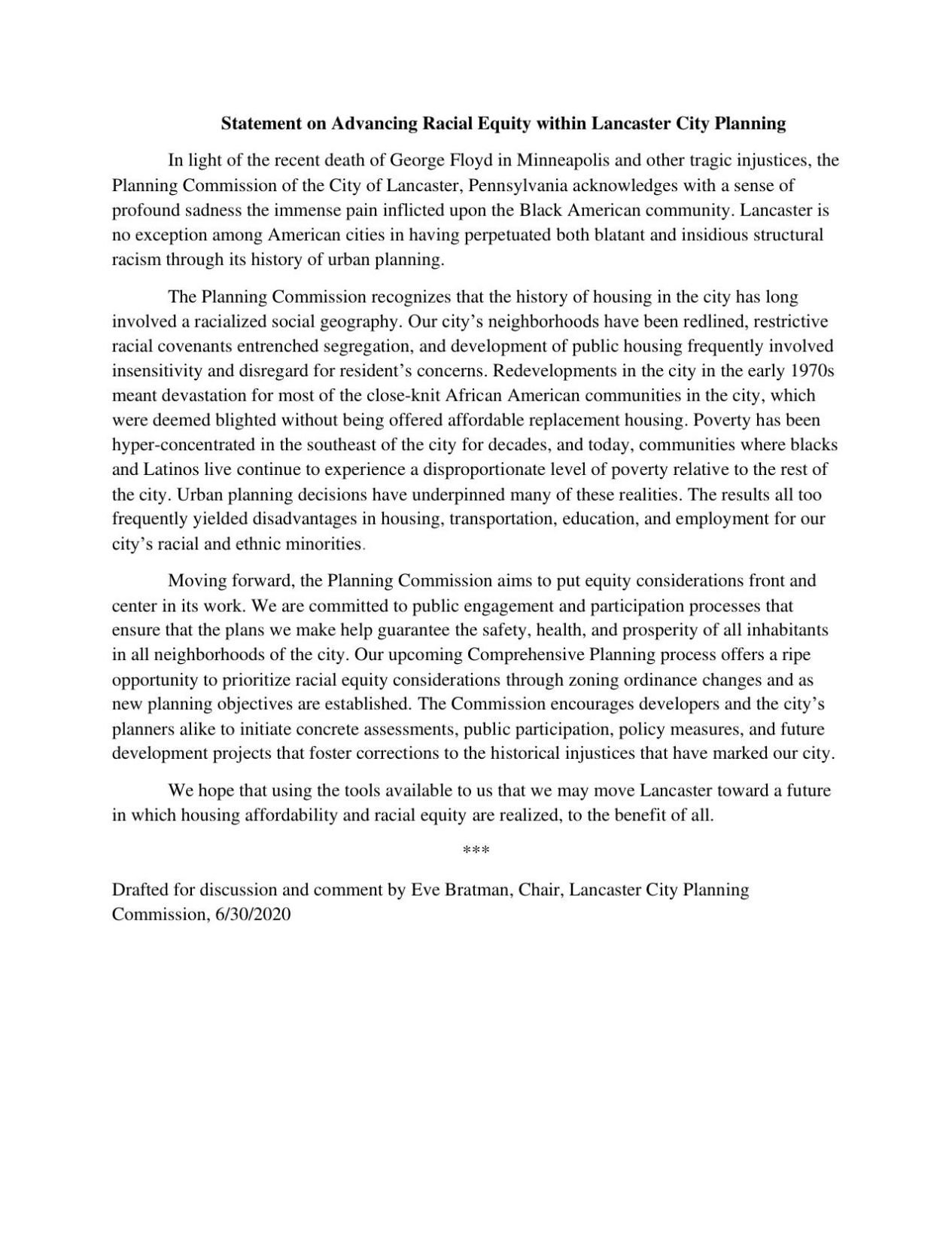 Modlin and fellow commission member Lagena Wright were named to a subcommittee to do just that, by identifying actions to take and data to consider moving forward.

Nelson Polite Jr. was not present for the virtual vote but later joined the Zoom call. Remaining commission members Jocelynn Ritchey and Jose Colon were absent; a ninth seat on the board is vacant.

Members were supportive of the statement.

In the now-sanctioned statement, the planning commission said it “recognizes that the history of housing in the city has long involved a racialized social geography.”

Bratman said she learned about many of the earlier urban planning policies in a book by fellow Franklin & Marshall College professor David Schuyler titled “A City Transformed: Redevelopment, Race, and Suburbanization in Lancaster, Pennsylvania,” which chronicles the city’s infrastructure development from 1940 to 1980.

Bratman said many of the policies on blighting “wreaked havoc and destroyed the Black community in the areas which they lived at the time,” mostly on the city’s southern end, and enabled segregation in the form of a “hyper-concentrated” level of poverty in the city’s southeastern end that remains to this day.

Blanding Watson, president of the Lancaster NAACP, welcomed the acknowledgement.

“These admissions now allow for discussions and planning to go forward with clearer eyes and frank inputs for the future,” he said in a statement to LNP | LancasterOnline.

The planning commission fell short of drafting an official resolution because it would have needed further consultation with the city’s solicitor to find out the “legal weight or binding-ness” of a resolution, Bratman said, but adds she doesn’t know if it would have made a difference.

With this commitment, Bratman said she hopes the planning commission can take steps to reexamine how it takes certain actions, including limiting zoning for single-family homes, which she called “incompatible with addressing some of the poverty” in the city, as well as determining blighted properties, among other priorities.

As a city resident, Standish said he personally appreciates what the city is doing in its reform efforts.

“We’re working on a resolution but we’re also working to pair it with concrete action steps that will take a little more negotiation,” he said. He aims to have language put forth for discussion in council at a later date.

“We also recognize that the council and the city administration have not gone nearly far enough in ensuring racial and social equity, and police are only a part of that,” he said.

He said by addressing social equity barriers in planning such as housing, poverty and affordability — “that’s how we get ahead of the policing stuff.”

Editor's note: This story will be updated throughout the day with more information.