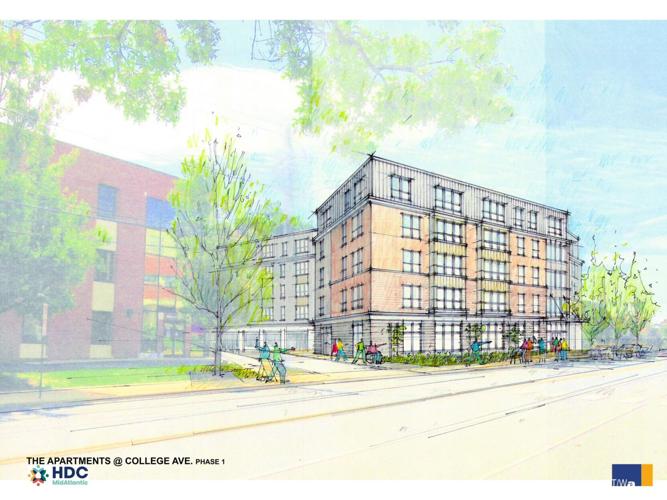 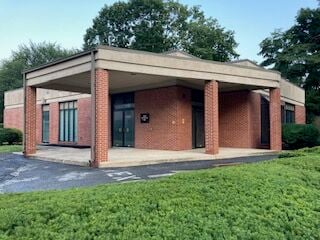 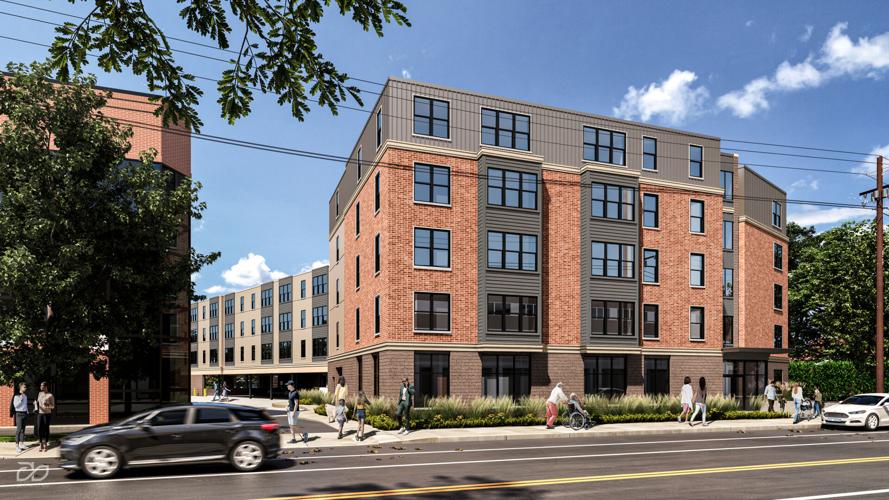 A recent rendering of the 213 College Ave. affordable housing development from HDC MidAtlantic, from the perspective of the former St. Joseph Hospital across the street on College Avenue. 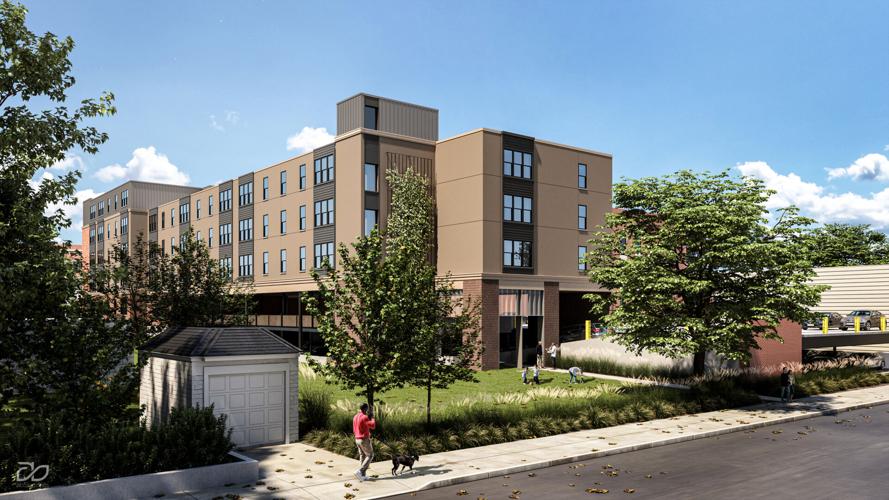 A view of the rear of the 213 College Ave. development from across the street on Elm Street. Nearby residents have leveled concerns that the development is not in keeping with the surrounding townhouses in the neighborhood. The back of the HDC MidAtlantic development has four stories.

The character and feel of the blocks that surround a proposed five-story affordable housing development at 213 College Ave. would not be compromised by the 64-unit apartment building, the Lancaster city Historical Commission decided unanimously Monday night.

The recommendation will now go to Lancaster City Council for approval in the coming weeks.

The 4-0 vote from the commission came after Lancaster-based nonprofit developer HDC MidAtlantic presented updated plans after its first trip to the commission in February. The proposals were largely the same, but they nixed plans for a rooftop area and a second driveway into a parking deck from Elm Street, to the rear of the development.

They also included more detailed renderings of the project and what types of materials planned for the building’s facade.

The building would include a masonry exterior on the ground floor at its front side on College Avenue, and then brick on the subsequent three floors, said Gary Weaver, a founding partner of Tippetts/Weaver, a Lancaster-based architecture firm. The fifth floor would include a dark gray metal siding.

The recommendations were an apparent setback for residents who have opposed the plan.

They have argued since a January zoning meeting that the development’s five-story plan is too big for the surrounding area and out of step with nearby 19th-century townhouses with ornate architectural details.

About six or so residents offered critical comments or opposition to the development.

Three residents spoke in favor of the plan Monday night.

Ultimately, the commission members appeared satisfied with HDC’s designs and how the footprint of the building means it won’t be visible from many vantage points on neighboring blocks. The five-story portion of the development at the front on College Avenue is across the street from the former St. Joseph Hospital, which has buildings on the same block that are as high as seven stories.

For the 213 College Ave. project, the Historical Commission was tasked with reviewing the demolition of the one-story medical building and whether the HDC plan was in keeping with the area’s streetscape — the appearance and feel of a block from the perspective of a pedestrian.

“Remember, this is what we’re supposed to rule by,” said John Lefever, a commission member. The five-story proposal is in keeping with other tall buildings on College Avenue, he said, and it would not really be visible above townhomes on West Chestnut Street, he said.

The 64-unit building on College Avenue is potentially the first piece of a major redevelopment of the former St. Joseph Hospital.

Meanwhile, HDC is working to realize three additional affordable housing developments on and around the hospital campus.

Another potential site for HDC is 913 Wheatland Ave. The developer explored the property to potentially host 30 new affordable units, but access rights for neighboring properties limited the amount of land available for construction, HDC said.

A group of notorious white nationalists met secretly in historic Lancaster County barn in 2020. Why here?

A group of the nation's most notorious white nationalists met secretly at a historic Lancaster Township barn in 2020 to create the National Justice Party. They had help from the Holocaust denier and pro-Kremlin blogger who owns it.

Millions of Americans were angry after then-President Donald Trump lost the 2020 election.

A year ago, an LNP|LancasterOnline reporter was told that a new white nationalist political …

Who’s Charles Bausman? A closer look at the pro-Putin blogger who moved to Lancaster

Charles Bausman, whose family traces its presence in Lancaster County to the 1700s, took up …

Lancaster Township officials were able to broker a last-minute deal Wednesday, in real time, with county commissioners to secure $500,000 in f…