She considers herself a natural teacher and loved working on the sixth-grade math team at Martin Meylin Middle School.

But in early January, she quit to pursue a medical career. The decision, she said, broke her heart.

In her resignation letter, de Vitry cited increasing pressure and time spent on standardized tests in public schools as her reason for leaving. A copy of the letter can be seen here.

"I can't watch these kids struggle and work as hard as they can and still, they start to feel like failures. They give up," de Vitry said in an interview at the end of January.

De Vitry, who worked at Lampeter-Strasburg School District for 20 years, isn't the only one feeling the strain. Nearly half of teachers surveyed by the National Education Association last November said they'd considered quitting because of standardized testing.

Almost three-quarters of teachers in the survey reported feeling moderate or extreme pressure from administrators to improve test scores.

Pennsylvania conducted its first mandatory statewide assessment in 1984, according to the state Department of Education, but the federal No Child Left Behind act of 2001 is widely viewed as ushering in an era of high-stakes testing across the nation.

Supporters of No Child Law Behind and related policies call for greater school accountability to ensure that all types of students are learning and that American students can compete in the global economy. Under NCLB, schools not meeting targets on student test scores faced various consequences.

During the Obama administration, many states — including Pennsylvania — have received waivers from NCLB, but testing has remained central to education policy.

Pennsylvania currently ranks its public schools through School Performance Profiles, which draw primarily from student test scores. Teachers' job evaluations are based partially on the profile scores. And starting with the class of 2017, students will have to pass the state's Keystone Exams in algebra, biology and literature to graduate.

"There are people who are being told (by their doctors), 'Your blood pressure's too high, you need to do something else,' " Esh said in a phone interview.

"We really shouldn't be in a place in society where people who love teaching and are good at teaching should have to have a plan B."

Many districts also administer Certified Diagnostic Tools tests or other assessments that check student progress on state standards throughout the year. At Martin Meylin Middle School, where de Vitry taught, students take reading and math CDTs three times per year and science CDTs twice. The tests take 60 to 80 minutes, according to a district representative.

Kevin Peart, Lampeter-Strasburg's superintendent, acknowledged frustration among some teachers about testing, but declined to comment on de Vitry's resignation. He said the administration works proactively with legislators to address its concerns.

Poll: Is there too much testing in schools?

De Vitry said she resigned in the middle of the school year because she was accepted to a nuclear medicine technology program for next fall and needed to take prerequisite courses this spring.

As for what happens in public schools, she said she's not asking for tests to be abolished, just the emphasis placed on them to be reduced. 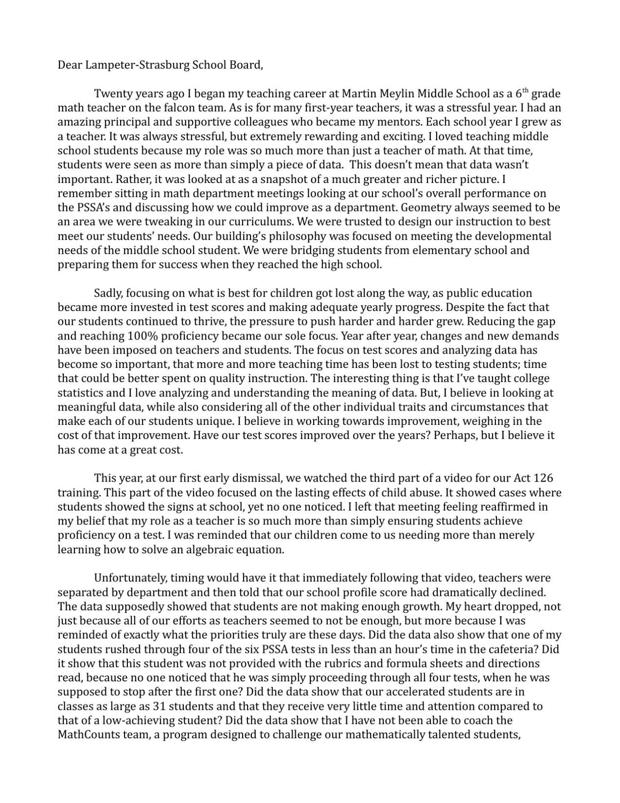 This is the resignation letter submitted by former math teacher Gina de Vitry to the Lampeter-Strasburg school board. Click on the image or th…

From an overhaul of No Child Left Behind to a growing opt-out movement, standardized tests are at the center of major national and local debat…