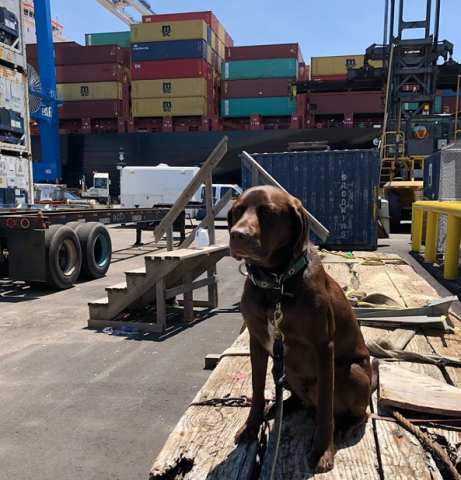 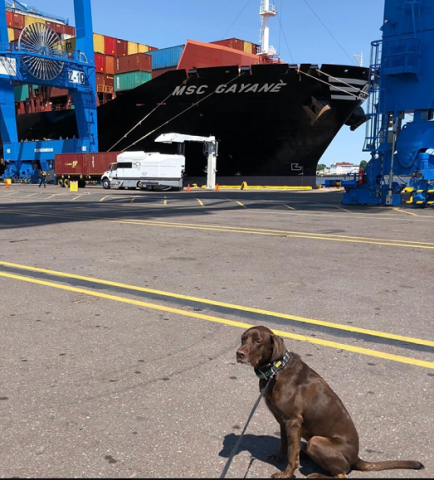 Bear, the Lancaster County Drug Task Force's K-9, took part in a $1.3 billion cocaine bust in Philadelphia, helped put a former Lancaster city drug kingpin back behind bars and assisted in a record methamphetamine seizure in the city.

2019 was the chocolate Lab's second year with the task force and his busiest.

He took part in about 110 searches and operations at houses, storage units and vehicles, up from about 100 in 2018, according to the Lancaster County District Attorney's office.

Bear can smell about 400 times better than a human, according to handler Detective Anthony Lombardo, of the Manheim Township Police Department. Bear is trained to detect — or "alert on" — heroin, cocaine, marijuana and other illegal substances.

Here are Bear's highlights from last year, according to the prosecutor's office:

• In a Feb. 6 raid, Bear and the drug task force recorded its largest single drug bust when they found 2.6 pounds of meth, valued at more than $70,000, while searching Johnathan Torres' East Ross Street home. More than $5,600 worth of cocaine was also found.

Torres, 32, pleaded guilty to drug dealing charges in August and was sentenced Oct. 25 to five to 10 years in prison and one year of probation.

• On Feb. 12, Bear helped break a Philadelphia to Lancaster fentanyl connection when he detected the drugs in a vehicle in the city. Thirty bricks of fentanyl valued about $78,880 were seized and two Philadelphia men were charged with drug dealing.

2 men charged with bringing $78K worth of fentanyl to Lancaster

• On June 17, Bear was among numerous K-9s asked to help federal agents in searching the cargo ship MSC GAYANE at a Philadelphia port. Some 16 tons of cocaine were seized.

• In the fall, Bear helped in searches of homes, storage units and vehicles owned by Jordan Luis Morales, 55, of Glenwood Avenue. About 1 3/4 pounds of cocaine, along with heroin, dealing supplies, cash and three handguns were found.

Morales ran a multimillion-dollar drug ring in the late 1990s and, earlier, had been a Drug Enforcement Administration informant. He pleaded guilty to conspiracy to violate the federal racketeering statute and drug offenses in the early 2000s and was sentenced to 10 to 20 years in prison.

He's awaiting trial on drug charges from his October arrest.

Bear, who turns 5 years old early this year, is only the third drug-sniffing K-9 in the 31-year history of the drug task force, with the last retiring more than a dozen years ago.

Harrisburg Pike Animal Hospital covers Bear's vet fees. Boarding and training cost about $1,200-$1,500 a year; drug forfeiture money and tax-deductible donations go toward that, food and related costs, according to the prosecutor's office.

Is your church livestreaming Easter service? Let us know. [survey]

What happened to the campaign for a county health department? [The Scribbler]

Ewell Plaza construction sidelined because of coronavirus, but bids being sought

How to make egg salad and DIY mayonnaise [Stay-Put Cooking]

Have you ever traveled nearly 3,800 miles for a job?

Bear, a chocolate Lab that works with the Lancaster County Drug Task Force and has helped detectives seize heroin, cocaine, marijuana and othe…