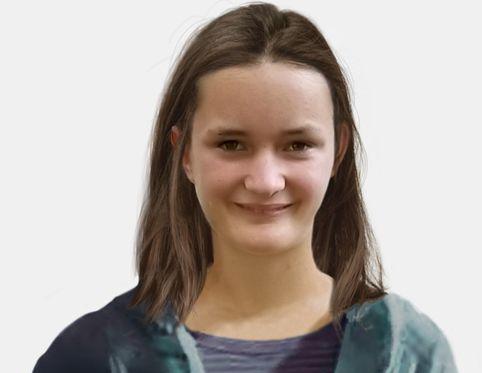 The FBI released this image, of which it said: "A composite photo has been created showing Linda [Stoltzfoos] as she might appear in street clothes and with her hair down." Stoltzfoos, an 18-year-old Amish woman, was last seen on a farm on Stumptown Road in Bird-in-Hand on June 21, according to police, and she's described as white, approximately 5’10” and 125 lbs.

The FBI released this image, of which it said: "A composite photo has been created showing Linda [Stoltzfoos] as she might appear in street clothes and with her hair down." Stoltzfoos, an 18-year-old Amish woman, was last seen on a farm on Stumptown Road in Bird-in-Hand on June 21, according to police, and she's described as white, approximately 5’10” and 125 lbs.

DNA evidence found on a stocking of a missing Amish teenager, now presumed dead, prompted prosecutors to file a murder charge against the man already accused of abducting her.

“Given the circumstances of Linda’s disappearance — specifically a forceful abduction by a stranger — we always feared the worst,” Adams said Monday.

Investigators zeroed in on Smoker after obtaining surveillance video from a home on Beechdale Road showing his car at a farm lane intersecting Beechdale. The intersection was the last place Stoltzfoos was seen and is just four-tenths of a mile from her home.

Another witness, and data from Smoker’s cellphone, placed Smoker at a business in Ronks later on the day of her abduction. Investigators found her bra and stockings buried in nearby woods.

Lancaster County Chief Public Defender Christopher Tallarico, who is representing Smoker on kidnapping and false imprisonment charges, said he knew prosecutors were contemplating the homicide charge but had no other comment.

Prosecutors had initially charged Smoker on July 10 with kidnapping and false imprisonment. He’s been at Lancaster County Prison without bail since then.

At the time, Smoker had been out of prison for about 16 months after serving 12 1/2 years of a 30-year maximum sentence for a string of robberies in August 2006 of which he and his brother Victor were convicted.

Investigators had Stoltzfoos’ stockings tested for DNA and recently were informed that Smoker’s DNA was found on one of them. Adams’ office declined to elaborate on when they got the results.

Adams also outlined other reasons leading to the homicide charge, primarily that there’s been no indication that Stoltzfoos is alive.

“The length of Linda’s absence —now six months — and the fact that she was forcibly abducted by a stranger support that same conclusion.” Adams said. “Linda was dependent on her community and family with whom she had a positive and fulfilling relationship. Linda’s failure to communicate in any way with any family member or anyone in her community, and the total cessation of all her routine activities, also is evidence that she is deceased.”

Court documents supporting the homicide charge state that Smoker had been stalking Amish girls and women prior to Stoltzfoos’ disappearance. Several Amish girls told investigators that a car matching Smoker’s drove suspiciously around them near where Stoltzfoos disappeared on June 20 and June 21. One of the girls told police the car passed her slowly four times, alarming her so much that she walked to a group of nearby fishermen and then to a nearby barn to hide.

And on June 20, Smoker bought two pairs of latex gloves, according to court documents. On June 21, in the hours before Stoltzfoos disappeared, he bought two eight-packs of disposable gloves and five pairs of shoe laces.

He also bought some clothes and a pair of sneakers at Walmart on June 20. Despite searching his apartment and a storage unit of his, the sneakers were never found.

Investigators said they found an open bottle of bleach in his car and that he’d been seen wiping down his car’s interior later on the day of Stoltzfoos’ disappearance. And they said indentations in the car’s carpet indicate that floor mats, which as “commonly known to contain trace evidence,” were missing, according to court documents.

A person who answered the door at Stoltzfoos’ house on Monday declined comment.

Mervin Fisher, 48, is the brother-in-law of Linda’s father, Lloyd. He left the Amish community in 2000 but has remained in contact with the family, especially over the last six months.

“I think, speaking myself as a father, if you have a man who knows where your daughter is and has not said, that’s tough when it comes to closure,” he said. Fisher helped search for Stoltzfoos in the summer. As of mid-afternoon Monday, he hadn’t spoken with the family about the homicide charge, but in his mind, it felt like progress.

“Even though we don’t know where she is, or her body, this feels like a step forward,” he said.

Dr. Donald Kraybill, a retired Elizabethtown College professor and an expert on the Amish, said his sense is while the community is grateful for the work of the investigators and non-Amish, such a crime can strain the trust they have in the outside world.

Kraybill said it will take time to tell how the community and family will respond. Amish are often forgiving to individuals who have wronged them, including in the 2006 Nickel Mines school shooting.

“This is not as easy a forgiveness story as the Nickel Mines shooting,” Kraybill said. “When the person is still alive, it is a very different situation.”

In 2006, Charles Carl Roberts IV killed five and injured five more at the Amish school in Bart Township before killing himself. Kraybill is sure that conversations on forgiveness will occur in the Stoltzfoos case, but added that forgiveness among the Amish is not a robotic action and that each situation is different.

Prosecuting someone for homicide when no body has been found is rare and has its challenges, but is possible.

Only one such case has been prosecuted in Lancaster County, that of James D. Lewis Jr. — known as “Squirt” — who disappeared 29 years ago and whose mother’s boyfriend was convicted of third-degree murder.

Former Washington, D.C., federal prosecutor Thomas A. DiBiase talked to LNP | LancasterOnline this summer about the prosecuting no-body homicide cases. He’s written the book, “No-Body Homicide Cases: A Practical Guide to Investigating, Prosecuting and Winning Cases When the Victim is Missing,” and has consulted on more than 40 no-body cases. He also runs the website, nobodycases.com, where he maintains a list of such cases.

Having a body can show how a person was killed and its location can also help investigators figure out what happened, and when.

Based on his data of 538 U.S. cases through March, prosecutors won convictions in no-body cases about 86% of the time compared with a conviction rate for all murder cases of 70%, based on Bureau of Justice Statistics.

The conviction rate is high, he said, because only the strongest no-body cases go to trial and the killer is often obvious, such as a husband or boyfriend.

The biggest challenge to prosecutors taking a case to trial is proving the victim is dead and hasn’t chosen to disappear, he said.

When a person who would not otherwise be expected to leave disappears, it raises the possibility of foul play, he said. And people who willingly leave their lives are likely to leave some sort of digital clue behind.

His kidnapping and unlawful restraint charges have been moved to Lancaster County Court of Common pleas and are moving through the court process. He has pleaded not guilty.

An initial court appearance had not been scheduled on the homicide charge as of Monday afternoon.

It’s too soon to say if the two cases might be combined, according to the office. The office also declined to say if it is considering seeking the death penalty.

Read the Affidavit of Probable Cause below. Click on the PDF to bring up the full document. 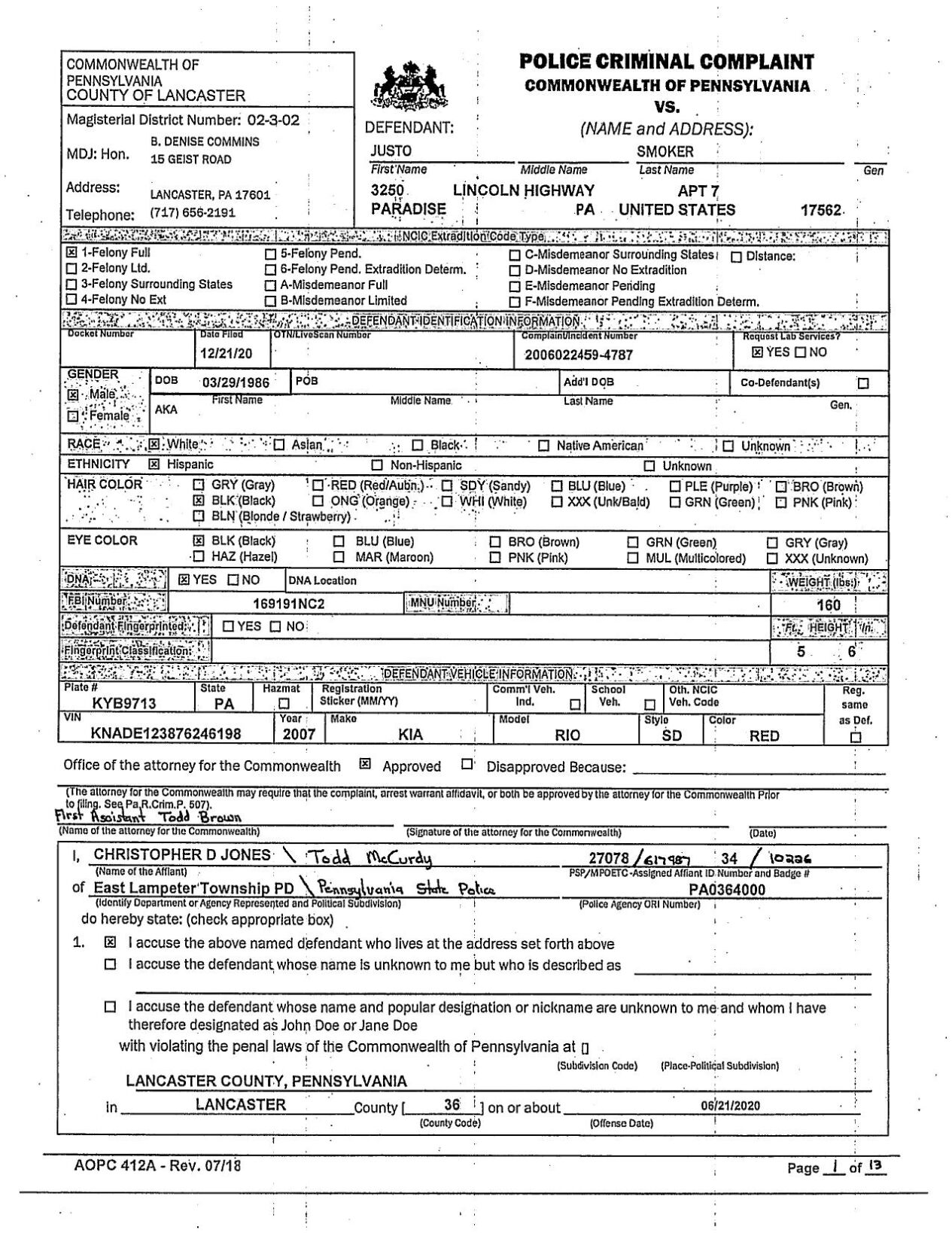 Police believe a Warwick Township man who in September was found in his basement with multiple stab wounds inflicted the injuries himself.

The Lititz Borough Police Department recognized two officers this month for their actions that saved the lives of a man and woman a man this year.