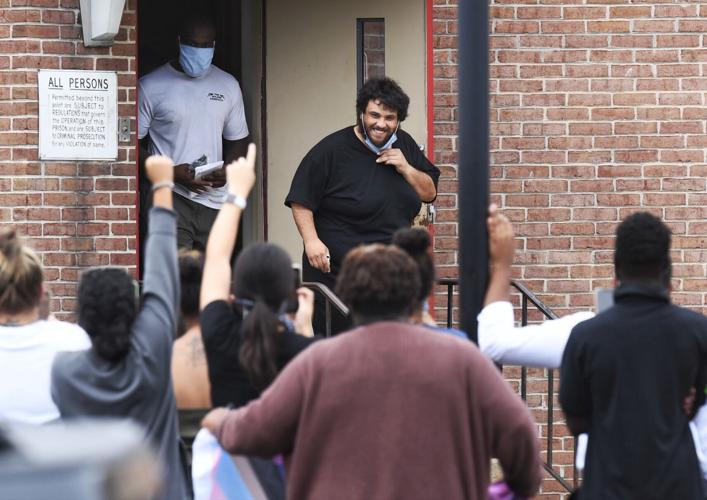 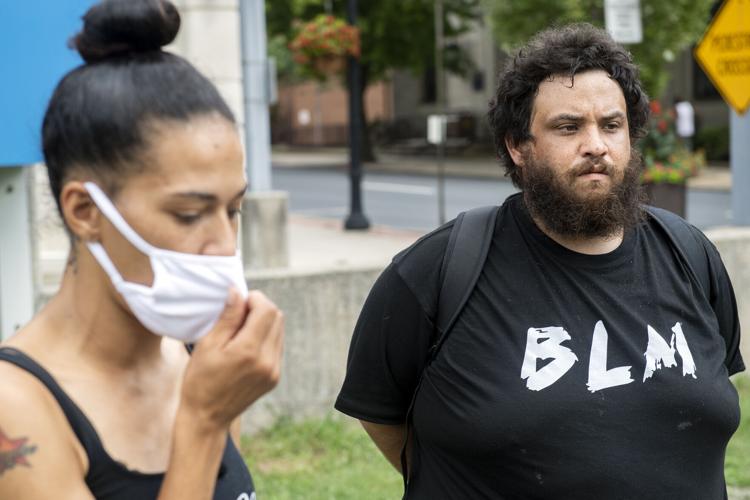 Jessica Lopez, left, and Dylan Davis, two of the three protesters who were arrested on Aug. 5, speak to media on Saturday, Aug. 8, 2020. Lopez talked about the planned protest for Sunday at 5 a.m. 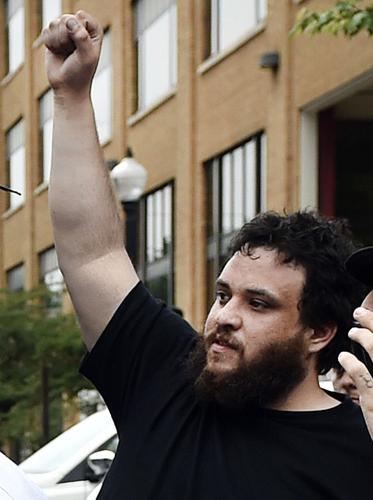 Jessica Lopez, left, and Dylan Davis, two of the three protesters who were arrested on Aug. 5, speak to media on Saturday, Aug. 8, 2020. Lopez talked about the planned protest for Sunday at 5 a.m.

A high-profile defendant from protests that turned violent in downtown Lancaster following a fatal September 2020 police shooting in the city is guilty of riot and related offenses.

Davis, 30, of Lancaster opted to have Spahn, rather than a jury, decide his case. Spahn heard evidence in the case Thursday.

“Well, I guess I’m going to prison then,” Davis said after leaving the courtroom. He declined to comment to a reporter based on his attorney’s advice.

On Facebook in the early afternoon, Davis posted, “I don’t really know what happened or what to say. I know I am innocent. I know the system is and has been broken. I know I will keep fighting and I know I love each and every one of y’all.”

Spahn will sentence Davis after a presentence investigation is completed; a date has not been scheduled. Riot is a third-degree felony punishable by up to seven years in prison.

Davis' attorney, Stephen Grosh, said, "My client and I are, of course, disappointed with the outcome; with that said, we appreciate Judge Spahn took the time to explain his analysis and ruling. ... This has been a long process for Dylan and he is anxious to move forward in his life with all that he has learned and endured these last few years.”

Davis was one of about a dozen people arrested after the shooting here of Ricardo Muñoz, 27, outside his Laurel Street home on Sept. 13, 2020. Muñoz's shooting was later determined to have been justified.

Spahn said Davis was present for several hours outside the city police station, where protesters set fire to a dumpster at Prince and Chestnut streets, and was in the middle of the crowd of people who clashed with police at a ramp to the station.

“His action did in fact encourage the rioters,” Spahn said of Davis.

After Monday's hearing, Grosh said, "We will now transition to the sentencing phase of this case, which will occur sometime soon. This has been a long process for Dylan and he is anxious to move forward in his life with all that he has learned and endured these last few years.”

Davis’ case, and that of about a half-dozen other people charged with riot and related offenses after Muñoz's shooting, drew criticism from civil rights and criminal justice reform groups — including Lt. Gov. John Fetterman and the American Civil Liberties Union of Pennsylvania — who said the severity of what the defendants were accused of did not justify District Judge Bruce Roth setting their bail at $1 million.

Roth subsequently lowered Davis’ bail to $50,000 and lowered bail for the others charged as well. Davis spent three three days in jail.

Davis previously pleaded guilty in two other protest-related cases from 2020. One of the protests concerned a plan to redevelop the former St. Joseph’s Hospital property into a mix of housing and retail.

In both cases, Davis was charged with obstructing highways. He pleaded guilty in August 2021 and was placed on probation for one year.

Shortly after George Floyd was killed, Davis wrote a column for LNP|LancasterOnline about his protest experiences.

A handful of defendants charged following the Sept. 2020 protests are still awaiting resolution of their cases.

Lopez is charged with felony riot and vandalism charges, as well as protest-related misdemeanors, related to the protests after Muñoz's shooting.

Her trial was scheduled to begin Monday.

Modderman, an LNP | LancasterOnline client services representative, is charged with blocking traffic and related offenses. He is scheduled for a non-jury trial Dec. 6.

Enterline and Patterson are charged with riot, failure to disperse and related offenses. They have court appearances scheduled Dec. 30.

Espinosa, who is also charged with riot, failure to disperse and related offenses, is scheduled for a non-jury trial Feb. 2.

Of the cases that have been resolved, the most significant sentence imposed to date involved a man convicted of destroying two vehicles, smashing windows at the Lancaster police station and downtown post office, and causing other damage after Muñoz's death.

Christopher Vazquez, 33, of Lancaster, is serving 4-⅓ to 9 years in state prison. He pleaded guilty in March to two counts each of riot and reckless burning — both third-degree felonies — two counts of disorderly conduct, four counts of institutional vandalism and one count of failure to disperse. He was sentenced in May.

This story has been updated to reflect more arrests announced by Lancaster Bureau of Police,…

3 from spring Lancaster city protest enter pleas to obstructing traffic, another to stand trial on the charge [update]

The kids on the stoop are changing the world [column]

When I came out to protest the police killing of George Floyd, I was hurting. I wanted to ye…

A chain reaction crash in West Cocalico Township on Monday afternoon ended with a car in a house and a resident injured, police said.

A Reading man died in a crash on the Pennsylvania Turnpike in Elizabeth Township on Saturday.