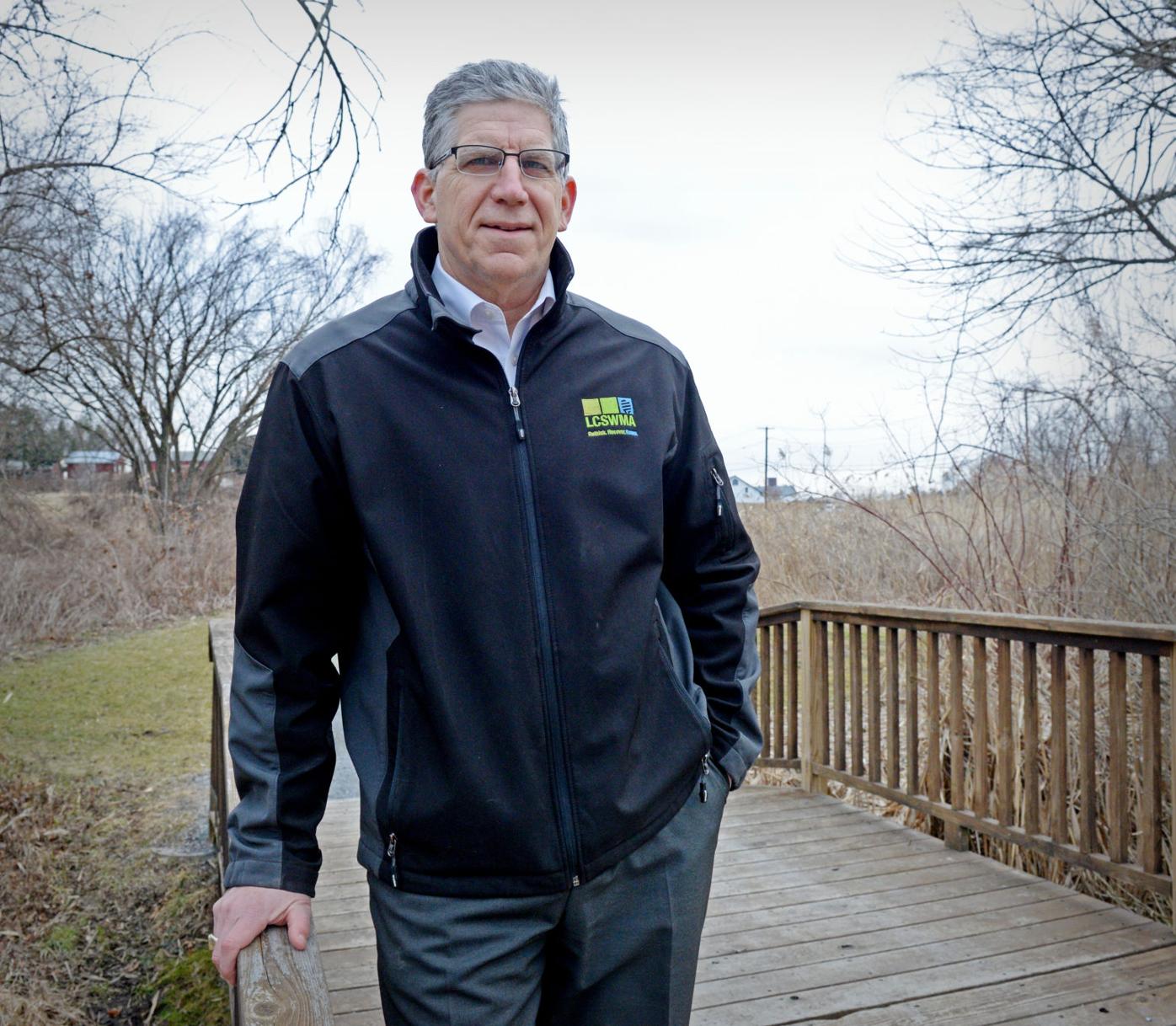 James D. Warner, chief executive officer of the Lancaster County Solid Waste Management Authority, stands on a bridge along the Farmingdale Trail in East Hempfield Township that the authority built for the community. 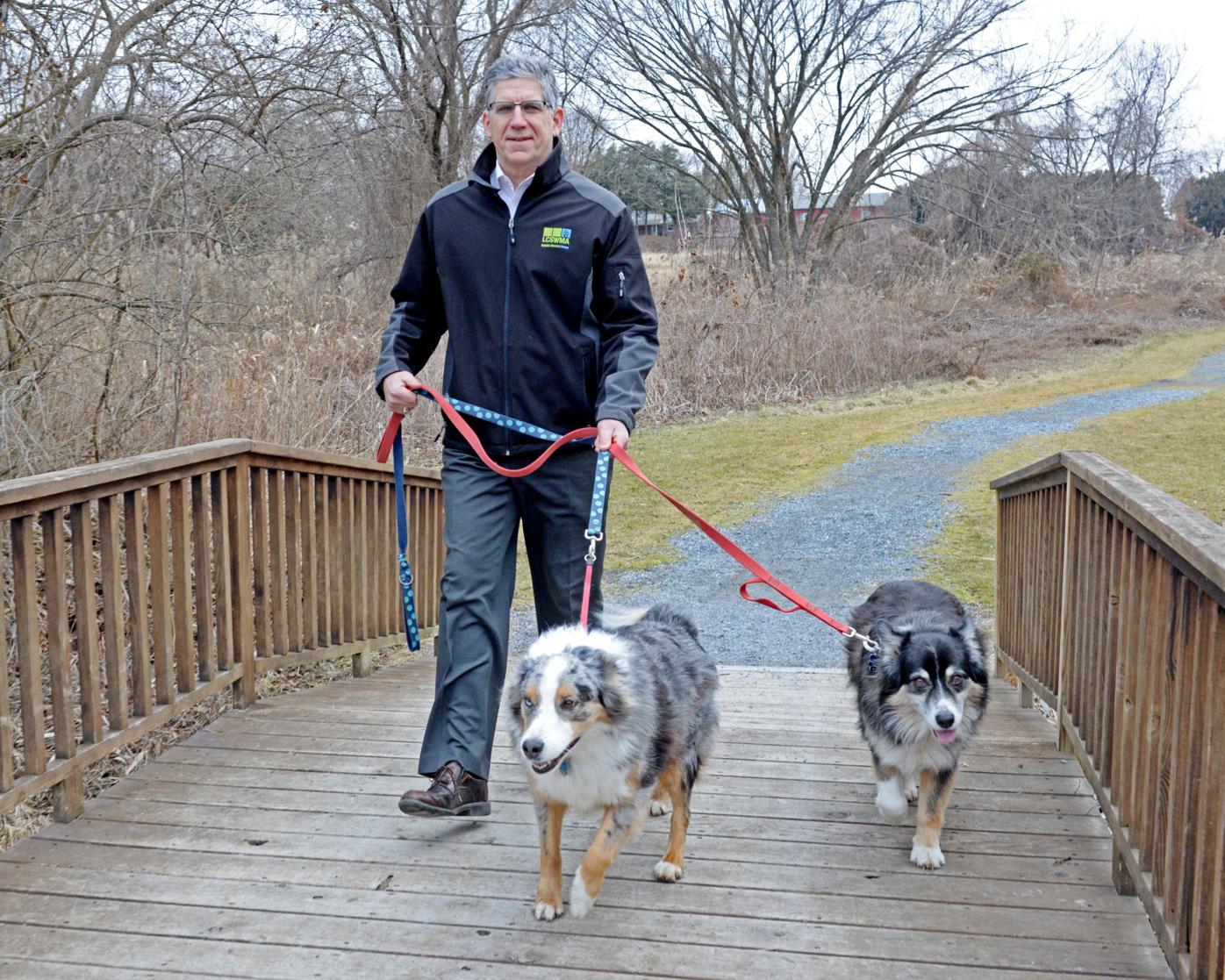 James D. Warner, who transformed the county’s waste authority into a national model, expanded its renewable energy footprint and insisted on building quality-of-life projects in the communities it impacts, is stepping down at the end of the year.

“How many other executives get the opportunity to protect the environment, build a renewable energy portfolio and build some cool trails along the way? Not very many, and it’s been very special,” Warner says.

The forceful frontman for the authority, which operates under an $85 million budget, is receiving grateful praise from county officials and community leaders, who call him an innovator.

“The board and staff, with Jim’s leadership, have built a world-class organization,” Lancaster County Commissioner Craig Lehman says. “Whether it’s keeping tipping fees stable, creating a regional organization, converting waste to energy, reducing the authority’s carbon footprint or wisely investing in our community, Jim, the board and the staff have accomplished much.”

“He is extremely community-minded, and he is an internationally recognized innovator in his field,” Millersville University President John Anderson says. The authority helped fund a “zero energy” building for the university.

Warner was hired by the authority in 1987 to launch countywide recycling.

That went well. The county far exceeds state and national recycling rates, and that has helped extend the life of the Frey Farm Landfill by about 20 years.

In 1996, Warner took over from Herb Flosdorf as the head of the body responsible for safely disposing of Lancaster County’s growing waste, and he immediately implemented policies to achieve his goals.

His first major initiative was to put the authority on firmer financial footing.

He cut staff and recruited out-of-county generators of special industrial waste for lucrative use of the county’s waste-to-energy incinerator.

That effort resulted in a more favorable credit rating and refinancing of more than $150 million in obligations that reduced the authority’s debt payments by $8 million a year.

Warner, whose annual salary is $218,000, was determined to avoid having to raise tipping fees — the dumping fees trash haulers have to pay that are passed back to residents through their trash bills.

With a board buying into his vision, Warner leveraged the authority’s assets with a series of creative projects.

— Methane gas burned off at the county landfill was harnessed and used to produce enough power for 2,400 homes.

— The authority took a gamble in purchasing Harrisburg’s cash-strapped, violation-prone trash-to-energy incinerator and has turned it into a moneymaker, Warner says.

Today, tipping fees for haulers are 20 cents less than what they were more than 20 years ago.

There is more yet to come. An ash-recycling plant about to be constructed at the landfill will recover metals from ash at the Lancaster County and Harrisburg incinerators. The authority gets a percentage of the revenue from the sale of those metals and is making more money from an authority-backed loan for the project.

Warner is proud of the authority’s environmental record in waste disposal.

— The Frey Farm Landfill is the only municipal landfill in Pennsylvania not to receive a violation notice from the state in the last 25 years.

— The county has the only free drive-through household hazardous waste facility in Pennsylvania, according to the authority.

— The trash transfer station is festooned with solar panels that generate electricity.

“We have taken society’s discards and protected the environment, and we have to do it every day,” Warner says.

“I’m very proud of the way our facilities look, the way they operate.”

But he says he is most proud of the authority’s very conscious decision to give back to the communities impacted by an incinerator, landfill, truck traffic and waste transfer station.

— When studies showed trash trucks made up one-third of the truck traffic driving through Columbia Borough, the authority financed one-third the cost of a study for a new bypass.

— When soil was removed from a farm next to the landfill in Manor Township, the authority was obligated to leave it as open space. But it went one step further and spent $1.2 million to turn it into a community park whose trails draw people from a wide area, including bird-watchers.

— The authority has provided financial and logistical support for the Northwest Lancaster County River Trail — which has become one of the most popular trails in the county — and its Columbia Crossing River Trails Center in Columbia.

— In East Hempfield Township, the authority could have sealed off an old landfill with environmental problems, but instead built the Farmingdale Trail for public use.

The authority also has invested heavily in Lancaster city and nearby areas. It built its handsome transfer station with building materials to match the city’s historical past, provided land to move a railroad switchyard so Franklin & Marshall College could expand its campus and has supported city-based nonprofit groups.

Warner has “put in countless hours to strengthen key organizations such as the Economic Development Company of Lancaster County, the Pennsylvania College of Art & Design and the Lancaster City Alliance,” says EDC President Lisa Riggs.

“He also has integrated LCSWMA into the community as a partner in ways that may not be as a ‘usual suspect,’ ” she says.

Another of the authority’s financial beneficiaries has been Susquehanna Heritage, the nonprofit that promotes eco-tourism along the lower Susquehanna River corridor.

“So many of the recreation and heritage attractions along the river exist thanks to Jim’s support through the authority,” says Mark Platts, president of the group.

“He’s leaving Lancaster County and the Susquehanna Riverlands a better place than he found it — the best legacy of all.”