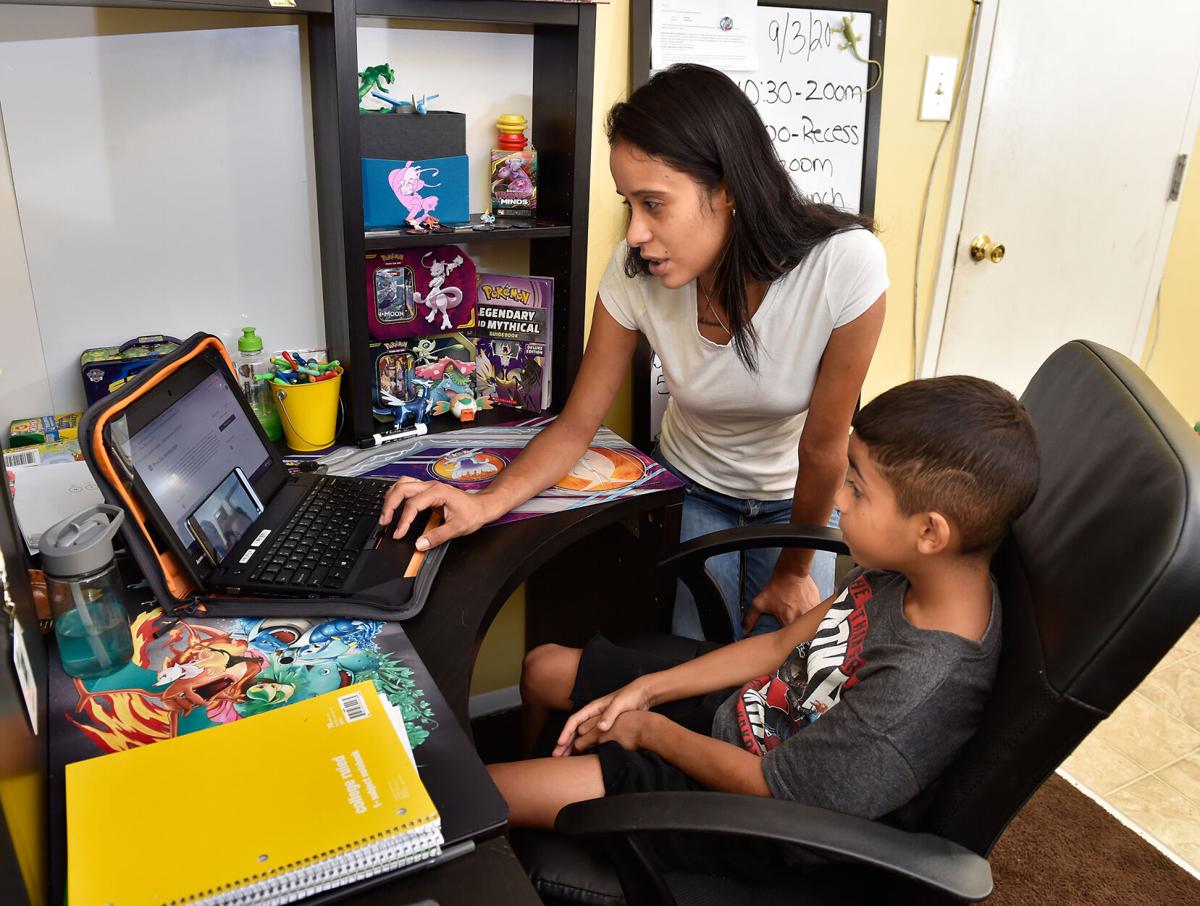 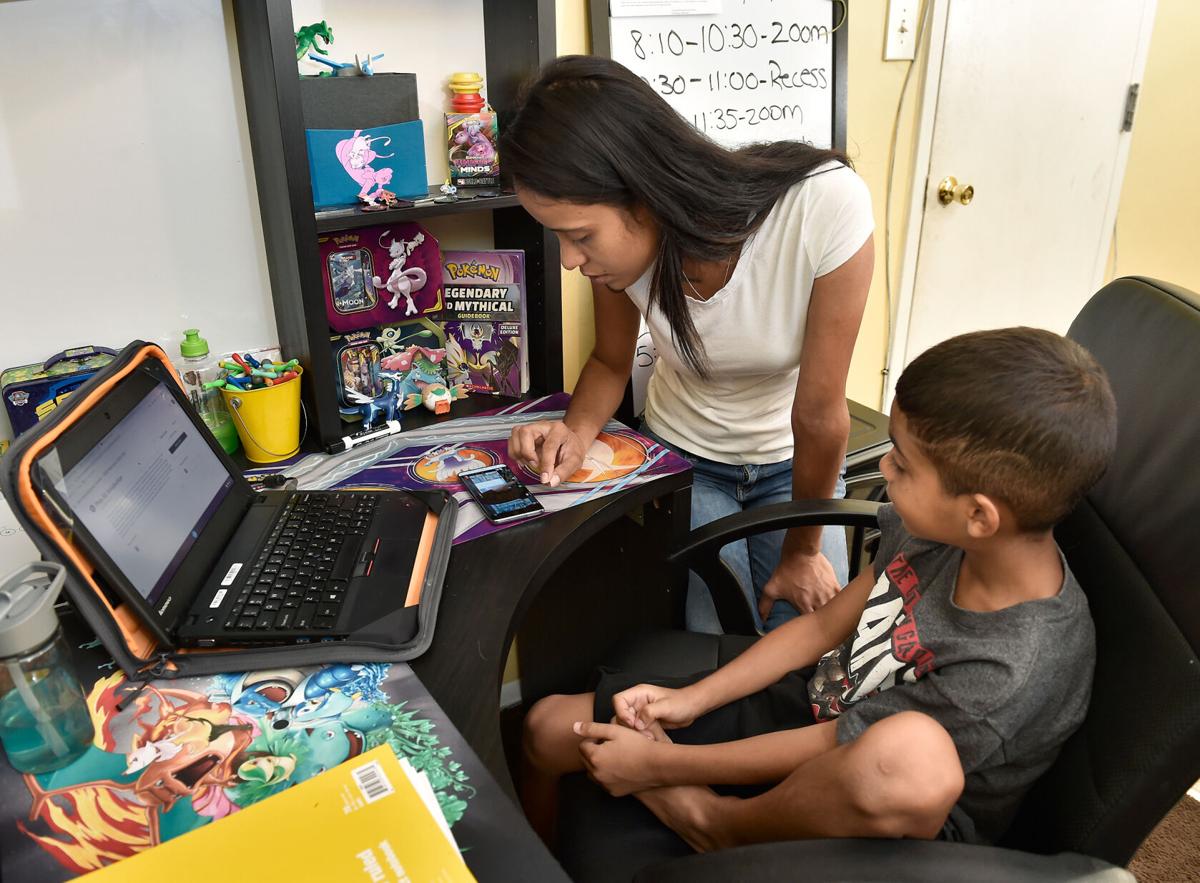 Leo Maldonado, 7, tries to learn remotely while his mother, Natiana Mendez, works to connect to the zoom meeting on Thursday, Spetember 3, 2020. 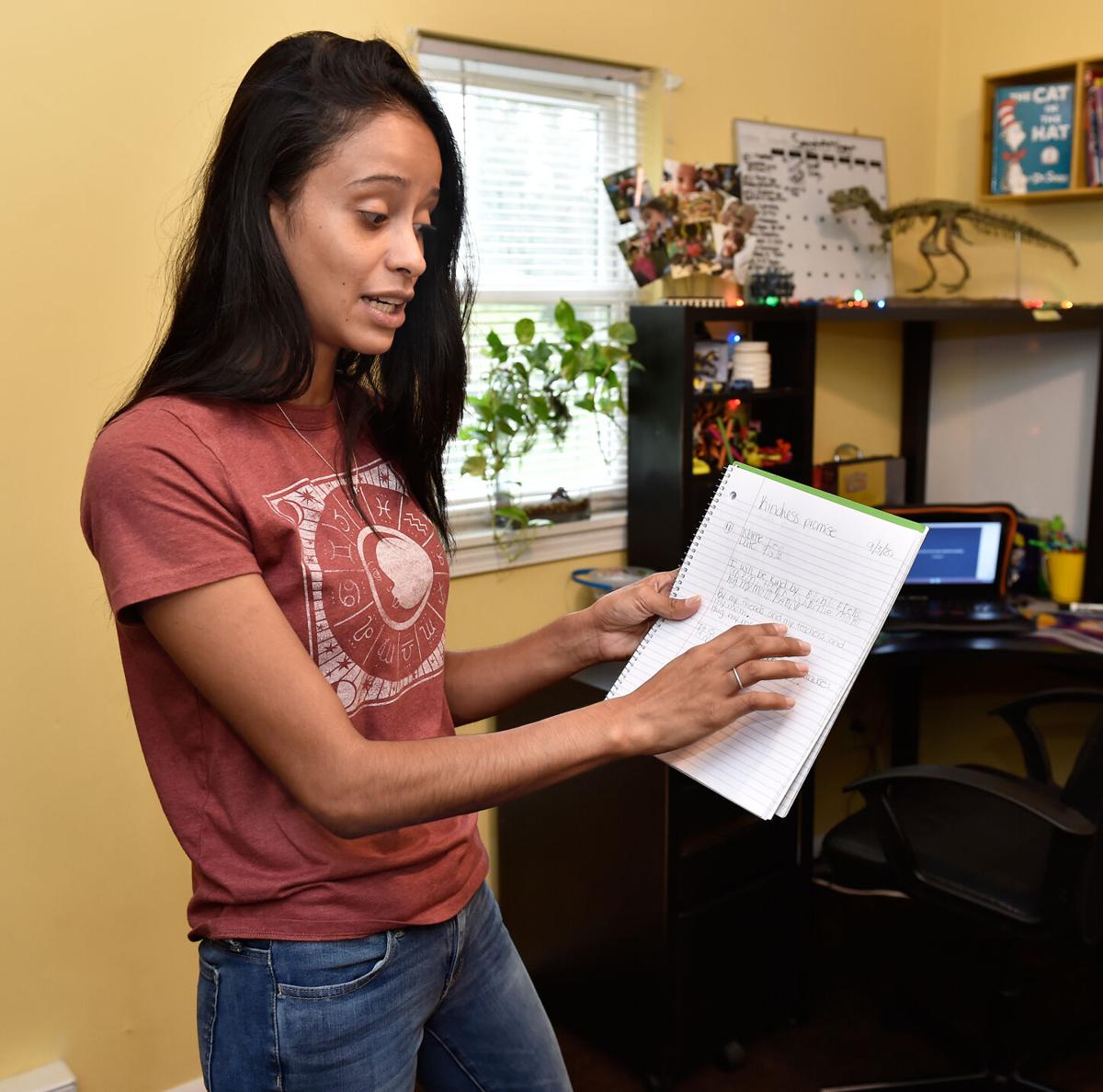 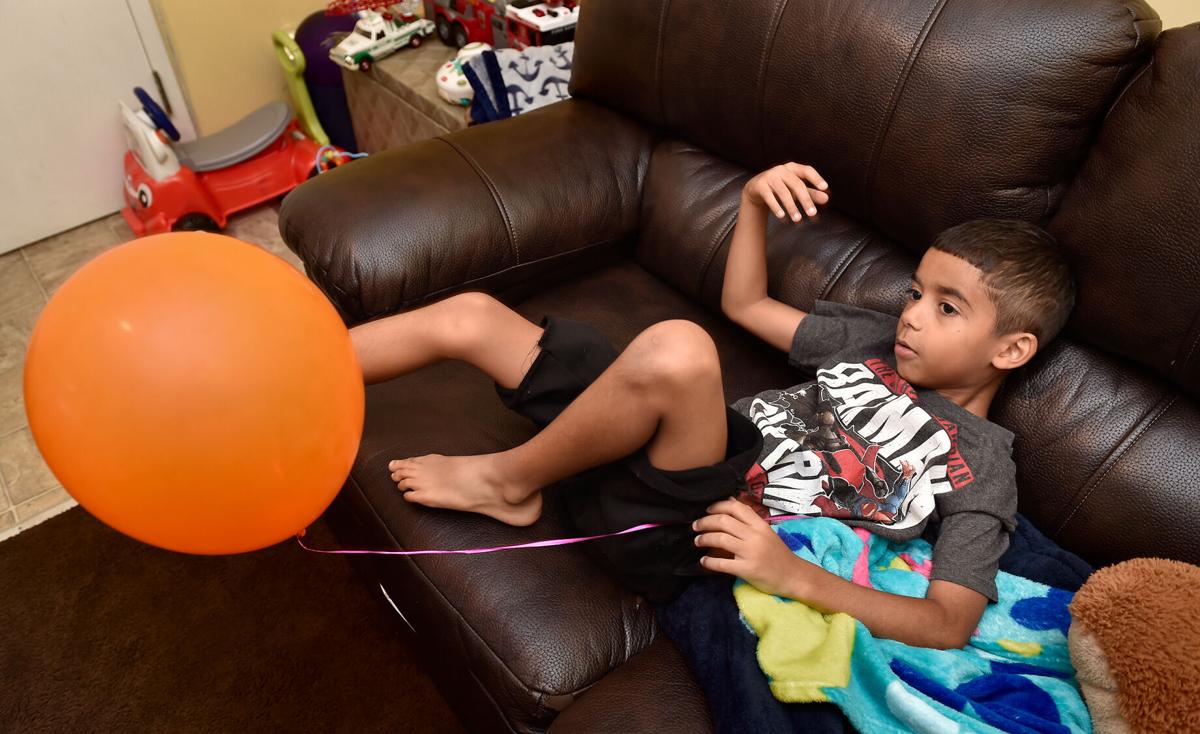 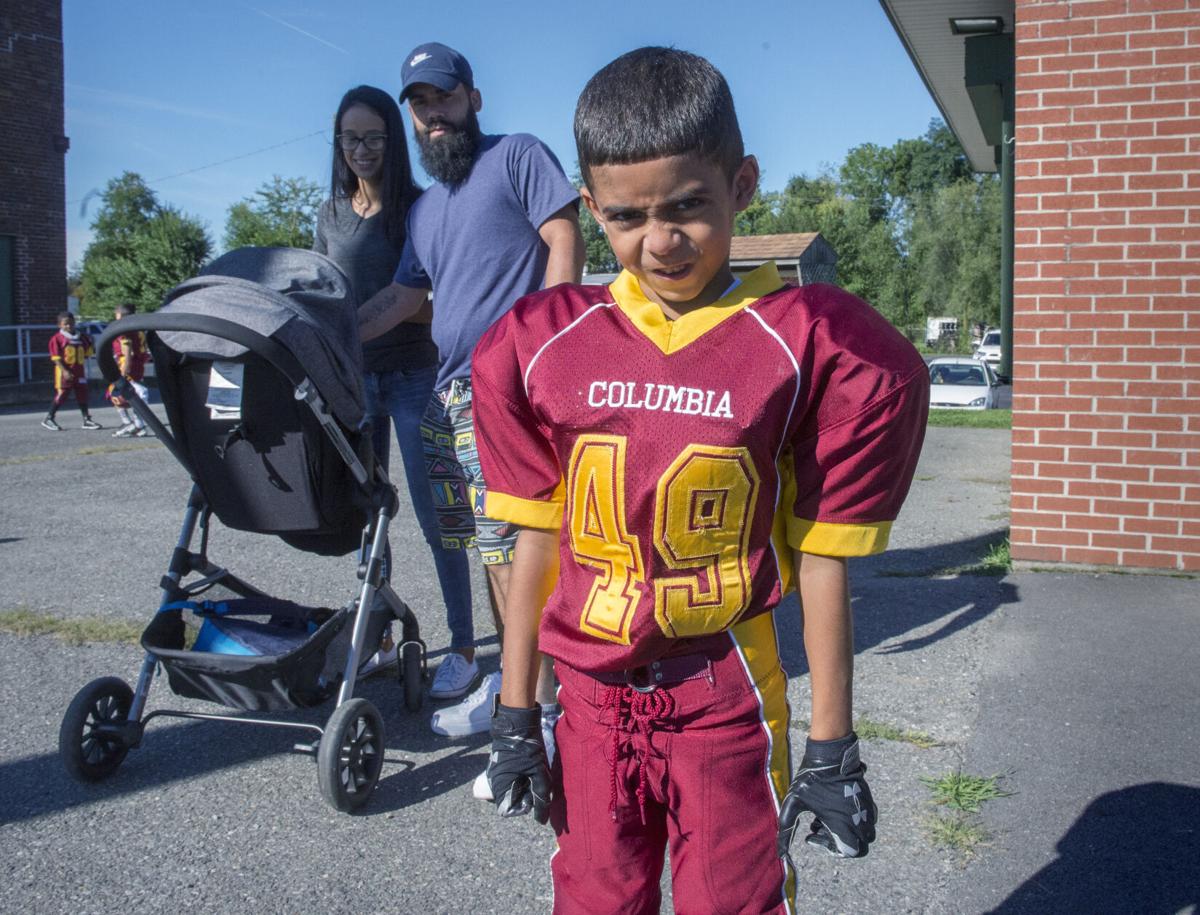 Seven-year-old Leo Maldonado shows his game face before his football game in Columbia on Sept. 5, 2020. Behind him are his mother, Natiana Mendez, and her boyfriend, Robert Lopez. 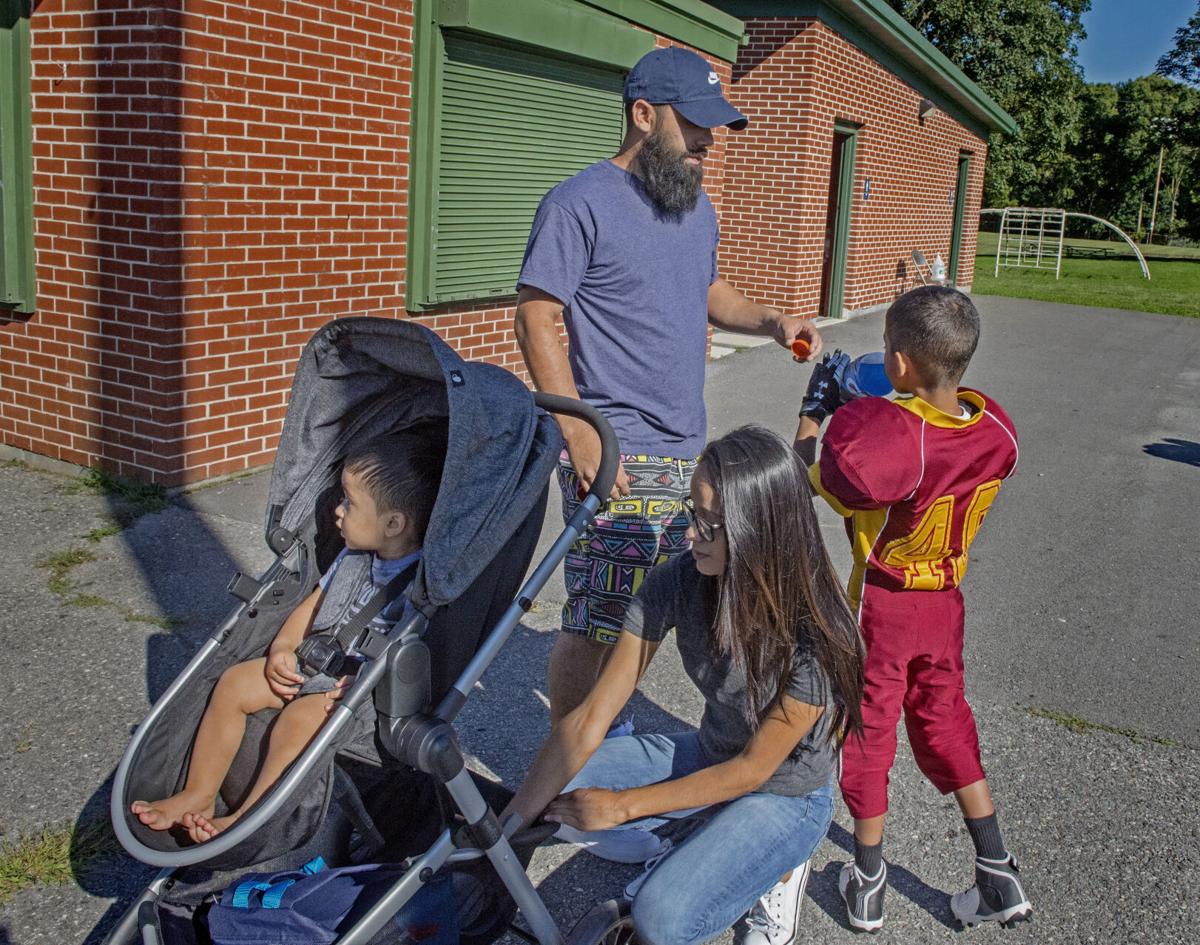 Natiana Mendez grabs an item from a stroller holding her son, Joey. Robert Lopez helps 7-year-old Leo Maldonado before his football game in Columbia on Sept. 5, 2020.

Leo Maldonado, 7, tries to learn remotely while his mother, Natiana Mendez, works to connect to the zoom meeting on Thursday, Spetember 3, 2020.

In better times, Natiana Mendez enjoyed engaging with customers as a sales associate for T-Mobile.

Slim and personable, Mendez, 26, has been told more than once that she could sell ice to an Eskimo.

But six months into the pandemic, she feels trapped and depleted.

Unemployed since mid-June, Mendez, of Columbia, has been staying home with her sons: 19-month-old Joey Lopez and 7-year-old Leo Maldonado, a second-grader she tries to keep on task for online instruction.

Her boyfriend, Robert Lopez, 35, brings home erratic wages from trimming and felling trees while she looks for work.

Unable to pay this month’s $950 rent, the couple applied for the federal CARES Act rent relief program. And Mendez recently joined a line of cars at a food giveaway in Columbia, taking home eggs, milk, peanut butter and other pantry staples, and sacks of frozen chicken and pork patties.

Meanwhile, Mendez goes no further than the driveway to visit her 59-year-old father because poor health heightens his risk if he gets the coronavirus.

“It’s hard in every area of life right now,” she said.

Half a year into the worst public health crisis in a century, COVID-19 continues to cast a shadow as the days get shorter and the leaves turn.

Lancaster County tacks on 30 or more cases daily to the nearly 7,500 already confirmed. The death rate climbs more slowly now, but at least 424 have died, mostly the frail and elderly. Unemployment remains its highest here since the Great Depression. And now the flu season is approaching.

Readers respond: How has the COVID-19 pandemic changed your life?

“No more going outside, no holidays, no family gatherings,” Mendez said of the coming months. “I try not to think about it.”

In the backdrop of Mendez’s life is the specter of sickness and medical bills. But it’s the isolation and cratered economy that is front and center.

Mendez speaks for many others.

The year started with promise.

Mendez was making $3,500 a month selling cell phones and services in Lancaster, and Lopez was a manager at a T-Mobile shop in Columbia.

Mendez loved the work and her employer. Best of all, the couple could afford an attractively furnished two-bedroom home, a German shepherd named Kobe, frequent dinners out, and fun times at Hersheypark and Ocean City, Maryland.

“We had so much going for us,” said Mendez, who was contemplating a career in real estate.

But then Lopez’s shop changed hands last winter, and his wages were cut while his responsibilities increased. He left while still looking for a new job.

When the pandemic hit, Lopez was out of work. He landed a job in June cutting down trees.

Meanwhile, T-Mobile reduced Mendez’s schedule to 10 days a month, the first of many indignities she had to roll with as the pandemic became the way things are.

Since July, making ends meet has been a struggle.

The Rev. David Powers of Columbia Presbyterian Church and its Hands Across the Street poverty relief initiative, which ran the recent food giveaway, said everything has gotten worse during COVID-19 for people living paycheck to paycheck.

“A lot of times people feel like they’ve run out of chances,” Powers said. “Here they are at the edge of the river, and where do they go from here?”

“Is coronavirus still around?” 7-year-old Leo will ask his mother. “Why?”

Instead of putting on a backpack and walking to school, Leo logs onto a school-provided laptop at a desk in a small room with terrariums containing a leopard gecko and a ball python.

Mendez decided to keep Leo home as a safety measure, and she set up a workstation for him that includes a whiteboard and calendar.

She also laid down the law. Leo must shower, put on a nice shirt, eat breakfast and be at his desk at 8:05 a.m., the same time as his peers entering their classroom at Park Elementary School.

“I don’t want him to think that he can slack,” Mendez said.

On a recent Thursday after a break, Leo returned to his laptop. He could see his teacher talking in the classroom, but couldn’t hear her. (The teacher requested that she not be identified in this story.)

Mendez emailed the teacher about the problem and then talked to her via Zoom on her smartphone. Leo started kicking a balloon around.

The teacher told Mendez that the laptop’s audio problem wasn’t from her end and that she would send her a link for the tech department.

“If anything, I’ll just let him use my phone,” Mendez replied. “We’ll try to figure it out.”

Technology glitches only heighten Mendez’s concern that her active son is going to fall behind.

“I do not feel my son is going to be good with this,” she said. “He just gets too distracted.”

“Like, I have no degree in this,” she added. “I’m scared. Really scared. I feel his progress is going to be really slow or it’s not going to happen at all.”

On a bright Saturday morning at Glatfelter Field in Columbia, Leo arrived in pads and a crimson-and-gold uniform for his first football game.

With Manheim Township players warming up at the other end, Leo donned a helmet and lined up with the 15 members of his team for tackling drills.

“Leo, go low!” Lopez yelled from the sideline. Leo collided with a larger teammate, grabbed a leg and was dragged a couple of feet.

While keeping an eye on Joey in his stroller, Mendez watched Leo, but not as intently. She knows football poses a risk.

“But I have to give my son a normal experience,” she said. “I cannot rob everything from him because of COVID.”

Summer had passed with no family vacation. Water balloon battles in the backyard and an occasional steaming pot of crabs were highlights. An outing with the children was walking the dog up the hill to run around the track at Columbia High School.

“It’s crazy because now this is our life,” Mendez said. “We’re used to being homebodies now.”

Mendez said that when she is out with Joey in a stroller she avoids people.

“I look like a crazy mom,” she said. “But I’m sorry — I’m going to be that crazy mom because no one is going to give my kid COVID.”

She worries, however, that the toddler won’t learn to socialize.

Anxiety has crept into Mendez’ life in ways she never imagined. Household arguments are more common. Some days bring more stress than she’s used to.

Celebrating recovery in the time of COVID

Mendez thinks back to how good things were before the pandemic. She misses going to conventions, mingling and introducing herself to the people who could boost her career.

Now her professional goals are on hold, the family’s savings are gone, and her children are missing the childhood she hoped for them.

“We have to make the best of it,” Mendez said. “We can’t allow ourselves to dip so far deep into COVID that it takes our sanity.”

'This virus is not fiction': How COVID-19 upended the lives of two local families

Family is important to Artemio Sr. and Ada Perales. The same can be said of Orlando and Nidia González.

Living in the time of COVID-19 [opinion]

Optimist that I am, I have been thinking a good deal about the Four Horsemen of the Apocalypse. Not the famed Fighting Irish backfield of the …

A volatile year in American race relations has spurred YWCA Lancaster to play a bigger role in working to end systemic racism here.

A shiny, blue balloon bobbed in the air Friday afternoon as 2-year-old Wyatt pulled on its string, circling past his brother, 1-year-old Leala…