Wake up a little earlier tomorrow morning and take your time during the morning commute.

A wintry mix of rain, sleet and snow could move into Lancaster County between 7 and 9 a.m., according to Millersville University meteorologist Eric Horst.

Horst said to use caution driving throughout the day. Be patient, drive slower and take more time to get to your destinations.

Although temperatures Tuesday will hover around the freezing mark and slowly rise throughout the evening, Horst said that doesn't mean colder spots in the county won't freeze over, creating slick spots on the roads.

"This is a tough storm to really nail down because it's a subtle, weak system and temperatures are marginal," Horst said. "If this storm comes in a degree or two warmer than I'm thinking, it might not be a problem at all."

Monday's warm temperatures might help out on Tuesday as the roads will be relatively warm, making it hard for frozen precipitation to stick to pavement.

The wintry mix should last into early afternoon, Horst said.

With temperatures slowly rising, precipitation should change over to a drizzle into the late day and evening hours.

Horst doesn't expect more than a slushy coating to accumulate. 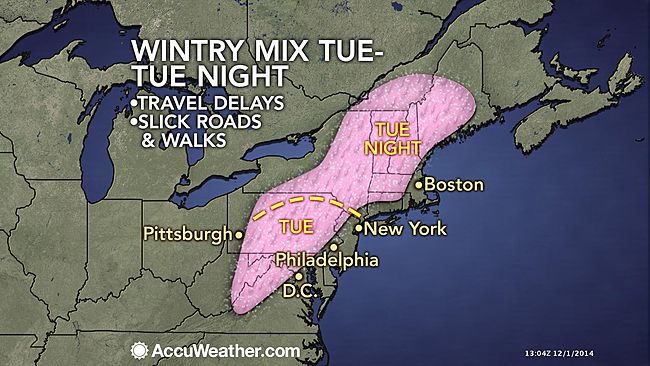 Wednesday, the temperature will shoot back up to the 50-degree mark.

Horst said he doesn't expect Tuesday's precipitation to be a problem for Wednesday's commute as daybreak temperatures should already be above freezing.

High temperatures through the end of the week will hover in the low 40s.

Another bout of snow and sleet is possible Friday morning.

Highs will creep back up toward 50 through the weekend.