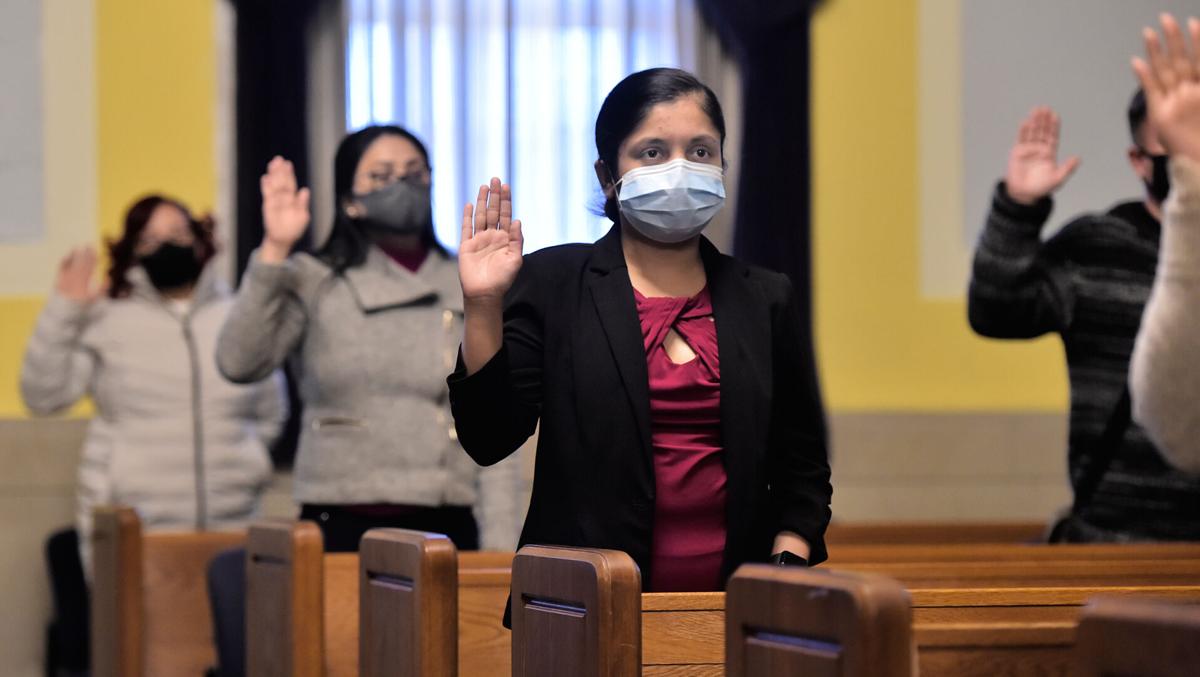 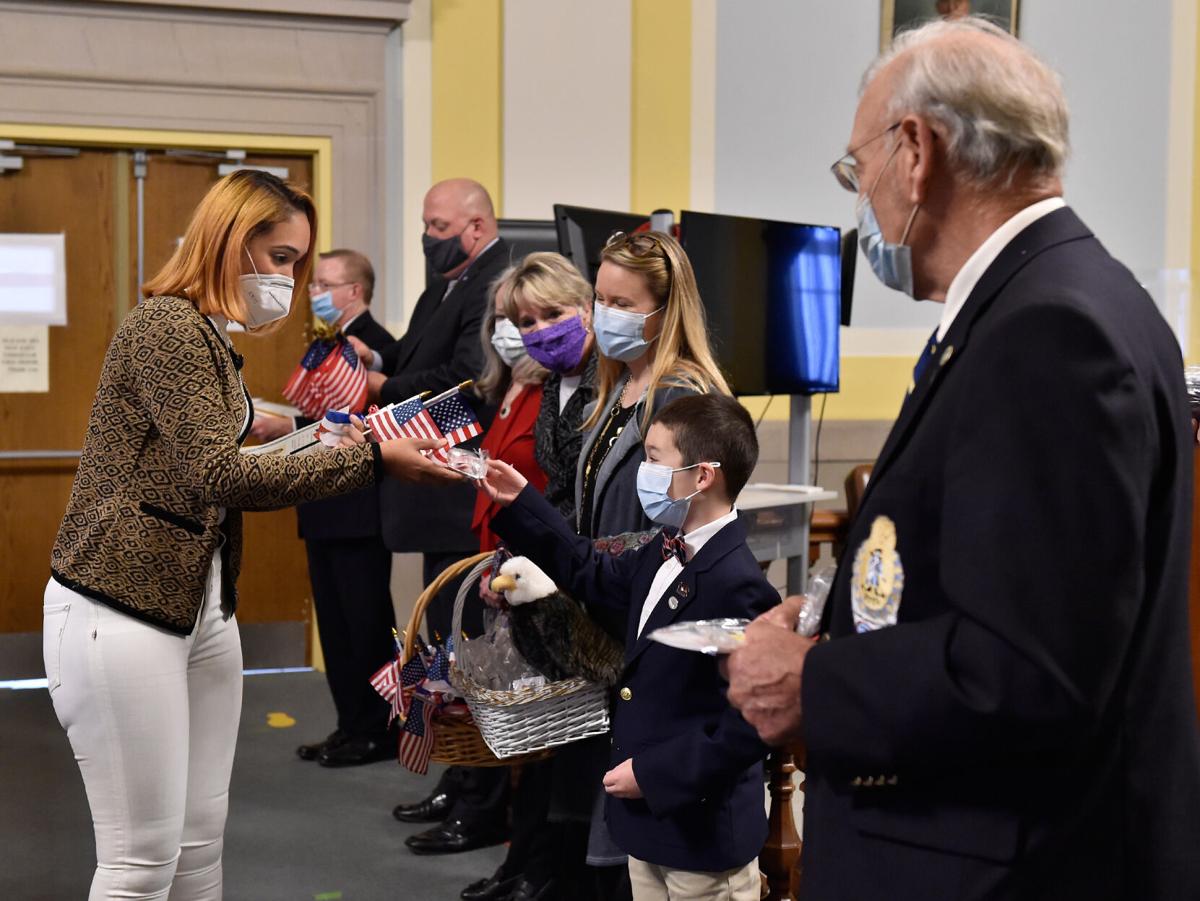 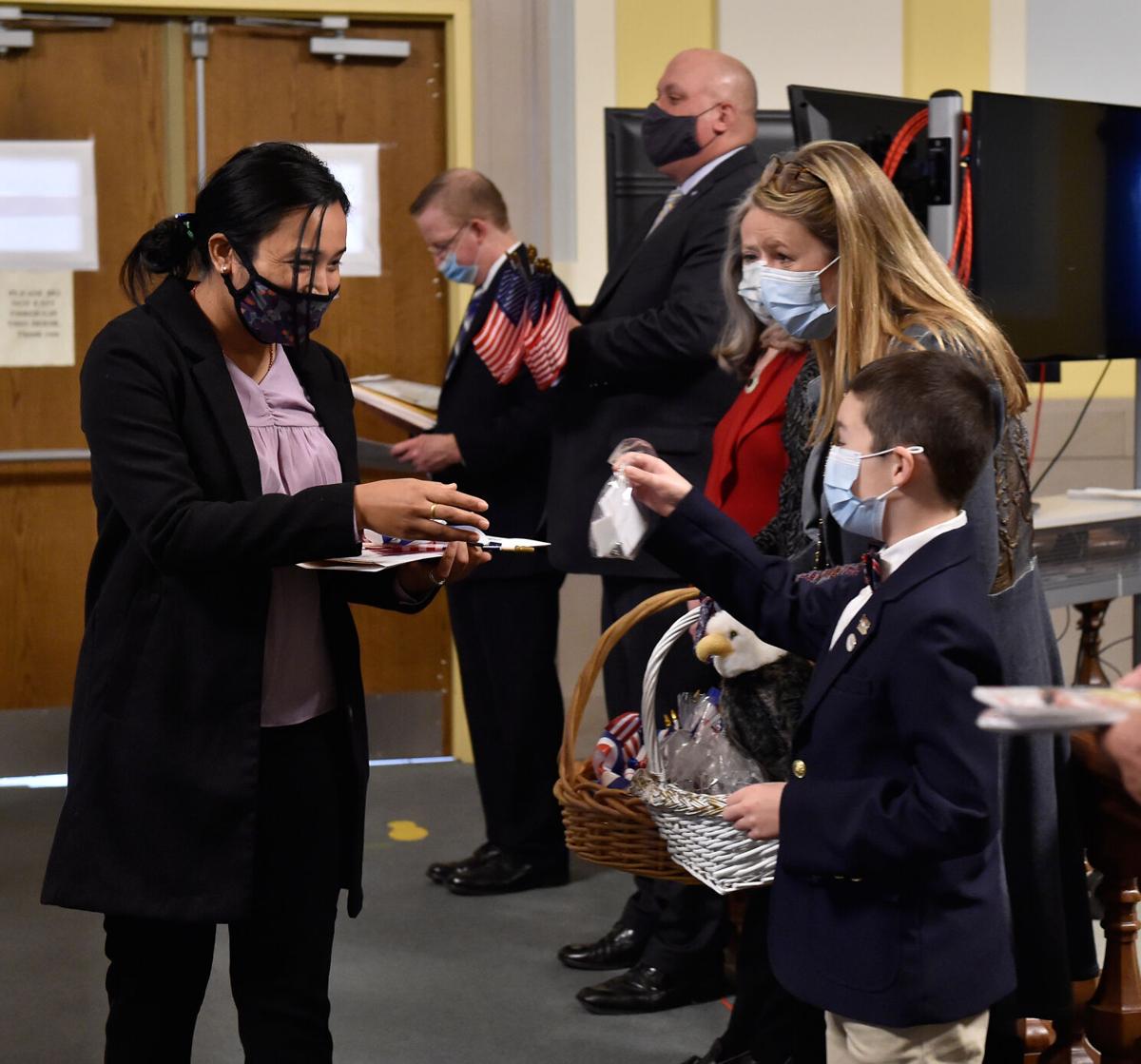 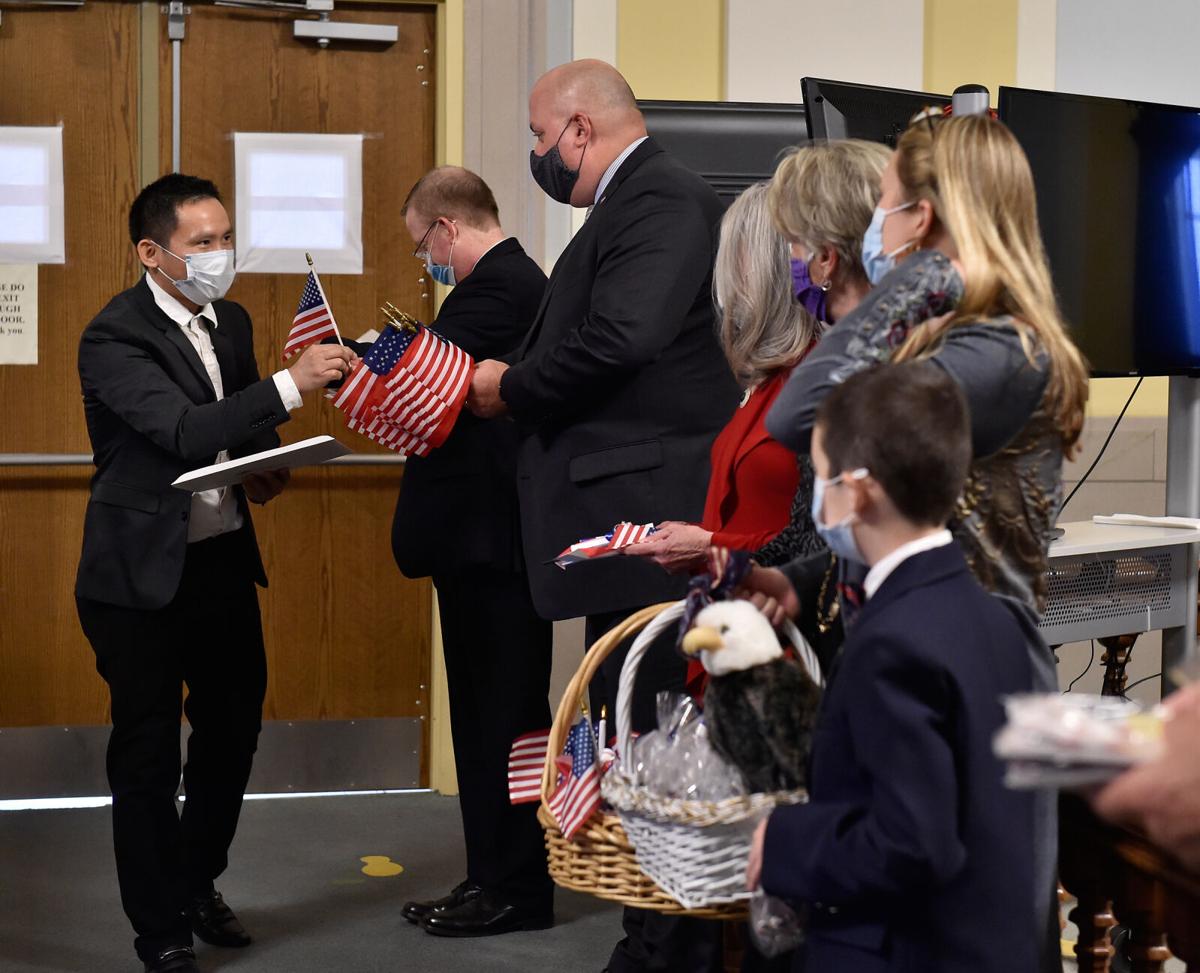 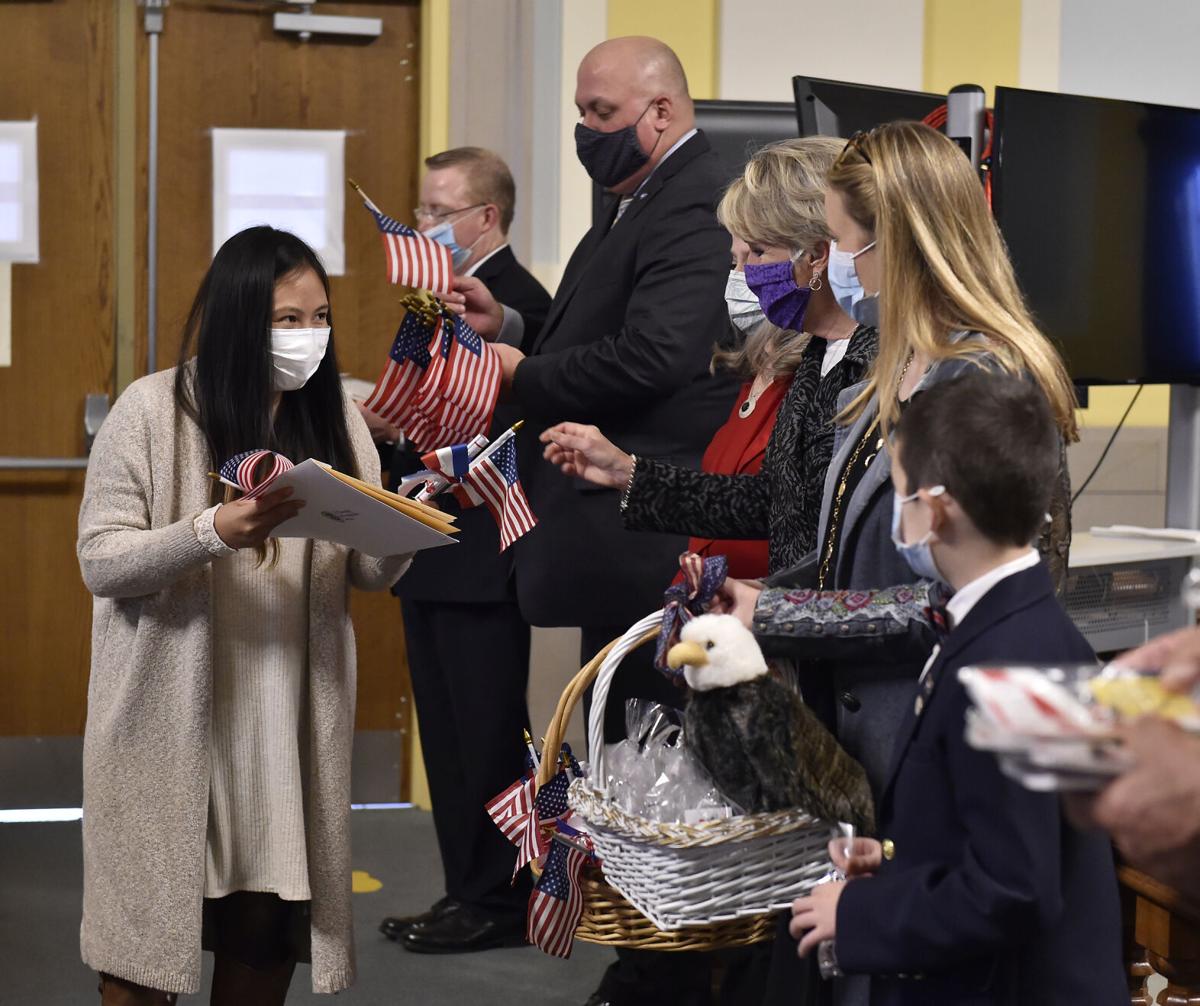 It was a moment of joy for 26-year-old Minisha Siwakoti.

Born and raised in a crowded Nepali refugee camp, Siwakoti became a U.S. citizen Friday, raising her right hand and pledging allegiance to the United States, which eight years ago gave her and her struggling family a new start.

The registered nurse joined 27 others from a dozen countries for back-to-back naturalization ceremonies in Lancaster County’s ceremonial courtroom, where bailiffs enforced social distancing and mask wearing. Siwakoti took the oath with a first group of 15. A ceremony for 13 others followed.

Each left with a certificate of citizenship and a handheld American flag.

Ryan McMinn of the Lancaster County Prothonotary’s Office said that number is down from 255 in 2019, 209 in 2018 and 200 in 2017, but he couldn’t say why fewer new citizens came forward. The pandemic did force cancellation of the April ceremony.

Immigrants and refugees generally must live in the United States for at least five years before applying for citizenship and passing the test.

In brief remarks, Lancaster County Judge David Workman congratulated the newcomers, telling them they are now citizens of a great country affording each rights and freedoms that "I believe cannot be found anywhere else in the world."

His welcome resonated with Siwakoti.

“We were citizens of nowhere,” she said of her early years in Nepal. Her parents belonged to a persecuted minority in the Himalayan kingdom of Bhutan. Before she was born, they joined a massive exodus. Between 1990 and 1993, over 100,000 sought refuge in eastern Nepal.

“My parents left property in Bhutan. They had nothing,” Siwakoti said. “It was really, really hard for us in Nepal.”

But that changed in December 2012 when the United States granted the family asylum. They landed in Boston and moved to Ohio.

Siwakoti came to Lancaster last year after marrying Dendu Neopaney, a fellow refugee who lives in Lancaster County. He was among several thousand who left Nepal’s camps to resettle here.

“I made a choice to become a U.S. citizen. That means I want to be a part of everything, which is our duty. I want the responsibilities and everything,” said Siwakoti, who completed two years of nursing training and works for a family medicine practice.

Rosenny Hernandez, 28, had a different journey, but expressed similar hopes.

“This is a special day for me,” said Hernandez, a Dominican Republic native who the U.S. granted entry in 2013 after her husband settled here. “I have better opportunities, a better life, and I want to be part of this country.”

She planned a celebration with special food.

“It’s a big deal to become a citizen of the United States,” said Hernandez, a mother of two who works as a home health care aide. “I love this country.”

Je Naw San Labya, 37, said some day he will tell his children, ages 7, 5, and 2, about the persecution he fled as a minority in Burma, about his three years in a Malaysian camp and about his happiness on becoming a free U.S. citizen.

He said he will also tell them about the obligations of citizenship.

“We have a responsibility to respect the law of the United States and the Constitution,” said Labya, a machine operator in Bird-in-Hand. “We have to defend this country.

As Baltimore Ravens climb to their feet, reasons for playoff optimism remain