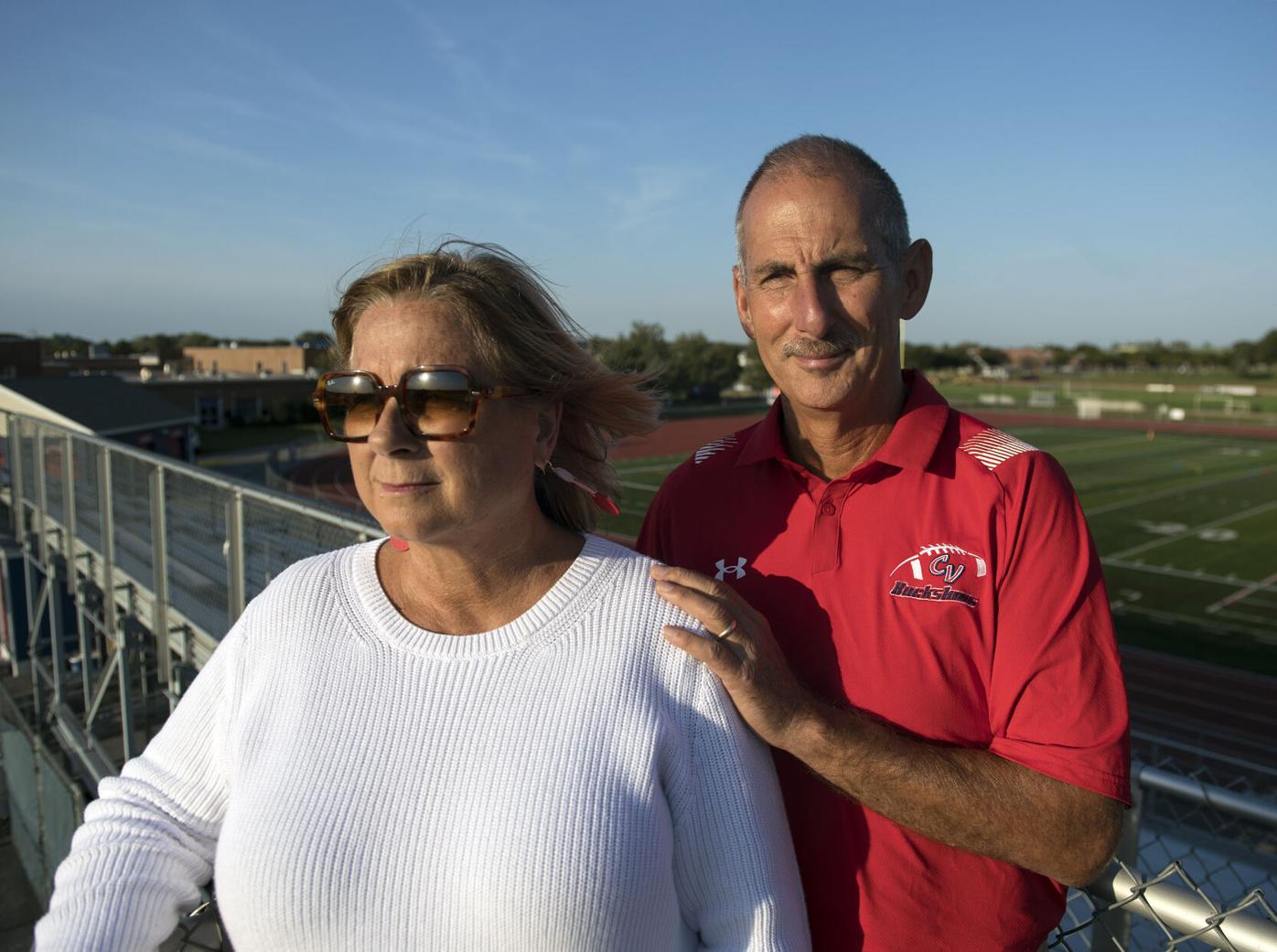 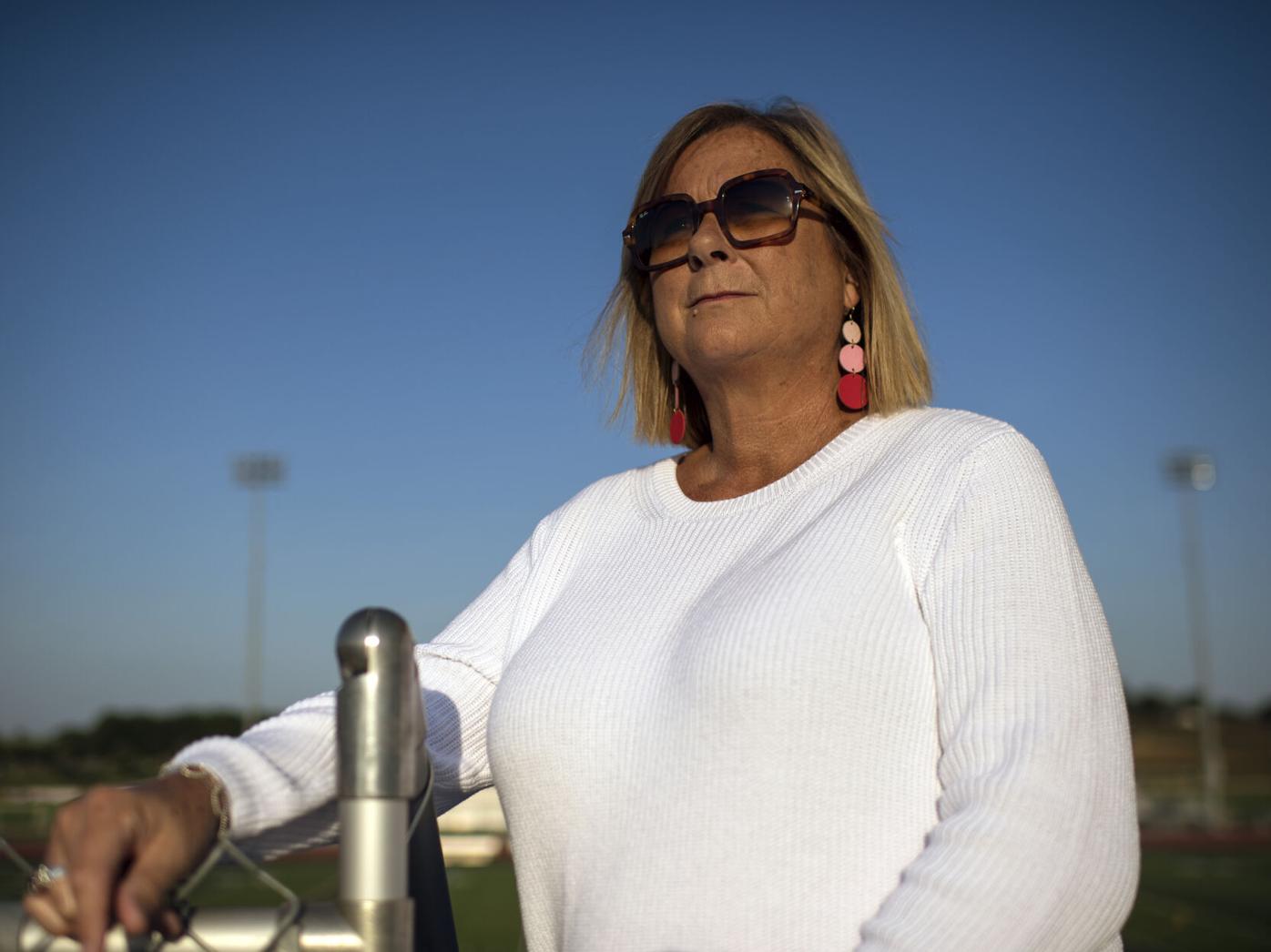 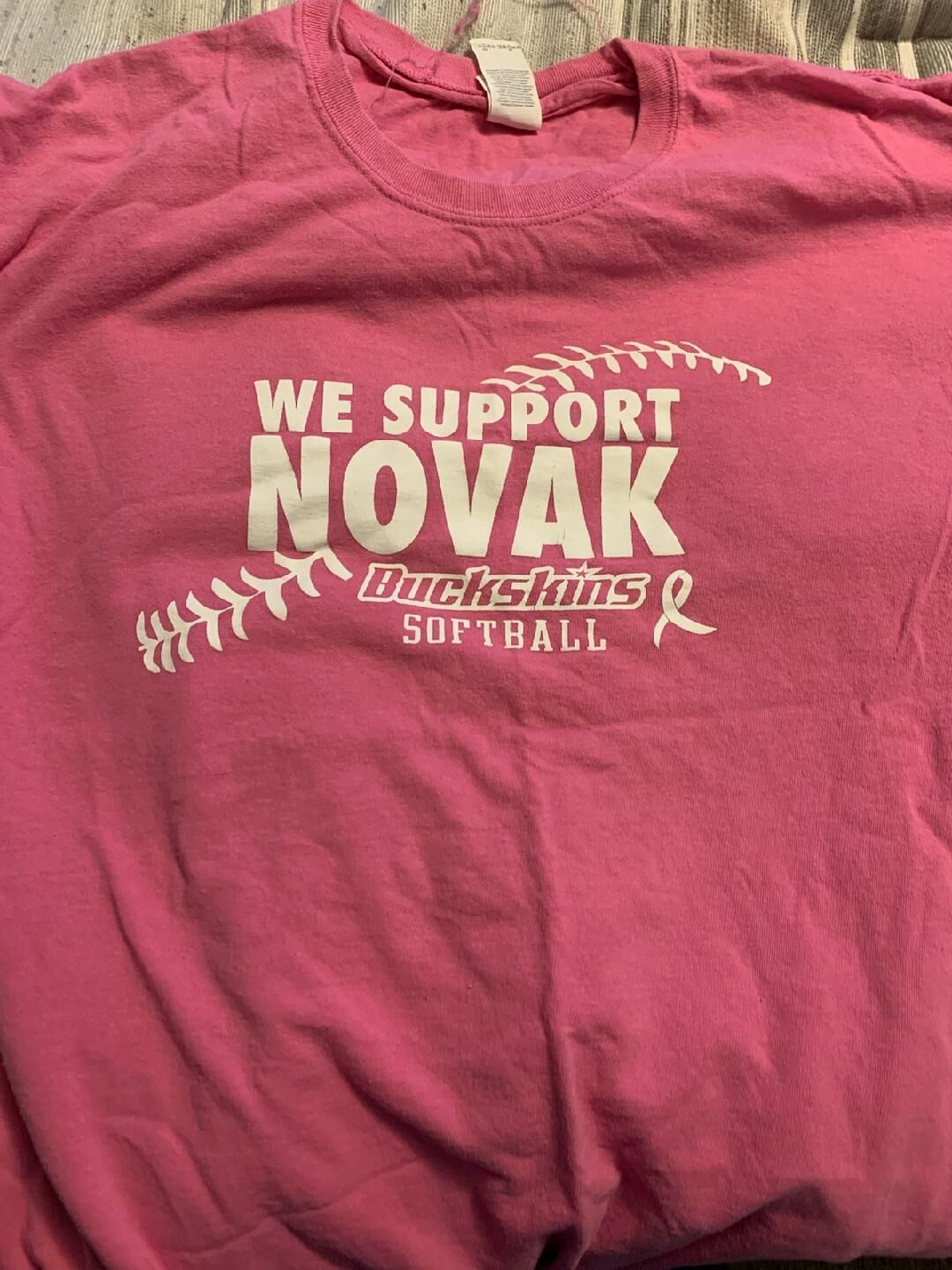 In May 2017, Smoketown Elementary School teachers wore pink shirts emblazoned with the words, "We Support Novak." 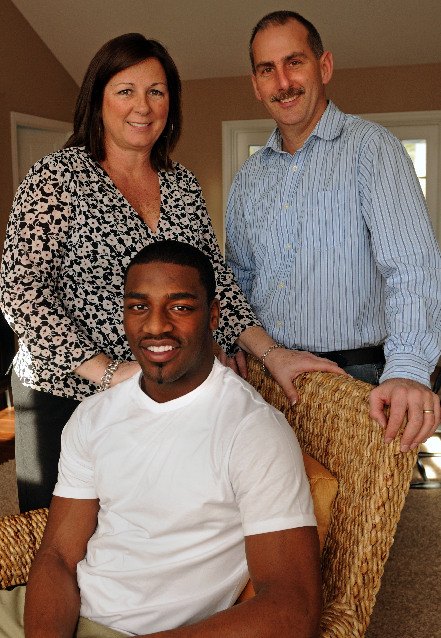 Kevin Kelley and his legal guardians, Gina and Gerad Novak, at the Novaks' home in Witmer. (Jeff Ruppenthal/Sunday News)

Kevin Kelley and his legal guardians, Gina and Gerad Novak, at the Novaks' home in Witmer. (Jeff Ruppenthal/Sunday News)

Elementary school teachers sometimes share their students with other teachers in the same grade level at points throughout the school year.

Gina Novak wasn’t one of them. She preferred, “to teach everything to my students all day.”

“That’s what I loved most about my job,” said Novak, who was a fourth grade teacher at Conestoga Valley’s Smoketown Elementary School for 33 years before retiring in 2021.

Novak took similar care with her students in April 2017 when breaking the news to them of her breast cancer diagnosis.

“I just have a little bit of cancer in me,” Novak recalled telling her students. “But it’s going to be fine. I’m going through treatment. So you’ll notice my hair is different.”

Novak shaved off her brown, shoulder-length hair shortly before her second round of chemotherapy. She preferred wigs in public setting. She wore them in school so her students wouldn’t be concerned about her health.

“Because they notice everything,” she said.

This month will be the four-year anniversary of Novak finishing treatment. She still remains cancer-free.

A former star athlete and longtime coach, Novak is also the wife of longtime CV football coach Gerad Novak. While she prefers to stay out of the spotlight, Novak is sharing her breast cancer story in hope it might help others.

“My attitude in life is when there’s a problem, you’ve got to attack it,” Novak said. “I told my students that, too. ...Cancer is a scary thing when you hear that word. I know mine could have been worse. There are people that have worse cancers than me. I consider myself one of the lucky ones.”

'It's disbelief and shock'

General guidance for when women should begin getting mammograms is between ages 40 to 45.

Novak, 60, has been following this guidance since her 40s. She was 56 when her mammogram in January 2017 revealed a tiny mass in her left breast. The mass was a little bit smaller than a pea in diameter. An ensuing lumpectomy led to a pathology test.

All the health systems in Lancaster County offer mammograms. The exams can be scheduled by calling:

Additionally, Pennsylvania Department of Health has a HealthyWoman Program offering free mammograms for uninsured and underinsured women below certain income levels. It can be reached at 1-800-215-7494.

Novak was to learn the results of the test at an appointment with her oncologist Jan. 24, 2017. Hours before Novak’s appointment, a nurse from her family doctor’s office called Novak at school to inform her of the test results.

“When you first hear you have cancer, it’s disbelief and shock,” she said.

Novak crossed the hallway and entered the classroom of music teacher and longtime friend Linda Tough, who lost her mother to breast cancer in 1988.

“I don’t know what to do with myself,” Novak told Tough. “I have cancer.”

‘Well, Gina,” Tough replied. “You are going to fight this.”

After Novak’s lumpectomy of the small mass in her left breast, she had one lymph node in her left armpit cut out and tested for cancer, a procedure commonly referred to as Sentinel node biopsy.

“If the Sentinel lymph node comes back negative (no signs of cancer), 95 percent of the time there’s no disease outside of the lymph node,” said Penn Medicine Lancaster General Health oncologist Dr. Beth Horenkamp. “It’s a big advance.”

Up until about 25 years ago, Horenkamp said breast cancer was largely a surgical disease.

“They tried to cure it by doing radical surgery,” Horenkamp said. “A mastectomy and they took out all of the lymph nodes they could possibly find. When you take out that many lymph nodes it’s hard for fluid to drain out of the arm, and people get bad lymphedema.”

Instead, the Sentinel lymph node procedure usually extracts one to four lymph nodes.

For Novak, the lone Sentinel lymph node extracted from her left armpit tested positive for cancer, leading to a diagnosis of Stage Two estrogen/progesterone positive, her-2 negative breast cancer.

Her treatment plan called for eight rounds of chemotherapy, with one round coming every other week, beginning April 17, 2017, and ending in October 2017, followed by 33-straight weekdays of radiation. She received all of her treatment at the Lancaster General Health Ann B. Barshinger Cancer Institute.

Novak continued to teach and coach along the way.

“I felt good enough to do it,” Novak said. “I did not want to stay home and just think about my cancer all day. I’m better off staying busy.”

'Something I couldn't fix'

A Montgomery County native, Novak was a standout field hockey and softball player in high school before going on to play both sports at Kutztown University in the 1980s - Novak was later inducted in the Kutztown Athletics Hall of Fame.

She followed her boyfriend, Gerad Novak, to Lancaster shortly after he landed a teaching gig in the Conestoga Valley School District. The two married June 18, 1988, and have since led successful teaching and coaching careers in the CV School District.

What are the symptoms?

Some people have no symptoms at all, according to the CDC. But symptoms can include:

Gina taught fourth grade at Smoketown Elementary School until her retirement at the end of the 2018-19 academic year. She coached field hockey (junior varsity) and softball (varsity head coach and varsity assistant) for about as long.

The Novaks have supported each other throughout their careers. During the fall season, Gina cooks a weekly meal for the CV football coaching staff for their Sunday meetings. When Gina was still teaching and coaching, Gerad tried cooking meals during the week if he beat Gina home from practice.

All of this is to say the Novaks’ passoing for sports came into play in 2017.

“I’ll throw it back to athletics,” Gerad Novak said. “You have a challenge or adversity. Most people try to step up in some way. I think that’s exactly what Gina did.”

“For me it was really scary because I had no control,” Gerad said. “There was nothing I could do. I could listen and be supportive and do what I could to help her. ...I tried to stay upbeat and positive. I tried to make life a little bit simpler for her.”

“I would say he was a calming force,” Gina said. "His emotion was always the same. He was the same throughout.”

Gina Novak drew also drew strength from her upbringing, having lived with her maternal grandparents while being raised by a single mother of three kids. Another is the toughness she gained when being unable to have children earlier in the Novaks’ marriage.

The American Cancer Society provides free wigs for adult women who financially qualify, but some women might prefer not to wear a wig.

Novak’s concoction of chemo drugs consisted of Doxorubicin, Cytoxan and Taxol, along with a neulasta injection. All were injected through a port in the left side of her chest.

Novak lost her hair. She had neuropathy, or tingling, in her toes and feet. Her saliva tasted metallic. The radiation to the spot on her left breast felt more like a bad sunburn.

“I still had a decent amount of energy,” she said. “I coached through my third round (of chemo). Then the softball and school year ended.”

To encourage Novak during the spring 2017 season, the CV softball players wore pink shirts, emblazoned with the words, “We Support Novak”  (pink is the color for Breast Cancer Awareness).

When Novak showed up to teach on May 8, 2017, the entire Smoketown Elementary School staff was wearing those same pink shirts. Tough was one of them.

“She (Novak) is not a wimp,” Tough said. “I watched her go through chemo. She just hung in there. She showed strength. ...she hardly missed school.”

'I won the first battle'

“The survival rate for breast cancer nowadays is very good,” Horenkamp said. “For Estrogen/progesterone positive, her-2 negative...she has a very good 10-year breast cancer survival outlook. Probably 80 to 90 percent chance it does not return within 10 years.”

“October 2017 is when treatment was over,” Novak said. “At that point they consider you cancer-free. It’s never cured. That’s the thing. It’s not curable but it’s treatable.”

Novak’s mother-in-law, Rose, beat breast cancer before the cancer returned in a different part of her body in the mid-2000s. Rose Novak died in 2008 at age 77. She spent the last year of her life living with Gina and Gerad Novak in their East Lampeter Township home. It’s part of the reason why Gina Novak is cautious when talking about being cancer-free.

“I’m not saying I beat cancer,” she said. “But I won the first battle.”

Asked what she hopes others learn from her story, Novak said, “That there is life after the cancer diagnosis for most people.’

“It’s not all doom and gloom,” she said. “It’s hard because I feel like everybody’s cancer is so different. There are people who get a diagnosis where there isn’t much hope. What do you say to that person?. ...I consider myself extremely lucky because I knew there was hope.”

Perhaps the better question, then, is how has the experience changed her?

“To appreciate life everyday,” she said. “Everyday I wake up in the morning and I think, ‘It’s a beautiful day. I’m here.’”

October is Breast Cancer Awareness Month, celebrated in countries across the globe to increase attention and awareness for early detection and treatment of the disease. Breast cancer is the most common cancer in women worldwide, according to the World Health Organization. It’s the second most common among American women after skin cancer, according to the Centers for Disease Prevention and Control.

April Good’s straight, blonde hair fell out less than two weeks after her first round of che…

General guidance for when women should begin getting mammograms is between ages 40 to 45.Cla…

Near the end of each April, Cedar Crest High School track and field coach Rob Bare has a mot…

The long, brunette hair Eva Salembier had been known for was long gone by the time she arriv…

'On the ice with us': Teammates, family use hockey to honor Manheim Township alum who died of overdose

In his prep days, Chad “Bomber” Neiss II was a multi-sport student-athlete. He was a good te…

Diane Berardi couldn’t believe her ears. Didn’t want to, actually. Somehow it had happened a…

Steve Kelly saw his world change in 2008, but rised to meet the challenge and learned some new things about himself along the way.

Devin Pulaski was 4 when she began chemotherapy.

Through Oct. 3, the Lancaster-Lebanon League field hockey season is a little more than a month old. With that in mind, here's a look at the to…

Eleven years have passed since Conestoga Valley alum Teresa Rook last played in a women’s college soccer game. In that time, no one has even g…