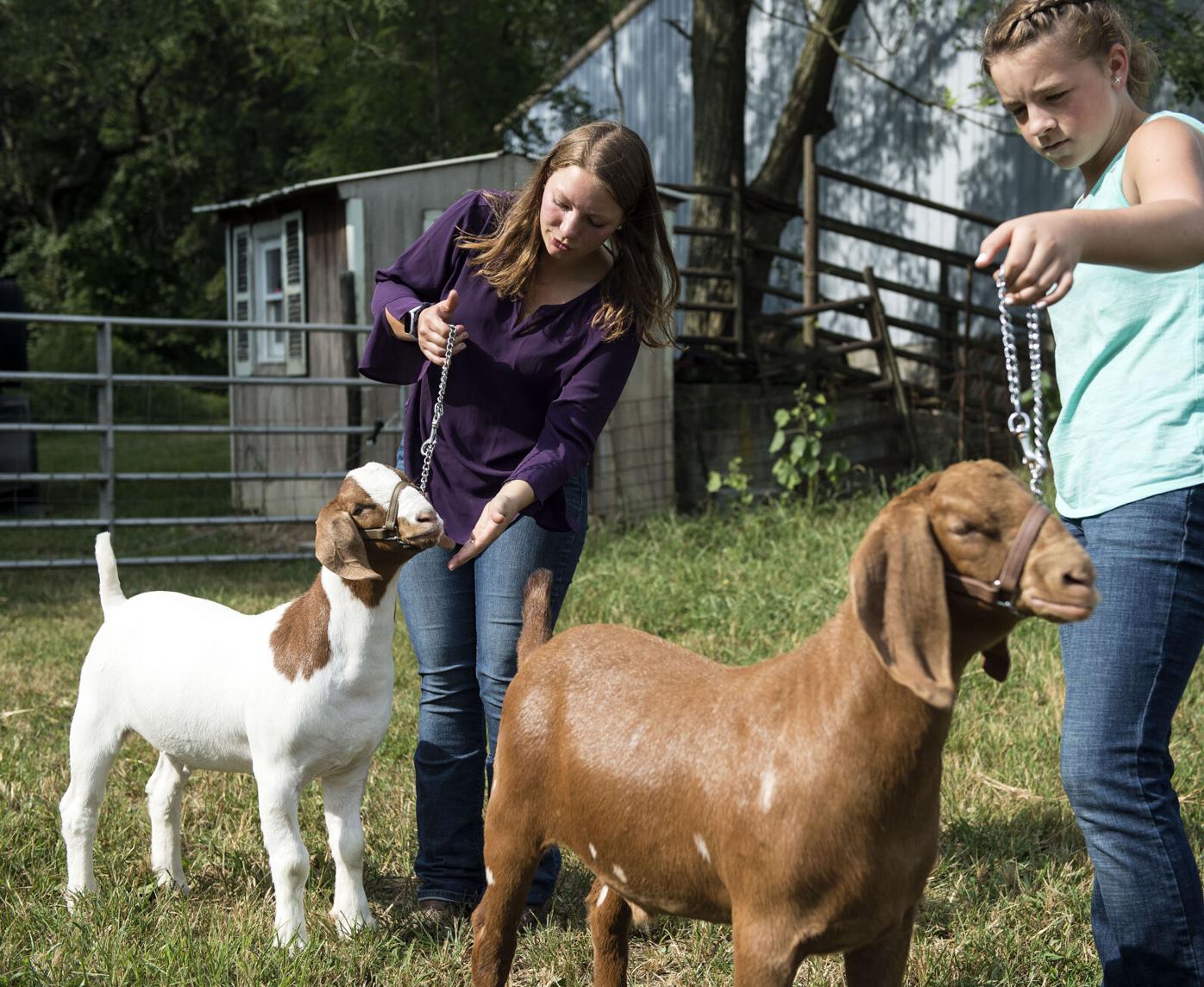 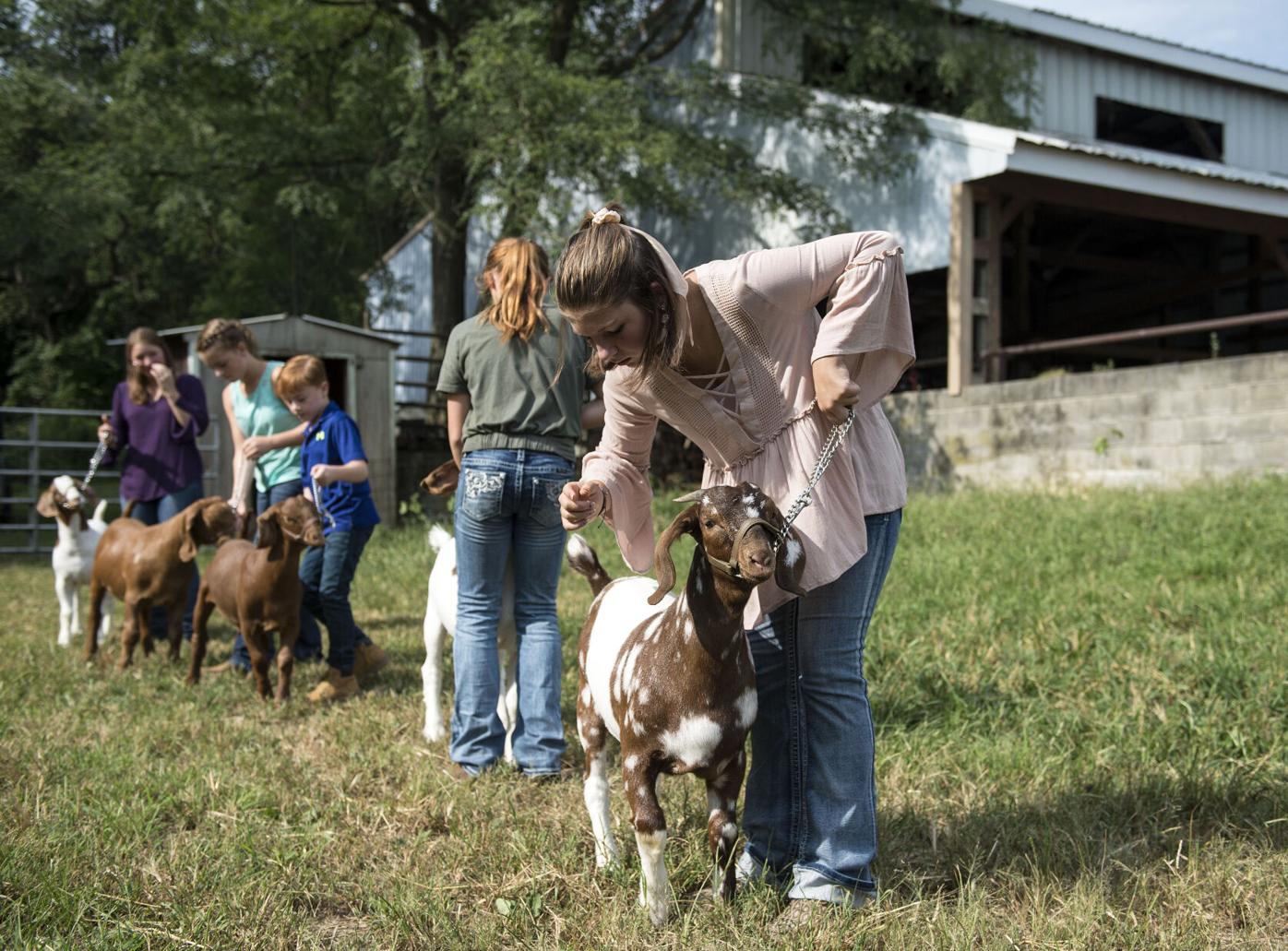 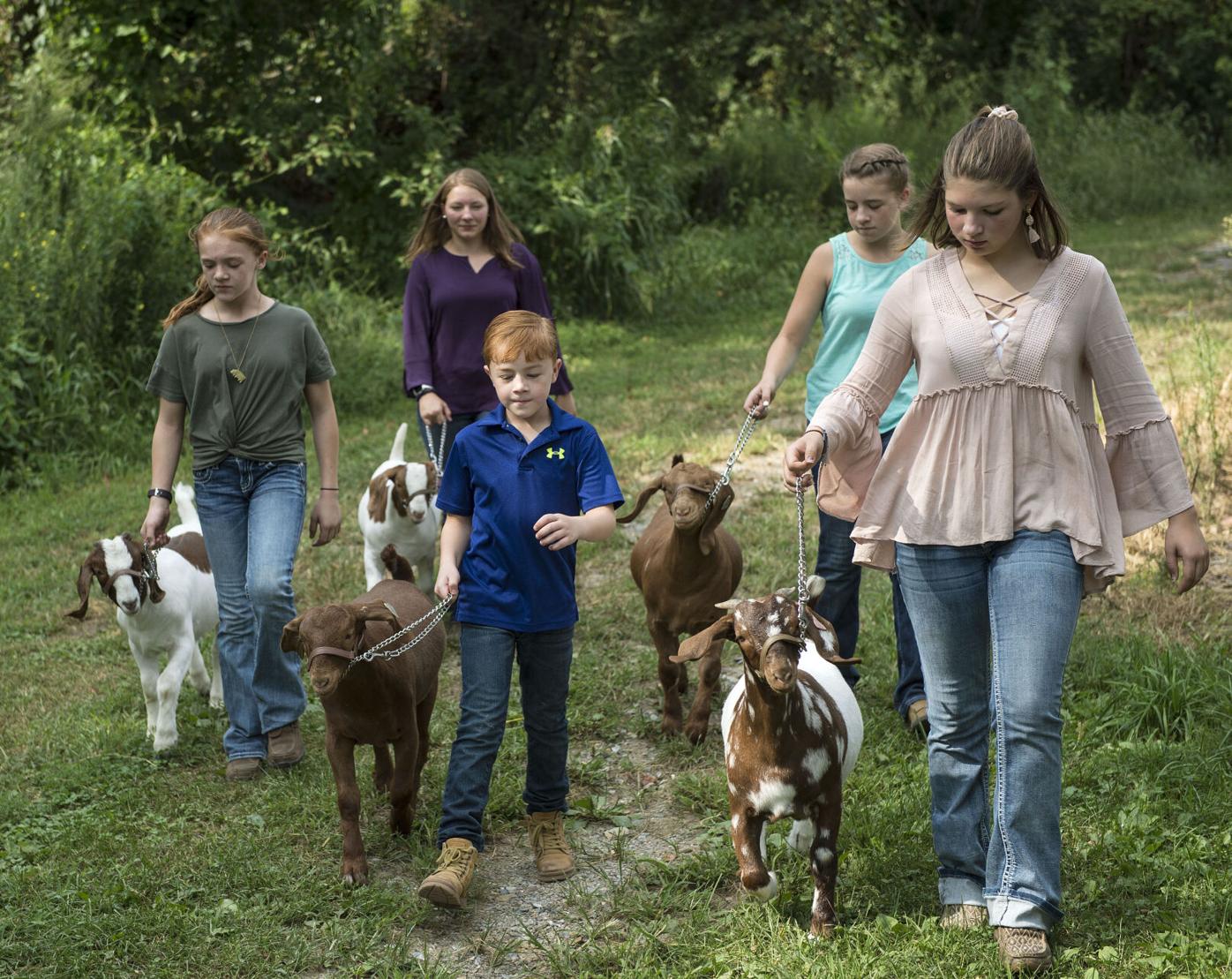 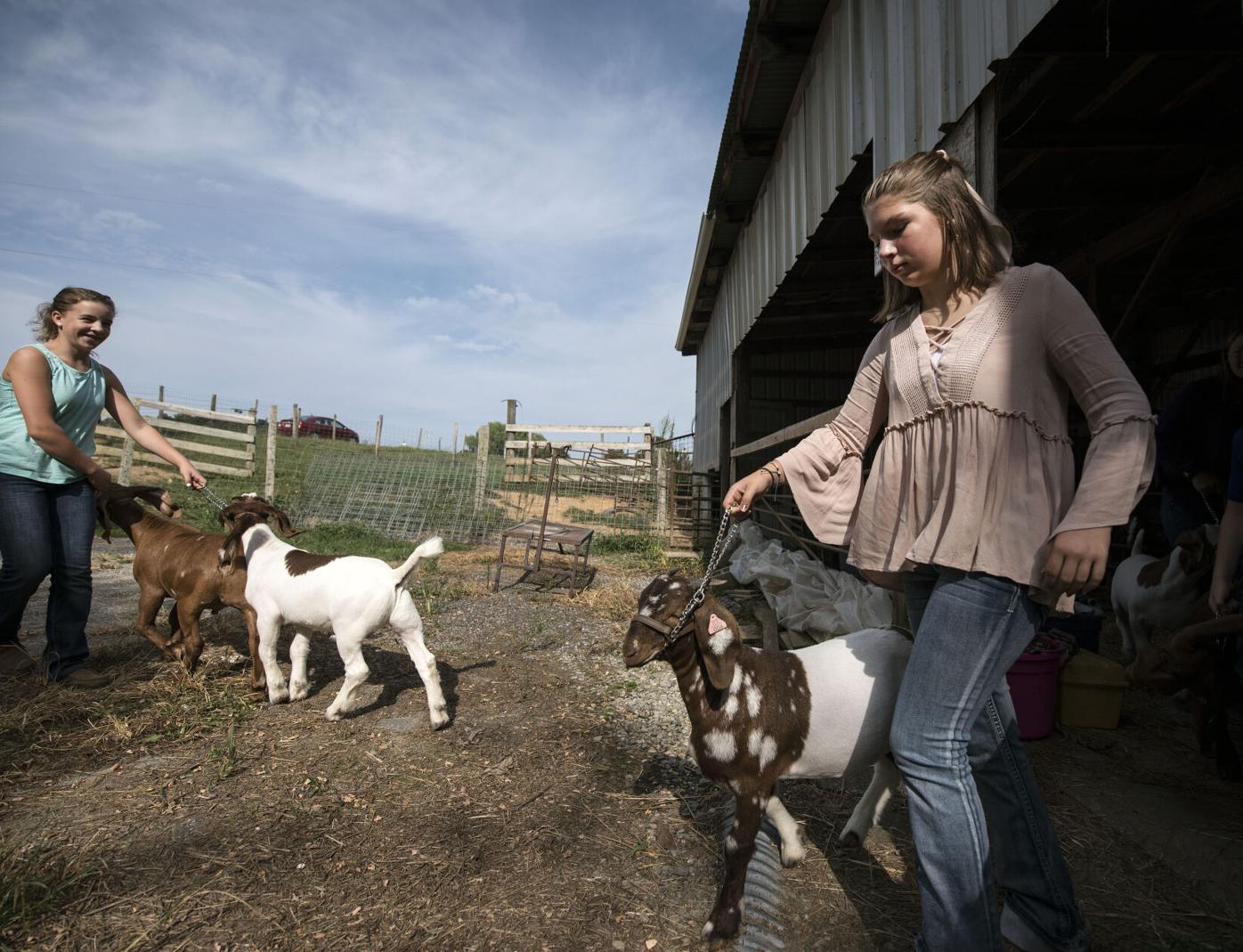 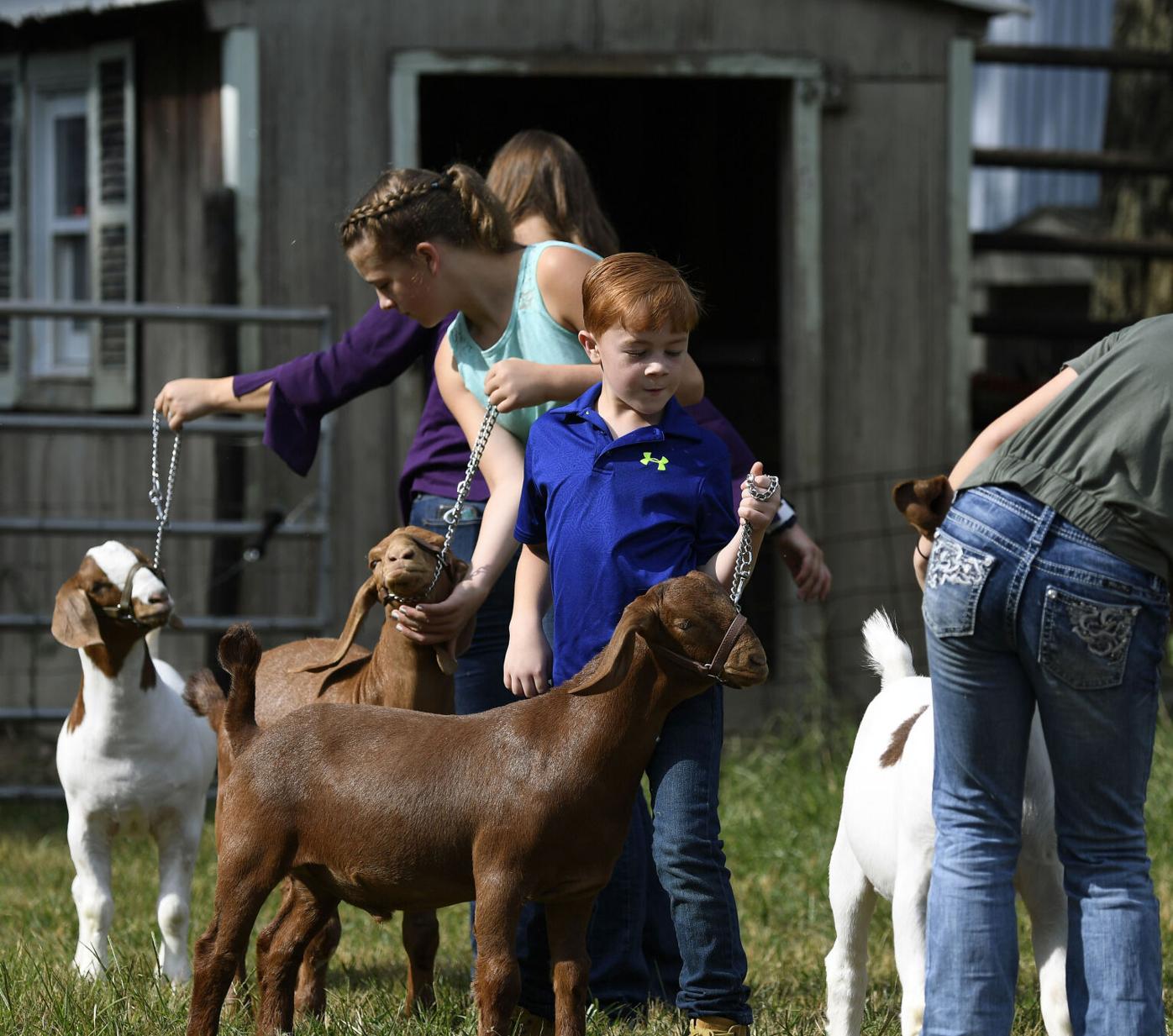 Levi Musser, 9, center, along with his sisters and cousins, show their Boer Goats at their farm in Mt. Joy Twp. Wednesday August 26, 2020. 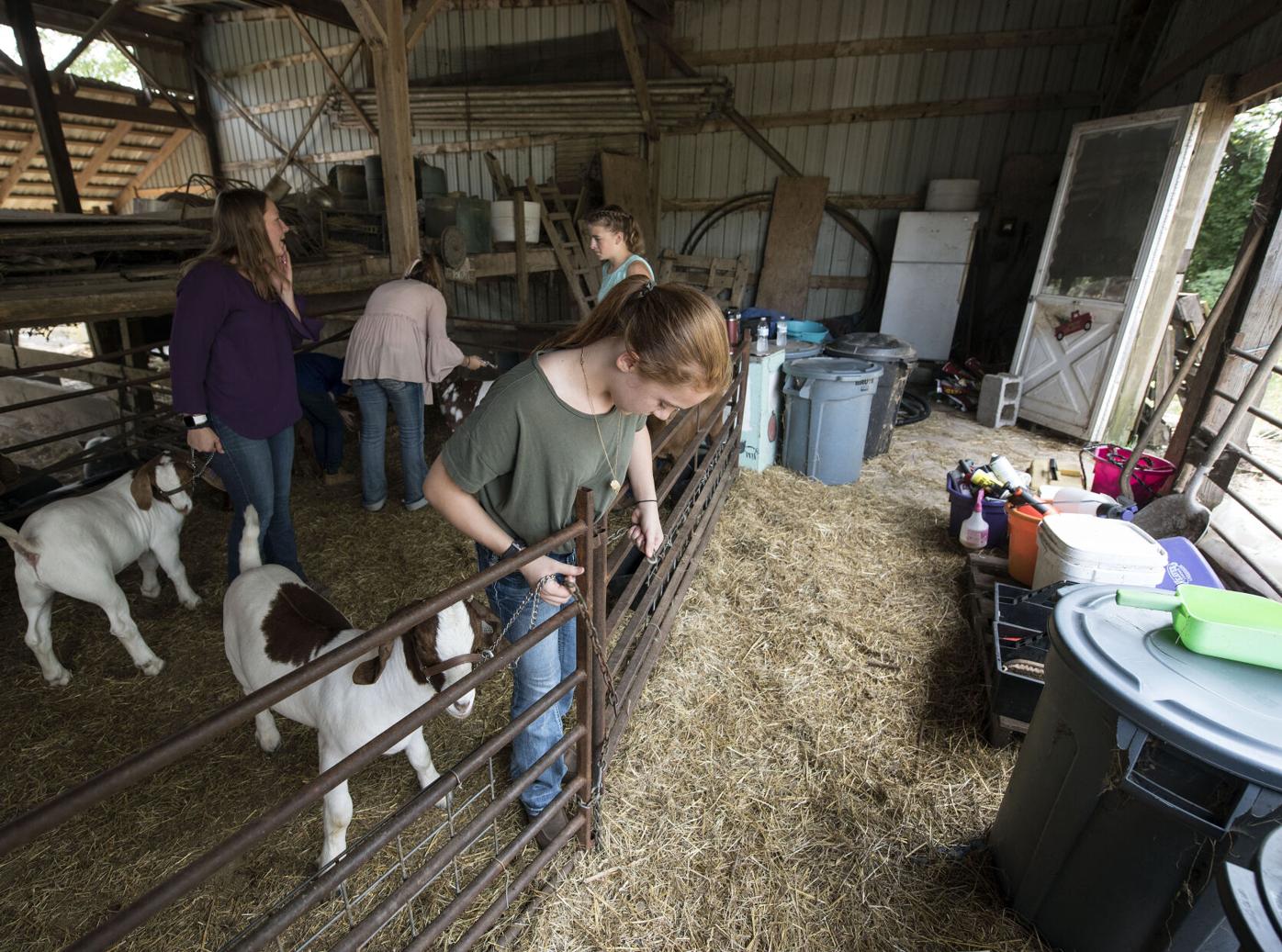 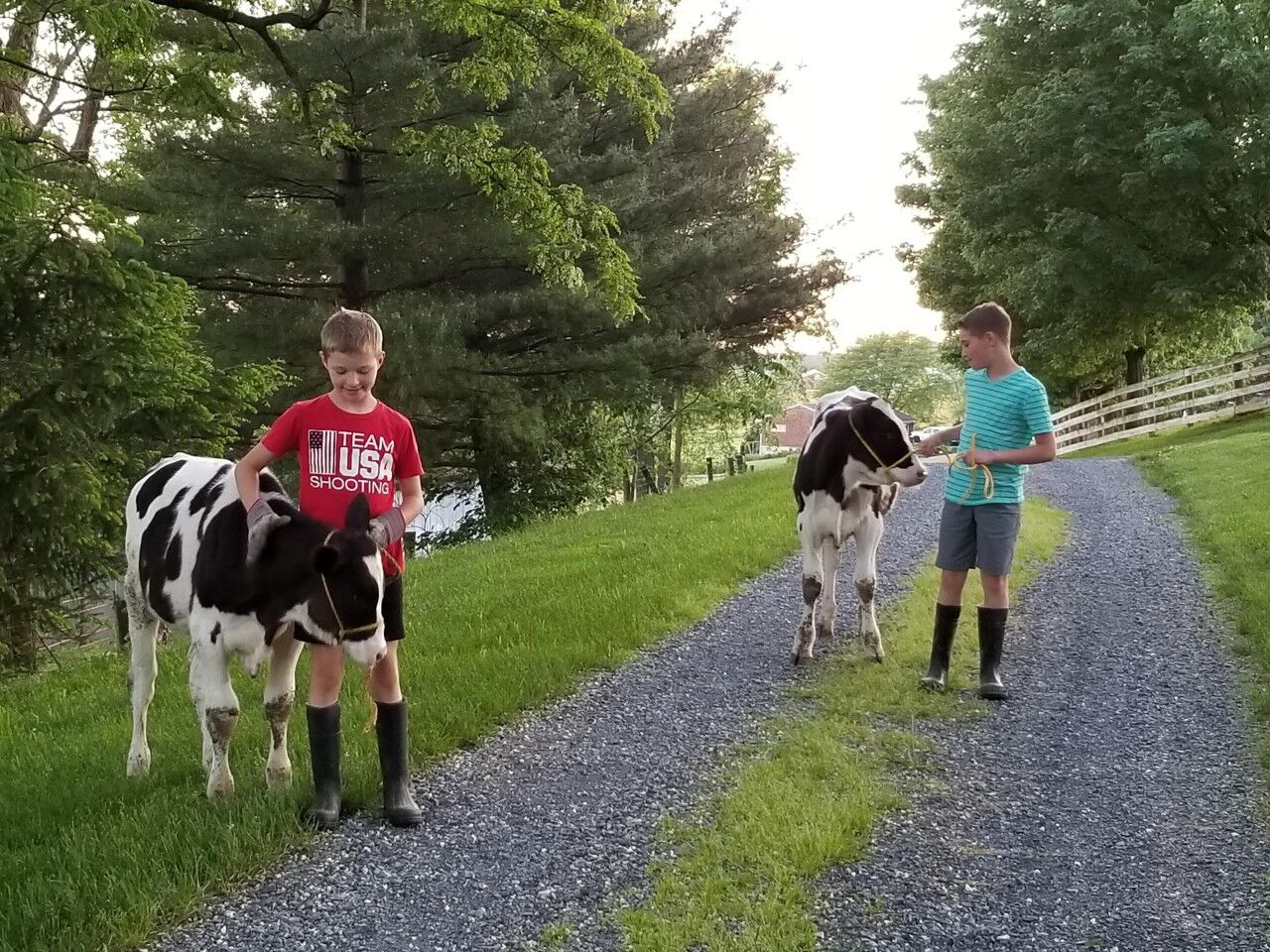 The Potts brothers, Micah, 9, and Nathan, 12, walk their dairy beef cattle on a gravel lane earlier this spring. (submitted photo) 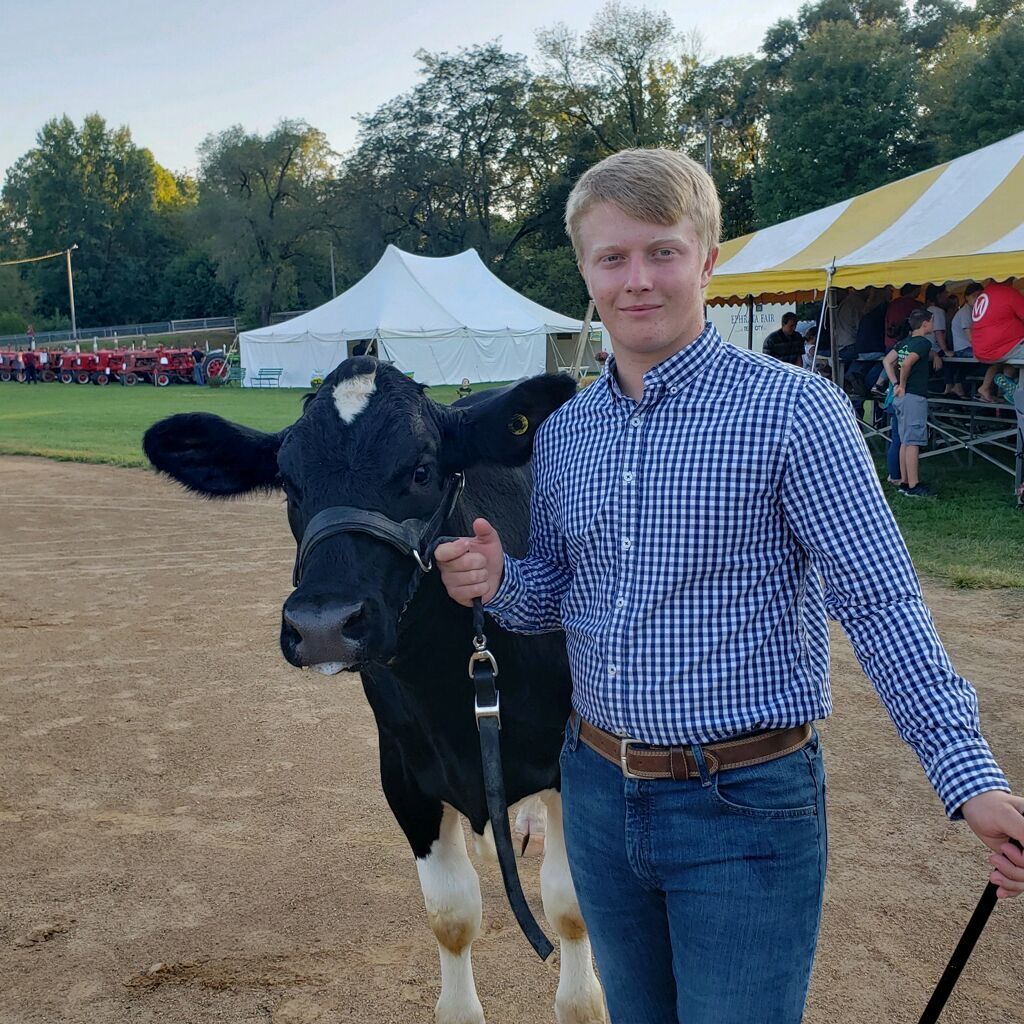 Trent Martin, now 17, shows one of his animals at the 2019 Ephrata Fair livestock auction. (submitted photo) 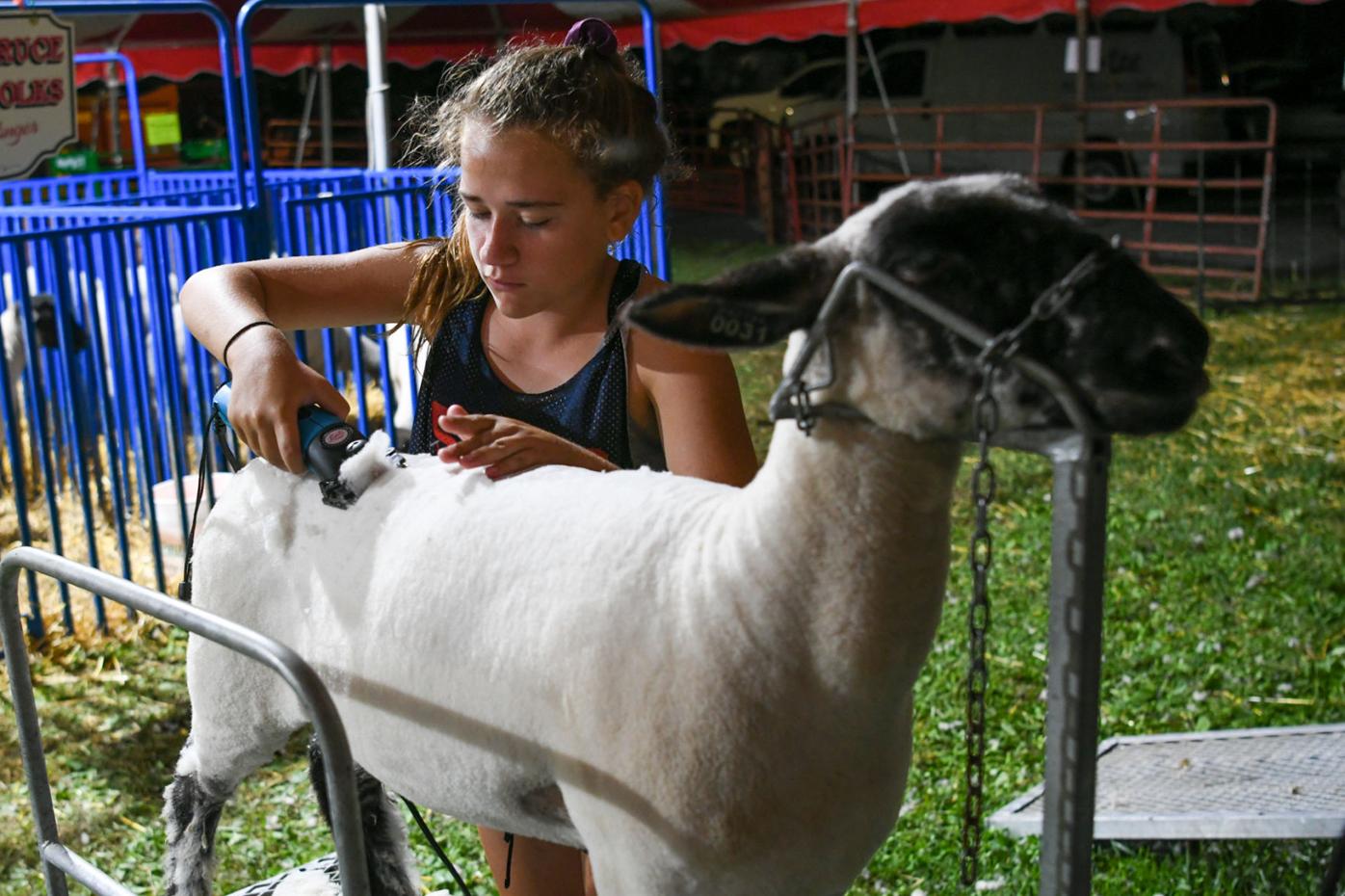 Fairs throughout Lancaster County may be canceled but some activities, like livestock shows and auctions, will still be held. Bailey Oberholtzer, now 15, of Ephrata, entered her lamb Athena in last year's Denver Fair.

Levi Musser, 9, center, along with his sisters and cousins, show their Boer Goats at their farm in Mt. Joy Twp. Wednesday August 26, 2020.

Still, the East Donegal Township teen had summer to look forward to, guessing the number of coronavirus cases would be down drastically in time for local farm shows and fairs, where she’d have a final chance to show off livestock in youth competitions.

That prediction was wrong. Musser learned in May that the Elizabethtown Fair was canceled for the first time in 46 years.

“I remember I was sitting in my dad’s truck, and I saw it on Facebook,” said Musser, who’s shown animals in youth competitions since she was 8 years old. “I just wanted to cry.”

And she wasn’t alone, with the ongoing pandemic leading to fair and farm show cancellations across the region.

Many children and teens show animals at more than one of those annual events, and their cancellations spelled a potential loss of both money and time.

‘Probably not going to make profit’

For Bailey Oberholtzer, 15, that time begins almost daily with a one-mile bike ride at 5:30 a.m. from her Ephrata Township home to nearby farmland, where she cares for several sheep.

There, the teen said she spends about two hours a day, cleaning and filling water buckets, feeding her animals and regularly grooming them. That’s in addition to running them to build up muscle and sitting with the animals to gain their trust — both advantages at competitions.

“They are like pampered puppies. They are royalty at our farm right now,” she said.

To Oberholtzer, that early morning pampering is nothing new. She’s been competing for years and has entered into multiple shows in Lancaster and Lebanon counties, as well as the Pennsylvania Farm Show, which will be held virtually instead of in-person in January due to the coronavirus. A state Department of Agriculture spokeswoman said last week officials were not yet ready to share details about how livestock shows will be impacted by the virtual shift.

Oberholtzer said she doesn’t mind putting in the time because hard work has the potential to lead to prizes and high prices at post-competition auctions — prizes and prices that could disappear alongside canceled events.

“For me it was really disappointing because I’m thinking in my head, ‘I have all these sheep that are really good,’” Oberholtzer said, adding she’s looking to alternative shows, even some out of state. “This year, I’m probably not going to make profit.”

That possible loss of profit is what’s troubling to Jevin Kready, a farmer at Meadow Springs Farm in Rapho Township.

Often, he said, youth competitors rely on those profits to fund their next year, to pay for the cost of animals, feed and other necessary items.

“If you don’t get any return on that, you are not going to be able to afford your next animal,” he said. “It’s not just affecting this year. It’s affecting the long term.”

Musser offered a first-hand perspective, sharing some of the costs she’s faced while showing steers, sheep, goats and pigs — animals that she said can range in price from a couple hundred dollars to upward of $1,000.

Knowing about the ongoing pandemic, Musser said she had to weigh potential losses when selecting animals this year, making the decision to scale back.

“It was just a lot of disappointment and uncertainty. In the beginning, I was like, ‘Is it even worth it to work on my animals,’” said Musser, who plans to study agricultural science at Penn State University after taking a gap year serving as state chaplain for the Pennsylvania Future Farmers of America.

Then came word of the cancellations, and Kready, well aware of the mounting disappointments, said he and a group of like-minded locals knew they had to do something.

So they organized, reaching out to competitors, judges and prospective buyers before setting up an August event on Kready’s farm, where youth from the Elizabethtown area could compete, albeit without a public audience, he said.

All told, about 100 exhibitors — Musser among them — had a chance to show steers, dairy beef, sheep, goats and pigs, Kready said.

“I was very happy with that turnout,” Kready said, hoping that the event showcased to the young competitors the importance of resilience in agriculture. “When you have a strong passion about something, you work for it.”

‘An investment in the future’

It’s recognizing that passion in the youth exhibitors that’s driving the effort to create a similar buyer/competitor-only auction to replace the Ephrata Fair, said Lynette Sauder, a member of the fair board. The event, possibly to be held at the Green Dragon, would not be fair-affiliated, she said.

The goal is to provide some reward for the children’s hard work, while offering incentive for their continued interest in agriculture, she said.

“It’s definitely an investment in the future,” Sauder said, hopeful that things will be back to normal in summer 2021.

By then, Trent Martin, 17, of Ephrata Township, will be long gone, working as part of a summer harvest crew in the western United States, he said.

That means the high school senior, who’s shown livestock since he was 8 years old, also missed out on his final opportunity to show steers in youth competitions due to the coronavirus.

“It was disappointing because it was my last year,” he said, remembering all of the hard work he’s put into his animals over the years. “People outside of the farm, they don’t understand what has to be done for the food to be on your plate.”

‘Ag will find a way’

Not all competitors have Martin’s years of experience. In fact, some are just starting out. That includes Clay Township’s Potts brothers — Nathan, 12, and Micah, 9 — who both planned to show dairy beef cattle for the first time this year at the Ephrata Fair.

“When I found out that the show was canceled, I was really disappointed,” Nathan Potts said. “I was just looking forward to everyone seeing all the hard work that I did.”

The brothers also maintained a daily morning care routine, and for Micah Potts the best part of that work was clear.

“Probably just getting to bond with them and to spend time with them,” he said, explaining that’s why news of the cancellation was so disappointing. “I was like, ‘'Oh man. I put in all that work.’”

But already, the brothers are looking past that disappointment to the possibility of competing next year, according to their mother Amy Potts.

“They are already talking about if they want to do dairy beef next year or try a meat goat,” she said. “I’ve told them that we will chalk this year up to experience and learning and that we may lose money this year and will hope for something better next year.”

And that mindset is rampant throughout the agricultural community despite age, said Sarah Stauffer, an FFA adviser and agriculture teacher at Ephrata High School.

“We are being more innovative; we are being progressive,” she said. “The mantra and the mindset is ag will find a way.”

Blue-ribbon recipe; Lancaster County fairs and the Pa. Farm Show are canceled but you can still make these cookies

What is the oldest fair in Lancaster County? Plus other fun fair facts

These 10 Pennsylvania counties had the highest rates of new coronavirus cases for Sept. 1-7

The rate of new coronavirus cases increased in the past week in Pennsylvania, fueled in part by outbreaks on college campuses as the new schoo…

A little over a year from now, the empty Toys R Us store on Harrisburg Pike at Route 30 will be full of people again -- as an outpatient cente…

New claims for jobless benefits in Lancaster County soar 45%, but still a fraction of peak in spring

The number of new claims for unemployment benefits filed by Lancaster County residents rose 45.1% last week, but the percentage is so shocking…

Denette and William Groff are wholesalers of vintage “farm finds” and furniture. They know that well-used items — what may look to many like rubbish — can be a treasure, a collectible, or be repurposed and have a second or third life.

By January, things were looking up at Meadow Vista Dairy near Bainbridge, according to farmer Justin Risser.

Addressing a group of his farming peers, Lonnie Kauffman spoke Wednesday, looking back on the early days of the COVID-19 pandemic and remember…

When it comes to the ongoing pandemic, Darwin Nissley said he’s kept his attention focused firmly on the news, watching as daily updates show …

Members of the local farming community had some good news Friday for grocery buyers: There’s no need to panic.

Youth competitors, vendors could lose out due to virtual Pennsylvania Farm Show

With a proud, wide smile, Bailey Oberholtzer posed for a photo earlier this year, cradling the head of a sheep in her hands as she leaned in f…