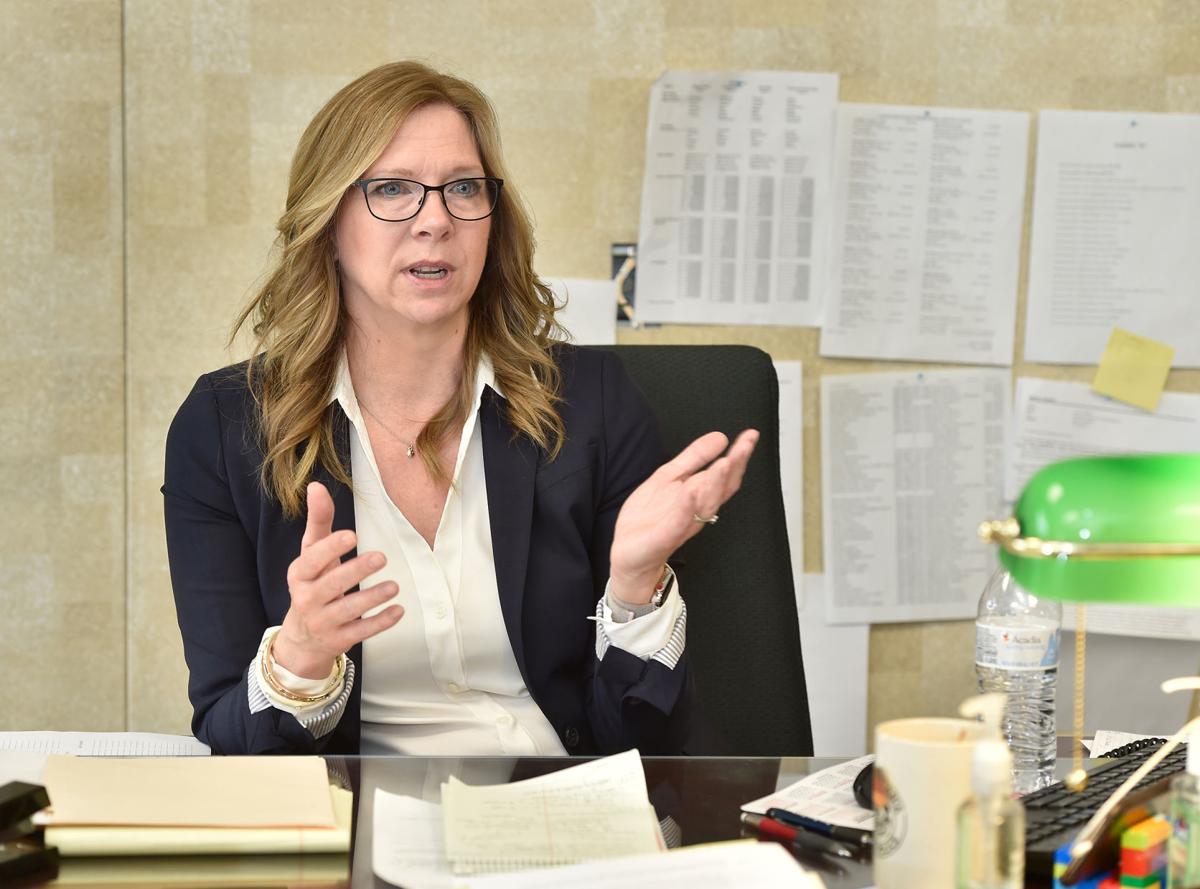 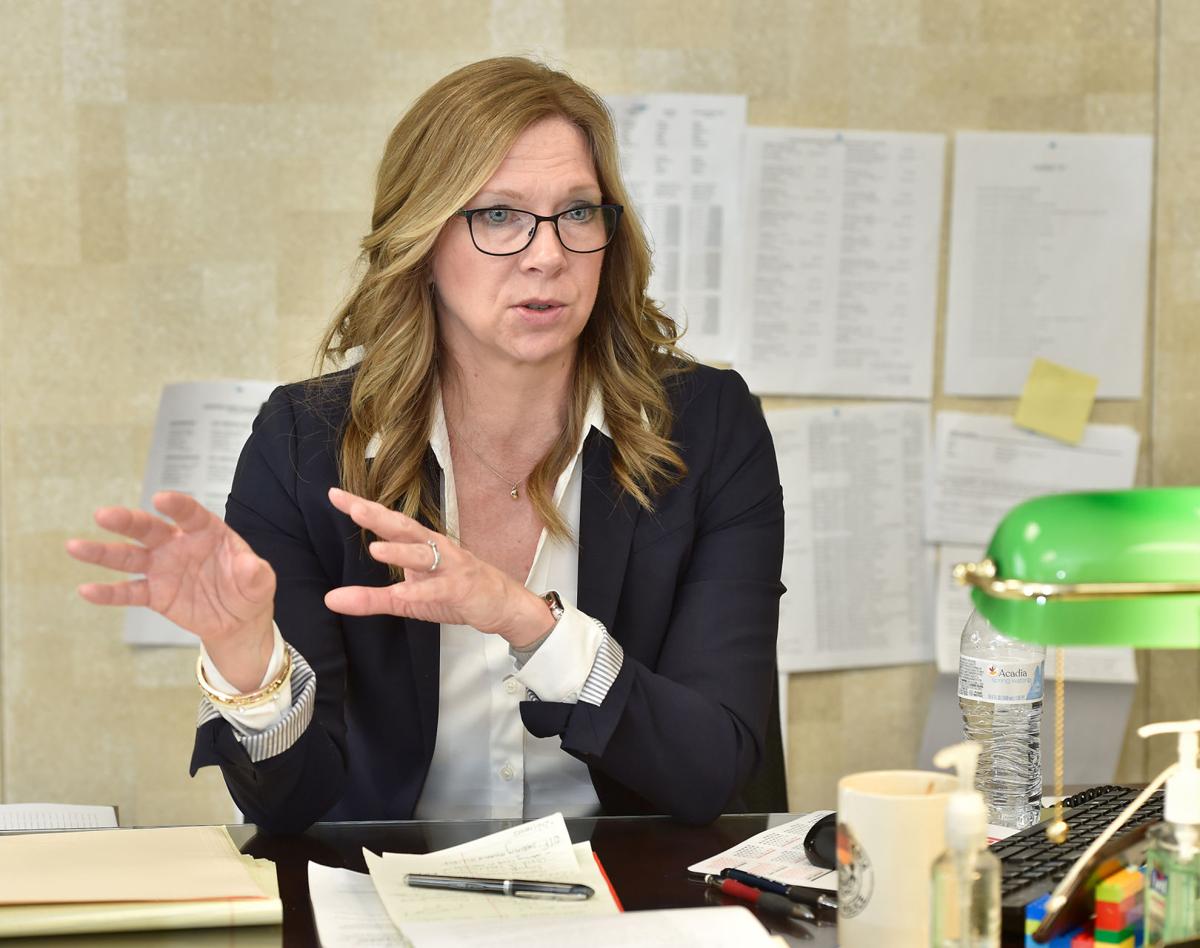 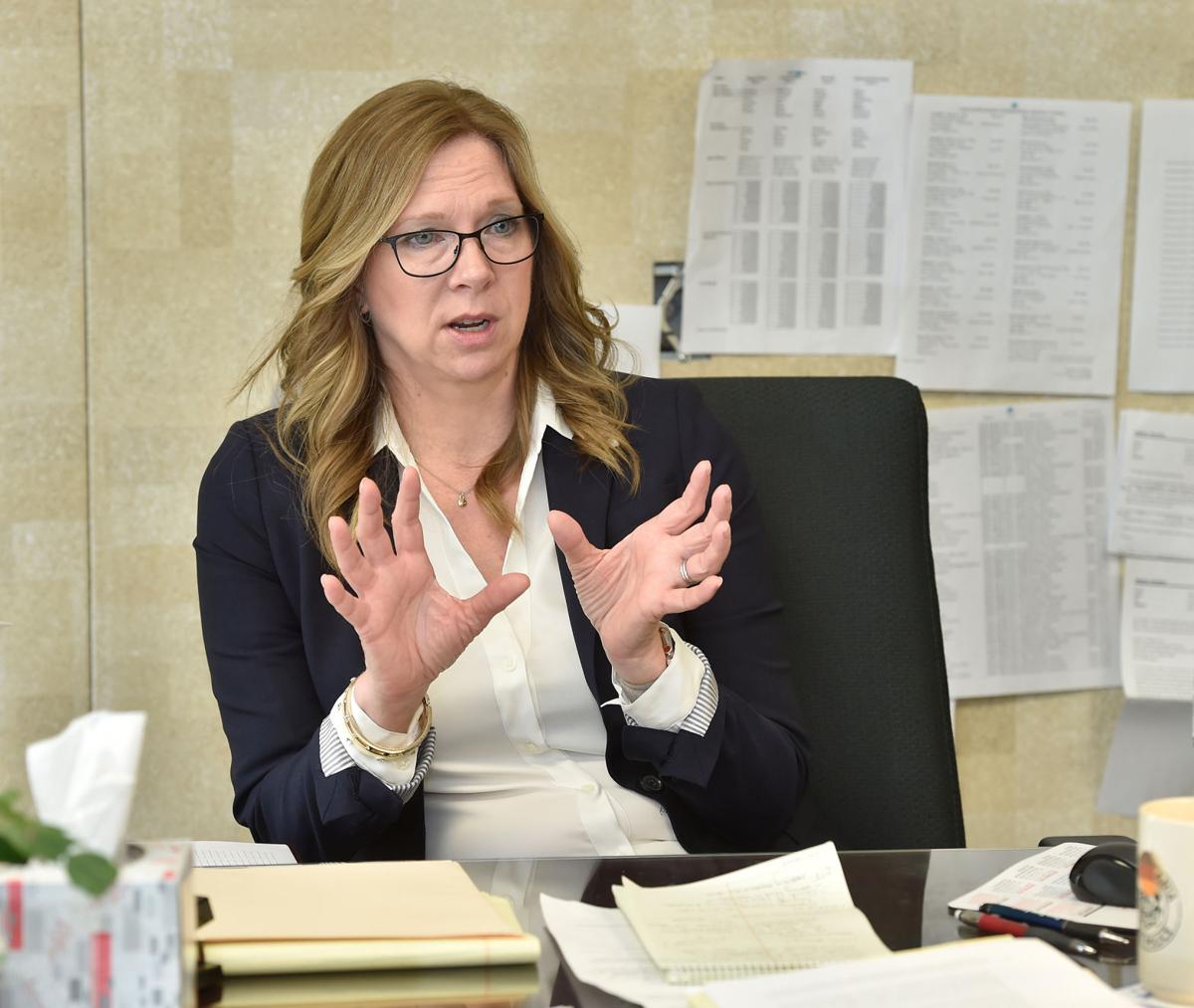 Heather Adams, 48, was sworn in January 6 as Lancaster County’s first female district attorney and marked 100 days in office on April 15.

LNP recently talked with Adams about what the job, and leading a staff of more than 80 employees, has been like.

What did you find different about the job than you expected?

Probably just the demands of the job on a daily basis. There was no forgiving moment for the administration. As soon as we came in, we were hit with a lot of stuff: Scheid happened. We were dealing with Luna. There were some pretty heavy things that came across our desk.

(Adams announced in January that her office, along with Manor Township police, was taking investigative action related to the Andrew T. Scheid Funeral Home near Millersville. Scheid, who has not been charged with any crimes, had his funeral board license suspended indefinitely in February. Her reference to Luna was about a request for the autopsy record of Jonathan Luna, a Baltimore federal prosecutor whose body was found in 2003 in Brecknock Township. In February, a judge agreed with Adams’ request to seal the records. LNP|LancasterOnline is litigating the decision to close the records to the public.)

A typical day (pre-COVID-19) would start at the office generally around 8 a.m. and would begin with me trying to catch up on any emails from the previous day or days. Once the day begins, a number of different assistant district attorneys typically stop in to discuss cases or issues that they are dealing throughout the day. There are many case meetings, meetings with other groups and a regularly scheduled weekly management meeting with my first assistant. Yes: Many meetings.

Do assistant district attorneys ask: Former D.A. Craig Stedman did it this way. How do you want it done?

Mostly they are making me aware of issues I need to be aware of. A couple of times it was: This how we handled it before, but we wanted to check with you how do you want to move going forward? I’ve been really appreciative of that. I feel very supported by everyone.

I think to his credit, he set me up for success with a lot of the programs that are currently going on. Treatments courts. Accelerated rehabilitative disposition (which allows certain first-time offenders to complete a probationary program with the opportunity to clear their record.) The diversionary programs.

Will you prosecute cases?

That’s probably a solid no. I talked with Judge Donald Totaro and he advised against it. He did one case when he was the district attorney and said it was extremely difficult.

What, if any, changes are you making?

We’re trying to identify some efficiencies. I sent out a survey to the staff before I was sworn in. I got a lot of honest answers and feedback. That was incredibly helpful to identify priorities. One issue raised was inequitable work distribution. That affects morale.

Travis Anderson was named first deputy district attorney, which is a new position. He will coordinate trial teams, handle plea-approvals and case assignments, to make sure the workload is evenly distributed.

We’re also expanding eligibility for drug court. People with felony drug charges were pretty much excluded in Lancaster County. When I was in York County, that wasn’t the case.

The goal is to really find those applicants who really have tried everything else and haven’t had that the opportunity of such a structured program and are really ready for a change. That might have involved people who were middle-manning, for lack of a better term, or simply selling to support a habit. Dealers who are profiting from the drug trade won’t be eligible.

How about the charge of drug delivery resulting in death? The charge has its critics. Do you plan to change the office’s use of it?

No. I think a strong law enforcement response is necessary. Heroin nowadays is more potent and often mixed with fentanyl.

I think the people who are selling that that should know, if somebody dies as a result of that, we’re going to come after them. I completely recognize that someone who is sharing drugs with a friend or a relative is in a different position than someone who is profiting from dealing. But we can use these investigations to go up the chain and find out who is truly responsible for distributing more of the product into the community.

And, I have said this before, prosecuting these cases give the victims some dignity, rather than treating this as some sad inevitability, so just wash your hands of it.

You had wanted to create a training program for new assistant district attorneys. Have you?

I am happy to report the training program is up and running. We hired two assistant district attorneys in early March and another March 16 and then we hit COVID-19. But, they were able to benefit from seeing the court system operate normally for a bit. We’ve been able to use videoconferencing for training sessions. Basically, the program covers all aspects of an assistant district attorneys and also instruction on other departments we work with.

How else has COVID-19 affected the office?

Not that significantly. Initially, we had a soft deadline of reorganizing the office in three months, but we realized we couldn’t do it that fast. So COVID-19 has given us some breathing room.

Staff is still working, but most are working remotely. When the courts resume, we will have a tremendous backlog and we are all working how best to address that.

Where do things stand with county drug task force funding?

Funding for 2020 is OK. During COVID-19, we still got several checks from municipalities. The county commissioners, the Lancaster County Association of Township Supervisors and my office were supposed to meet to discuss the drug task force, but that’s been on hold because of COVID-19.

What do you want people to know about your time on the job?

Despite the challenges, I thoroughly enjoy the job. And I give a lot of the credit on the way this job runs to the staff. I’m happy to put my stamp on this office, but the staff is amazing. They are the ones on the front lines handing these cases on a day to day basis.

I came into this job with experience in criminal defense as well as many, many years in prosecution. So it’s very important to me to see that justice is done taking into consideration victims of crimes and the police officers who work so diligently, but also to ensure that the constitutional rights of everyone are protected. I take that very seriously.

On March 16, Ephrata Borough posted an update in response to the unfolding COVID-19 outbreak:

The number of rape kits untested for more than one year — considered backlogged under state law — has fallen to 94 statewide, according to the…

State funeral board slaps $150,000 fine against Andrew Scheid, suspends him for at least 3 years

Suspended Lancaster County-based funeral director Andrew T. Scheid is barred from mortuary practice for at least three years and must pay a $1…

Manheim Auto Auction will furlough nearly 700 employees at its auction on Lancaster Road in Manheim, among more than 1,100 job cuts at three a…

Mental illness is another pandemic we should heed [opinion]

A judicial order closing Lancaster County courts to the public was extended to June 30 this morning by President Judge David Ashworth, but the…

The sister of a man whose body was mistakenly sent to Andrew T. Scheid Funeral Home is suing its suspended funeral director along with the Man…

A Lancaster man U.S. Marshals arrested at his home Tuesday faces felony charges in connection with a woman's fatal overdose in May, according …

Attorneys for Andrew T. Scheid Funeral Home and a former employee have reached a settlement in a federal lawsuit accusing Scheid’s wife of sex…

In April 2003, this newspaper’s predecessor asked readers to name one good thing about America.

Hearings on criminal charges for Andrew T. Scheid postponed to next week