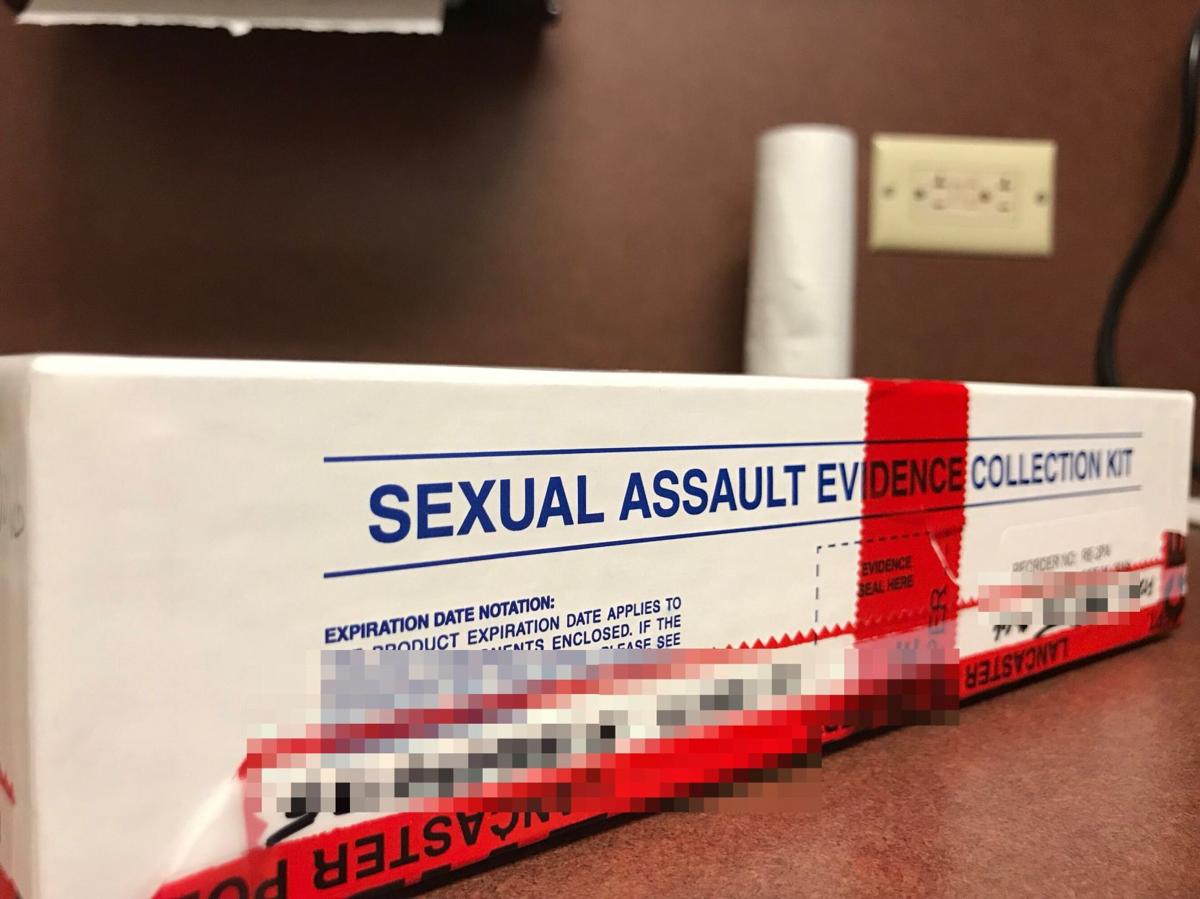 This is an image of a rape kit, or sexual assault evidence kit, stored by the Lancaster city police.

This May 2017 file photo shows a Pennsylvania State Police cruiser sitting in traffic in Lancaster city. 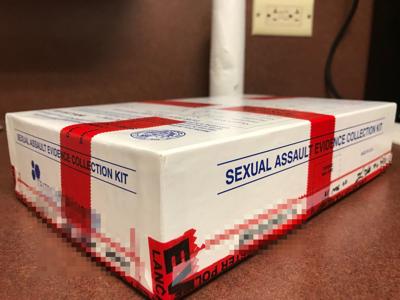 Without the evidence gathered in a rape kit, Gabriel Valentin-Rodriguez, Antwuan Gomez and Robert Pitt wouldn’t have been charged with sexual assault crimes committed in Lancaster County.

Convictions in all three cases give an example of how a rape kit test can make all the difference for prosecution.

Pennsylvania has been taking a closer look at how it handles and reports rape kits since Act 27 — an expansion on the Sexual Assault Testing and Evidence Collection Act — went into effect in 2015.

Act 27 set requirements for reporting how many kits are backlogged, meaning untested for more than 12 months.

A review the next year by state Auditor General Eugene DePasquale criticized state law enforcement and health officials for both the backlog and for a poor reporting system.

After years of renewed effort, the number of reported backlogged kits statewide has decreased by over 60 percent, from 1,908 kits in 2016 to 689 in 2018. Along with that, the number of reporting agencies has increased from about one-third to 90 percent of the nearly 1,100 departments in Pennsylvania.

Kendra Saunders wanted to know what the number looked like in Lancaster County, where she has been a counseling psychologist at Millersville University for 15 years.

She submitted a question through We the People, LancasterOnline’s reader-powered journalism project:

“How many untested rape kits are there in Lancaster County? Who or what determines if a rape kit will be tested?” she asked.

Saunders said she has worked with many sexual assault victims.

“One really simple thing we can do to show that we value victims is to test their rape kits,” she told LNP.

The Pennsylvania Coalition Against Rape recognizes the YWCA Lancaster as the rape crisis center for Lancaster County.

Victims at hospitals in Lancaster County are given the option to have an advocate from the YWCA walk them through the process, according to Mandy Billman, director of the sexual assault counseling center.

“We help explain the exam, we help give people an idea of what may come next,” she said. “We're never going to tell someone what to do. Sexual assault and rape is about power and control. We're all about giving choices back to them.”

Lancaster County rape cases where charges have been filed in part due to rape kit evidence:

— Gabriel Valentin-Rodriguez (left) was charged in 2008 with raping a woman at knifepoint in the King Street Parking Garage, now the Penn Square Garage, in Lancaster. The assault happened nearly 10 years earlier in December 1999. DNA from the crime matched with Valentin-Rodriguez, who had been convicted of a similar violent sex crime in Florida. He pleaded guilty in 2010 and was sentenced 19½ to 40 years in jail. He is serving a life sentence at Holmes Correctional Institution in Florida for a sex crime he committed there in 2006.

— Antwaun Gomez (center) was charged after he raped and beat a woman in a Lancaster alley in January 2010. In 2011 he pleaded guilty and was sentenced to 16 to 40 years in state prison. He is incarcerated at SCI Chester in Chester.

— Robert Pitt (right) was charged in 2016 regarding a 2014 attack of a woman in the 400 block of South Duke Street in Lancaster. He forced the woman behind a store where he raped and beat her. Pitt pleaded guilty in 2017 and was sentenced up to 30 years in prison. He is incarcerated at SCI Laurel Highlands in Somerset.

How the reporting works

A review of Department of Health data and interviews with several police chiefs showed that there were no backlogged rape kits in Lancaster County in 2017.

“If there are zero untested rape kits in Lancaster County, that is certainly a very good thing,” DePasquale recently told LNP.

One of the things Act 27 did was require municipal departments to report annually how many of their kits are backlogged. In the first report in 2016, Lancaster County departments had 28 backlogged kits. Officials at many of the departments said they did not understand how to report the information correctly.

New Holland Police Department was the only county force not included in the 2018 report, but it doesn’t have a backlog, Chief William Leighty said.

He said the department had one backlogged kit in 2017, but it should have been in the “victim did not consent” category for explaining why it wasn’t tested. He said he’ll correct it in the next report.

Manor Township also had one kit in the backlog category in 2017, but Chief Todd Graeff said that, too, should be listed as a kit for which the victim did not give consent for testing.

According to the Lancaster County district attorney’s office, however, a backlog hasn’t been a problem with county departments.

“I can only speak for Lancaster County in saying we have never had a true backlog in the sense of kits that should be tested (are) essentially neglected in evidence lockers,” district attorney spokesman Brett Hambright said.

Kits that had been classified as backlogged fell under two categories that the Department of Health added for its April 2018 report: a victim who did not consent to testing or an anonymous victim, Hambright said.

The categories were added to help law enforcement agencies know how to categorize the kits, according to the Department of Health.

Overall, the report shows progress on reporting statewide, with 90 percent of municipal departments reporting and a 1,200-kit decrease in the backlog overall.

Hospital staff are on the front lines of the testing process.

After evidence is gathered in a rape kit, victims must give consent for a kit to be tested by police, according to state law. And some victims decide against taking that step.

“That number will probably never be zero,” DePasquale said.

Testing rape kits “does help prevent future rapes and crack down on future crimes,” he said. “But you have to respect the wishes of the victim and walk through it with the victim.”

To stay up to date with LancasterOnline's We the People, join the Facebook group by clicking here.

Police from the jurisdiction in which the crime happened have 72 hours to pick the kit up from the hospital. And those departments have 15 days to send it to one of three state labs: the Philadelphia Office of Forensic Sciences, the Allegheny County Office of the Medical Examiner and state police’s forensic services.

Cases are prioritized based on factors such as severity of offense, pending court dates and order in which they are received, according to state police.

If a victim does not give immediate approval for testing, their kit must be stored for at least two years, according to state law.

After a kit is tested, it’s returned to the submitting agency and saved until all court proceedings are finished or the statute of limitations has expired,  Tarkowski said.

In the past, Lancaster police wouldn’t send kits for testing if the victim originally consented but then stopped talking with investigators. Now, as long as the victim gives initial consent, the department sends the kits unless a victim says not to proceed, he said.

Still, some victims don’t want the police to get involved, Berkheiser said.

“Some may feel that they are not ready to talk about it to law enforcement and can be assured that the evidence will be properly collected and held until they are ready to proceed,” he said.

More work to be done

One of state police’s challenges is having enough personnel and facilities to do the testing, according to Tarkowski. A new DNA testing facility is being designed in Westmoreland County for a tentative 2020 opening.

The Pennsylvania Coalition Against Rape continues to advocate for more laws to guide the handling of kits even after they’re tested.

For example, there are no guidelines to alert victims if their kit is about to be destroyed, according to coalition spokeswoman Kristen Houser.

“We would certainly like to see Pennsylvania close the gap and have guidelines all around on kit collection, kit processing, kit storage and kit destruction,” Houser told LNP.

The coalition is named in Act 27 as responsible for working with state police to make standards for kits and approve of testing laboratories.

At least two bills in the state Senate would add to Act 27 and help victims (see information box).

“We really try to advocate for giving as many options as possible and make sure (victims) have support through the rape crisis centers across Pennsylvania,” Houser said.

Being a victim of sexual assault is a devastating event in and of itself, Saunders said, let alone the process of getting a rape kit done and working with a police investigation.

“I think we have a duty to handle the information that we collect very carefully,” she said.

— The passage of House Bill 2419 would allow a kit to be tested without a victim having to give consent. It was introduced by Democrat Rep. Mike Schlossberg of Lehigh Valley in 2018 and referred to a house judiciary committee in May.

— Senate Bill 742 or the Sexual Assault Survivors Bill of Rights, introduced to the senate in 2017 by Republican Sen. Stewart Greenleaf of Bucks and Montgomery counties. The bill in part proposes the idea of giving victims notification on the status of their kits, she said, almost like tracking a package that is being mailed to your home. The bill was referred to a house judiciary committee in April.

— Senate Bill 1209 would, in part, set up a hotline for hospitals to call if a rape kit was not picked up by police within 72 hours, introduced in June by Republican Sen. Wayne Langerholc Jr. of Bedford, Cambria and Clearfield counties. The bill would also require state police to report the volume of sexual assault evidence submitted, the rate of submission of evidence and a review of practices including collaboration with law enforcement and rape crisis centers.

It is similar to House Bill 1821 introduced in 2016 by then-Rep. Brandon Neuman and was referred to the house judiciary committee in January.

Other We the People reports:

Steve Polonus has an abiding interest in local sports.

Why no seat belts on buses? Do grocery stores get inspected like restaurants? [We the People]

Six years ago, Erin was a newly minted graduate of the School of the Art Institute of Chicago, working three part-time jobs and adjusting to l…

In what WellSpan Ephrata Community Hospital calls an enhancement of its services, eight of its nurses have completed SAFE training.

A Dubious Product: A Rape Kit For Home Use

Alongside other “essential” household supplies for sale on Amazon, there’s now a product offered that might give consumers pause: an at-home r…

The number of rape kits untested for more than one year — considered backlogged under state law — has fallen to 94 statewide, according to the…