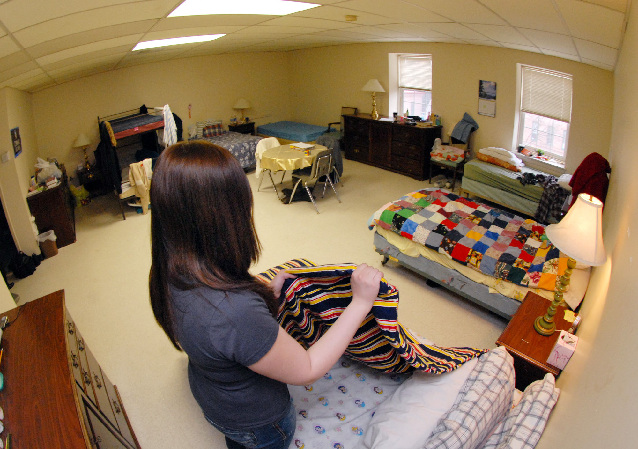 In this 209 file photo, a girl who was a senior at a suburban high school became homeless and was living at the Water Street Mission in Lancaster. (Andrew P. Blackburn) 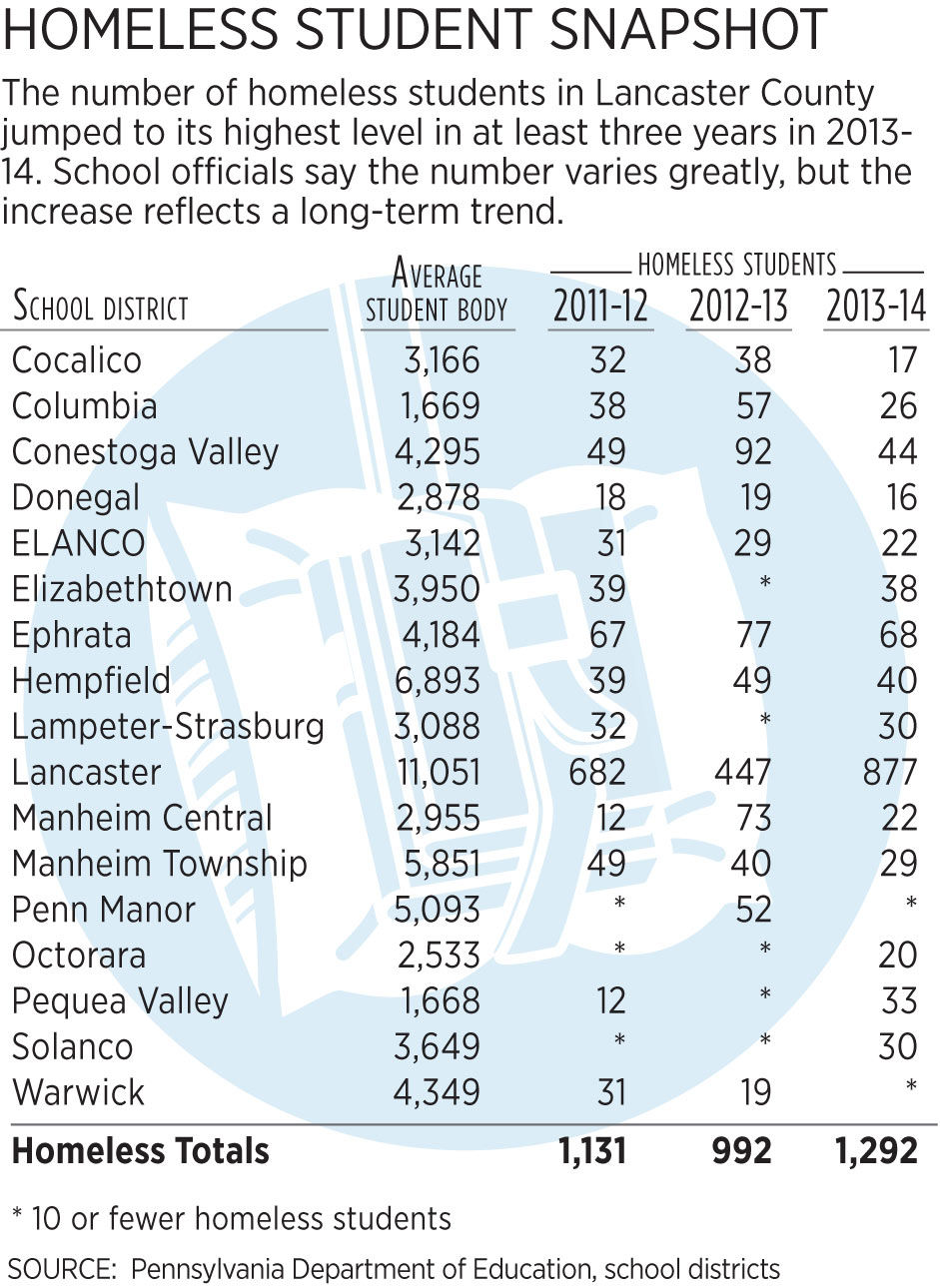 In this 209 file photo, a girl who was a senior at a suburban high school became homeless and was living at the Water Street Mission in Lancaster. (Andrew P. Blackburn)

They live in hotels, they’re doubled up with families and friends, they sleep in shelters or their cars.

They’re the homeless students who attend Lancaster County school districts, and their numbers are rising.

Data submitted by school districts to the Pennsylvania Department of Education shows 1,292 homeless students in Lancaster County school districts in the 2013-14 school year, the latest year for which statewide figures are available.

That’s a 30 percent jump over the 992 students reported the previous year.

Figures hard to pin down

Local school officials caution the figures can be misleading, even inaccurate. The number of homeless students in any district varies over the course of the year, as transient families move in and out. Some pupils may attend schools in two, three or more districts during the school year.

“Any number you see from the state represents a snapshot in time,” said April Hershey, superintendent of the Warwick School District, which counted fewer than 10 homeless students in 2013-14 — though it reported 31 students just two years earlier.

Numbers up around country

But while the numbers may vary from year to year, local educators say the unmistakable long-term trend is that there are more homeless kids, needing more help.

County school officials say they’re getting better at identifying homeless students. Yet the process remains imprecise; it may be impossible to identify all homeless kids, and get them the help they need.

For example, in the Hempfield School District, homeless students may be identified during the registration process, or by a guidance counselor or teacher, said Shaunte DePaso, the district’s coordinator of student services. Parents may call the school, the district’s homeless liaison or school social workers.

But unless the student or family discloses the information — or unless there’s a specific incident like a house fire — “we may not know that the family is displaced,” said DePaso.

Homelessness remains a pressing issue for the School District of Lancaster, where the 877 homeless students reported to the state in 2013-14 was the second-highest figure in the state, behind Philadelphia.

“We get a lot of referrals from shelters,” said Nicki Spann, coordinator of the district’s Homeless Student Project, which can provide bus passes and uniforms, school supplies and personal care items, along with referring families to social service agencies.

Other students are “doubling up,” living with family or friends, she said. The transience — “We've had families move five, six, seven times in a school year,” said Spann — can make it difficult to keep track of students and provide them with the help they may need.

“You may have a family of five staying at a relative’s house for a few weeks. Then they may stay at a hotel for a couple of days. At the extreme, some people may be staying in their car.”

In the Conestoga Valley School District, “we have one of the largest hotel populations due to Route 30” said Katie Reiff, school social worker. “We had one family move here from New York and moved into a hotel because it was the only place they could afford.”

In fact, many school officials say a lack of affordable housing is the biggest problem facing homeless students in their districts. “It’s not because they’re not working,” said the School District of Lancaster’s Spann. “They may have two jobs, they just don’t have enough money. Some places require two months (rent) for a security deposit. And the affordable housing that is available, many have waiting lists.”

The federal McKinney-Vento Homeless Education Assistance Act, part of the No Child Left Behind Act, mandates that school districts provide transportation to homeless students if they move to another district and wish to remain in their original school.

In Warwick, superintendent Hershey cited a November fire at a hotel near Brickerville that displaced several families who were living there. “They had to disperse to other school districts,” she said. “We have students in a Lancaster City shelter who continue to attend at Warwick, and we had to arrange to share costs  with the School District of Lancaster.”

Doing so, she said, “helps achieve stability for our kids.”

Even so, some studies show homeless students suffer at school. A 2012 report by Seattle University’s Project on Family Homelessness reported that half of all students who experience homelessness were held back at least one grade, are twice as likely to have learning disabilities and are three times as likely to have emotional disturbances as their classmates who aren’t homeless.